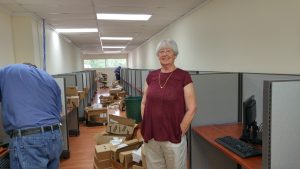 Kentucky is working on a multimillion-dollar plan to bring broadband internet to the eastern part of the state, home to some of the country’s most impoverished places. A federal report released this year found that from around a third to nearly half of rural residents in Kentucky, Ohio, and West Virginia lack high-speed internet and the job opportunities that come with it. But a few areas are ahead of the curve. In Kentucky’s Jackson and Owsley Counties, broadband has already arrived and is already creating jobs.

With a population of 1,095, Annville, Kentucky is one of the bigger towns in Jackson County. It’s surrounded by grassy fields and rolling hills, which are the inspiration for the county’s tourism slogan: “Where the Mountains and the Bluegrass Blend.”

It’s not easy to find a job in Jackson County. More than a quarter of the population lives below the poverty line. Most people who have jobs work outside the county. For Annville resident Alisha Tanfield those long, costly commutes made it hard to make ends meet. “After you pay gas, you’re not making anything,” she said. 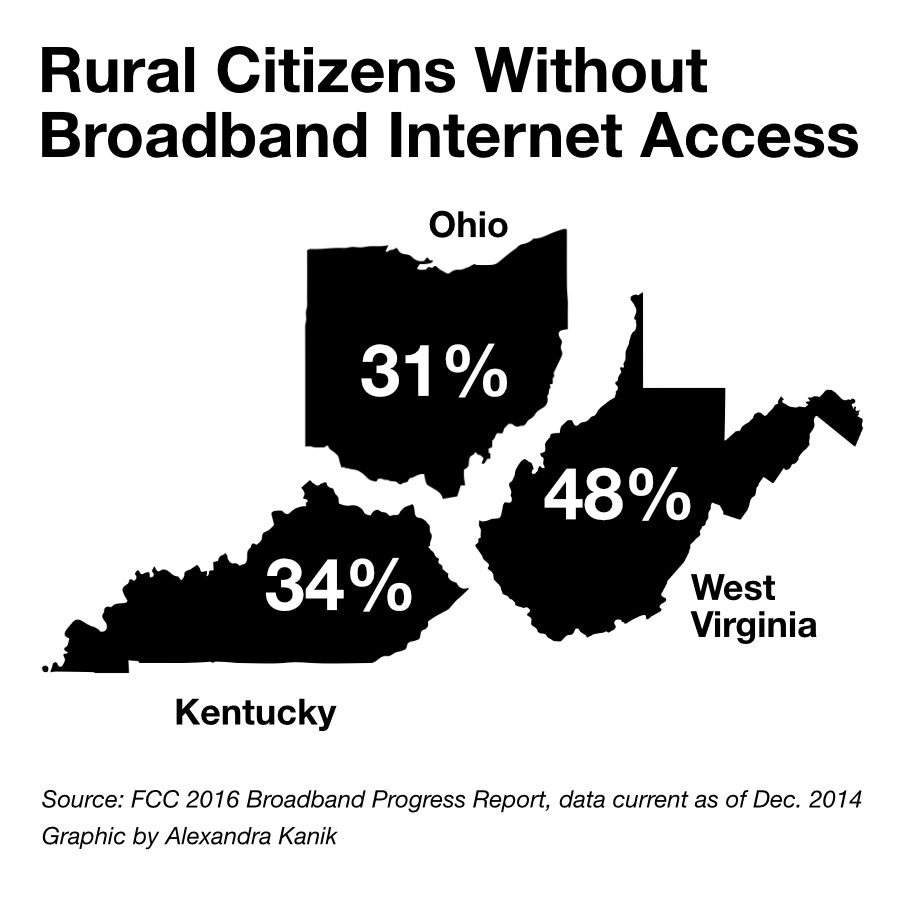 If you’re barely getting by and your livelihood depends on a long commute, car troubles can create a major crisis. When Tanfield’s car broke down she lost what income she had and found herself struggling to provide for her two daughters. Then Tanfield heard about a friend who had found a work-from-home job through the Teleworks USA job board. Tanfield says she’d always been curious about work-from-home jobs but hadn’t tried applying for any because she thought a lot of them are scams.

Teleworks USA is part of a federally-funded workforce development program based in eastern Kentucky. Its online job-board lists hundreds of vetted and verified postings for telework jobs— customer service positions that involve handling incoming calls (so, not telemarketing) and, the kicker is  these jobs can be done from home, as long as you have a good internet connection. 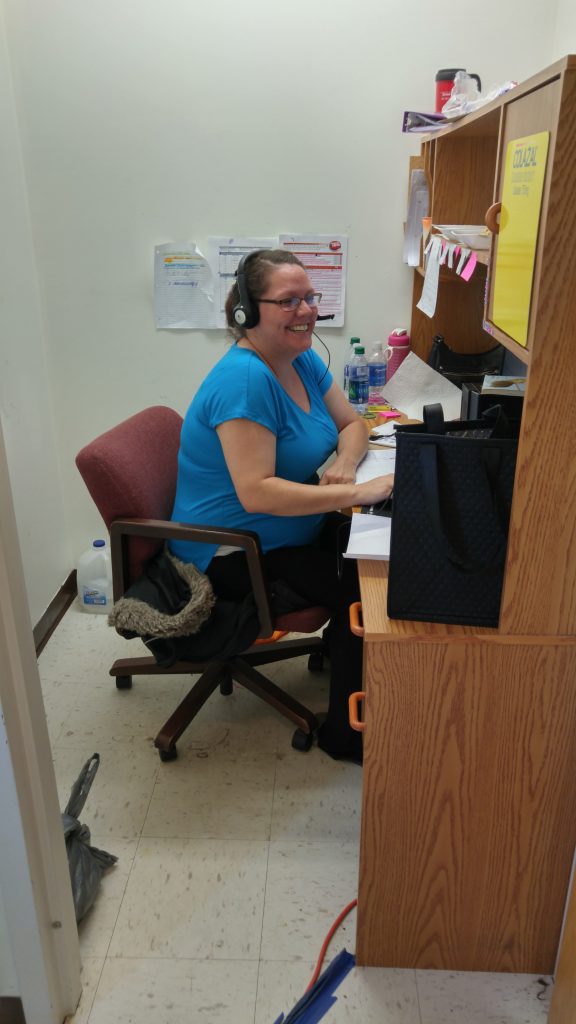 Teleworks USA also operates hubs like the one that opened three years ago in Annville. These brick-and-mortar locations offer training to help get and keep a telework job, and they also offer computers with headsets and a good internet connection. For people like Tanfield who find themselves without transportation or means for getting internet at home, a Teleworks hub provides all the resources to get a job and get back on your feet.

After a couple of trips to the Annville hub, Tanfield landed a job with 1-800 Flowers. For months she walked the 2 miles to work, even on the coldest winter days. With steady employment she was able to get a car and catch up on her bills. Then she was able to switch to a teleworks job with U-Haul. It’s part-time work but has higher pay and more flexible hours. You can tell how happy Tanfield is with her job by the amount she smiles and laughs when she talks about it. “I have a good paycheck, I have a car, my bills are paid, and I have money to go do stuff with my girls,” she said. “I love it!”

Tanfield just got internet installed at her home and that brings some new benefits. For one, there are no transportation costs. Also, Tanfield can watch her kids during the day, which means she doesn’t have to pay for childcare, and her husband—  who works night shifts—  can get some sleep. Plus, Tanfield said it’s become especially helpful that she can stay home because she’s pregnant with twins and her due-date is approaching. 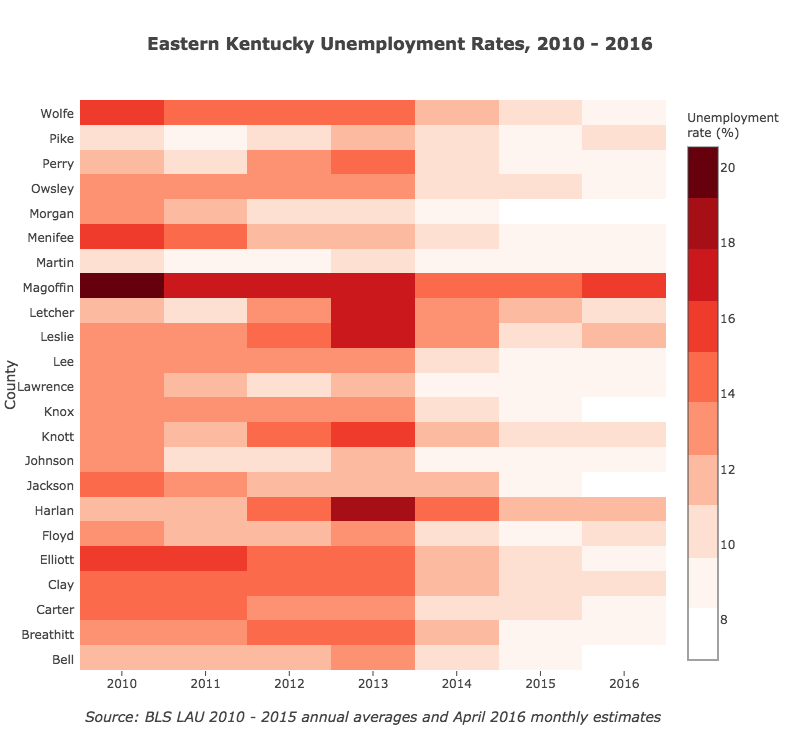 Working from home seems to make a huge difference in how teleworkers feel about their jobs. Tanfield said she once started job training at a call center. After spending a day sitting in a loud and crowded room with managers looking over her shoulder, she left and never came back. Betty Hays, an Annville native who is the operations manager for Teleworks USA, said you can see the difference in the retention rates. She said Teleworks USA has a 65 percent retention rate while the rate at a call center where she used to work was closer to 30 percent. She said, “It  was like a revolving door.”

In many rural areas it’s just not possible to do telework from home. These jobs require a strong internet connection, which 39 percent of rural residents in the U.S. don’t have. But Annville, the rest of Jackson County, and neighboring Owsley County all have an exceptionally strong internet connection. In 2015, a local telecom company finished connecting every home and business in the two counties to a high speed fiber-optic network. 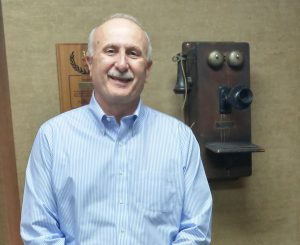 Keith Gabbard is the CEO of People’s Rural Telephone Cooperative, or PRTC. He said his company got help from federal loans and grants to complete the $50 million dollar project of connecting all of Jackson and Owsley Counties. That gave the two economically struggling counties internet that’s eight times faster than the national average.

“Instead of Jackson and Owsley County being behind others in roads and other things like we often are,” Gabbard said, “we’re sort of a little bit ahead of the game now.”

How does your internet connection measure up? Click to take a speed test.

The top-notch internet that PRTC brought to Jackson and Owsley counties has made it possible for Teleworks USA to help a lot of people like Tanfield. Teleworks USA has brought more than two-hundred jobs into Jackson County. “That’s probably the best example we have to show that the availability of high speed broadband is actually making a difference in the job market,” Gabbard said.

Owsley County is facing some even bigger economic struggles than Jackson County. It has an even higher unemployment rate at more than 9 percent. It also has the fifth-highest poverty rate in the United States and the third-lowest median household income. 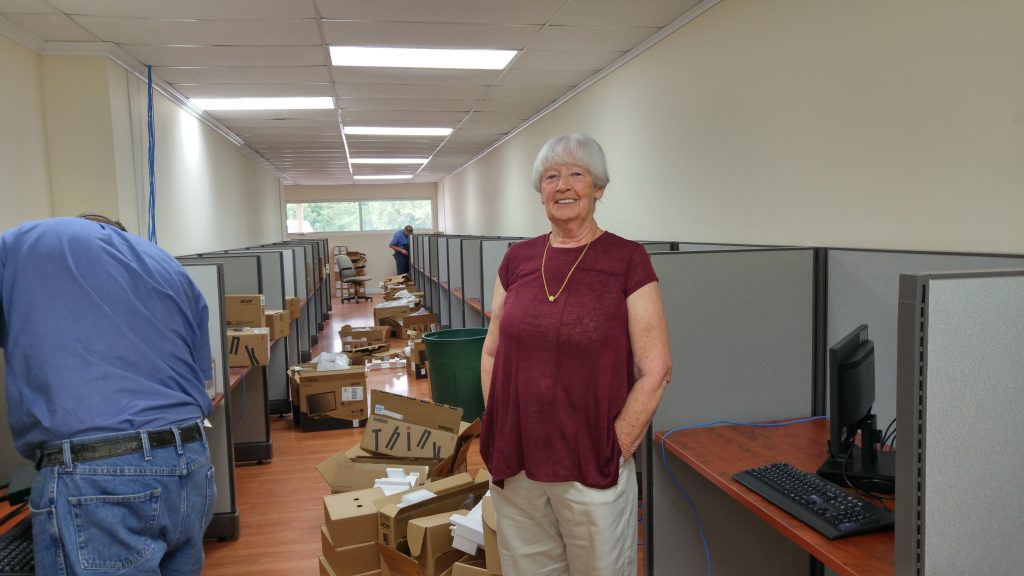 Owsley County has lost six percent of its population since 2010— the fourth-highest out-migration rate in Kentucky. Turner hopes Teleworks jobs will help people to stay where they’d prefer to live.

“You hear that all the time: ‘No jobs for me here, so I’m going to have to leave,’” she said. “But I want to see that if people are content to live a rural lifestyle that they be able to stay here and at the same time make a decent living.”

Given how things have played out for people like Alisha Tanfield, Turner’s hopes don’t seem so outlandish. Combining a strong internet connection and Teleworks USA might go a long way toward turning around the economy in rural areas like the hills of eastern Kentucky.