Pot Vs. Pills: Can Marijuana Help Cure The Opiate Crisis?

As the opioid epidemic continues to plague the Ohio Valley with addiction and death, the search for safer methods of pain management has become increasingly urgent.

Advocates for medical marijuana have recently made inroads in the area with growing scientific evidence that the substance currently considered of no medical value by the federal government might be a tool to wean those suffering from chronic pain off of more dangerous drugs. 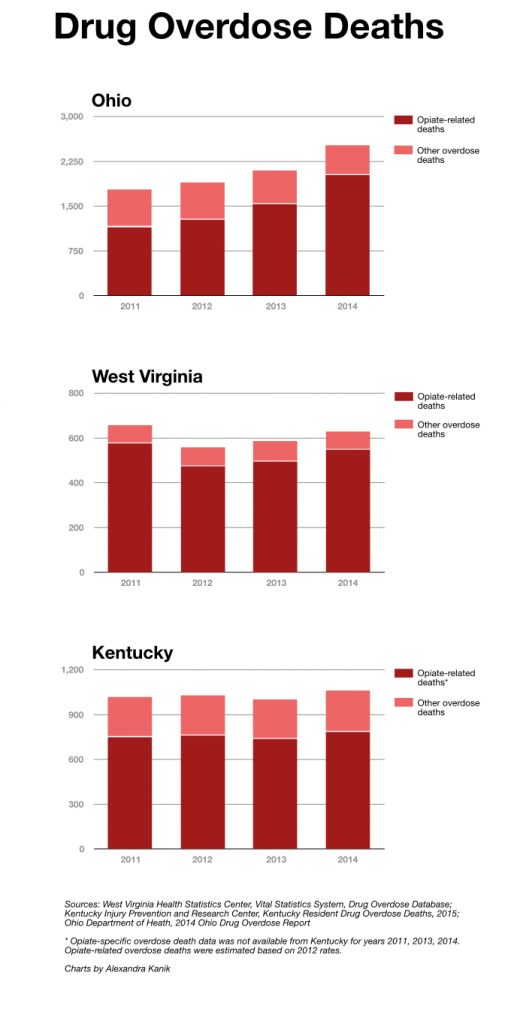 Part of the hope behind such proposals is to offer a safer alternative for chronic pain patients, who are often prescribed opioids. State health data show that in Kentucky, Ohio, and West Virginia, opioids were involved in at least 3,373 overdose deaths in 2014, the most recent year for which figures are available. The Centers for Disease Control found that in 2014 the three states were among the five states with the nation’s highest rates of drug overdose deaths, largely driven by opioids.

The continuing debate is over whether there’s scientific evidence to back up that hope or if it’s just a pipedream.

Joe Brumfield was 23 years old when he was diagnosed with limb-girdle muscular dystrophy, a disease which will make moving around progressively more painful.

To help manage the pain he was prescribed methadone, an opioid typically associated with treating addiction that can still result in a fatal overdose if misused.

He took the medication cautiously, fearing the rise in addiction and death tied to it, and soon after sought a safer alternative.

“Why am I putting my own health at risk, along with my family’s health, by taking these prescription medications when there’s a healthier, natural alternative?” Brumfield said. 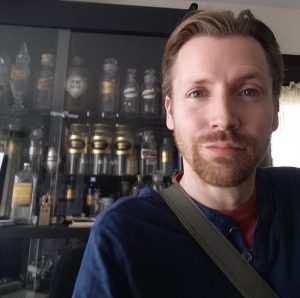 Muscular dystrophy patient Joe Brumfield wanted a safer alternative to the opioid painkillers he was prescribed.

Marijuana — or cannabis, as Brumfield and other advocates prefer to call it — was the alternative he chose. After years of personal research and use, he claims he was able to manage his symptoms while dialing back on the medications he considered risky.

“I was able to get off of three medicines,” he said. “The valium, the anti-inflammatory drugs and I was able to cut my pain medication dose in half.”

Brumfield, now 36, lives with his wife and daughter in Athens County, Ohio, and works as an artist.

He also works alongside advocates around the state and country who believe medical cannabis can help others wean off of opioids and be another tool in ending the epidemic.

A Search For Evidence

The scientific literature on medical marijuana deterring opioid abuse is thin. But recent research offers some support for Brumfield’s story.

One of the first study proponents point to was published in the October 2014 edition of JAMA, the Journal of the American Medical Association. Analysing the CDC’s death certificate data from when California enacted the country’s first medical marijuana law through 2010, researchers suggested states with medical marijuana laws averaged around 25 percent fewer fatal overdoses than if it did not have such legislation.

Dr. Marcus Bachhuber was lead author of that study and is an Assistant Medical Professor at the Montefiore Medical Center in New York City. He said the main point was to begin a broader conversation about treating pain.

“We were advocating for future research,” Bachuber said. “Looking at it for more years of data, looking at it in different ways by different groups of researchers to see if our findings held over time.”

Researchers picked up the proverbial ball and in July, 2015, the National Bureau of Economic Research put Bachhuber’s data to work. The NBER analysis found states with medical marijuana laws saw as much as a 35 percent drop in substance abuse treatment admissions and a 31 percent reduction in opioid overdoses.

However, expanding on the Bachhuber team’s finding, the study suggested the results were only possible if the state had legally protected dispensaries, implying that medical marijuana laws on their own are not enough.

More recently, a couple of studies have looked at opioid dosage and prescription numbers in states with medical marijuana laws.

A study from June’s Journal of Pain concluded cannabis use was “associated with 64% lower opioid use in patients with chronic pain” in Michigan. In this month’s Health Affairs, researchers looked at prescriptions filled for Medicare Part D enrollees from 2010 to 2013 and found that prescriptions for medications in which marijuana could serve as an alternative “fell slightly” in states with medical marijuana laws.

The latter two studies get at an aspect of the opioid epidemic that may not be at the forefront of the debate, according to Bachhuber.

“It’s not necessarily about clamping down on opioids as it may be about offering a wide variety of pain treatment and letting people choose safer options,” he said.

Getting people off opioids was part of the argument which helped Ohio’s medical marijuana bill pass. However, the bill’s lead sponsor urged people to not have unrealistic expectations.

“I don’t believe everybody is going to get off narcotics and get on medical marijuana,” Rep. Steve Huffman (R-District 80) said. “But I think it may be the right thing for certain people in a certain way.” 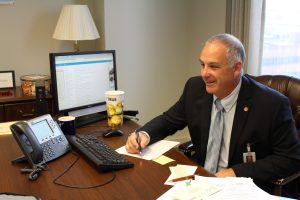 The first-term lawmaker never anticipated leading the charge for medical marijuana in his first term — or ever for that matter. But once tasked with leading a House committee on the topic, he found himself advocating for patient choice and talking with those opposed to the measure

The Ohio State Medical Association was one such group against the proposed legislation. The leadership’s concern was for the physicians they represent throughout the state dealing with a substance lacking FDA approval.

“We’re not completely comfortable with what sort of impact it may have from a medicinal standpoint on patients,” Reggie Fields, the association’s Communication and External Affairs Director said.

The organization became more comfortable with the bill only after certain safeguards were included, such as bans on smoking and home growing, and a provision that limits recommendations for marijuana use to  certified physicians with an ongoing patient relationship.

A mandate in the bill for the General Assembly to formally call on the federal government to reschedule marijuana from a Schedule I controlled substance to schedule two also intrigued the OSMA. If marijuana was reclassified to a Schedule II designation, less restrictive research could be conducted and the FDA would have permission to determine if it can be approved as medicine.

Huffman said he understands where the physicians are coming from. He’s an emergency room physician himself and does not anticipate being certified to recommend medical marijuana. However, as a lawmaker, he said medical marijuana is something citizens wanted.

He also believes the legislation is  a better alternative than the less restrictive plan proposed as a ballot initiative.  The group Ohioans for Medical Marijuana,, which had been pushing the initiative, suspended its campaign after the bill was passed.

“We’ll see how it plays out over the next year to 18 months,” Huffman said. “But I think it’s going to be ultimately the best for the patient and for all the citizens in the state of Ohio.”

Several states have marijuana ballot initiatives and legislation pending. Kentucky lawmakers are just beginning the debate on whether to draft legislation.

An interim joint committee heard from both sides of the debate during a hearing July 8 at the State Capitol.

The opposition’s arguments focused on the uncertainty over the complexity of medical marijuana — and how the “cannabinoids” within interact with receptors naturally in the body — and law enforcement fears that legal marijuana would reach an illegal market.

Proponents pointed to the mounting evidence –both scientific and anecdotal–indicating health benefits for an array of conditions and illnesses, with nearly no evidence suggesting use can result in a fatal overdose.

Proponents might find support from the governor’s office. At a debate at Eastern Kentucky University, then-candidate Matt Bevin said of marijuana that “There is unequivocal medical evidence … that there are benefits for those with cancer and epilepsy. It should be prescribed like any other prescription drug.”

Under the golden dome of West Virginia’s Capitol, medical marijuana laws have been proposed for years but have never made it much further than the introduction. However, the most recent iteration may indicate a growing bipartisan appetite for the idea, as it was sponsored by the Republican and Democratic leaders of the Senate.

Meanwhile, back in Ohio, it could be early 2018 before patients suffering from an approved condition can purchase cannabis legally at a dispensary.

The process of finalizing rules and certifying physicians, growers and dispensaries has proven to take time. In Maryland, licenses have still not been issued after voters approved a ballot initiative in 2014.

Joe Brumfield hopes to be in Ohio’s program, but isn’t sure how his application will go: Muscular dystrophy is not an approved condition, but chronic pain is.

“I will most definitely put myself through the ‘meat grinder’ of the process to be able to see how well this program works when it’s finally set up and how well it would work for people in worse situations or know less about it than I do,” he said.

His continued goal will be advocacy for fellow patients in states affected by the opioid epidemic looking for a safer alternative.

“My hope is that people will start looking at this, looking with new eyes,” he said. “We need to repeal prohibition again.”