A study of drinking water systems found 6 million Americans, including people in West Virginia, Kentucky, and Ohio, are living with drinking water containing chemicals linked to a host of health problems.

The Harvard Chan School of Public Health published research in the journal Environmental Science and Technology Letters that delves into thousands of drinking water samples from across the nation. Researchers looked for certain chemicals – called “perfluorinated” compounds – which are linked to cancer and other health problems. We’ve been using these chemicals for decades in food wrappers, clothing, carpets, and on nonstick pots and pans.

Researcher Laurel Schaider of the Silent Spring Institute in Newton, Massachusetts, noted where concentrations were highest, and what possible sources of contamination exist.

“We found that water supplies close to industry, airports, and wastewater treatment facilities were more likely to have perfluorinated chemicals,” she said.

Contamination of water supplies was most prevalent in 13 states including Ohio. Chemicals were also detectable in Kentucky as well as in West Virginia. 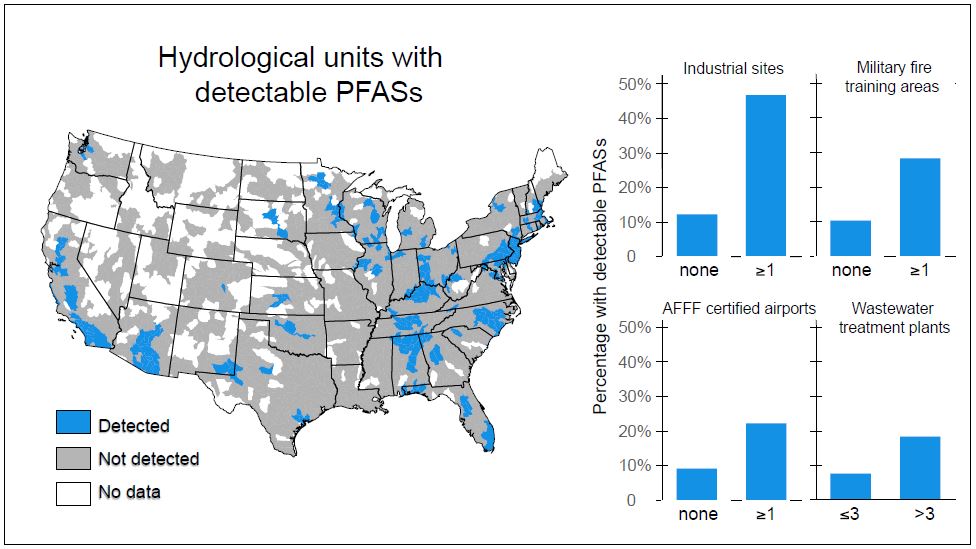 The Harvard T.H. Chan School of Public Health and the Harvard John A. Paulson School of Engineering and Applied Sciences

Schaider said a contamination incident in Ohio and West Virginia a decade ago first pointed to health concerns related to this class of chemicals. In 2005 it came to light that the chemical company DuPont contaminated water sources in the Ohio Valley with a perfluorinated chemical called “PFOA” or “C8”. A lawsuit on behalf of affected residents established a broad medical study, which Schaider says paved the way for further science.

“A lot of what we know about the human health effects of PFOA come from the Ohio River Valley and the C8 study,” she said. “Over 30,000 community members were involved in a health study and the results showed that there were six health effects that were linked to their PFOA exposure.”

Kidney and testicular cancer, pregnancy-induced hypertension, and thyroid disease are some of the maladies that were linked to exposure of PFOA.

A second Harvard study released together with the drinking water survey results builds on that growing body of research into health effects.

That study was led by Philippe Grandjean, who has become one of the foremost experts on health effects of these chemicals. Grandjean’s study looked at long-term effects of perfluorinated chemicals on the immune systems of exposed children. He said it takes years to pass the chemicals out of your system.

“Therefore it’s also plausible [that] while they harm the immune system today, they probably also will down the road, and that’s also what we found,” he said.

Seven years ago the federal Environmental Protection Agency issued a health advisory for anyone with short-term exposure to PFOA. The agency followed up this May with a long-term health. Towns across the country in states including Vermont, Alabama, Michigan, and West Virginia are all adjusting water systems to meet the new suggested threshold. Grandjean said the EPA’s advisory is a step in the right direction, but more action is required.

“The new water limits will essentially maintain status quo or if worse comes to worse, actually increase levels that are typical for Americans,” he explained. “If you drink that a lot of that water that is permissible, many Americans are likely to increase their body burden.”

In the Ohio Valley community of Vienna, West Virginia, residents like Dr. Paul Brooks have been living for decades with C8 levels in their drinking water above EPA’s long-term exposure health advisory. When EPA announced the advisory this summer, construction soon began to add filters to the local water system. Brooks said he still doesn’t trust the water or the EPA’s advisory.

“With the science that keeps coming out – it need to be a lot lower,” he said.

Dr. Brooks is a physician who helped set up the original C8 study in the area, drawing samples and taking health surveys from thousands of Ohio Valley residents.

“With as much saturation as we have here in the environment, engineers have already estimated it’s going to take 200 years of filtration to get it out of the water,” he said.

Brooks said health effects have been documented at levels lower than the EPA’s recommended standard. And for chronic exposure, he worries about how the chemical might build up, or bio-accumulate in the body. He uses an activated carbon filter in his home to filter out PFOA. Brooks said he thinks every drop of water in the region needs to be filtered.