Trade has emerged as a potent issue this election season, with the pending Trans-Pacific Partnership, or TPP, a flash point in the political debate. The stakes are high for the Ohio Valley region, where thousands of workers and billions of dollars in goods could be affected by the outcome of this trade agreement.

These businesses are just 30 miles from each other, but when it comes to their views on trade, they’re worlds apart. Their differences can tell us a lot about why trade is such a contentious issue and what it means for our region. 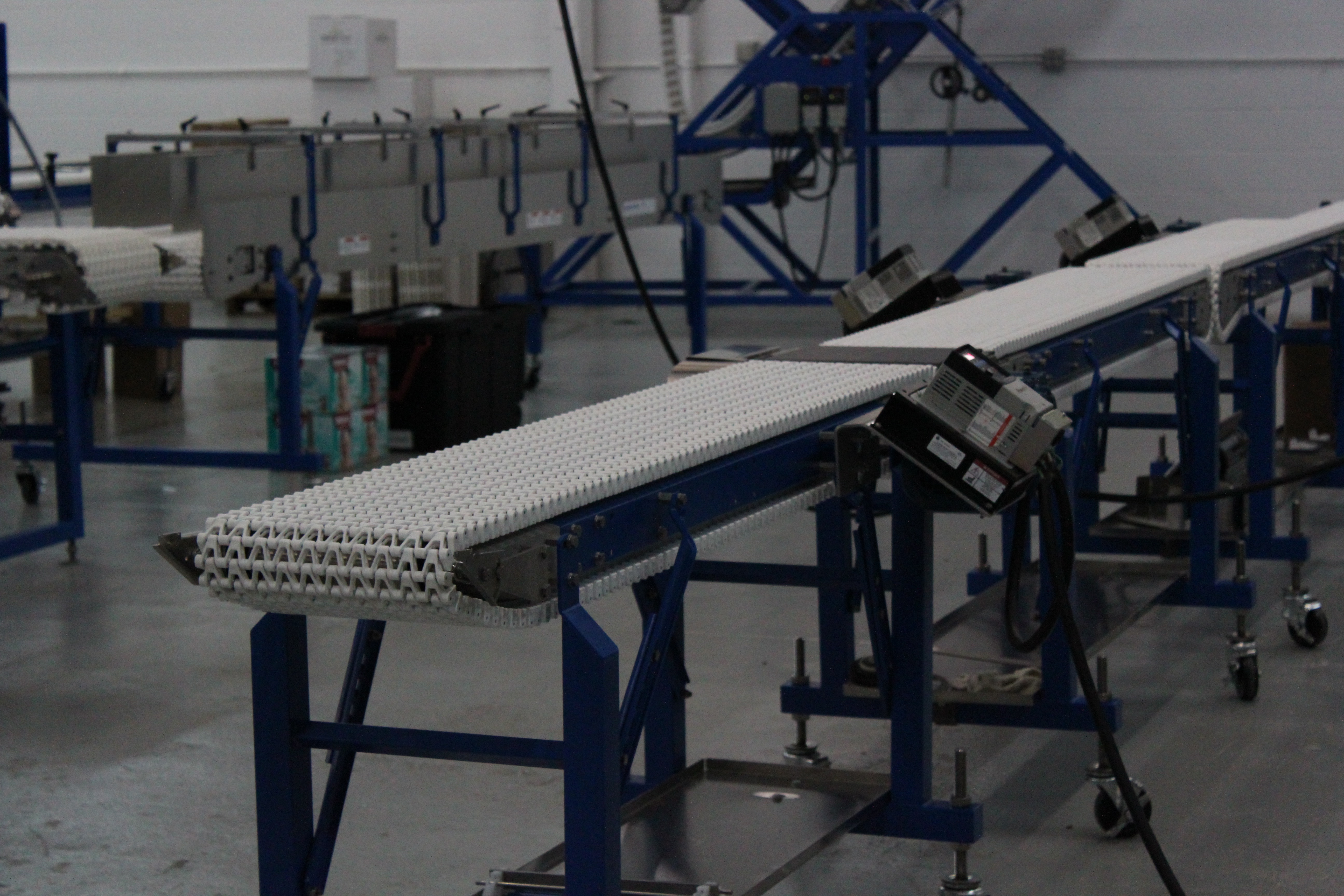 Span-Tech, in Glasgow, Kentucky, makes conveyor belts used in companies around the world.

Technicians at Span-Tech run conveyor belts to the breaking point as they test products at the Glasgow, Kentucky, facility. Span-Tech’s belts will go to customers in Canada, Mexico, China, and Japan. Trade accounts for about 20 percent of the company’s business, and founder and CEO Bud Layne hopes it could soon be even more with the TPP.

“I’ve traded in Asia for over 20 years and I think it’s something that we need to be part of,” Layne said. “It’s a huge growth area.”

Layne said trade deals lower the expense and challenges associated with exporting American made goods, helping companies like Span-Tech that provide equipment that other exporting and importing companies use. Data show that has a big effect on the region and the stakes are high for the TPP.

According to the pro-trade group Business Roundtable more than 195,000 Kentucky jobs are supported by trade with the 11 other countries that would be in the TPP. In Ohio it’s more than 50,000 jobs, and in West Virginia more than 70,000. The deal would remove thousands of taxes and tariffs associated with trading with these countries.

The Obama Administration spent five years negotiating the TPP with 11 other countries on four continents. It would be one of the biggest trade deals in recent memory, affecting agriculture, manufacturing, and even medicine. But shifting political fault lines have undermined the TPP’s chances of final approval.

As Obama’s presidency nears an end support for the TPP in Congress is weak and both major party candidates oppose it. Democratic nominee Hillary Clinton supported the deal in 2010 but has since changed her view, as she told a Michigan crowd last week.

Republican nominee Donald Trump has also spoken out against the TPP and other  trade deals, a sharp departure from the traditional Republican party position. Meanwhile, both candidates’ running mates have been strong proponents of free trade.

That leaves free trade fans such as Bud Layne without a clear champion in the election. Layne said most voters don’t appreciate trade’s far-reaching effects.

“I think the average voter sees to the end of his car hood. He sees what his immediate life is like. And in the past 15 years, that’s been tough for him,” Layne said. 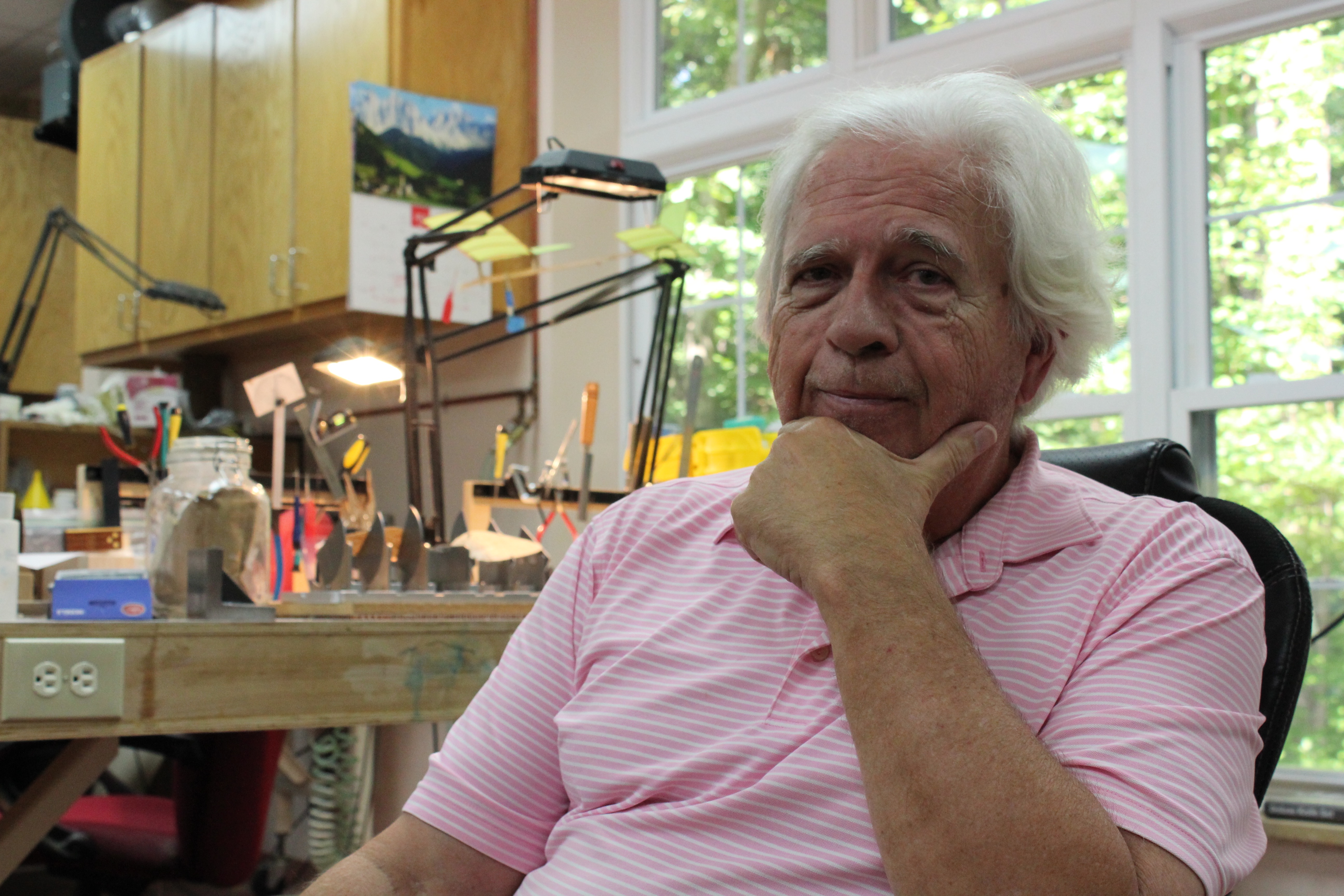 A recent poll shows that while the majority of registered voters say they don’t feel well-informed on the TPP, the more they learn about the agreement the more they support it. Overall, Americans tend to view trade positively. But lately more Trump supporters have told pollsters that they oppose trade agreements and blame free trade for lost jobs.

Layne said job losses in the region have less to do with trade than with changes in the workplace, such as new technology and automation. A section of Layne’s facility is dedicated to training and retraining workers. He said it’s the responsibility of the individual to adjust to changing times.

“What’s happened in America is that the common laborer is vanishing,” Layne said. “There are plenty of jobs if you’re willing to move upscale and re-educate yourself. What people hire people to do is changing.”

An Economist For TPP

Proponents like Layne say trade is a net job creator. Lowering trade barriers encourages industries and countries to specialize in what they do best. That filters down to the consumer in the form of cheaper goods. Western Kentucky University economist Brian Strow agrees, and said that while there are losers in any trade deal, the benefits outweigh the drawbacks.

“We do need to keep our eye on the larger picture here, which is lowering trade barriers around the world since World War II has been the single largest source of worldwide economic growth,” Strow said. “We don’t want to go back to Great Depression times where everyone was jacking up trade barriers.” 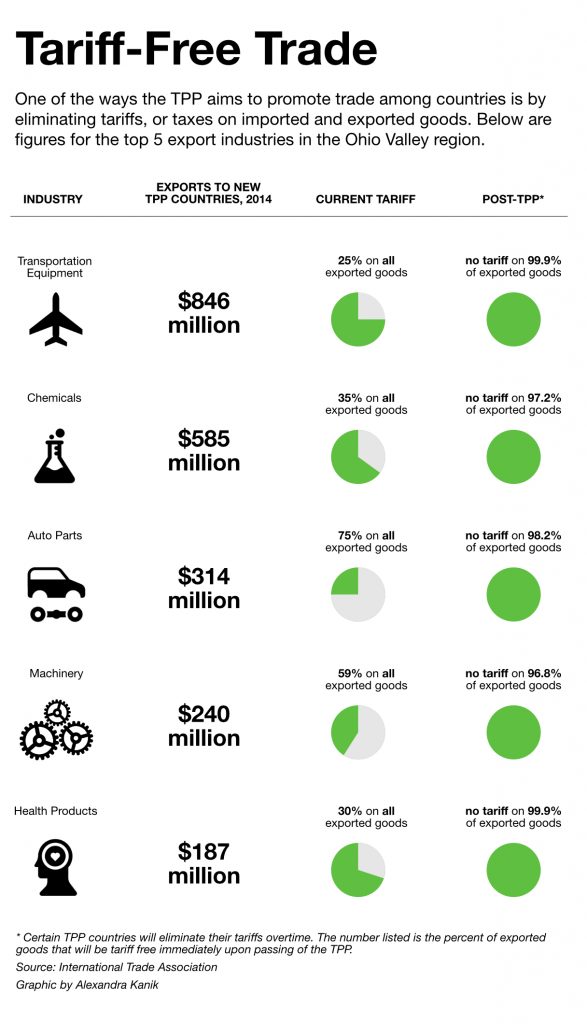 The U.S. Chamber of Commerce predicts that the TPP would create 700,000 new jobs in the U.S., and that more than 33,000 of those jobs would be in Kentucky, Ohio, and West Virginia.

Strow warned that if the U.S. doesn’t move forward with trade deals other countries are likely to put large taxes on imports and exports. He says it’s especially important for the region’s automotive industry to have as many free trade agreements as possible.

“If a car company is going to decide to set up a new production plant somewhere they’re only going to choose to do that in a country that has free trade agreements so they can export their cars as cheaply as possible to other countries,” Strow said.

Strow said if the U.S. misses out on the opportunity to influence the rules for trade with the TPP nations the U.S. economy will feel the backlash.

“In this particular case, Asia is such a growing economy that it would be a real shame for the U.S. to miss out on this opportunity to expand our ability to export our goods to such a big area,” Strow said. 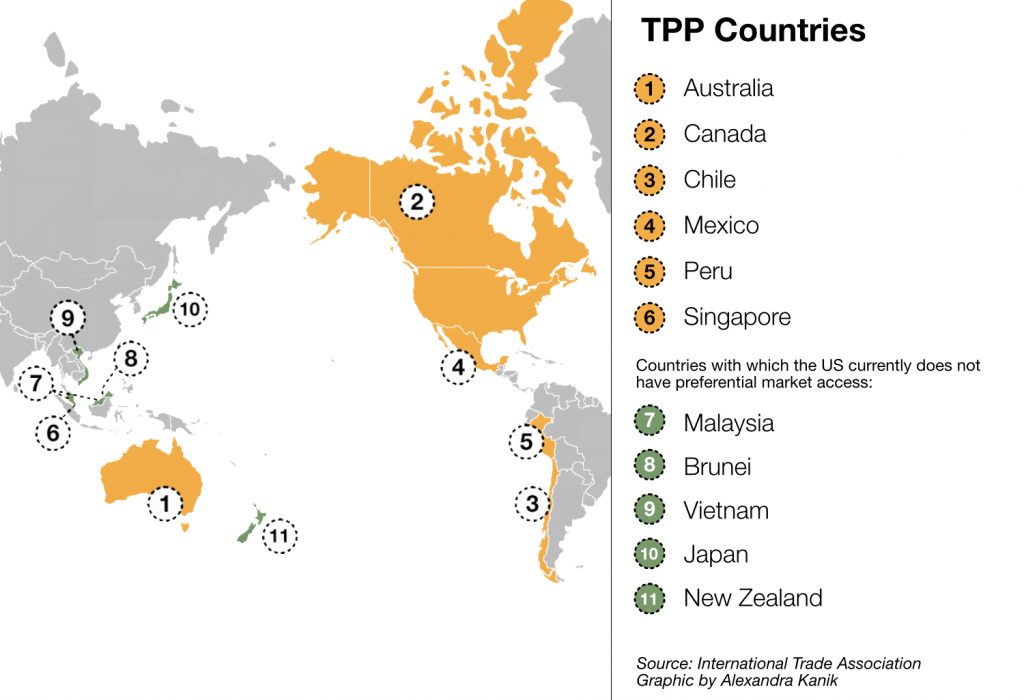 Strow acknowledges that trade deals aren’t perfect, and labor and environmental regulations are challenging. But he argues that being in the talks is better than opting out. As the saying goes, if you’re not at the table, you might end up on the menu. 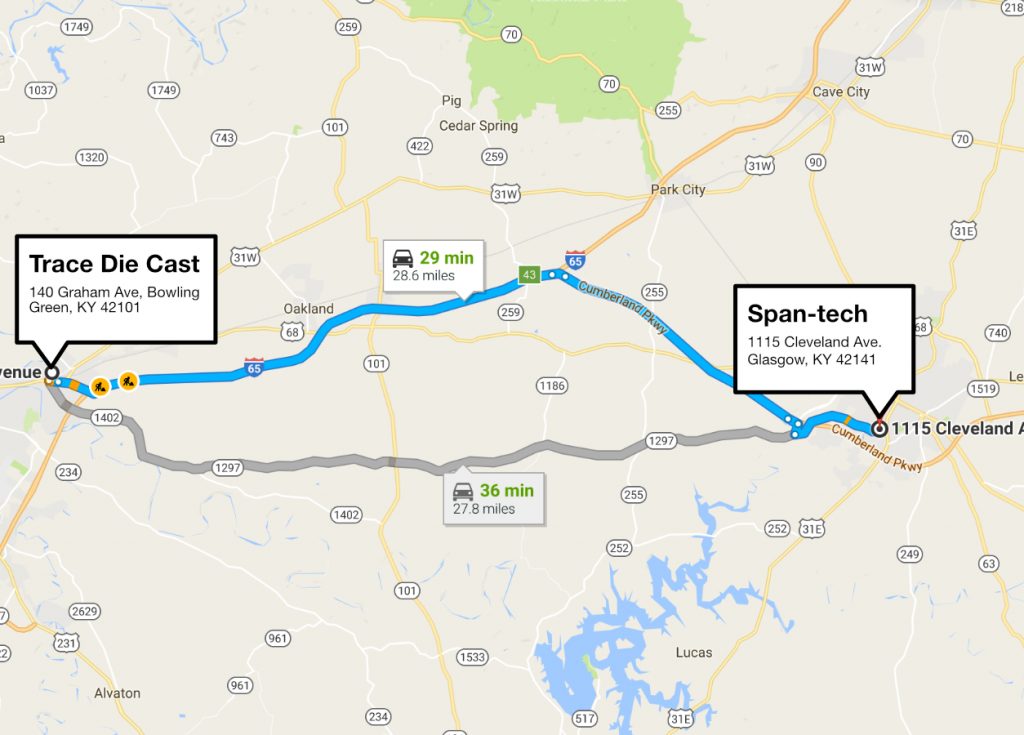 Just a 45-minute drive away from Span-Tech’s building, I found another business with a very different view on trade. At Trace Die Cast in Bowling Green I saw workers operate robotic arms that spray aluminum casts for auto parts.

The parts made here will go into the transmissions and engines of vehicles assembled at Ford and GM factories. Trace employs 550 people but these robots do the work three people used to do. Trace President Chris Guthrie says past trade agreements are part of the reason his company has had to find ways to do more with less labor.

“Trade is very important to us because it’s always a threat to us,” Guthrie said. “What we find is when there’s a trade pact passed it becomes much more difficult for us to operate and we have to learn to compete against low cost, low wage countries.” 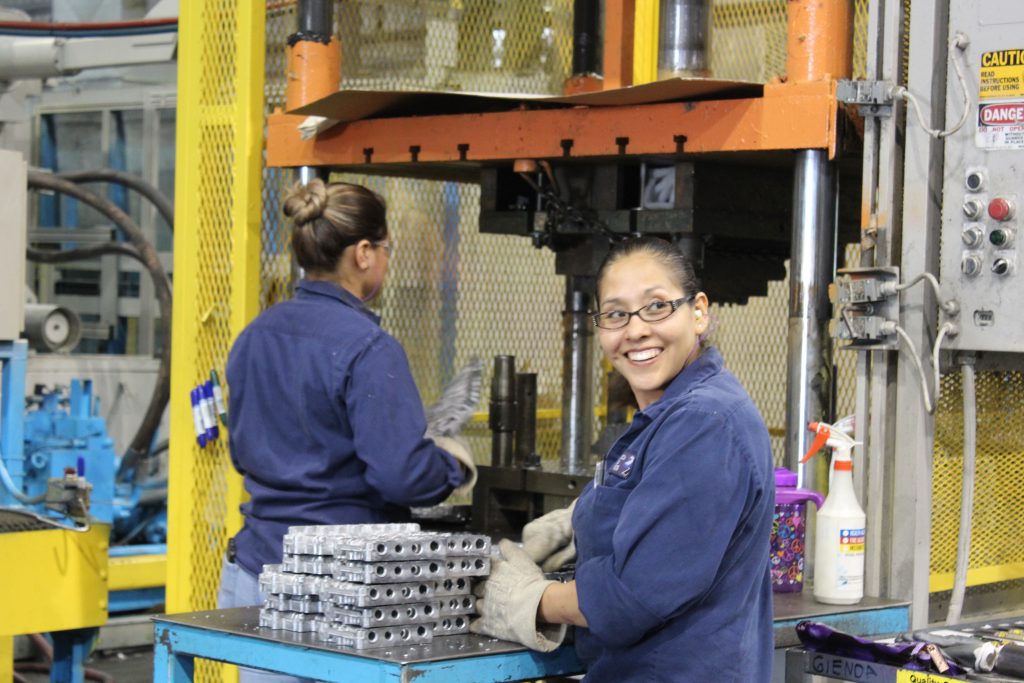 Guthrie said manufacturing in Kentucky is cheaper than in many other parts of the country because energy costs are low. But each trade agreement seems to squeeze his company a bit more. He says most trade deals look after the big global interests and not the small and mid-sized companies like his.

“We’re not waiting around for the government to either promote us or protect us,” Guthrie said. “Trade agreements are really for bigger companies.” 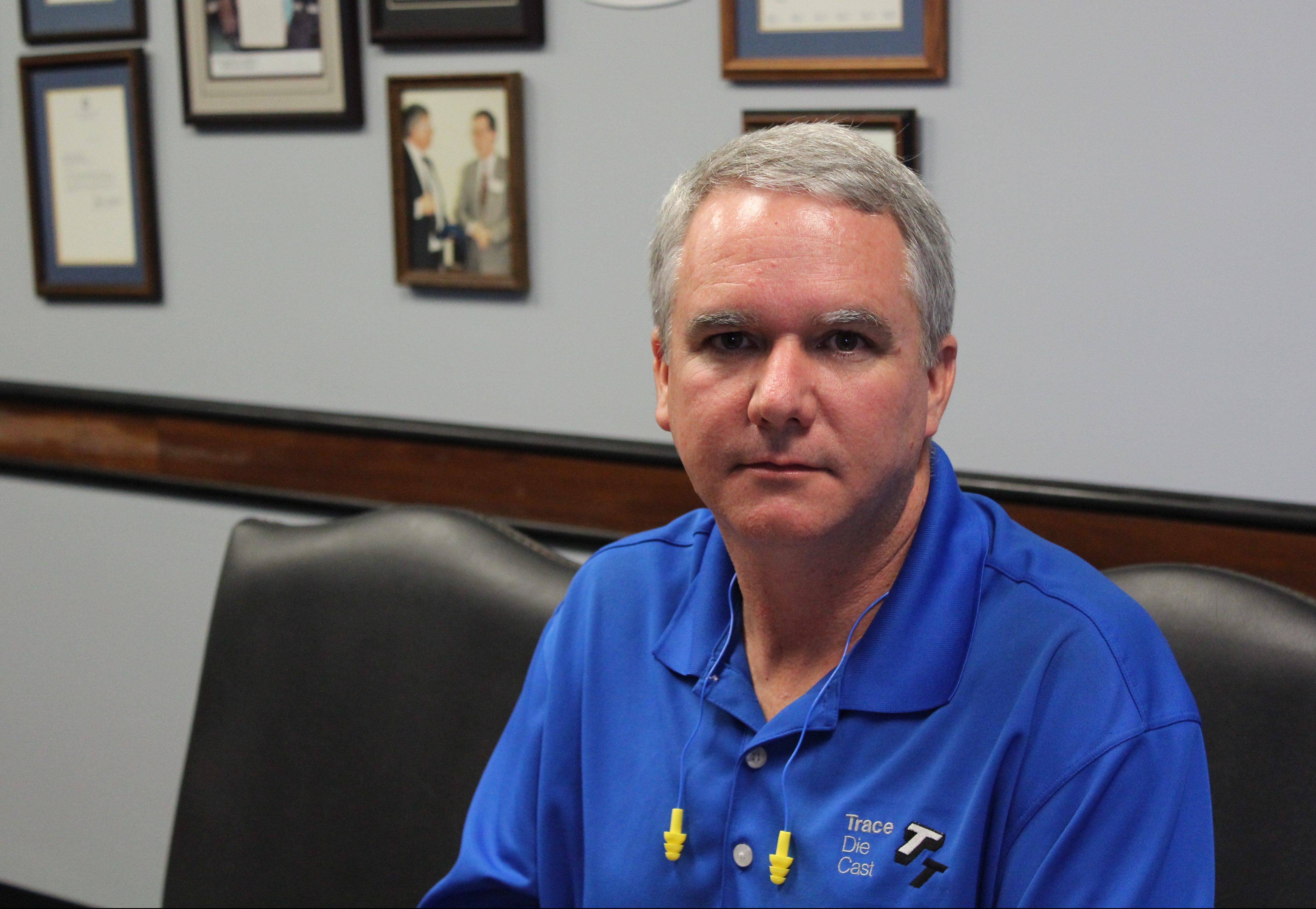 Since the North American Free Trade Agreement passed, more than 66,000 Kentucky workers qualified for a government assistance program for people displaced by trade. In Ohio more than 145,000 qualified, and in West Virginia more than 16,000.

Guthrie thinks voters are a lot smarter than politicians and industry leaders give them credit for. He says they understand that after NAFTA was passed prices went down for some products but their friends and family members lost jobs. 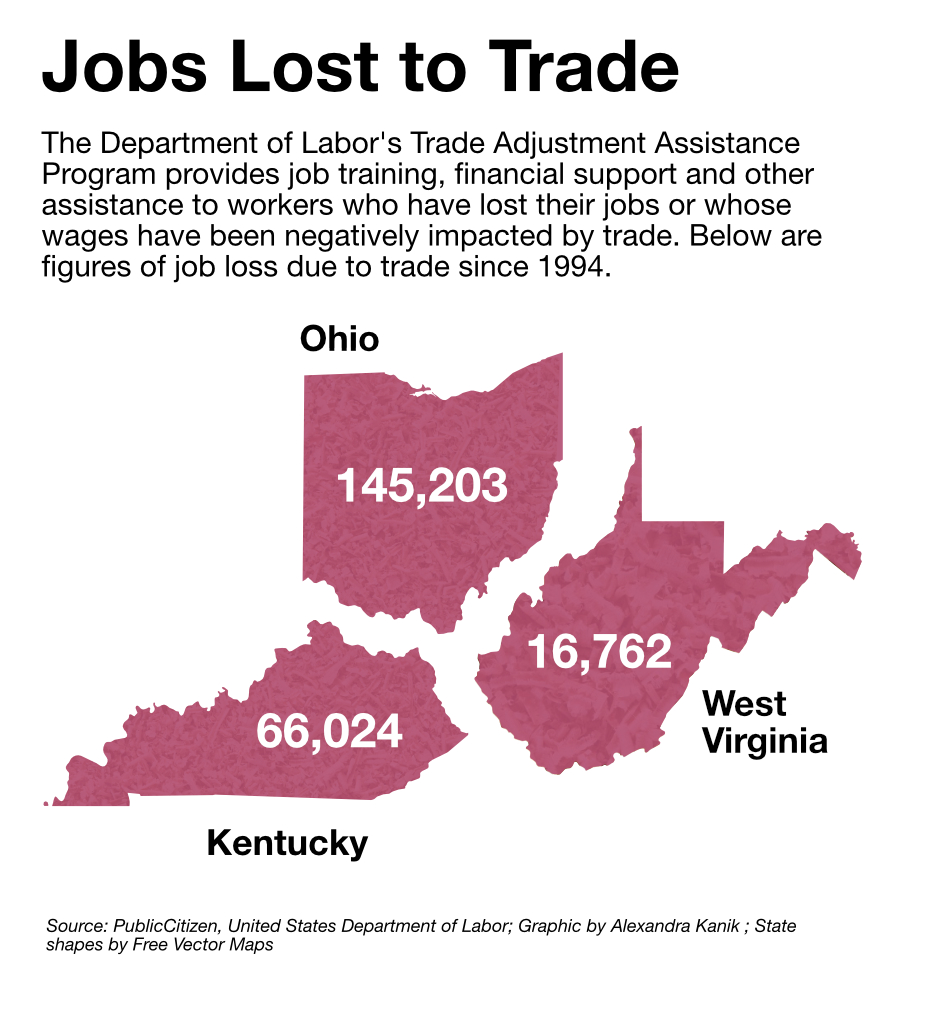 “They understand that after NAFTA a washing machine might be cheaper or clothes might be cheaper for them to purchase. But they also see what’s happened to communities throughout the Midwest that have lost companies that have moved to Mexico,” Guthrie said.

Guthrie worries that the next trade agreement could force him to compete with companies that don’t have to comply with the same environmental regulations his does. He said that if smaller operations such as his aren’t protected he’ll have no choice but to consider moving.

“People who work in factories that have now been located to low cost countries have been affected,” Guthrie said. “You have to have policies to help people like that go in a new direction in their lives.”

According to the United Steelworkers, some 60,000 manufacturing facilities have been shut down in the United States in the past 15 years. USW representative Donnie Blatt said the trade policies that have been negotiated since NAFTA have devastated the manufacturing base of the Ohio Valley.

“I’d love to take anybody through southeast Ohio, Steubenville, and the Youngstown area and let them see those communities and the effect that trade’s had on them,” Blatt said. 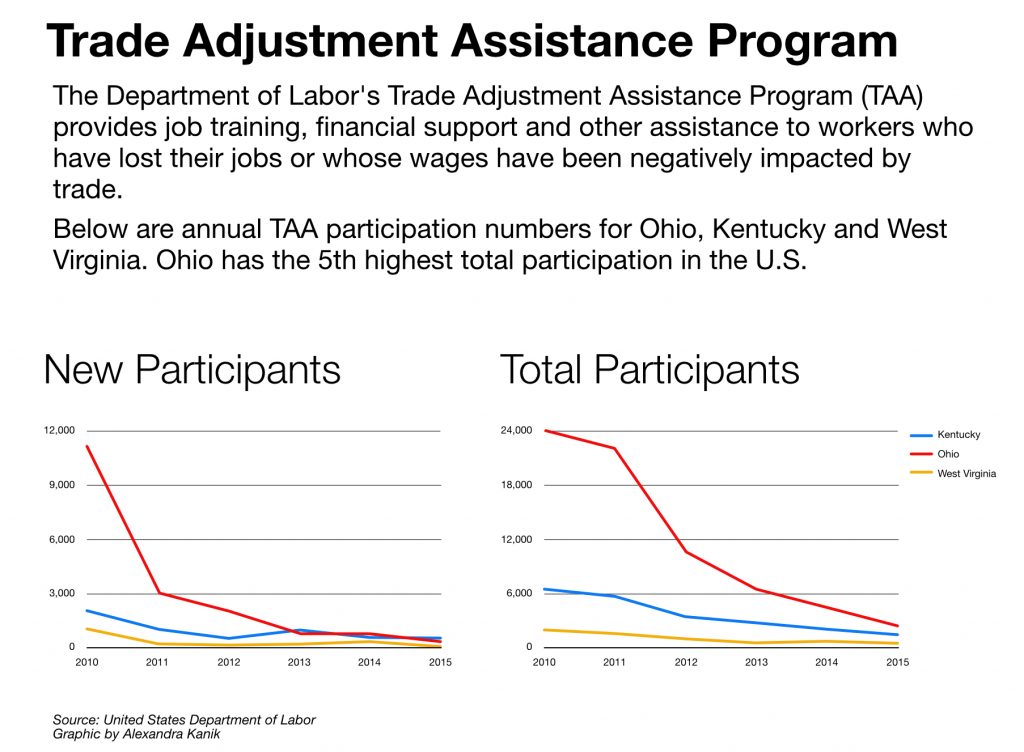 Blatt said there should be more enforcement of fair trade policies so that American workers aren’t pitted against countries that don’t allow their workers to organize and collectively bargain for a living wage.

“U.S. workers aren’t afraid of trade. We know if it’s fair that we can compete with anybody in the world,” Blatt said. “We just need to have an avenue that allows us to be able to have that level playing field.”

An Economist Against TPP

Kentucky Center for Economic Policy economist Jason Bailey agrees. He said the negative effects of trade have fallen disproportionately on workers and their communities.

“From an American worker’s perspective there’s no question that these trade deals have been a bad deal for their standard of living, for their family’s well being and that affects their entire communities when they have less money to spend,” Bailey said.

Bailey said the debate is not as simple as being for or against trade; it’s the specifics of the trade agreements that count. He argued that deals like the TPP put more emphasis on protecting copyright and patent law than they do on protecting average workers.

“There are specific people who lose when you have these sort of agreements and it’s most commonly everyday workers who lose out.”  Bailey said. “Who benefits is often powerful interests.” 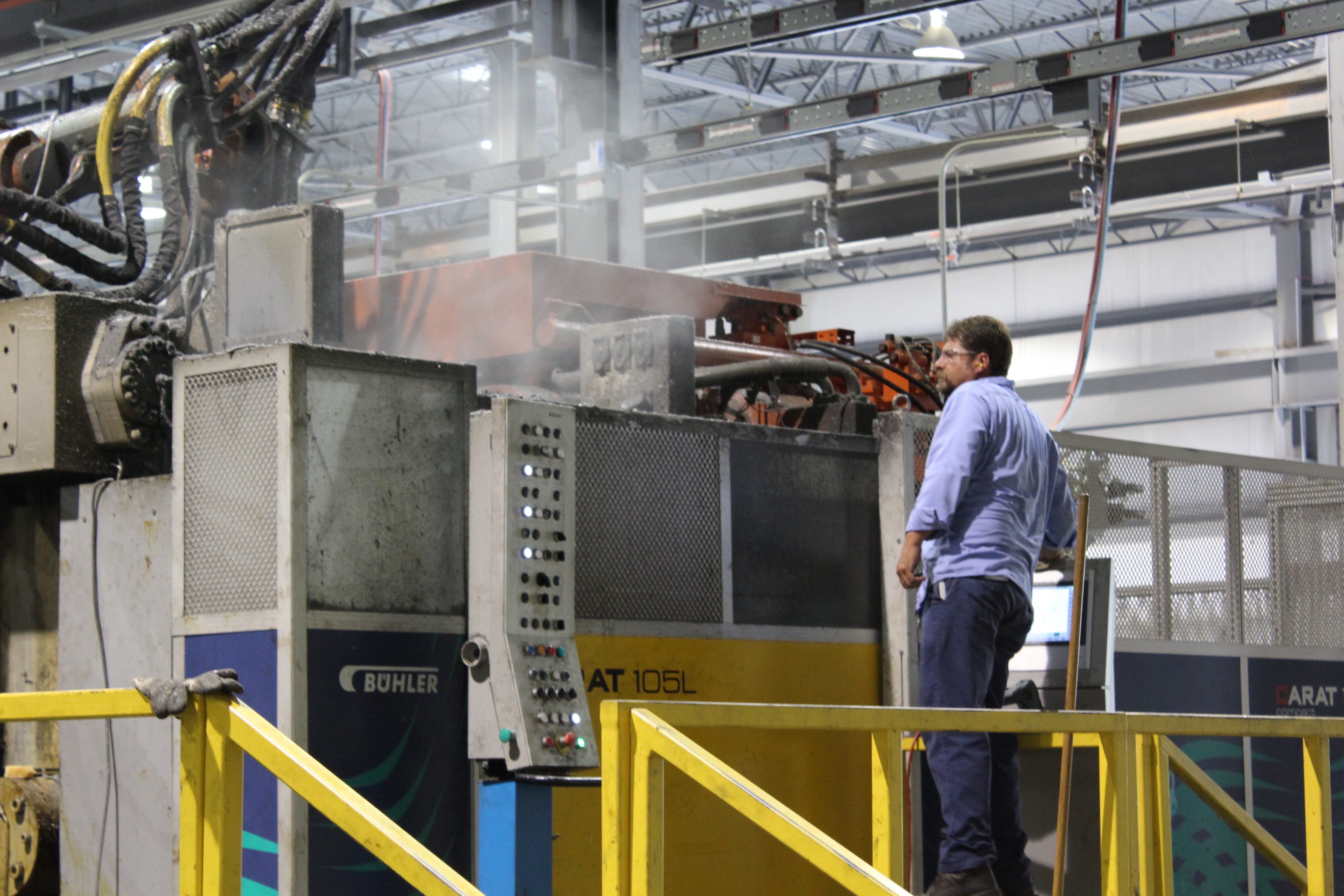 Displaced workers find it’s difficult to qualify for assistance programs and even when they do qualify studies show worker retraining programs are largely ineffective.

These two companies in the same community tell us a lot about the country’s polarized politics of trade.

Yes, trade deals are good for the overall economy, as Span-Tech’s Bud Layne points out. But Chris Guthrie at Trace Die Cast is also correct when he says those agreements harm some people and places.

And the evidence shows that the country does a poor job helping those who get hurt. As trade creates winners and losers, public resentment and division have become part of the deal and a big part of what’s driving our politics.