Grazing In The Grass: An Old-Fashioned Idea Holds New Promise For Sustainable Farming

On 120 acres in Marion, Kentucky, small-scale farmer Joseph Mast is taking an innovative approach to provide for his growing family of nine.

Mast belongs to an Amish community and is reluctant when it comes to media. He makes a concession, however, when the conversation involves sustainable farming.

Mast is a grass farmer using something called high intensity grazing, also known as rotational grazing. Herds of animals are left to graze on a small area of pasture, but moved several times a day to new forage, mimicking the way grasslands and grazers naturally interacted long ago.

Rotational grazing conflicts with conventional thinking on livestock and overgrazing. The theory has always been that too many animals on a plot will trample and destroy fertile grounds. But Mast sees evidence that the practice is working and he believes that his small farm is becoming a part of much larger solution for sustainable agriculture.

It’s a lot of work. Intensive grazing requires him to move his 20 cattle up to 6 times a day. But before Mast began this more intensive management style he was working even harder. Much of his energy was spent growing grain to feed his animals and earning additional income for medicine to treat livestock diseases such as foot rot, pink eye and worms. Since he began relying on his farm’s grasses, he says his cattle and land are more resilient to disease and drought.

“That drought we had in 2012, a lot of people were feeding hay, I never ran out of grass,” Mast said.

After the animals have eaten about half of the grasses in one area, they are moved to another. The grasses provide natural feed for the animals and their manure fertilizes the soil. The “hoof action” of the animals gently tramples the ground, increasing the soil’s ability to hold water.

As the livestock move along the grasses begin to grow again and their root systems do as well, locking into the ground and reducing erosion. The larger plants create a cover, sheltering the micro-organisms that feed off the manure. 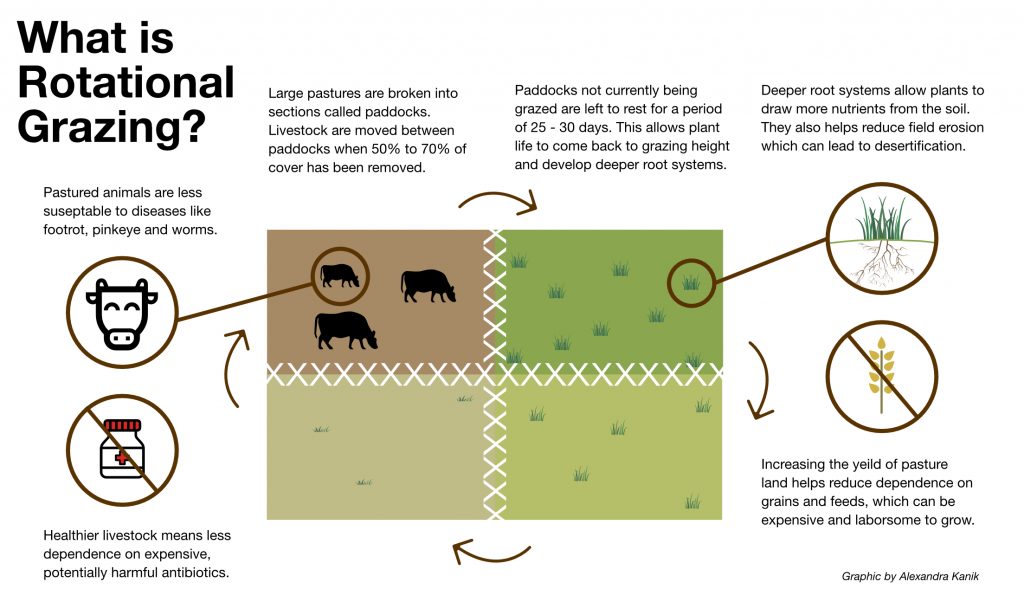 What was just dirt becomes healthy organic matter, soil that invites other beneficial organisms. Mast has found that this reduces his dependence on expensive medicine to treat livestock for things such as parasitic worms.

The dung beetle is just one part of a process in fly and parasite control. Dung beetles dry up manure patties that would otherwise be breeding grounds for fly larvae, which spread disease. Dry up the dung, you dry up the larvae.

“There are different kinds, there’s one called a roller,” Mast explained. He’s become a close observer of the tiniest parts of his farm’s ecosystem.“ They will take the fresh dung and roll up their egg and put it down that hole and that’s for their young to feed off. And if it rots down there, its fertilizer for the grass underneath,” he said.

Outstanding in His Field

When Mast looks out at his farm, he says the land speaks to him. It has always, but he hasn’t always understood.

“That’s the biggest issue, I mean it’s not easy. It’s a learning curve in this,” Mast said. “Years ago I wouldn’t see any of that [grass diversity] or I might not have been looking for them either. But, try to work with nature and she will work with you.”

Introducing other animals to the pasture helps too, because many harmful organisms only affect specific animals.

“If a cow eats a parasite from the sheep that’s the end to that thing, you see it doesn’t pass on through, it can’t multiply,” Mast said.

As Mast explores his farm, doing what he calls a “pasture walk,” he moves from plot to plot pointing out the growth in grass diversity.

Mast says the variety of grasses on his farm has increased with rotational grazing, benefiting his animals.

“Last week I was out in my field and come up with 15 different species of grasses without even trying to look,” he said. This diversity in grasses allows him to graze longer into the winter without feeding them hay.

Mast’s acreage isn’t limited to grasslands. Walk to the back of the farm and you will find 4 wooded acres, subdivided into 16 paddocks. He has sectioned off the forest to the hickory trees to work feeding his hogs.

“Something the hogs relish is the hickory nuts. They will crunch them down just like candy,” Mast said.

The hickory nuts and the grasses are all free. Like many small-scale farmers, Mast finds it tough to compete with the larger farms. Rotational grazing proponents argue that this approach can help level the playing field.

Mast’s hogs feed on hickory nuts in the wood lot.

Murray State University Animal Equine Science Chair O.L. Robertson became a “stockman” because he had grown up mostly raising tobacco on his family farm in west Tennessee. Pretty much anything is better than working in a tobacco patch, according to Robertson. That was around 60 years ago. Robertson said he didn’t become a real stockman until the last 15 years when he began paying attention to the interactions between the livestock and the plants they forage upon.

“Sometimes you have to look backward to be able to see forward, and the further back you can go the further forward you can see,” Robertson said in his gentle Kentucky drawl. “How we do things today, those animals aren’t capable of the migrations that they were in those days,” said Robertson.

Robertson is talking about prehistoric herds, like bison, that used to roam freely on prairies before the animals were hunted to near extinction and the land was divided by ownership. He believes it was those interactions among animals, plants, and soil interactions formed the deep, rich soils that we have available to us today. He is doing what he can to mimic those interactions via high intensity grazing with the hope of passing on the information to the next generation.

Robertson has been heavily influenced by another ecosystem grassland pioneer, Allan Savory. The South African born biologist has won wide acclaim for his idea that high intensity grazing is more than just sustainable farming, that it is actually a solution to climate change.

Robertson shows a video of a Savory TED Talk to his students each semester, in which Savory takes the grazing message to a much larger scale–fighting desertification, or the drying up of Earth’s soil. The United Nations says that the world is losing 57 acres of arable land to desertification every minute.

Savory believes that by replenishing the plant life with high intensity grazing, we are also able to trap carbon dioxide in the grassland roots, counteracting the climate-harming methane production associated with herds of livestock. In essence, using cows to combat climate change.

All of this raises a question: If this simple grazing practice is so beneficial at so many levels, why aren’t more people implementing the system?

“Rotational grazing is not something that grabs the attention of university researchers,” Robertson answered. He said part of the reason that there is not yet a robust body of science behind the idea is because academic study often follows available funding. “There is not a company that is really pushing this that is willing to put research dollars into a university to obtain the data,” he said.

Rotational grazing doesn’t require herbicides and pesticides that can be offered by a company looking for product support. That’s because the only thing needed to structure a rotational grazing pattern is some good polywire.

“We can take a 100 acres and split it up into 10 paddocks and we may even need to subdivide those paddocks, but we do that with one single strand of polywire,” Robertson said.

Farmers have enough to worry about competing in an already saturated market, explains Robertson, and eliminating costs by relying on resources that are readily available just makes sense.

“The easiest dollar you will ever make is the one you don’t spend,” said Robertson.

High intensity grazing isn’t high in spending. While it is viewed as labor intensive, Robertson and Mast say it’s really intensive management, respecting the animals and the earth by working smarter, not harder. It might even be saving the planet.

“Man has thought he was so smart, and that we don’t need all this, but actually we hurt ourselves if we try to work against nature,” Mast said.