Mount St. Joseph in Daviess County, Kentucky, may appear calm with the Green River flowing past  homes that dot the farmland here. But there is trouble in the air and it comes along with the smell of a large hog farm.

Sixty-three year old Jerry O’Bryan was born and raised on a farm in Daviess County. By the time he was 22 he had lost both parents and was left 150 acres to support his family.

“Back when I started there was two things that a young man with very little money could do to get started in agriculture, one of them was tobacco and the other one was hogs,” explained O’Bryan.

“This truck wash was built to counter the transmission of the PED virus, which is Porcine Epidemic Diarrhea. That wiped out about half of the western Kentucky pig herd here about two years ago,” Peters said.

Worried that polluted runoff from those trucks could reach other properties, some just 200 feet away, Peters is frustrated by what he sees as an abuse of a well-meaning law: the Right to Farm Law. He says O’Bryan shouldn’t have had the right to build the wash in the first place, but the dated language of the state’s Right to Farm law supported it by shielding the owner from legal challenge.

“They do not have the right to change the face of agriculture,” O’Bryan said of his neighbors.

Right To Farm, But Which Farms?

“We’re in total agreement with the Right to Farm Bill and its intended purpose,” Peters said. “But it has been hijacked and in this particular case being used as a screen to afford the particular operation to move into what would normally be considered a community,” said Peters.

Peters believes what’s happened in Daviess County could happen almost anywhere. Every state has some version of a Right to Farm statute and, like Kentucky, many have dated language. 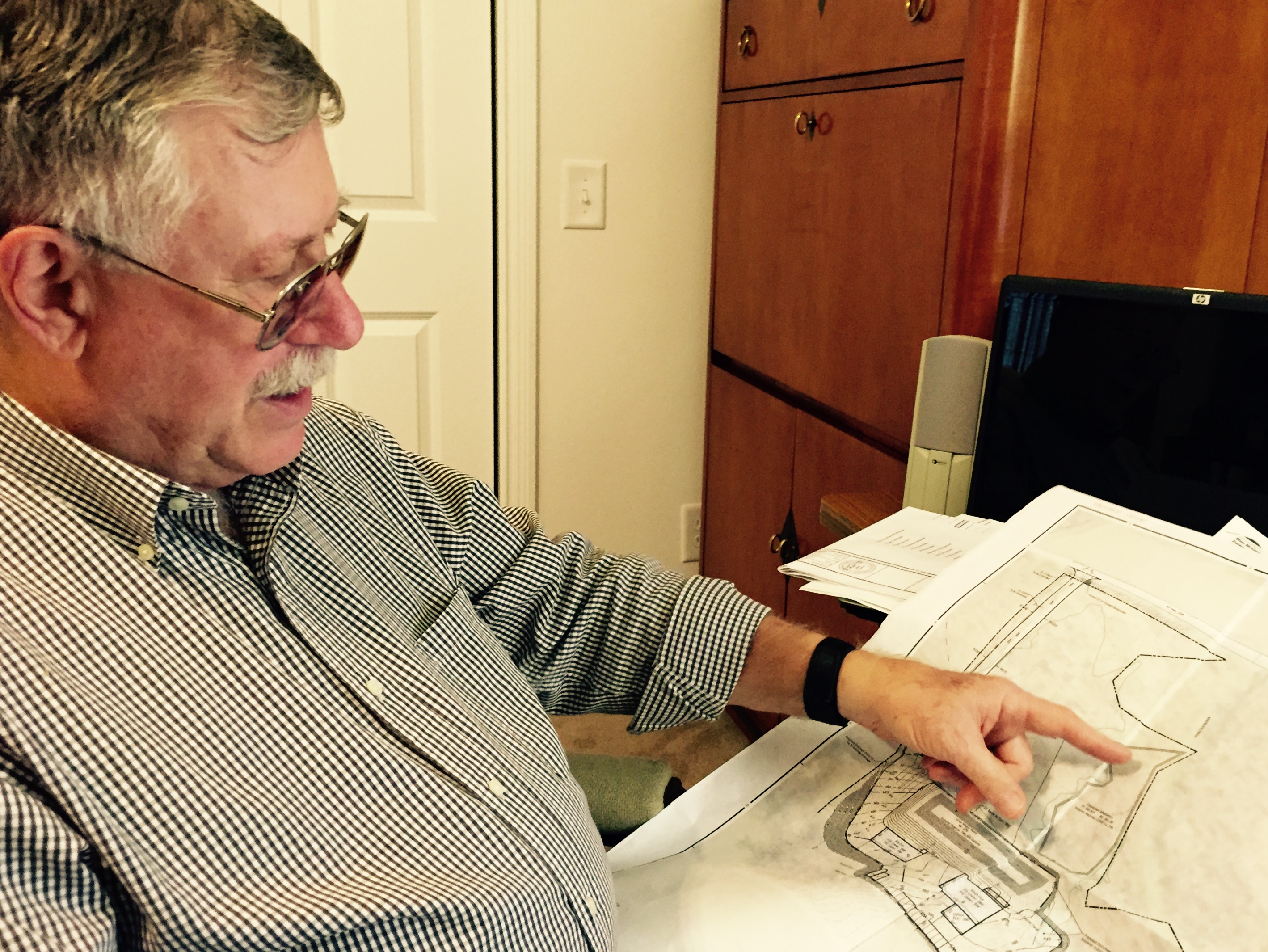 Rusty Rumley is a senior staff attorney at the National Agricultural Law Center. He says most statutes were implemented in the ‘70s and ‘80s to protect farmers from nuisance lawsuits long before the rise of many industrial-scale operations. [Story continues below graphic.] 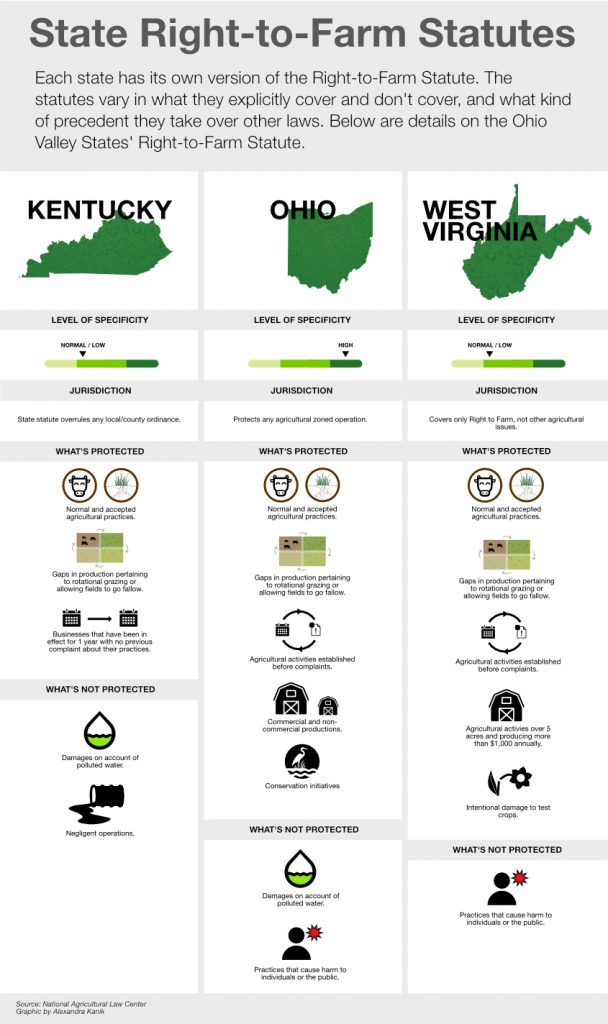 “Most of the states there is no reference to the [farm] size. Some of them have been updated since then, but for the most part, many of those laws are substantially on the books now as they were when they were originally enacted,” said Rumley.

Kentucky’s statute overrules any local or county ordinances with farms in operation for more than a year. Ohio’s statute protects industry in any agricultural zoned area that is in devoted exclusively to agricultural production three of the five calendar years.

Missouri and North Dakota  have recently added the Right to Farm to their constitution, placing farming on par with speech and religion and guns. Oklahoma is attempting the same with  question 777 on on the ballot for November 8, which is completely different from the old version, according to Rumley.

“This new version” he said,  would give Oklahoma farms the constitutional right to raise livestock without interference from future regulations by the state Legislature without a compelling state interest.

“The older Right to Farm Bills,” like Kentucky’s Rumley said, “strictly offer nuisance protection.”  While they have the same title legislation varies greatly from state to state.

Rumely said as a general rule of thumb,  “the more important agriculture is to the economy of the state the stronger the right to farm protection will generally be.”

Since a Right to Farm Bill was first passed in Kentucky in 1980, only once has a court publicly ruled on the statute. Jay Prather is a Lexington based lawyer that represented the plaintiff in Powell v Tosh, a case where a group of concerned citizens filed suit against a commercial hog operation. In the 2013 pretrial decision, the courts addressed the Right to Farm statute used as defense.

“The farm in question had only begun hog operations in the previous few years,” explained Prather. “All of the plaintiffs lived on their land before the hog operations began so the court ruled that the hog operation was not a pre-existing operation, even though the land had been used for farm land it had previously just been used to grow crops, and some small livestock, but not for industrial farming,” said Prather.

The Powell v Tosh case was a closed settlement and took place in district court, so Prather said it’s not binding on any future court decisions, but would certainly be persuasive.

Peters of CAPPAD hopes a lawmaker will amend Kentucky’s Right to Farm language to give existing communities protection as well as farms. But in an election year no one has offered to bring it to the legislature.

Kentucky Department of Agriculture Chief of Staff Keith Rogers said he has not been approached by CAPPAD on the issue but would be willing to sit down with the group, along with Agriculture Commissioner Ryan Quarles, to better understand the concerns.

If CAPPAD can not find a sponsor to amend the Kentucky Right to Farm statute, Rogers said “the KDA and Commissioner can propose legislation as needed to members of the general assembly.”

But changes in the law “sometimes takes years” Rogers said, because of the educational process and bringing a consensus together. Rogers believes the state will only hear more issues related to the statute.

“Agriculture has changed a great deal over the last 10 or 20 years and many of our farming operations have grown substantially,” Rogers said. “This may be one of those situations where it’s time to take a review of the Right to Farm Law.”

Rogers said the KDA will side with the farms as long as they are “good actors” or environmentally compliant.

“We’re in total agreement with the Right to Farm Bill and its intended purpose,” Peters said. “But it has been hijacked in this particular case.”

Peters said the environmental compliance issue is his greatest concern. He stood on his neighbor’s property line taking in the nearby truck wash. 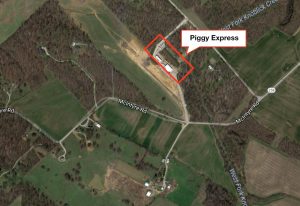 Since the wash began operations in February, Peters said appraisals of nearby homes show they have lost 15 to 30 percent of their value.

Rachel Foster, a property valuation administrator for the area confirmed the loss. She said two of those homes have appealed further depreciation because they feel the appraisal should have demonstrated a greater loss in value.

More than property value, Peters  is concerned about the impoundment used to store waste water from the trucks. O’Bryan calls it a “gray water pond.” Peters says it’s a “lagoon.” It’s an important distinction  because Kentucky’s Division of Water doesn’t regulate gray water, but they do regulate lagoons associated with the pork industry.

O’Bryan calls the wastewater impoundment at the wash a “gray water pond” because he believes a lagoon is “something that is getting a lot of nutrient load and this is not.”

Peters is worried about how O’Bryan will control the waste water levels.

Jerry O’Bryan said he looked for more than a year before deciding where to put the truck wash, he said it had to be far enough from the hogs to maintain proper biosecurity measures.

“We had to find something far away and we found this place and everything about it seemed to fit, I gave a lot of money for it, it’s about 3 miles away from our nearest hogs,” O’Bryan said.

O’Bryan maintains that his operation is business as usual and that the CAPPAD members are trying to change something they just don’t understand. And he has some pretty inflammatory words for his neighbors.

“Now I could get real radical and belligerent and say well they remind me of Muslims they come in and they want to change the culture,” O’Bryan said. “These are obviously Americans but they do not have the right to change the face of agriculture,” said O’Bryan.

O’Bryan says he has seen this all before. CAPPAD will grow tired of complaining and it will all go away. But Don Peters insists he is here to stay.

“Let me put it this way,” Peters said. “I’m going to die here. So I’ll fight it. I don’t have that many more years left.”