At the age of 38, a coal miner named Mackie Branham Jr. was diagnosed with progressive massive fibrosis, a debilitating and terminal form of an illness that was supposed to be a disease of the past — black lung. But Branham is among many miners afflicted by a resurgence in the disease, and officials are just beginning to realize the scope of the problem. A review of health clinic records shows roughly a thousand such cases, many times more than federal officials had thought existed. 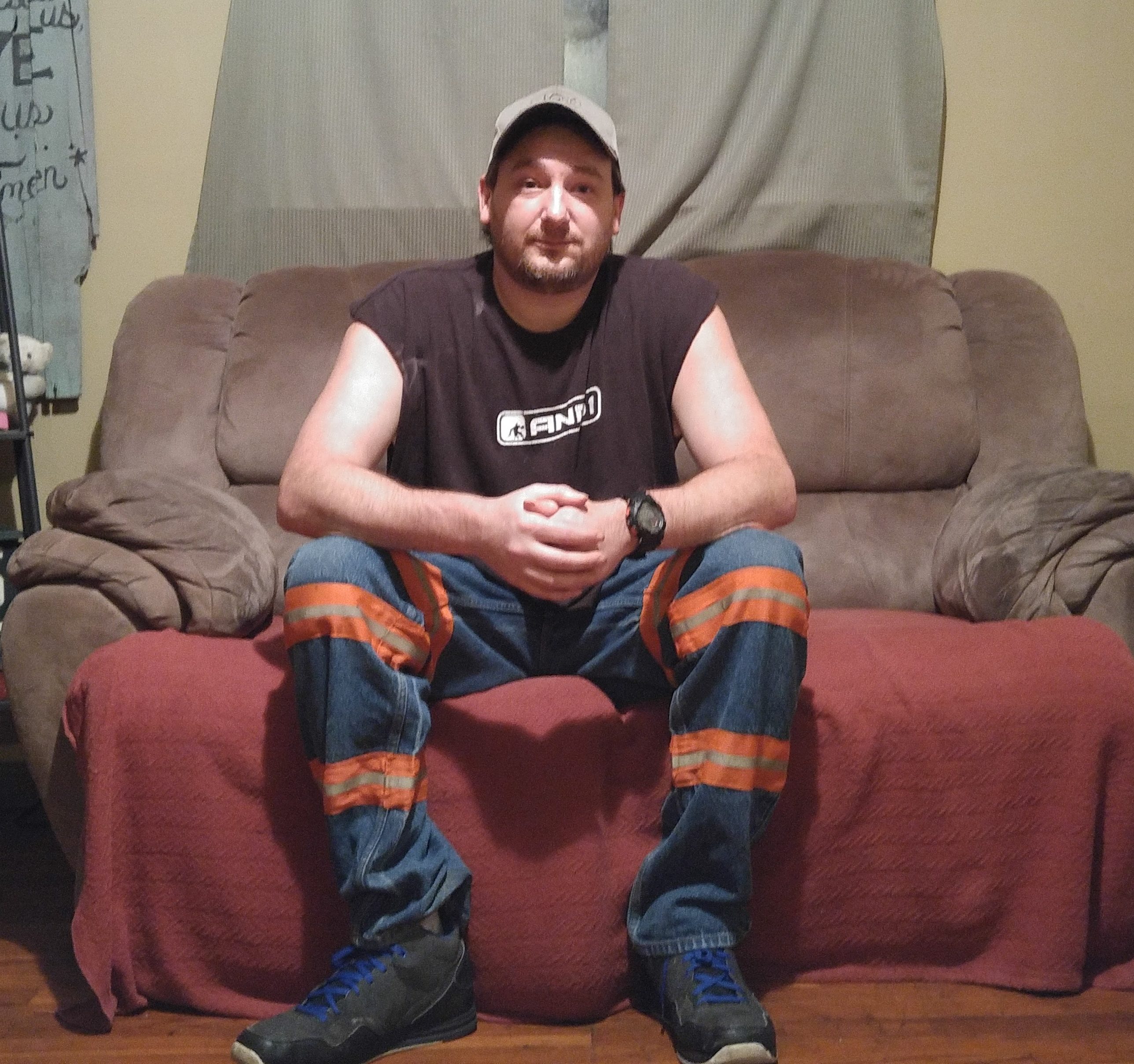 Mackie Branham, Jr., was diagnosed with the complex form of black lung at age 38.

“The more I talk, the more I get out of breath.”

Pike County is in the heart of the central Appalachian coalfields, and it’s home to the offices of Dr. James Brandon Crum, a radiologist who often reads the lung X-rays of coal miners. Last July, he reached out the National Institute of Occupational Safety and Health (NIOSH) because he’d noticed a disturbing trend among his patients.

According to a NIOSH study published this month, Crum found the worst form of black lung disease in 60 patients in a period of 20 months. That’s more cases than the NIOSH black lung surveillance program had identified nationwide since 2010.

One of the study’s co-authors, NIOSH epidemiologist Scott Laney, described the rate of severe black lung at Crum’s clinic as “unprecedented by any historical standard.”

Mackie Branham Jr. is one of the 60. An X-ray of his lungs shows that they’re littered with dark splotches, the scar tissue that’s built up around deposits of coal and rock dust. With his diagnosis, Branham was told he couldn’t go back to working in the coal mines. That meant no more paychecks and the beginning of an extremely difficult period for Branham’s family. 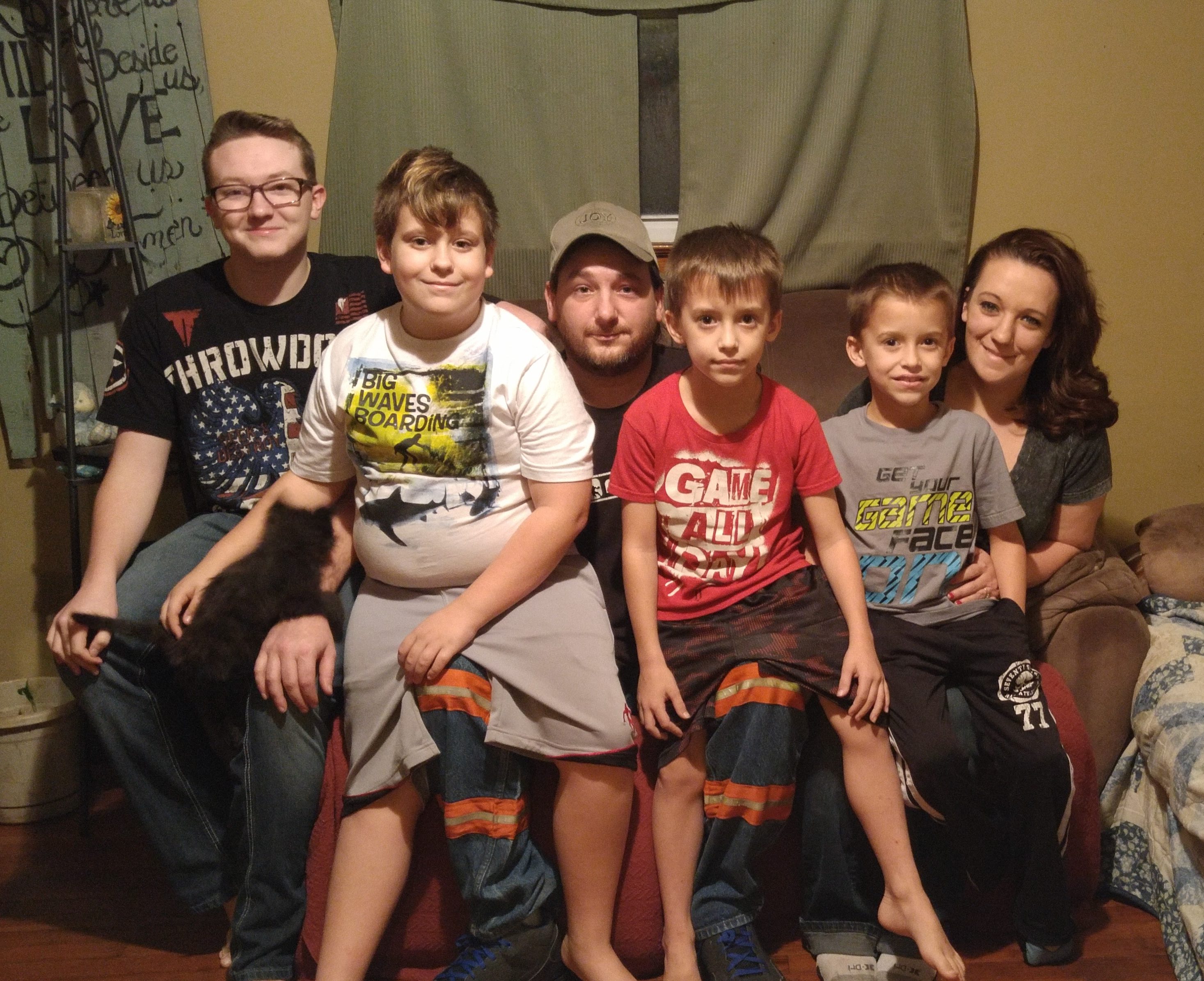 “I can no longer provide for my family.”

Branham’s work-history lines up with many of the reasons the NIOSH study suggests could be causing the uptick in severe black lung in younger miners. As a self-described “company man,” Branham did whatever the company asked, and that often meant extremely long hours. He often missed birthdays and holidays to pick up extra shifts. He’d sometimes work more than 24 hours straight. Longer hours likely go part of the way to explaining how a 38-year-old can have lungs worse than many retired miners.

The NIOSH report suggests another piece of the puzzle could be the popularity of a technique called slope mining, which involves making a long cut through rock in order to reach a coal seam. In central Appalachia, this usually means cutting through sandstone. Sandstone breaks down into silica dust, which can be much more harmful than coal dust. Branham said he once spent six straight months making this kind of cut, regularly working shifts as long as 16 hours.

The report also suggests that the recent downsizing of the Appalachian coal industry could be playing a major role in this new spike of diagnoses. In today’s coal landscape, laid-off miners have little hope of getting rehired, and that’s created a new incentive for miners to get tested and apply for benefits.

Branham’s black lung is so severe that he wouldn’t be able to work even if there were mines hiring. But he said he’s also affected by the continuing layoffs. As he sees it, laid-off miners have few options besides applying for black lung benefits, and that flood of claims has put him further down the list, forcing him to wait longer before he can hope to receive benefits. 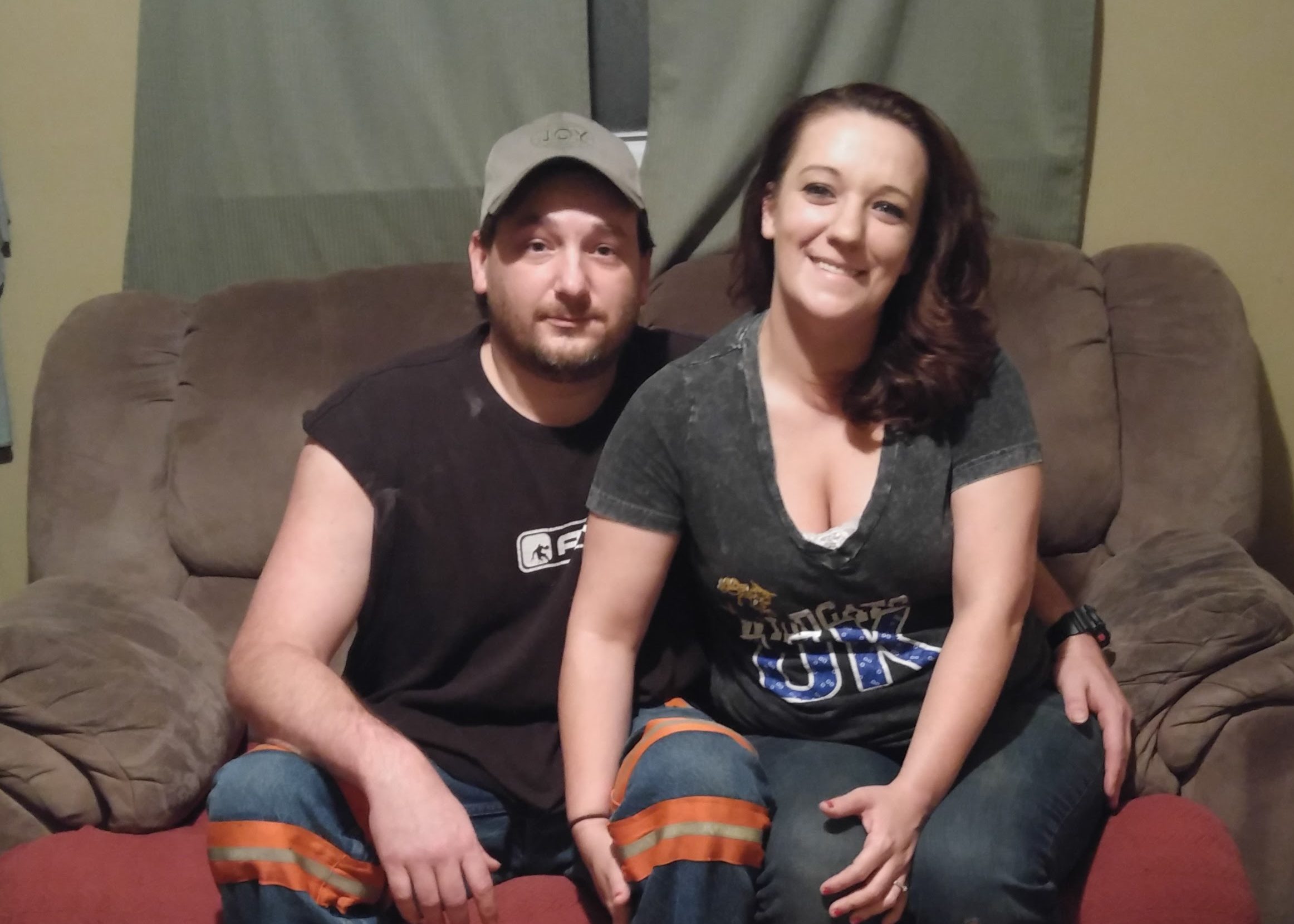 “I make in a week what he made in two days.”

Mackie Branham Jr. lives with his wife Amber and their five children. The family has a lawyer, and has been fighting for benefits since March, but they’ve not yet seen a dime. Branham says that his former employer, Alpha Natural Resources, has been fighting him every step of the way.

Coal companies have long been notoriously aggressive in fighting black lung claims. Branham’s condition is pretty clear-cut since he’s disabled and isn’t a smoker. But he still had to get opinions from seven doctors to make it through the process. In the meantime, it’s been hard for his family to get by. He tried to get government benefits, but was turned down for both unemployment and disability. His wife has been working over 60 hours a week as a waitress, and yet Branham said he’d likely be homeless if not for help from his family and a very kind landlord.

“More severe black lung than even our worst nightmares.”

The NIOSH study found 60 cases of the worst form of black lung diagnosed at Dr. Crum’s clinic since 2015, and characterized that as a “resurgence.” With help from the ReSource, NPR found 392 additional cases in the same period at clinics across the region. Clinics noted over a thousand cases since 2010, which is more than double the number of cases that NIOSH’s black lung surveillance programs have found in the last forty years.

A growing number of miners with the worst form of black lung is likely to create challenges for families, communities, and the region as the whole. Coal companies responsible for paying benefits could face a growing cost in an already difficult market. Taxpayers and the federal government could end up bearing more of the burden. 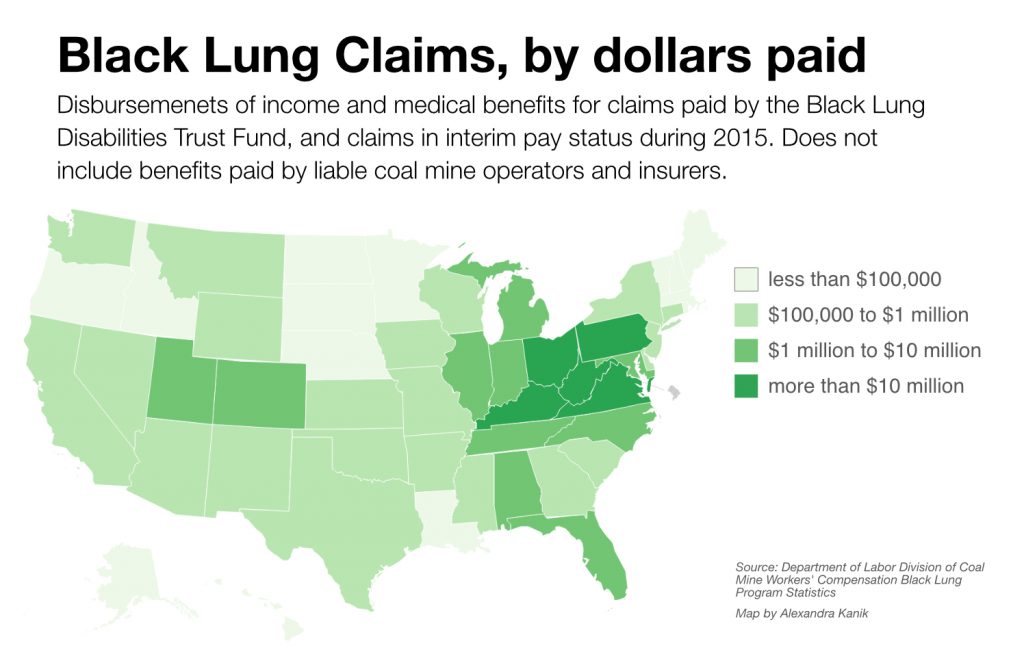 The federal government started paying black lung benefits in 1969 after thousands of striking miners demanded that black lung be recognized as a condition that deserved worker’s compensation.

The system has gone through a lot of changes in the years since, including changes to the requirements to receive benefits and how the costs are spread between taxpayers and coal companies. But since the 1980s, there had been one steady trend from year to year:  a decrease in the number of living beneficiaries, and the amount of benefits getting paid out each year. That’s what you’d expect given the number of regulations intended to limit exposure to coal dust.

But in the last few years, the number of black lung claims has been increasing. 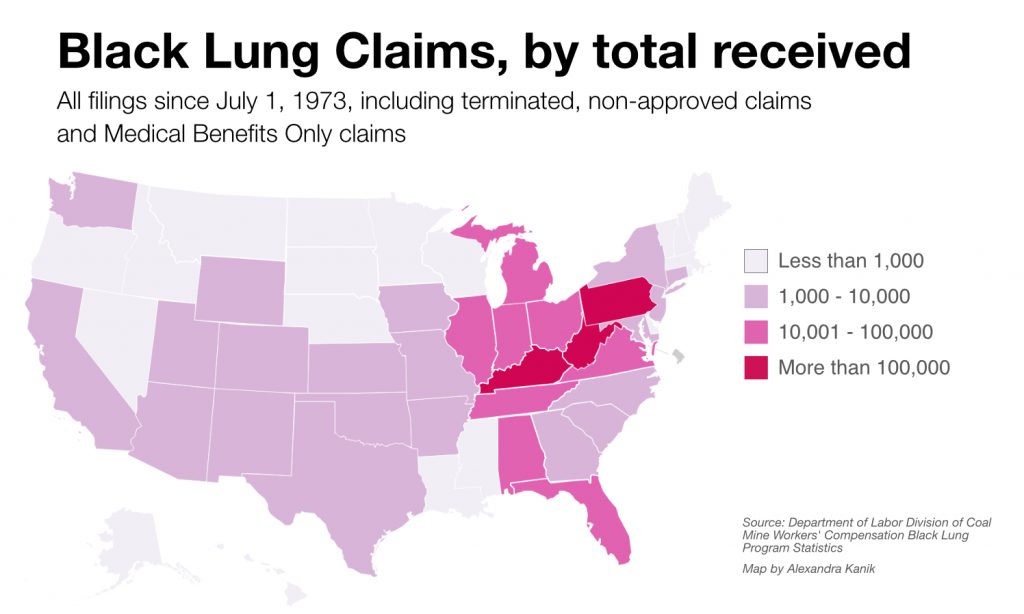 The new surge in the worst forms of black lung is more evidence that these regulations haven’t been working as well as they were intended to. Coal mines can be an extremely cost-conscious and productivity-oriented environment, and for years there have been widespread and well-documented cases of mine operators cutting corners and ignoring safety regulations.

A new dust rule may finally address some of the issues causing the current uptick, but because black lung is contracted through years of exposure, it’ll be at least a decade before anyone can tell if things have improved.

In the meantime, some in the region are concerned about the future of the federal black lung benefits fund. Among them is Evan Smith, an attorney at the Appalachian Citizen’s Law Center in Whitesburg, Kentucky, and the man behind blacklungblog.com.  Smith said the recent bankruptcies and the increase in black lung claims could put the fund at risk.

That’s especially worrying since the fund will also be losing income as the per-ton tax on coal that supports the fund will fall along with declining production. A temporary increase in the tax is also set to expire in December, 2018. Members of Congress have asked for an updated report on the fund’s viability. 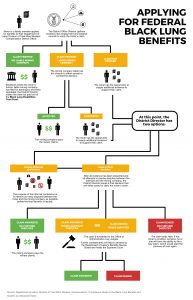 Click to view a flow chart on how to apply for black lung benefits.

Another possible change in the federal black lung program could come if the Republican Congress repeals the Affordable Care Act (also known as Obamacare). One section of the Act, known as the Byrd Amendment, made it easier for miners with at least 15 years of experience to file for black lung benefits, essentially shifting the burden of proving the cause of the disease from the miner to the mining company.

If the Affordable Care Act is repealed and the Byrd Amendment gets struck along with it, it could open a new set of challenges and delays that miners like Mackie Branham Jr. would have to face in trying to claim their black lung benefits.

The benefits process is adversarial and difficult to get through even with the help of a lawyer. Both Mackie and Amber Branham’s fathers have forms of black lung, but neither was able to get benefits, and that seems to be a common story.

It looks like Branham’s story is going to be different. On December 13th, the Branhams got some good news. After Branham submitted a diagnosis from seven doctors—  including a final one chosen by Alpha Natural Resources—  a Kentucky judge awarded Branham his worker’s compensation benefits, and Branham has hope that he’ll get a benefits payment in time for Christmas.