When President Donald Trump visited Kentucky for a recent rally he returned to a common theme from his campaign: environmental regulations are job-killers.

“I have already eliminated a devastating anti-coal regulation,” he said, referring to a measure he recently signed overturning a Department of Interior stream protection rule. “And that is just the beginning,” the president continued, pledging to turn the Environmental Protection Agency “from a job killer into a job creator.”

But in parts of coal country environmental regulations aren’t killing jobs, they’re creating them. Stream restoration made possible under the Clean Water Act is a multi-billion dollar industry and some former coal miners are finding work thanks to this revenue stream.

Hydrologist Ed Watson with Canaan Valley Institute, or CVI, is in the business of fixing broken streams, and business is good. From the inside of his truck Watson pointed up to a hillside towering behind a shopping center in Logan County, West Virginia. His organization just finished a five-year project restoring an entire watershed here.

“The watershed was mined ‘pre-law’,” Watson explained, meaning before the Surface Mining Control and Reclamation Act which requires coal companies to try to reclaim land. 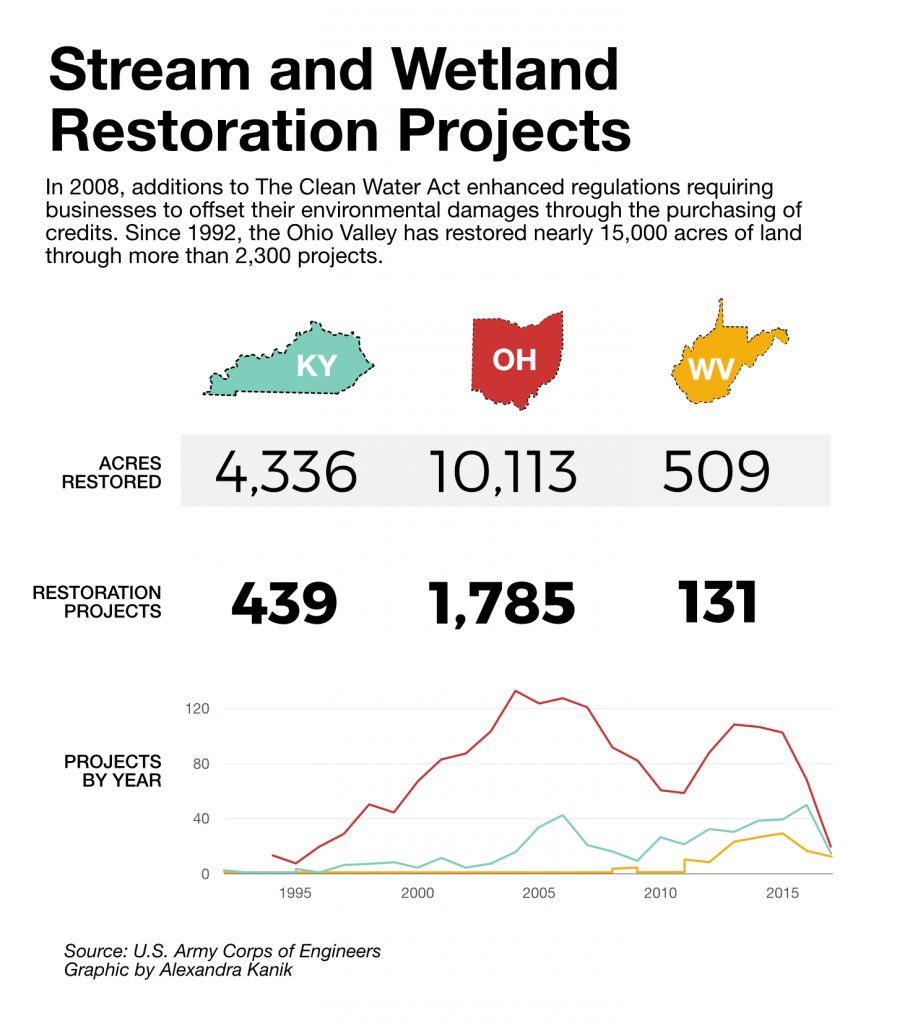 “We decided we could actually do something and possibly put some streams back where streams haven’t flowed for 50 or 60 years.”

Watson studied old topographical maps and clues in the land to figure out where streams used to exist. He pointed to a reconstructed hillside – a really steep one – with a small stream built in complete with rocks, woody debris, and native trees and shrubs planted alongside.

“We built a stream as though it has sorted itself out over over time — but in year one instead of year 10,000.”

“For us it’s always been about making the region a vibrant place to live,” said Jennifer Newland, executive director of CVI. “When you live in West Virginia you want to be able to fish and you want to be able to go take your kids out and look for salamanders under the rock and log,” she said. “That’s why we live here. And we want to be able to have that while we also have the ability to have other kinds of economic development.”

CVI was hired to design this project when a private company bought the land to see it permanently restored. That company, Ecosystems Investment Partners, or EIP, owns about 70,000 acres of land throughout the county that is either restored or in the process of being restored in what are called “mitigation banks.” 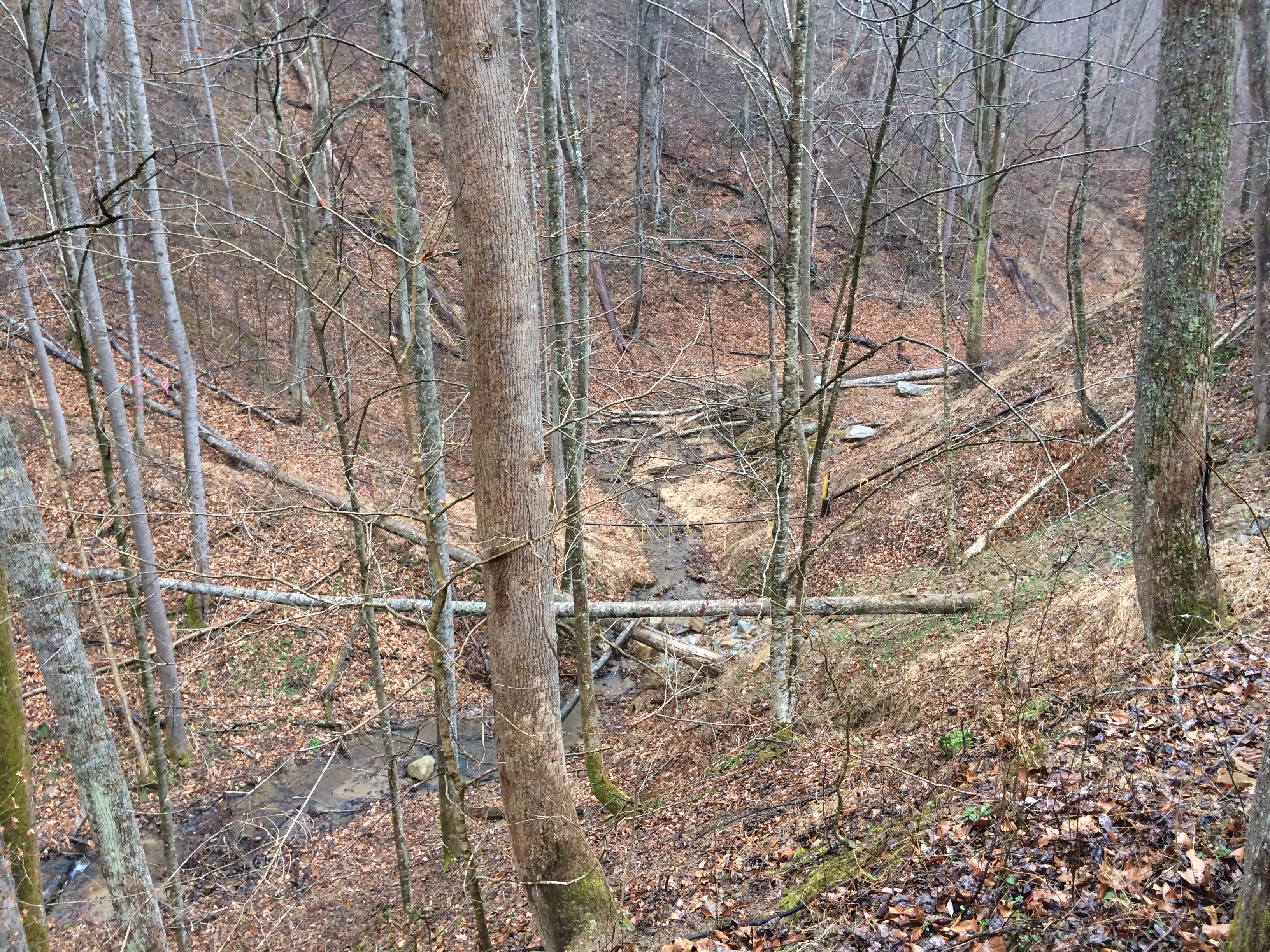 Mitigation bankers like EIP often work with state and federal agencies to identify and acquire disturbed properties, and develop restoration plans which must include long-term protection (typically through a land conservation trust or through a state program). These properties are monitored for at least a decade during which ecological value is determined using a variety of scoring systems. 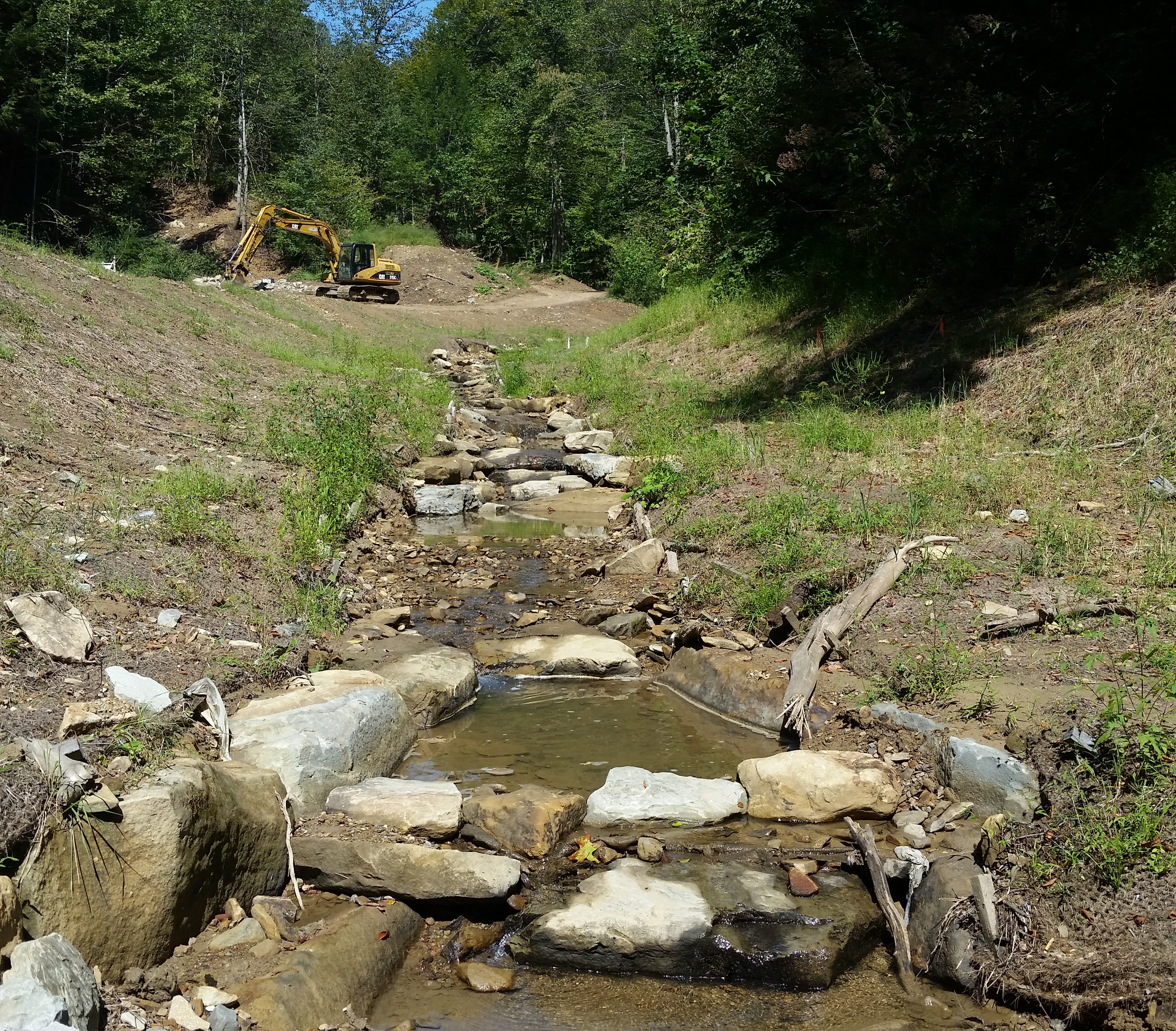 Stream restoration and mitigation banking are controversial among scientists. Click here to learn why.

Companies are awarded credits from state and federal agencies based on “ecological uplift.” Any developer that intends to impair or destroy a stream or wetland as part of a permitted project – be it an extractive industry, a Walmart, or a highway project – can buy those credits to offset the damage done.

EIP’s properties are just a small piece of the national mitigation banking pie. About 2000 banks exist throughout the U.S. The National Mitigation Banking Association estimates the ecological restoration industry as a whole creates $25 billion each year and a recent conference focused on the potential for more private investment.

Ed Watson with CVI does this kind of work because he loves working to improve the environment. He also loves a paycheck. And so do the the contractors hired to turn his designs into reality.

“Our basic business is a construction business that specializes in rebuilding streams and wetlands,” said Chris White, who co-founded a company called Appalachian Stream Restoration about 13 years ago in rural Lincoln County, West Virginia.

“I prefer to think of myself as a capitalist,” he said. 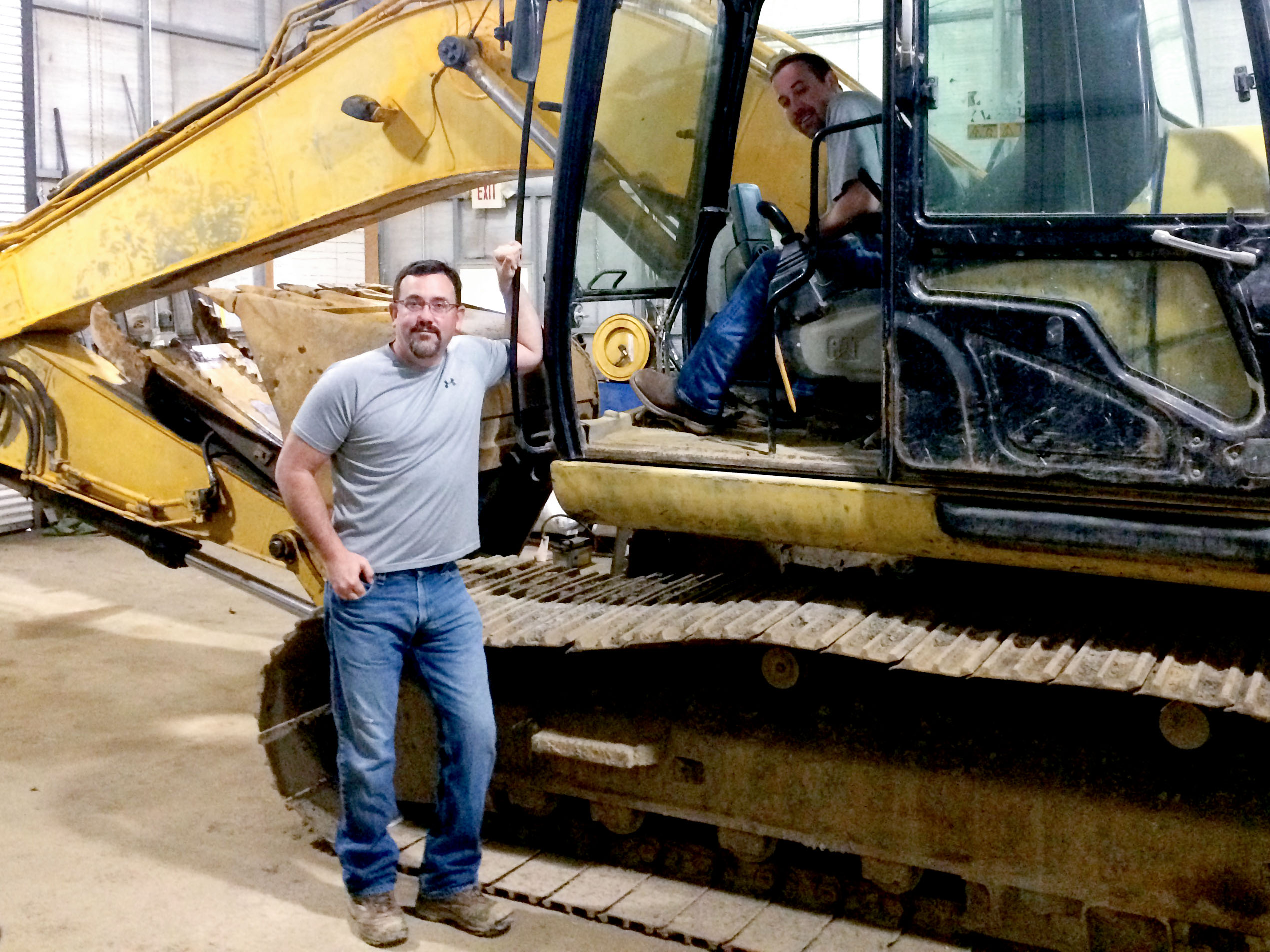 White grew up in what he calls “hit or miss coal mining,” where work may be plentiful one year and gone the next. He now employs about 30 people, some of them displaced miners. They travel all over the region fixing broken streams and wetlands with backhoes and other heavy machinery. He says he makes a $2 million payroll, annually.

There’s a lot of heated debate in scientific circles about stream mitigation, and the science of restoration is far from fine-tuned. Ecologist Matthew Baker, a professor and researcher at the University of Maryland, Baltimore County, explained that around the globe we’re seeing stream and wetland degradation at a historic pace, and our understanding of how these natural systems interact and function is limited.

“Because it is tough to design what we don’t fully comprehend,” Baker said, “more often than not our restorations are a partial fix, a ‘Disneyfication’ of reality.”

Stream restoration and mitigation banking remain controversial among scientists. “It is tough to design what we don’t fully comprehend,” one ecologist said.

But as long as the Clean Water Act remains intact, and land continues to be developed at the rate we see today, White and others restoring ecosystems expect to remain employed and making bank.