Can coal make a comeback? That’s the title of a new report from Columbia University’s Center on Global Energy Policy. Researchers there analyzed the factors leading to the coal industry’s sharp decline over the past six years and assessed the Trump administration’s efforts to revive it.

The report casts doubt on the chances for a significant increase in production and employment, and downplays the role of environmental regulations and the so called “War on Coal,” a common rhetorical theme for coal country politicians and President Trump.

Trevor Houser with the economic research company Rhodium Group is a co-author of the Columbia study. His report begins with analysis of what’ was driving the dramatic decline in the coal industry since 2011. 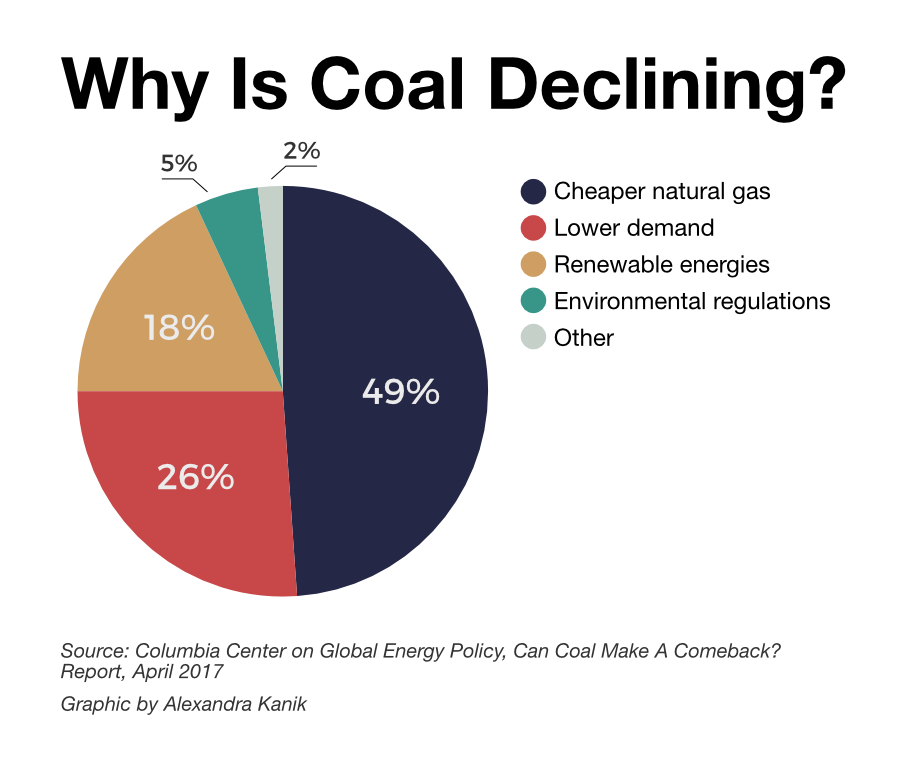 Cheaper natural gas from the shale gas boom is the biggest factor contributing to coal’s decline. Changes in international markets have reduced demand and lowered coal prices here in the U.S. Renewable energy is also becoming a lot more competitive. The report highlights how wind energy prices have fallen by 40 percent in recent years and solar by 80 percent.

“It’s unlikely that those market factors that have reduced coal production over the last five years are going to change in a way that will lead to a recovery in coal production in the years ahead,” Houser said.

Increased regulation, which is often blamed for coal’s decline, has probably had the least effect, according to Houser.

“Environmental regulations have played a role,” he said, “but in our analysis a relatively small one.”

The report estimates regulations might account for about 3 to 5 percent of the industry’s decline over the last several years.

Those environmental regulations have been the main focus of the Trump administration’s actions thus far to assist the industry, with executive orders intended to roll back regulations on mining activity and power plant emissions.

“If there ever was a war on coal it is over!” Houser said. “And if local politicians are of the view that those environmental regulations are really the primary culprit in declining coal production, then they should expect to see a sharp recovery in coal mining and coal employment in the years ahead, and their constituents should hold them accountable for that. We have a different view based on the research.”

Nationally, the industry has seen a small increase in activity in recent months. The U.S. Energy Information Administration forecasts coal production will rise 5 percent this year and 1 percent next year  — which would be the first back-to-back annual increase in coal output in 7 years.

Data from the Bureau of Labor Statistics suggests West Virginia has seen an increase in mining employment since last September. Numbers from Workforce West Virginia indicate a 5 percent increase (almost 800 jobs) in employment between the last two quarters of 2016.

Meanwhile, Kentucky has fallen from the country’s 3rd-largest coal producing state to 5th, and the state’s mining industry continues to shed jobs.

“We are fairly certain that we’ve plateaued from all the downward trends,” Chris Hamilton with the West Virginia Coal Association said. “We’ve withstood all the pressures that were forcing mines to close. Things are looking very positive right now.” 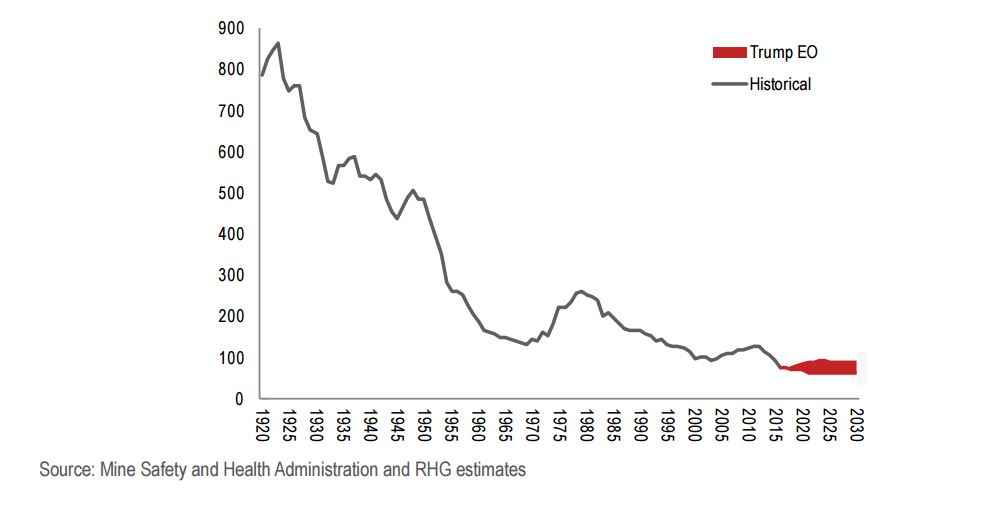 Graphic from the Columbia Report. The red area estimates what impact Trump administration changes might have.

Hamilton said sustained growth in the industry will depend on an increase in the U.S. steel and manufacturing sectors, in order to increase energy demand, as well as incentives for renewed investment in coal-fired power.

“Boy, a lot of things gotta line up in order to get back to where we were before,” he said.