Dressed in crisp blue scrubs, Certified Nurse Midwife JoAnne Burris walks briskly, the click of her sensible clogs a counterpoint to smooth jazz in the hall.

The University of Kentucky Midwife Clinic, with its large, color prints of newborns on earth-tone walls, still has that new furniture smell. But word-of-mouth already has the waiting room full.

“Best part of the appointment,” Burris said, “every time.” 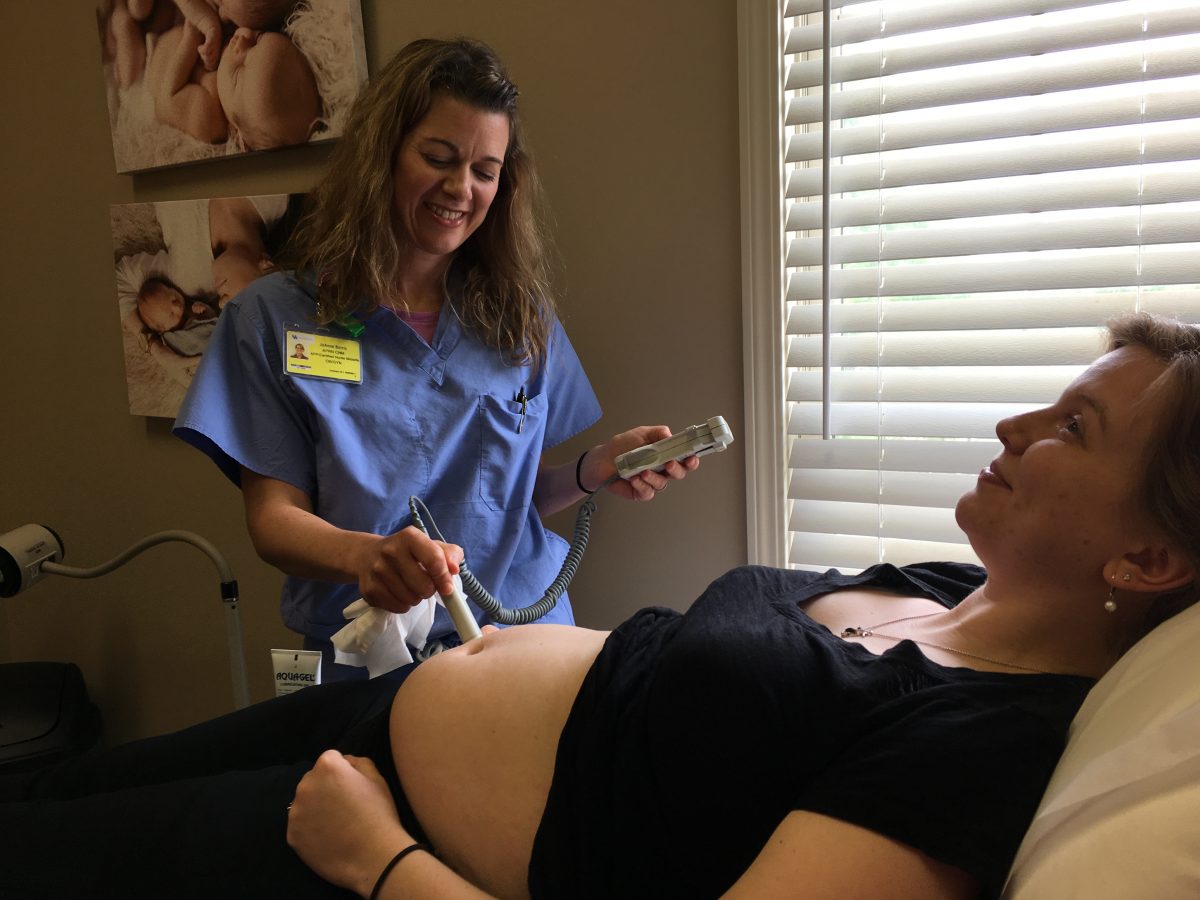 From Horseback to Hospitals

When the clinic opened in early June with Burris, her mentor Melissa Courtney, and two other midwives, it started the latest chapter in the long history of midwives in the Ohio Valley. Mary Breckenridge started American nurse midwifery in Hyden, Kentucky, with the foundation of Frontier Nursing Service. Now operating as Frontier Nursing University, it produces 30 percent of midwives in the country, including Burris.

Frontier nurses once famously slogged down creek beds on horseback to get to patients. Now, according to the American College of Nurse-Midwives (ACNM), 97 percent of midwives are affiliated with hospitals and most births take place in the hospital — not at home or in birthing centers. 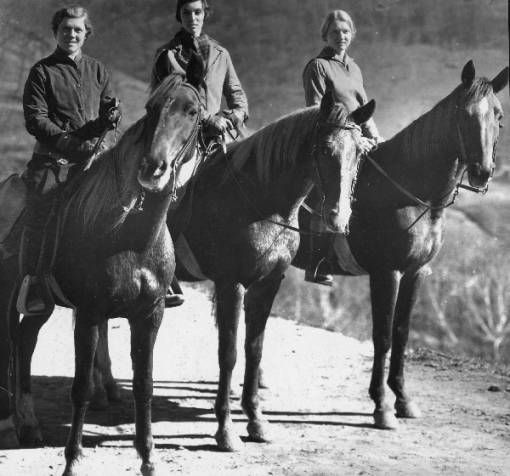 Three nurse midwives on their horses in Leslie County, Ky., in 1931.

Statistics also show that across the country about 12 percent of vaginal births are delivered by midwives. According to the ACNM, that’s up about 20 percent between 2004 and 2014, the last year for which data are available. 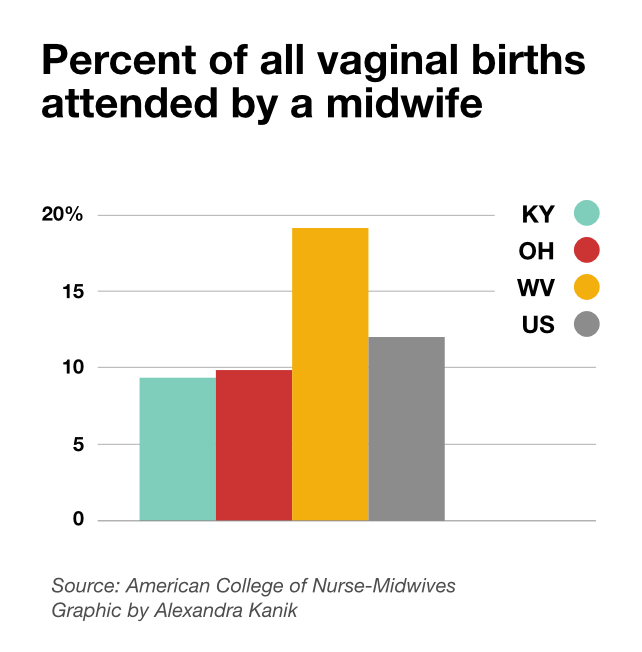 The history of midwifery in the region is strong. And today, Kentucky and Ohio have midwife programs in multiple affiliated hospitals. West Virginia also has a growing tradition of midwifery, with 19 percent of all vaginal births attended by midwives, a number higher than the national average of 12 percent.

Another factor pushing midwifery’s growth is that the service is covered by Medicaid. That government program provides medical care to the poor and pays for nearly half of the births in the country, according to the ACNM. Over the years, the rate of pay of midwives through Medicaid has risen to match what Medicaid paid doctors for delivery: According to the ACNM, it’s a 100 percent match in Ohio and West Virginia and a 75 percent match in Kentucky.

Still, when Emily Robertson, a school teacher, came to choose a midwife after researching on the internet, her husband needed a little convincing.

Jonathan Robertson, a mechanic, said he was worried about how safe his wife and child might be. But after learning more about how the process works, he got onboard.

Midwifery’s main attraction is its core focus on a healthy birth as a natural process. Over the years, Burris said, pregnancy became to be seen as something that always required medical treatment. Complex births do require medical assistance, she said. But most healthy births don’t. 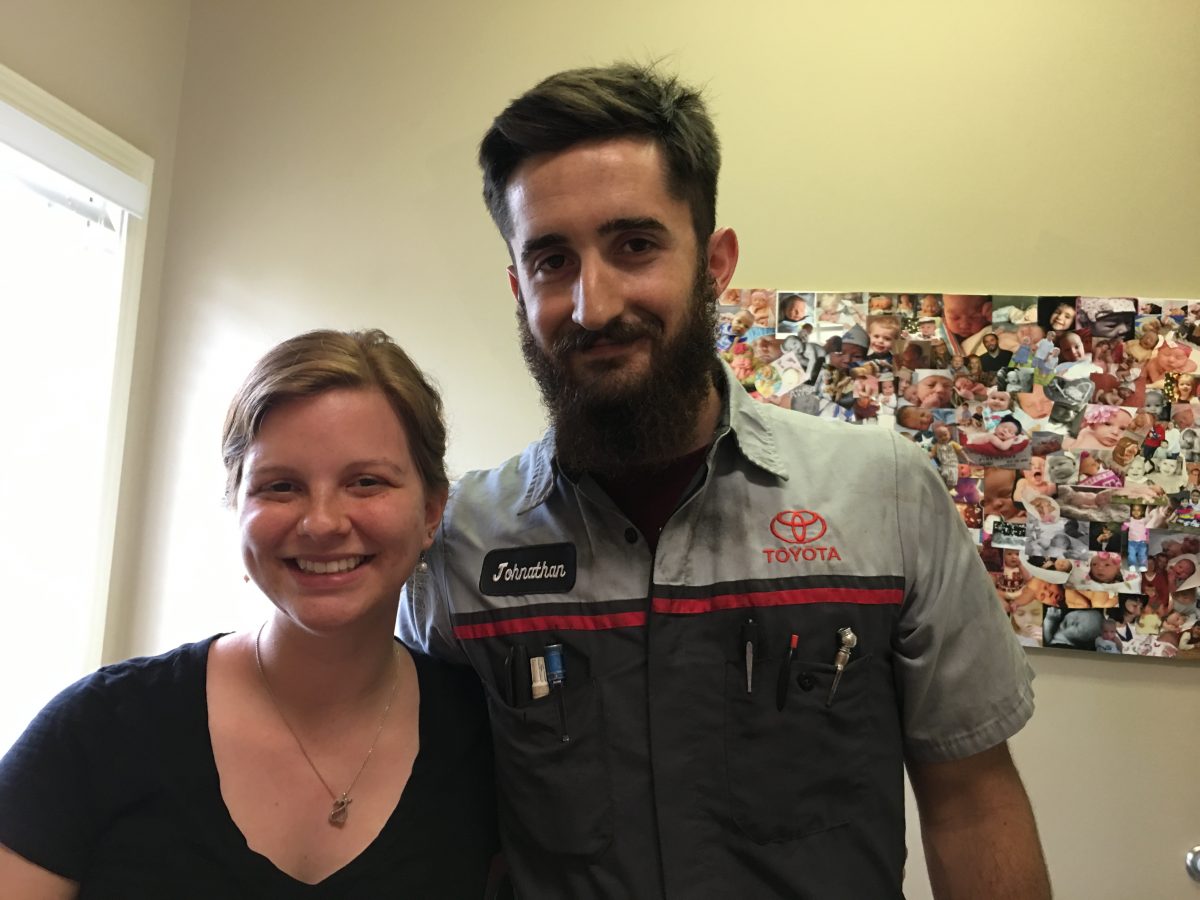 Emily and Jonathan Robertson picked a midwife to attend the birth of their first child.

Giving birth is one of the rare times people who are not sick are admitted to a hospital.

Jonathan Robertson said he found that approach convincing. “We look at it as something that is natural, we don’t look at as a medical problem,” he said.

Emily Robertson said she likes the personal attention and how supportive the midwives are. “When I call they listen to every little concern I have,” she said. “Even if it is a weird pain, they’ve been, ‘OK, this is normal,’ or, ‘this is not normal and you need to come in.’”

The couple highlights two factors involved in the growing use of midwives. Patricia Dodge, a certified clinical midwife instructor at the Wexner Medical Center at the Ohio State University, said midwifery has evolved since she began decades ago.

“When I started — I’m trying to think how I want to say it,” she said, searching for a diplomatic way to phrase things, “we had more of the hippy type moms, the vegetarians, those who wanted to do everything completely natural. Now it is very mainstream.”

She said midwives not only tend births but take care of many other women’s health needs before pregnancy and through menopause. And, yes, she said, even if a midwife delivers your baby, at delivery you can get an epidural.

“My first birth with my first child was natural birth, low intervention, but I felt very disempowered. Really it was fairly traumatic for me,” she said.

“With the second birth I wanted a different experience,” she said. She did some research and decided on Nurse Midwife Melissa Courtney for her second birth.

Courtney had opened an independent midwife clinic in 2011 and when Burris brought up hypnosis during childbirth, Courtney supported her decision. 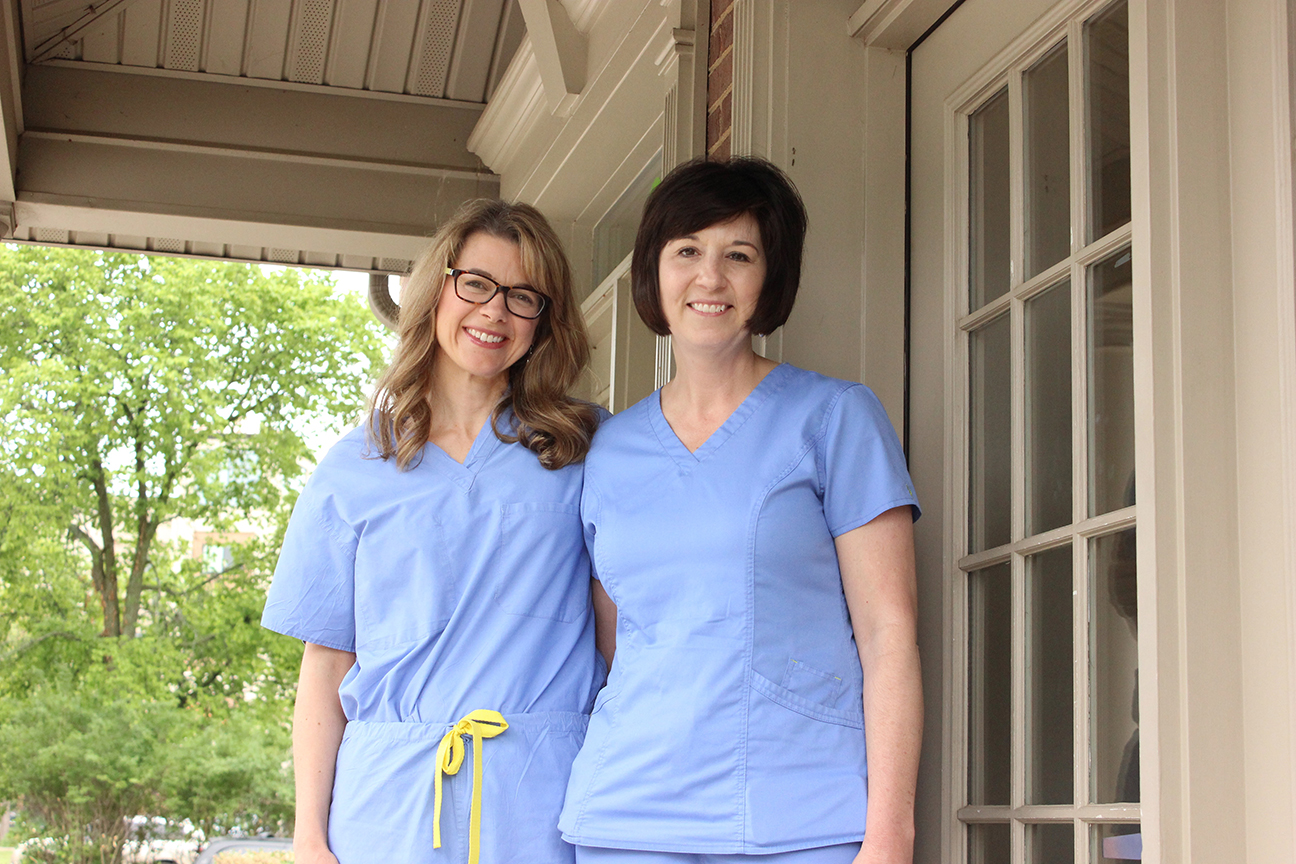 Nurse Midwives JoAnne Burris and Melissa Courtney are two of the four nurses at the UK Midwife Clinic which opened in early June.

But beyond that, Burris said, Courtney’s compassion and calm manner helped heal her trauma from her first birth.

She was so moved by the experience, she soon quit a 9 to 5 job in human resources, went back to school, and now has a hectic, unpredictable schedule delivery babies. She’s been a midwife for seven months.

“I felt like I was being obedient to my higher power, who I call God, and I feel like that has been confirmed over and over again. I find myself having to blink back tears during a birth,” she said. “It’s so very much a privilege to hold space for a woman as she becomes a mother.”

And it’s a space more mothers-to-be seek as a traditional practice gets new life.