The acres devoted to growing hops doubled in the U.S. in just the last five years and the trade group Hop Growers of America estimates that 95 percent of that market belongs to farmers along the West Coast. But the craft beer craze is changing the direction for hop farms by generating demand for more locally sourced ingredients, and Ohio Valley farmers like Wes Cole want in on the action.

On a small incline behind Cole’s homestead in Hickory, Kentucky, sits a tenth of an acre plot of Mt. Hood hops, a variety that’s tolerant to the crop disease downy mildew.

“This spot is about as windy as it could be. If you don’t believe me, try folding up a tarp out here. It will make you lose your religion,” Cole said, as he explained why a cool, dry location is critical in hop production. The plants will grow vertically, often requiring 25 feet or more of support in thick twine for the bines, or flexible stems, to wrap themselves around as they produce the cone-shaped grains used for bittering beer. 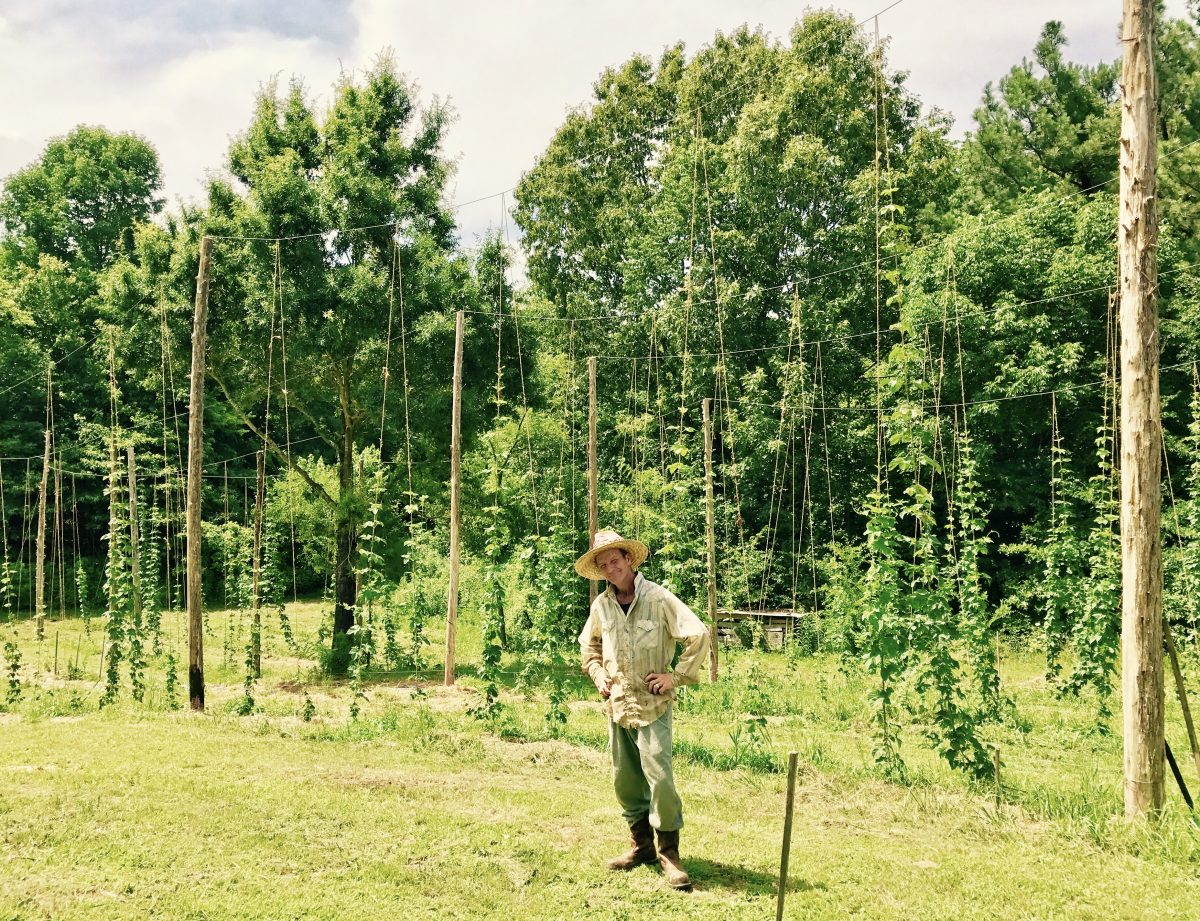 In the 1800s, Cole explained, hops were a prominent part of farming across the region. But the spread of crop disease in humid conditions forced most hop production out west, where growers continue to prosper commercially.

Cole likens crop diseases to biblical plagues. “You are going to fight it all the time of your life,” he said.

He knows his bible, and half-joked that his Southern Baptist church wouldn’t look favorably on his new venture with its ties to alcohol production. But finding a cash crop that he can grow with the autonomy that allows him choose organic methods is worth the penance.

“Tobacco is what got me into this because of the bad flavor that put in my mouth. Because I have grown a crop for another man all my life and made another man a ba-zillionaire and I’m living like a pauper,” Cole said.

Now he hopes hops will change that.

“I got into this because there ain’t no middle man. I’m making the money.” Cole said local breweries have a strong appetite for local hops. “They said, ‘You grow us any hop and we will use it. We want local hops, period.’”

So far three breweries have said they’ll buy his hops.

Hops bines, or flexible stems, grow along twine or other structures.

“Stick With The Cs”

Hop alliances in Ohio, West Virginia, and Kentucky say the region’s hop market is wide open. But securing a futures contract with a brewery decreases the risks farmers face in both the up-front costs to get started and the potential volatility of the market.

“We tell new growers to stick with the Cs,” said Scott Eidson with the Kentucky Hop Growers Alliance. “There’s three main varieties that start with C: Cascade, Chinook and Centennial. Out of those three, Cascade and Chinook grow extremely well in the state.”

The “super-human variety” Eidson said, is Chinook. “It can grow anywhere across the state.”

Eidson has been hop farming since 2009. He found that information on growing the plant in this region is scarce. When he would meet other farmers while looking to learn more conversations would develop, and those conversations became meetings, which eventually led to the creation of the Kentucky Hop Growers Alliance, which incorporated in 2015.

“Hops are very labor intensive and cost prohibitive,” Eidson warned. “So there is a lot of money to be made but that money is maybe five, 10 years down the road. It takes about three to five years to even break even.”

Eidson said a lot of farmers he meets are like Wes Cole — people looking to get away from tobacco. Cole is certain the bigger hops growers will make their way into the Ohio Valley and push him out at some point. But Eidson said the large producers are likely wary because basic information about the crop in the region is lacking. 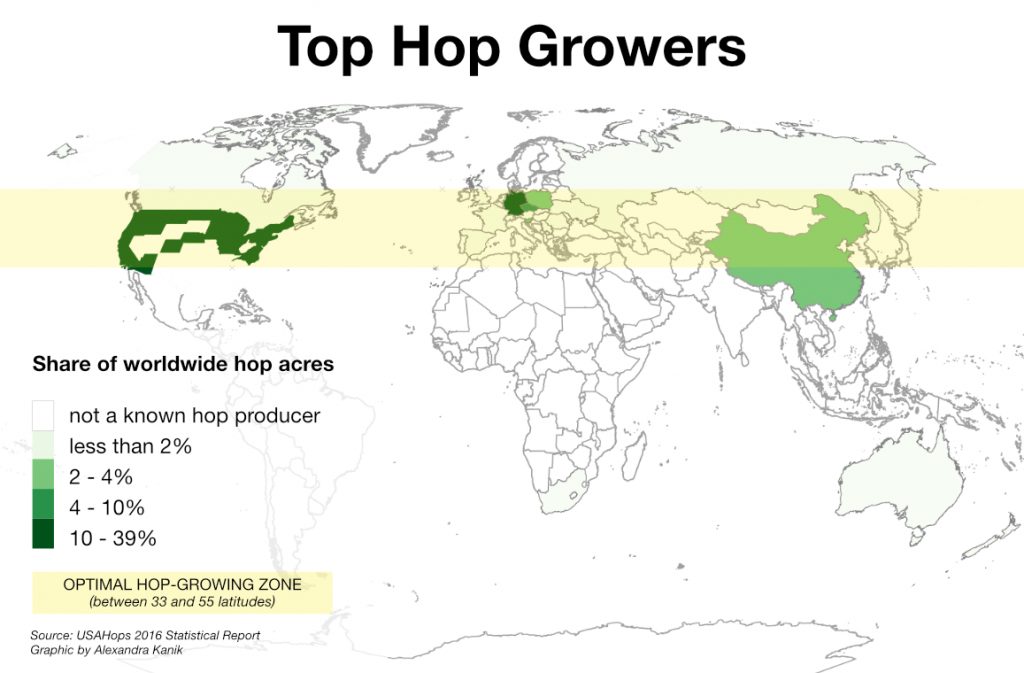 A ReSource data search found very little information on hops in the region.  A 2016 record shows 20 acres of hop varieties in Kentucky and 70 in Ohio. No information was available for West Virginia.

“So there’s limitations with the knowledge that we have, the skills that we have and the machinery that’s available,” Eidson said. And that raises concerns about just how well the crop might do here. 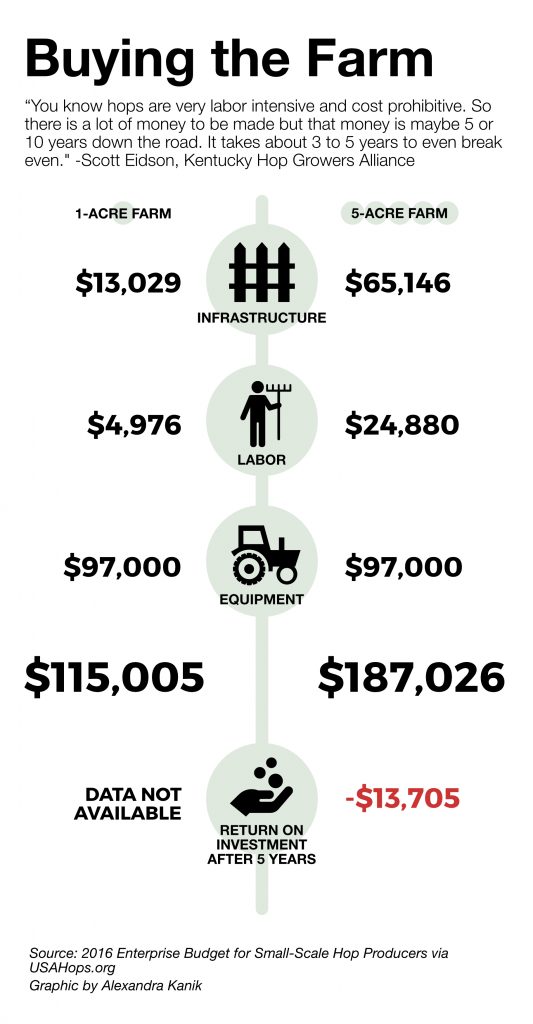 The ideal hop growing conditions lie between the 35th and 55th latitude parallels, which covers the entire Ohio Valley, and most of the continental U.S. But there are many local variations in conditions.

Volkman said Ohio growers have around 100 acres strung for harvest this year, “with about another 100 just put in,” he said. But most farms range from just one to four acres.

Eidson said the largest farm in Kentucky is currently 5 acres. However, Lexington-based West Sixth Brewery has purchased 120 acres with plans to grow hops and fruit trees. Co-owner Joe Kuosman said the farm is not for production purposes, but to educate the community on the beer making process.

Hops farms in the region are small but the investment costs are not.

As is the case with other industries with little local data to support the likelihood of success, hop farms have trouble persuading banks to offer loans.

“We lack multi-generational knowledge, although we’re learning a lot, fast,” said Volkman. Growers are concerned about the quality of hops and what sort of investment it takes to process the harvest.

“Most states have formed growers associations to collaborate, and a number of universities have research efforts,” Volkman said. “The processing infrastructure isn’t adequate yet in much of the Midwest.” 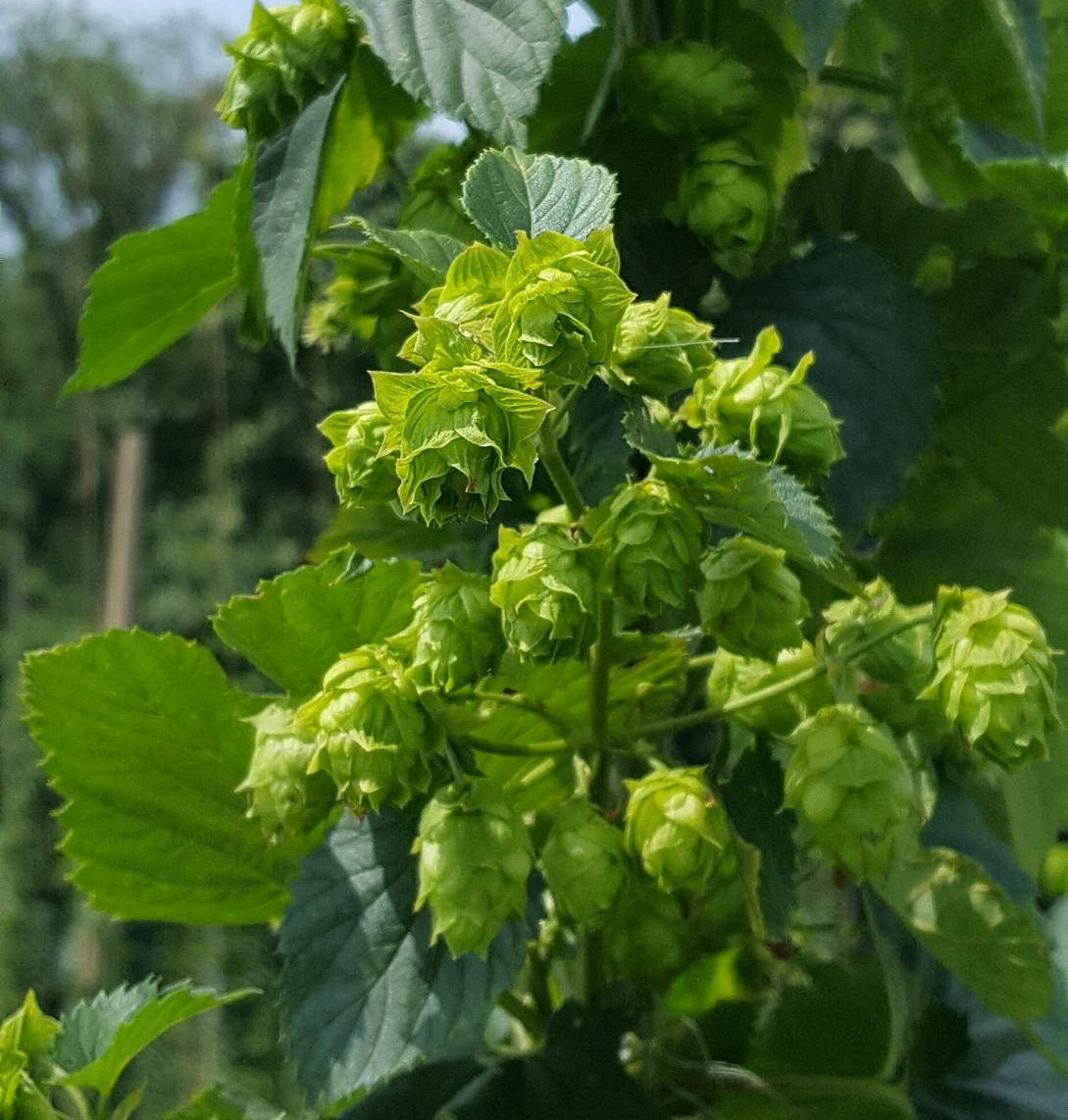 Hops are key to craft beers, but can be tricky for farmers.

The Kentucky Hop Growers Alliance and West Virginia State University are using grants to purchase equipment to ease some of the costs. West Virginia State University Extension Agent Brad Cochran said after a successful round of pilot hops projects, quality hops aren’t an issue. Neither is finding a place for the fresh batches. Most of those are used for “wet hopping” where brewers apply fresh hops flowers to a brew within days of harvest, a technique local breweries use in places lacking infrastructure to process hops.

“We sort of found out that processing is that next step. And so if we’re able to get these hops processed into a pelleted form that’s really going to open up a lot of additional markets,” Cochran said.

Drink Together, Grow Together

The pattern of co-op equipment shares, university support, and local hop alliances is in keeping with the spirit of craft beer, which reflects a sort of locavore renaissance. It’s something West Sixth Brewing’s Kuosman said he is seeing more of each day.

“And this is part of our story, right? As a local brewery we’re asking people to support the local brewery,” Kuosman said. “If we’re not supporting our local farmer then that story we’re trying to tell just isn’t isn’t real.” 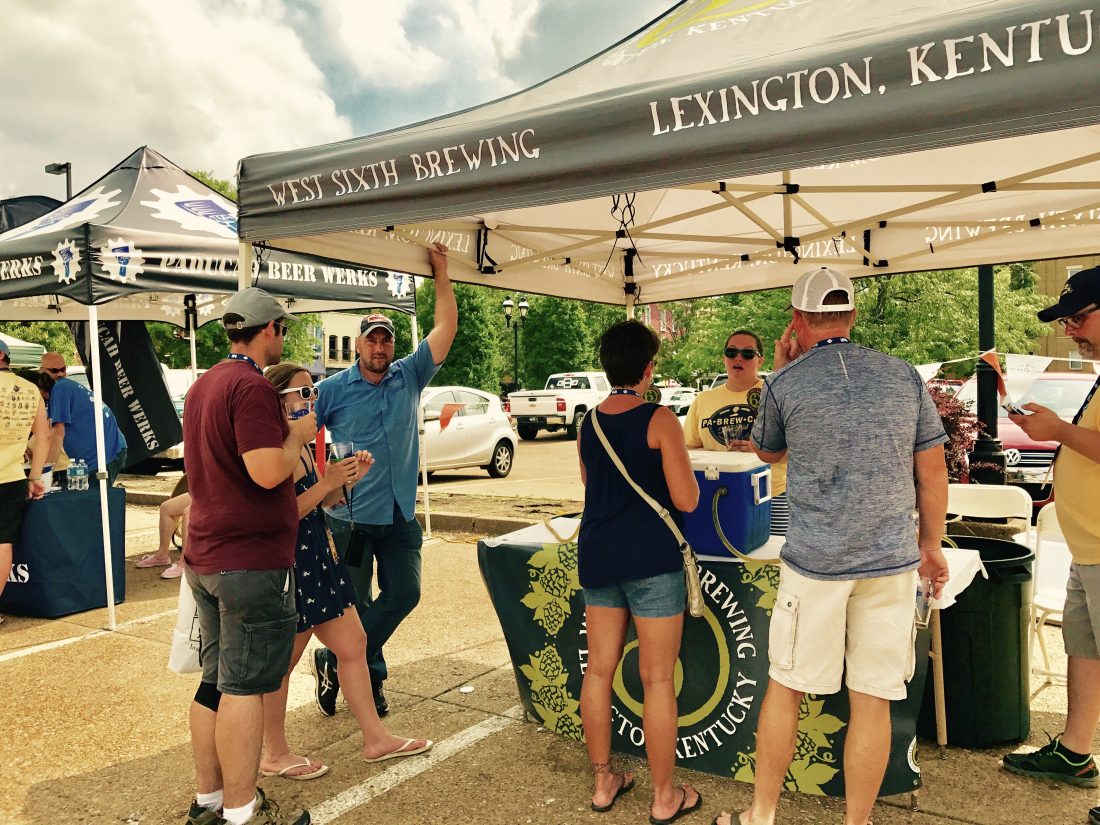 West Sixth Brewing of Lexington at a recent beer festival.

Kuosman left the corporate world to pursue his passion for brewing. He said he is amazed at the projects that have developed from collaborations associated with local brewing operations.

“Something that we’ve seen is that [breweries have] really helped to revitalize buildings and communities.” he said. “It’s not just a business, it’s not just a brewery or tap room–it’s become this community center where we do all these different activities from free yoga to the free running clubs,” Kuosman said. He recalled a Canadian visitor who likened his building to a YMCA, only with beer.

As with the local food movement, people want to know where their beer ingredients come from.

“They want to meet the person that’s growing that food and brewing that beer and really have their purchases going back to supporting their local community,” Kuosman said. “I think that is what it comes down to, in that it’s very old school, in that it is a relationship business.”

But craft beer palates also change frequently, and that can create a volatile market for farmers who are working with plants that can often take up to two years to establish themselves.

“A certain variety is very popular this year and something new comes out next year and that old variety just isn’t as popular anymore,” Kuosman said, so there will always be some risk.

This is why proprietary varieties like Michigan’s Warrior Hops do so well. The variety is owned by the state hop alliance, so it can control the supply.

But developing a proprietary variety takes a lot of work. Ohio Valley Hops’ Dave Volkmann said a few growers are experimenting with breeding, “but that’s a long, complicated and expensive process.”

He said hundred or thousands of crosses may yield only a few usable varieties, raising questions about whether it is worth the effort.

“While proprietary hops capture the imagination,  great beer is brewed every day with open-source hops,” he said. 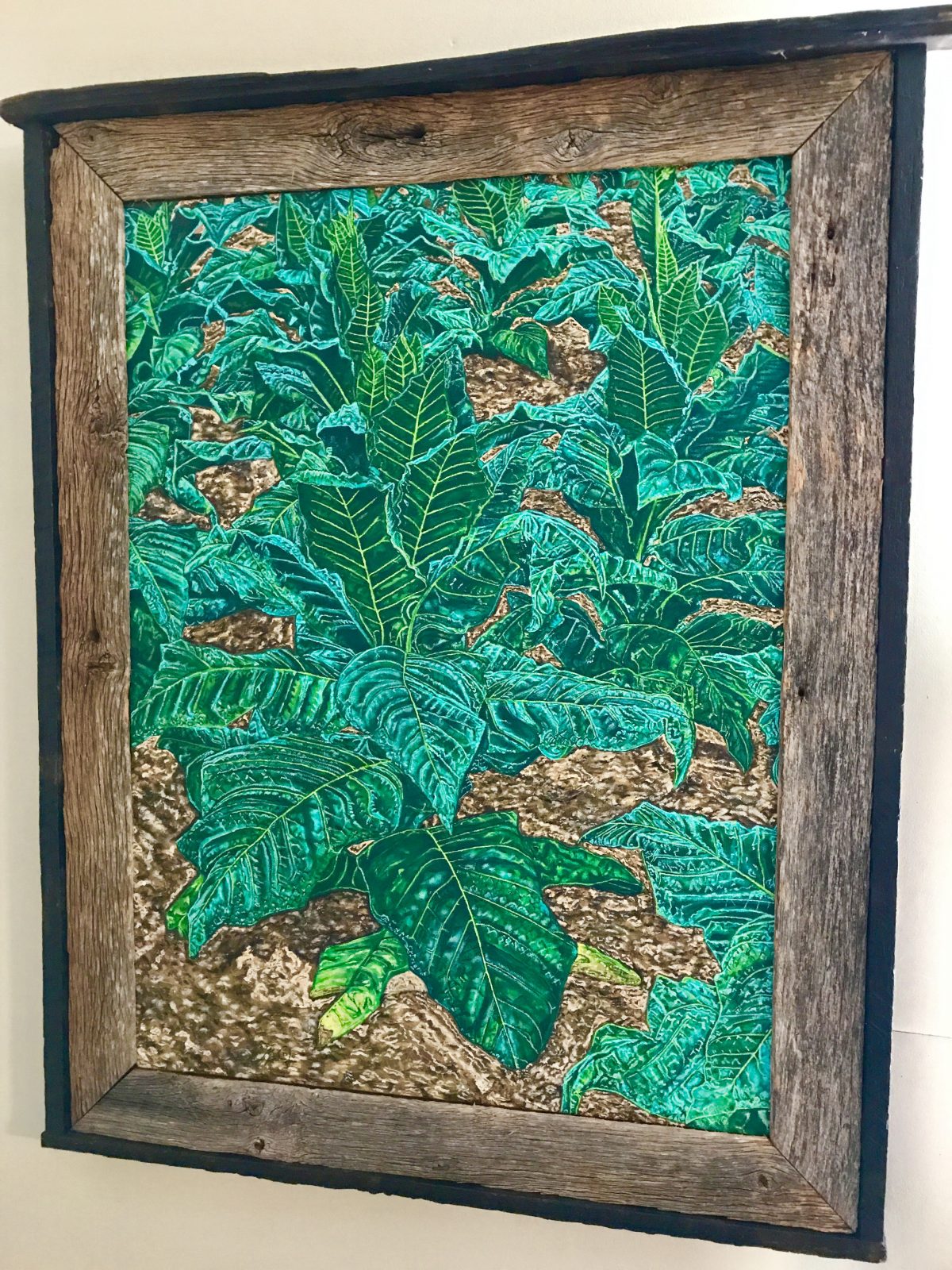 Kentucky Hop Growers Alliance sees proprietary hops varieties as an opportunity for future stability, Eidson said. The group has even joked about what the first variety would be named: “Kentucky Gold,” or “Bluegrass Hop,” or some variation in between.

Whatever happens with the hop industry, farmer Wes Cole figures it will  be better than his old tobacco growing days.

“Like I said, I’m done growing something for somebody else. I’m tired of fighting skin cancer and copperheads for a crop that another man is going to make fortune off of.”