The Ohio Valley has long been home to some of the dirtiest industries in the nation. Coal, plastics, and chemical plants and their waste sites dot our river valleys. Even those no longer operational leave their legacy in the soil and water.

Distler Farm sits on the outskirts of Louisville in Jefferson County, Kentucky. Its pastoral name is misleading. During the 1970s it served as a landfill for liquid waste, including medical and agricultural refuse.

From 1977 to 1988, thousands of drums of toxic waste were unearthed by inspections, construction, and river floods. The site was designated a Superfund site in 1979.

Superfund sites are hazardous areas the U.S. Environmental Protection Agency makes eligible for cleanup using a fund established by Congress in 1980. These sites are often the result of industrial activity or the mishandling of industrial byproducts. Many of the Superfund sites in the Ohio Valley are old industrial waste landfills, like Distler Farm. 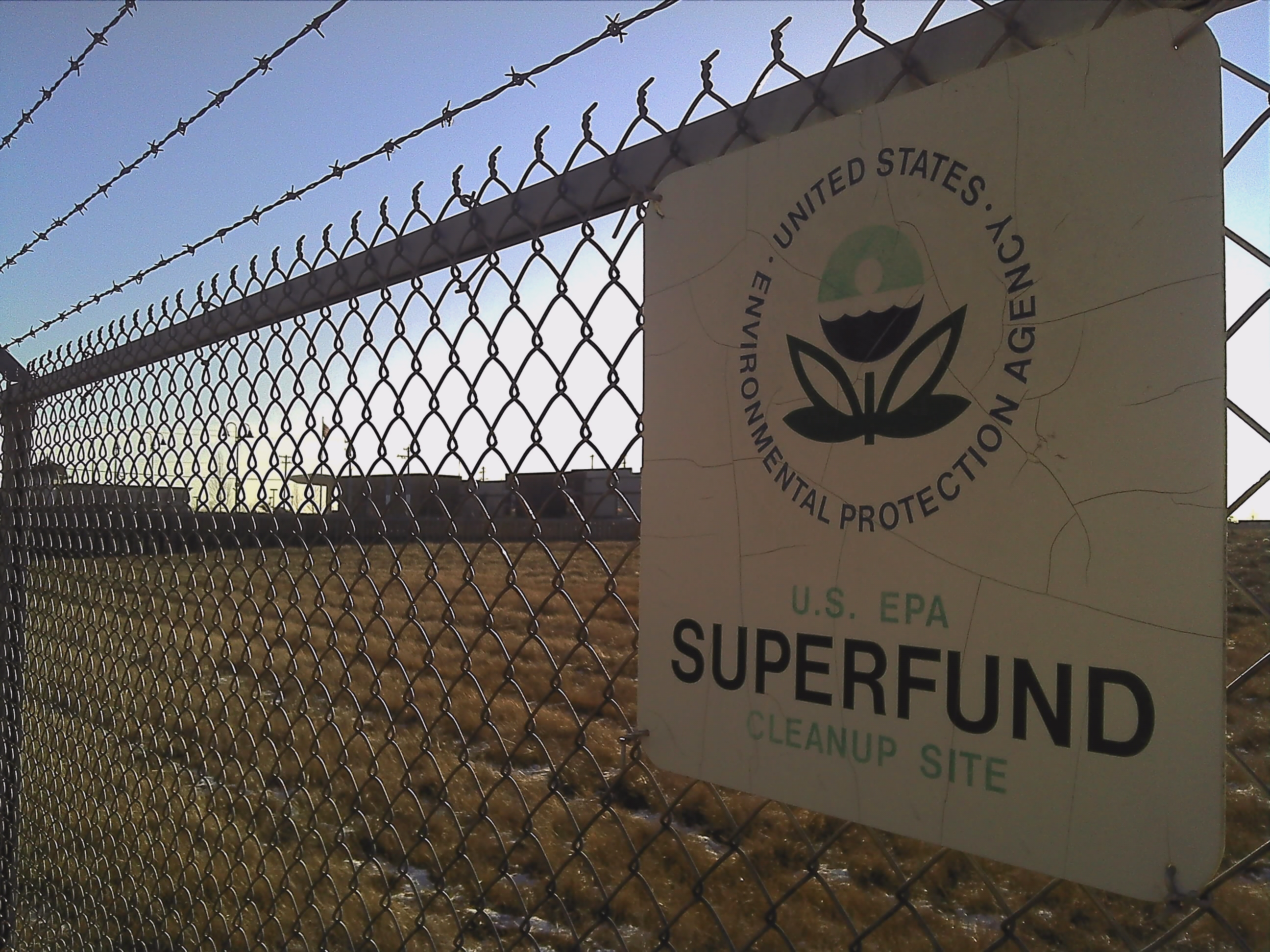 Today, the site sits empty. It’s considered stable due to the cleanup efforts by the EPA and Kentucky Department of Environmental Protection, or KDEP. But the site remains on the EPA’s National Priorities List of those sites considered higher priority because of the harm they pose to surrounding areas.

There’s an additional risk factor with Distler Farm. It is one of 16 EPA Superfund sites in Kentucky, Ohio and West Virginia on floodplains, according to a recent AP data analysis. Hurricane Harvey flooded toxic industrial sites in and around Houston this summer, raising questions about the risks of flooding at some of the nation’s most polluted places.

The AP data analysis shows that almost 2 million people live within one mile of the 327 federal Superfund sites in floodplains. The 16 sites in Kentucky, Ohio and West Virginia have approximately 43,000 people living within one mile, and statistics indicate many of those people could be especially vulnerable to the health and environmental effects of toxic contamination.

For example, nearly a quarter of those living within one mile are under the age of 18. In many cases, low-income housing or mobile home parks border the contaminated sites, as is the case with the Lees Lane site in Louisville and the National  Electric Coil Co. site in Harlan County, Kentucky. 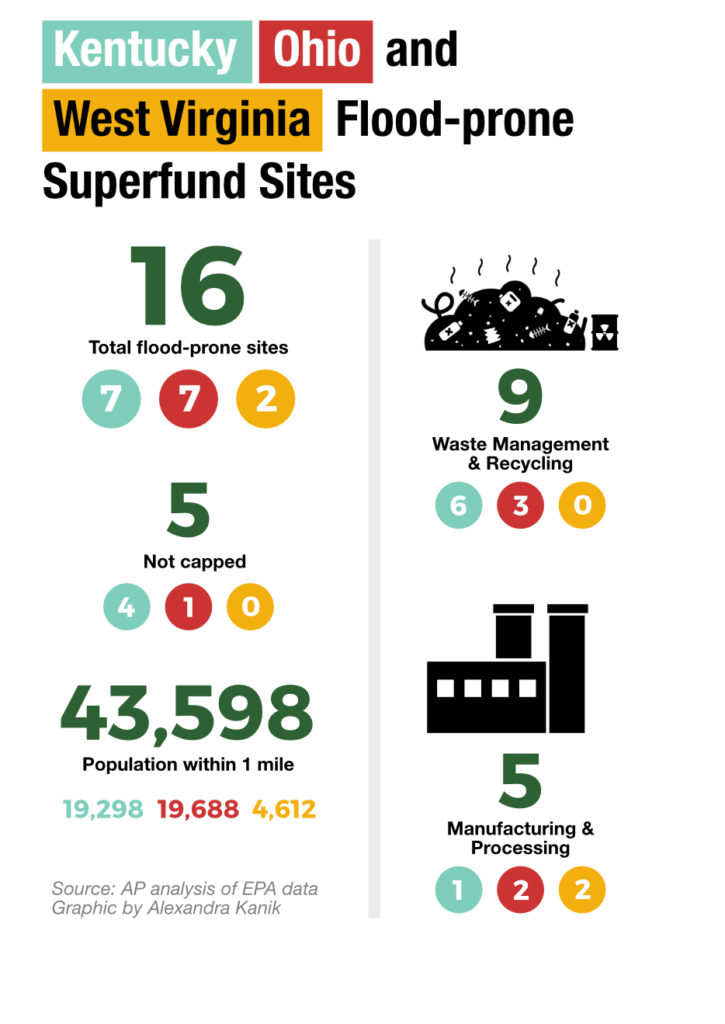 Half of the 16 flood-prone Superfund sites in the Ohio Valley were once waste disposal areas, like Distler Farm and United Scrap Lead Co., Inc. in Troy, Ohio, where lead from a former battery reclamation operation still permeates the soil.

Five of the sites are legacy manufacturing concerns. The Peters Cartridge Factory in Kings Mills, Ohio manufactured ammunition used during WWI and WWII. It was added a national Superfund site five years ago after lead, mercury and copper were discovered in the soil.

Last year, the North 25th Street Glass and Zinc site in Clarksburg, WV was added as a national Superfund site after years of struggling to control the arsenic, lead, and zinc it was leaching into the soil and sediment of the nearby West Fork River.

Some of the contaminants found at Superfund sites have names you might recognize, such as mercury, chloroform, methane and chromium, the chemical featured in the 2000 film “Erin Brockovich.”

But many of the contaminants are hard to pronounce and even harder to understand.

Bis(chloromethyl) ether, listed as a contaminant at the BF Goodrich site, causes irritation to the eyes, skin, and lungs and is known to cause lung cancer and tumors in people and animals.

Trichloroethylene causes dizziness, confusion and unconsciousness and is classified by the EPA and the International Agency for Research on Cancer as a human carcinogen.

Some of the 16 flood-prone Superfund sites in the Ohio Valley have already gone through mitigation and cleanup measures. Cleanup is usually provided by the EPA, state agencies and what are called potentially responsible parties, or those companies deemed partially liable for the hazardous sites.

However, at some sites officials are still in the process of deciding how to manage cleanup. That’s the case with the B.F. Goodrich site in Calvert City, Kentucky.

As Superfund branch manager for the Kentucky Department of Waste Management, Larry Hughes is one of the officials tasked with making decisions like those for state-managed Superfund sites.

“The [sites] that give us the most trouble are what we call the legacy sites,” Hughes said. “Where you’ve had a slow, long, systemic release of some kind of chemical that we now know to be harmful.”

The BF Goodrich site is one such “legacy site” and presents particular concerns about how contaminants infiltrate water.

In the mid-1950’s, BF Goodrich, best known for their tires, began manufacturing chemicals used in the production of PVC at a plant just south of the Tennessee River in western Kentucky. The waste generated from this manufacturing was stored in unlined ponds located in the floodplain. For nearly 30 years, contaminants from this waste seeped into the soil, the groundwater, and the nearby Tennessee River.

By the time the EPA  stepped in, in the 1980s, an estimated 3.5 million cubic yards of soil was contaminated. Since the site was added as a federal Superfund site, numerous measures have been taken to prevent additional harm to the environment and the populations surrounding the site. 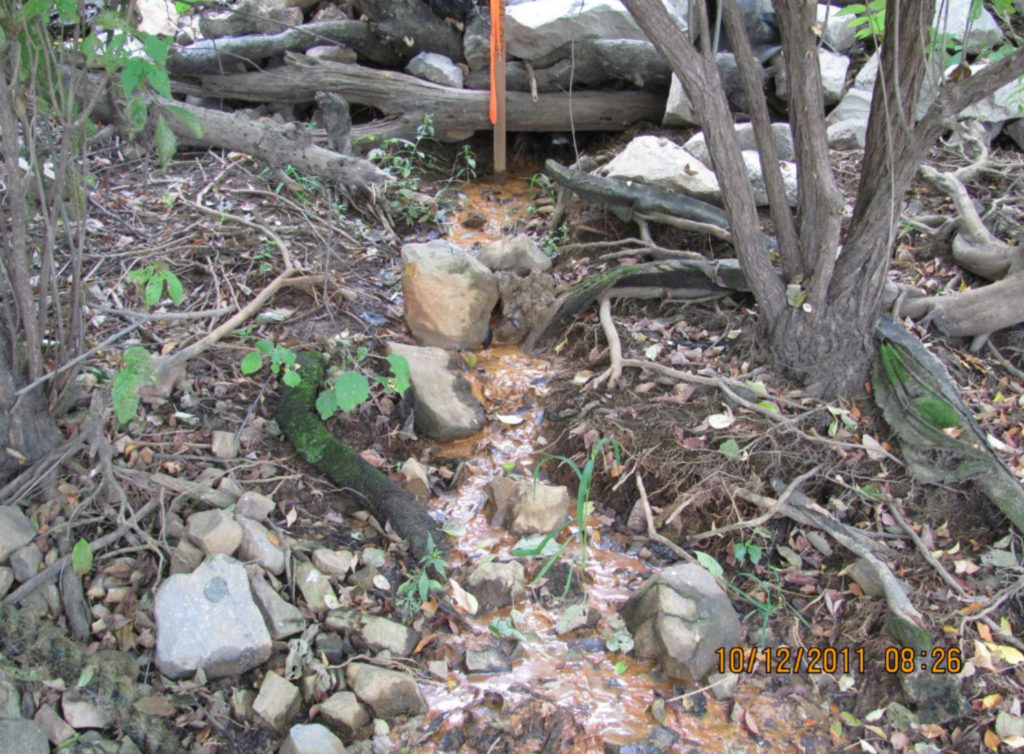 The unlined waste ponds were closed, groundwater was extracted and treated to remove contaminants and hazardous soil was excavated and contained in onsite landfills. But a 2006 review of the site found that the measures taken were not enough to mitigate long term harm.

In December the EPA and KDEP proposed building underground barriers around the facility that would keep further contaminants from reaching the river. A final decision is planned for early 2018.

Hughes noted that the risks posed by managed Superfund sites are usually to the ground water, and that these sites wouldn’t pose a significant risk during a flood event.

“A flood event is not going to dramatically change the groundwater condition,” Hughes said. “The main thing you might be worried about, and it would depend on the degree of flooding I would think, would be if you had some erosion you had to repair.”

The AP data analysis shows five of the Ohio Valley’s flood prone Superfund sites are not capped, like the Newport Dump site in Wilder, Kentucky. More than 15,000 people reside within one mile of this legacy waste disposal site. A quarter of those are children under the age of 18. Contaminants found in the soil at the Newport Dump site include arsenic, chromium and  polychlorinated biphenyls, or PCBs, which can affect the the development of children.

Zanesville Well Field, a Superfund site in Zanesville, Ohio is also not capped. Heavy metals and trichloroethylene, a carcinogen, industrial solvent, can be found in the soil there. Cleanup and monitoring of that site is still ongoing.

The AP looked at Superfund sites in either the 100 or 500 year flood zones, areas which climatologists predict would statistically expect to see flooding within that time frame. In recent years, however, the Ohio Valley has seen an increase in extreme precipitation events, which in turn has lead to an increase in flooding. 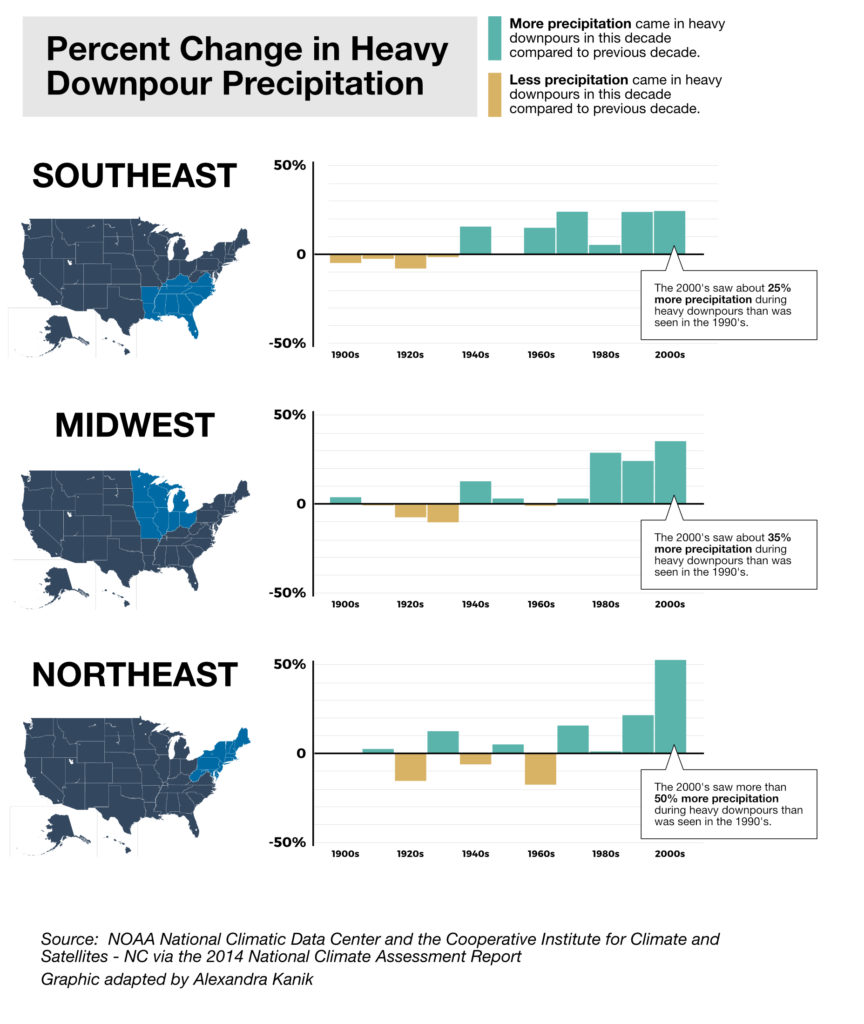 In July 2016, for example, parts of West Virginia experienced historically unprecedented flooding that the National Weather Service said “would be nearly a 1 in a thousand year event.”

And in April 2011, Paducah, Kentucky, saw its wettest season on record after nearly 16 inches of rain pushed the Ohio River to levels rivaled only by the infamous flood of 1937.

The Kentucky Department of Waste Management Superfund division sent letters out to hundreds of Kentucky Superfund sites, instructing them to look for indications that the mitigation efforts used to keep the toxic contaminants from escaping were still holding strong.

None of the sites reported issues.

There are 85 EPA Superfund sites in Kentucky, Ohio and West Virginia, including the 16 located in flood-prone areas. But there are hundreds of additional toxic sites that state agencies have identified as sites of concern. These “state Superfund” sites are similar to federal sites, but they do not meet the risk standards to be listed on the National Priority List.

Managing the risk at all of these sites can be financially difficult for state and federal governments. The Trump administration’s budget proposes to cut funding to the Superfund program by 25 percent. But even states whose funding hasn’t been affected are finding the demand for funds hard to meet.

Hughes said Kentucky agencies have not faced any funding cuts but the lingering list of decades-old hazardous sites means he still faces a funding shortage.

“We have very limited funding and resources,” he said. “And you have such a mountain of sites to deal with.”

A mountain of sites made more problematic by the risk of river flooding.