Health officials in the Ohio Valley are investigating outbreaks of disease associated with needle drug use in what is emerging as a new public health threat from the region’s profound opioid addiction crisis. 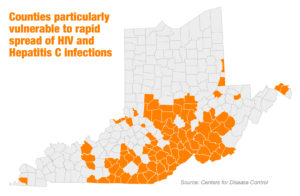 In northern Kentucky the health department is tracking a cluster of 43 recent HIV cases, about half of which are related to needle drug use. In West Virginia, the Centers for Disease Control and Prevention just released a report on 40 new HIV cases diagnosed in 2017 in 15 mostly rural counties.

When CDC researchers looked for the country’s places most at risk for outbreaks of needle-borne diseases such as HIV and Hepatitis C, they found them in Kentucky, Ohio and West Virginia. The 2016 analysis found nearly a hundred counties in the Ohio Valley at high risk.

Health officials say the stigma associated with HIV can add to that risk. In rural communities, stigma can hinder monitoring, testing, and treatment and add to the risk of widespread outbreaks.

The stories of two rural West Virginia residents living with HIV show how powerful stigma can be and what it takes to overcome it.

Carl was in his senior year at Concord University in Mercer County, West Virginia, when he had some routine blood work done during a hospital admission.

“They found out that I was infected with HIV,” he said.

He thinks he contracted the disease from a same-sex partner. Even though he used protection, he said, his partner was careless one time.

In this story we use just Carl’s first name. He said it’s been a struggle telling people he has HIV because of the stigma against people with the disease.

“I have two people out of my entire family that know.” 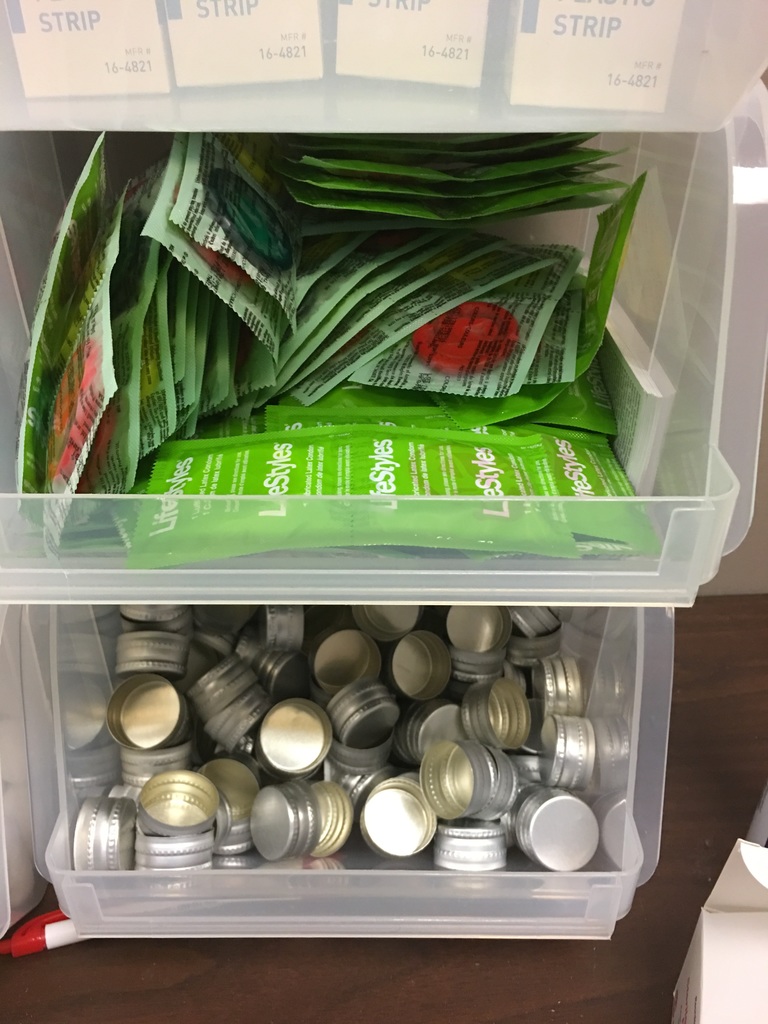 Condoms and “shooting caps” available at a syringe service location.

Even, among some doctors, Carl said, he encounters homophobia. He recalled an early visit to a doctor in nearby Beckley.

“She, in so many words said, ‘Well if I were you I wouldn’t have done the actions to get this,’” he remembered. “And that sent me spiraling, that a medical professional would be so crass to somebody that was so mentally fragile.”

At the time, Carl had just been diagnosed. He stopped taking his medication for a few days and almost gave up. Then he contacted the Ryan White program at Charleston Area Medical Center, where he now makes the two-hour round trip drive for check-up visits.

Tania Basta, who chairs the Department of Social and Public Health at Ohio University, has done research on the effects of stigma in rural Appalachia.

“There are providers who, in rural areas, unfortunately are still stigmatizing against their patients,” she said. “They may feel that, unfortunately, some people with HIV, they did this to themselves.” 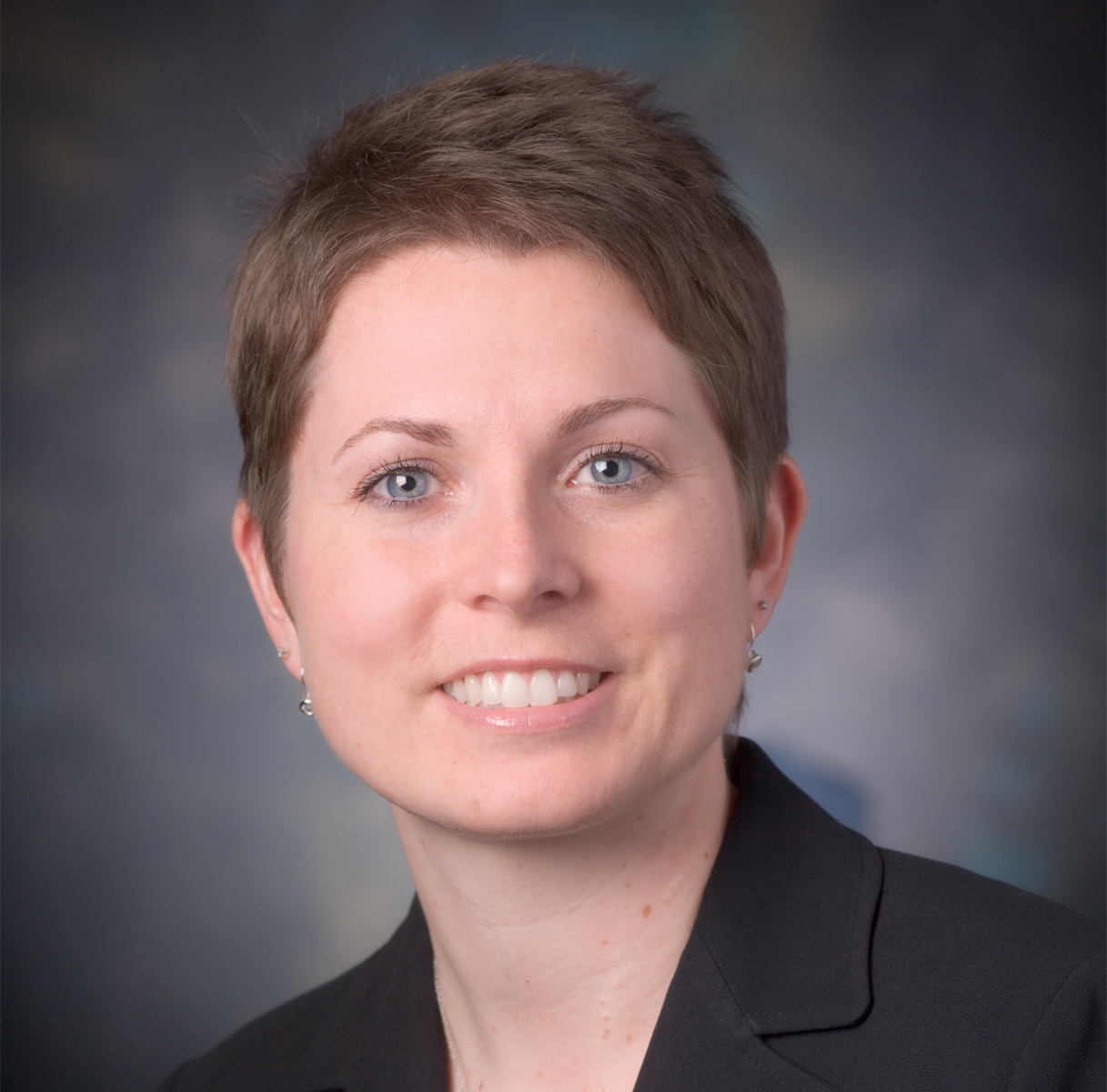 Like most places in central Appalachia, West Virginia does not have a high number of people with HIV or AIDS. At the end of 2016 the state health department recorded 1,746 people in West Virginia who were living with HIV.

But researchers like Basta worry about undiagnosed cases, especially in the rural areas of the state affected by the opioid crisis.

“Testing is an issue,” she said. “And I’m not saying that stigma is any higher in rural areas. It’s just that, because of the nature of living in small towns, where everybody kind of knows everybody, word travels quickly.”

The CDC report on the recent outbreak in West Virginia listed other factors contributing to the spread of disease: transportation from remote areas, poor health literacy, and stigma. 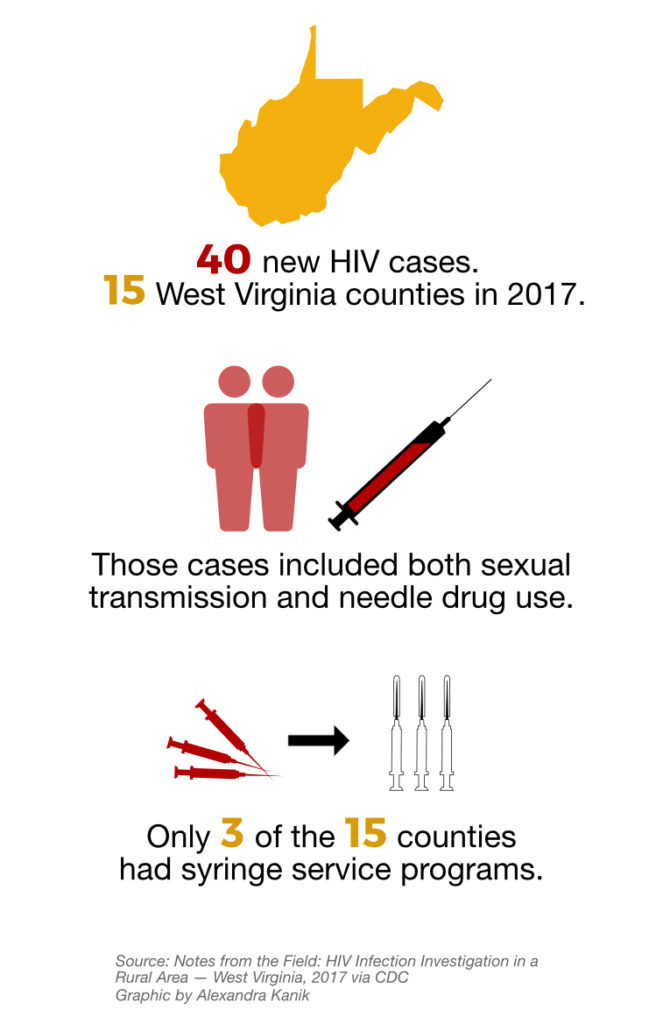 The new cases included both sexual transmission and needle drug use. Fourteen of the 15 counties where new cases were identified were on the CDC’s 2016 list of counties at high risk of disease. Yet only three of the counties had syringe service programs, which medical evidence shows is an effective way to reduce harm from drug use. Syringe services, also known as needle exchanges, can also serve as an opportunity to test for needle-borne disease.

Few people living with HIV or AIDS in southern West Virginia are willing to tell their stories in public. Elena Imes is one of them. She has lived with the disease for 18 years.

For many years before the disease progressed, Imes said, she did not know she had been infected by her husband. She worries that there are many undiagnosed cases in her community.

“Part of the problem is, the negativity of the disease itself, and the fear, and the stereotyping,” she said. People she meets often assume that “if you’ve got AIDS, you’ve probably did something bad, Christianly bad.”

“They don’t want anyone to see them go take a test. Consequently, people don’t take the test.”

Imes has told her story to the media several times, but speaking out has brought some backlash. She recounted one incident from a few years ago, when she worked at a local Walmart. 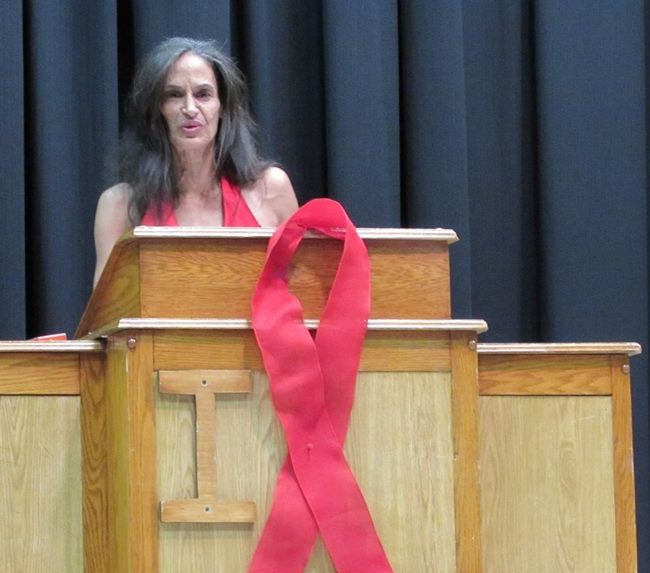 Elena Imes at a World Aids Day event she organized.

A woman recognized her from a TV news story.

“I know you, you’re from the TV, you’re killing us all!” Imes remembered the woman shouting in the parking lot, drawing a crowd. She accused Imes of infecting people by touching things when she stocked the shelves.

“That hurt so bad,” Imes said, tears welling up at the memory. “And that woman really thought she was warning everybody.”

Imes has had other experiences like this over the years. Another woman in her neighborhood was worried Imes could infect people by swimming at the local pool. So Imes stopped going there to swim.

But it hasn’t all been bad. She has neighbors and church friends who’ve been supportive and who check on her. She has four adopted sons, all grown, who stop by sometimes. But for the most part, she has no family to lean on.

Imes lives in a small wooden house in Coal City in Raleigh County, where she runs a small animal rescue service. As we step through the front door, pink curtains and a thin layer of frayed plastic cover holes in her windows. When I visited she wore five layers of clothes indoors to keep warm.

She weighs less than 80 pounds. Her health is deteriorating and she’s struggling to get by.

She doesn’t work at Walmart anymore. A few years ago, she lost her mode of transportation. One night, she tried to hitchhike to work, and was raped. Her perpetrators were never caught. Now, she worries that those who raped her are unintentionally spreading the disease.

As I listened to Imes tell her story, and Carl, I wondered why they stay where they are.

Imes said one reason is because she wants to stay and help other people who have the same disease.

“I would tell them the worst thing they could do is to keep it a secret,” she said. “If you can toughen up, you need to share it, be open about it. That’s the problem, if more people were open then the stigma wouldn’t be there.”

Because she’s been in the media telling her story Imes has become almost a one-woman support system for people here who have HIV. That’s something Carl said people need more of.

“The biggest fear that someone with this has this infection has is doing it alone,” he said. “And that often causes you to become depressed because you are lonely.”

I asked Carl if he’s ever considered moving to a bigger city, where he’d have access to medical treatment closer to home, and where he wouldn’t have to feel shame at his church, or at his local pharmacy.

“I would rather live here and put up a front then move somewhere and be myself,” he said. “I know that sounds kind of odd, but I do love this place. It is a beautiful place.”

Although he is worried that this article will lead his friends and family to find out he has HIV, Carl said he thinks it’s worth the risk. Telling his story might help someone decide to get tested.