Jeff McGrew stood in line with about 30 other west Kentucky farmers awaiting certification that they’ve been trained to apply the herbicide Dicamba. The two hour session explained the Environmental Protection Agency’s new restrictions on use of the controversial herbicide. The session left McGrew uncertain about whether to use the spray.

“I’m undecided right now but I’m leaning towards not spraying it,” he said. “I don’t think in our area we’re going to have much of any place that there will be enough area that we won’t have buffer zones or other sensitive crops and I’m not sure that it’s going to work out for us.” 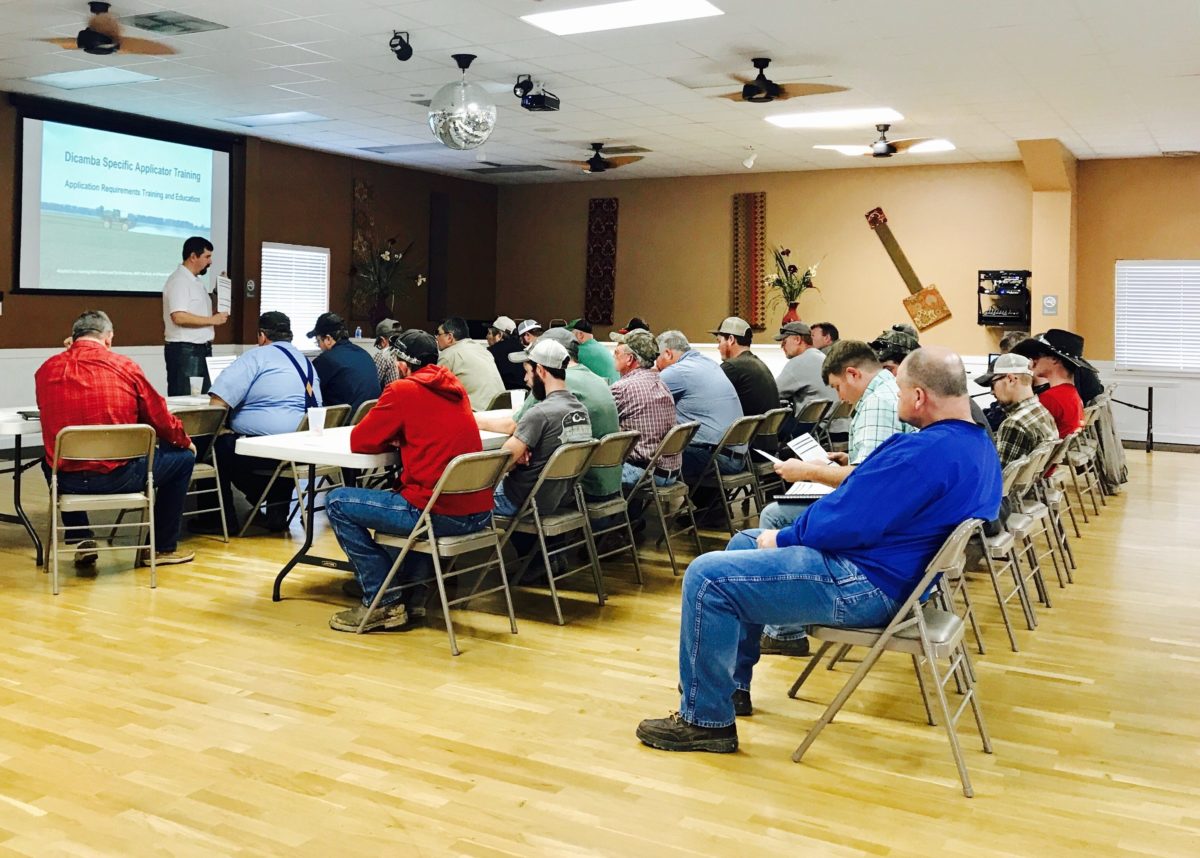 EPA requires all users have training before they can legally apply the product. As the ReSource reported in September, soybean farmers in Kentucky, Ohio and West Virginia identified more than 50,000 acres of crops affected by misuse of the herbicide in 2017. The spray is meant to protect soybeans from weeds but can harm other plants if improperly applied or if it drifts under certain weather conditions.

McGrew is worried about damage at a farm he plans to rent this year.

“Part of the ground that we farm is on the river bottom right on the edge of the Ohio River. We’re concerned about some drift coming across the river from Illinois.” McGrew said. “So we don’t know exactly where that comes from, but we’re kind of concerned about it.”

As a new growing season approaches, Ohio Valley farmers are facing some tough decisions about whether to use the controversial herbicide, now blamed for damaging millions of acres of crops nationwide. Even some farmers trained on proper use of the herbicide say it might not be worth the risk.

Changes to the Dicamba label require applicators to follow strict guidelines. For example, the herbicide should only be sprayed at times when the wind speed is between 3 and 10 miles per hour. University of Arkansas soybean agronomist Jeremy Ross said the label’s restrictions are nearly impossible to follow.

“I think now, you know, we have pretty much opened Pandora’s box,” he said. “As rapidly as technology is changing and some of these issues are coming up, you know, it’s going to be difficult to slow down much and not get too far behind.” 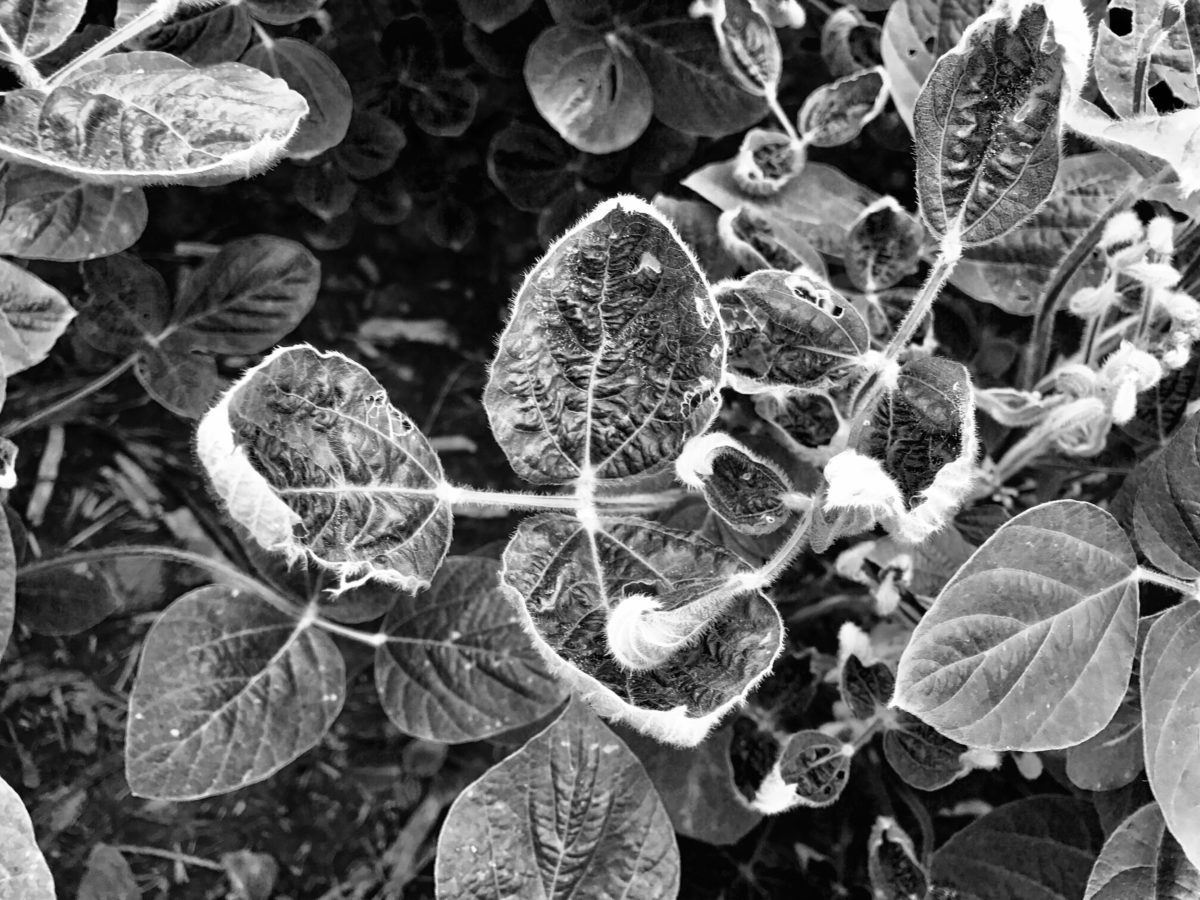 A soybean plant with early indications of damage from herbicide exposure.

Ross said the Dicamba controversy has larger implications for soybean growers and for several agribusiness giants. Dicamba is sold by Monsanto, BASF SE, and DowDuPont, and it is intended for use with Monsanto’s genetically modified soybeans. The beans, called Xtendimax, are designed to grow with a Dicamba application.

“There is fear there that if the beans are still available there is always that chance that someone could use some off-target product to spray it,” he said. “To eliminate that issue the only option is to pull the technology off the market completely.”

Ross said some farmers are planting the Xtendimax beans but not spraying Dicamba. They are depending on other herbicides, such as RoundUp. But many weeds have grown resistant to RoundUp.

“We know we weed resistance has been a challenge for farmers,” Monsanto product manager Ryan Rubischko said. “Having Dicamba as a solution, both for this coming season and beyond, is critical.”

Rubischko said Monsanto has not considered pulling  the soybeans from the market. Instead, he said, the company is focused on training efforts and a digital tool to assist applicators.

“We haven’t focused our efforts on that. I would highlight though, that we’ve spent a number of years breeding for this new technology. And so not only from a weed resistance perspective does this technology provide a solution but from a yield component.”

He said farmers are widely  adopting the new technology for the season.

Arkansas has the strongest restrictions so far on Dicamba, limiting applicators to spraying up to April 15th for row crop production this year. Rubischko said Monsanto has decided against selling the Xtendimax soybeans in Arkansas for the coming season.

Kentucky, Ohio and West Virginia have limited restrictions on Dicamba to those listed on the EPA label.  Kentucky certified commercial applicator Jon Futrell said the training is helpful but he will only be spraying Dicamba for farmers early in the season before plants have started to surface from the ground. 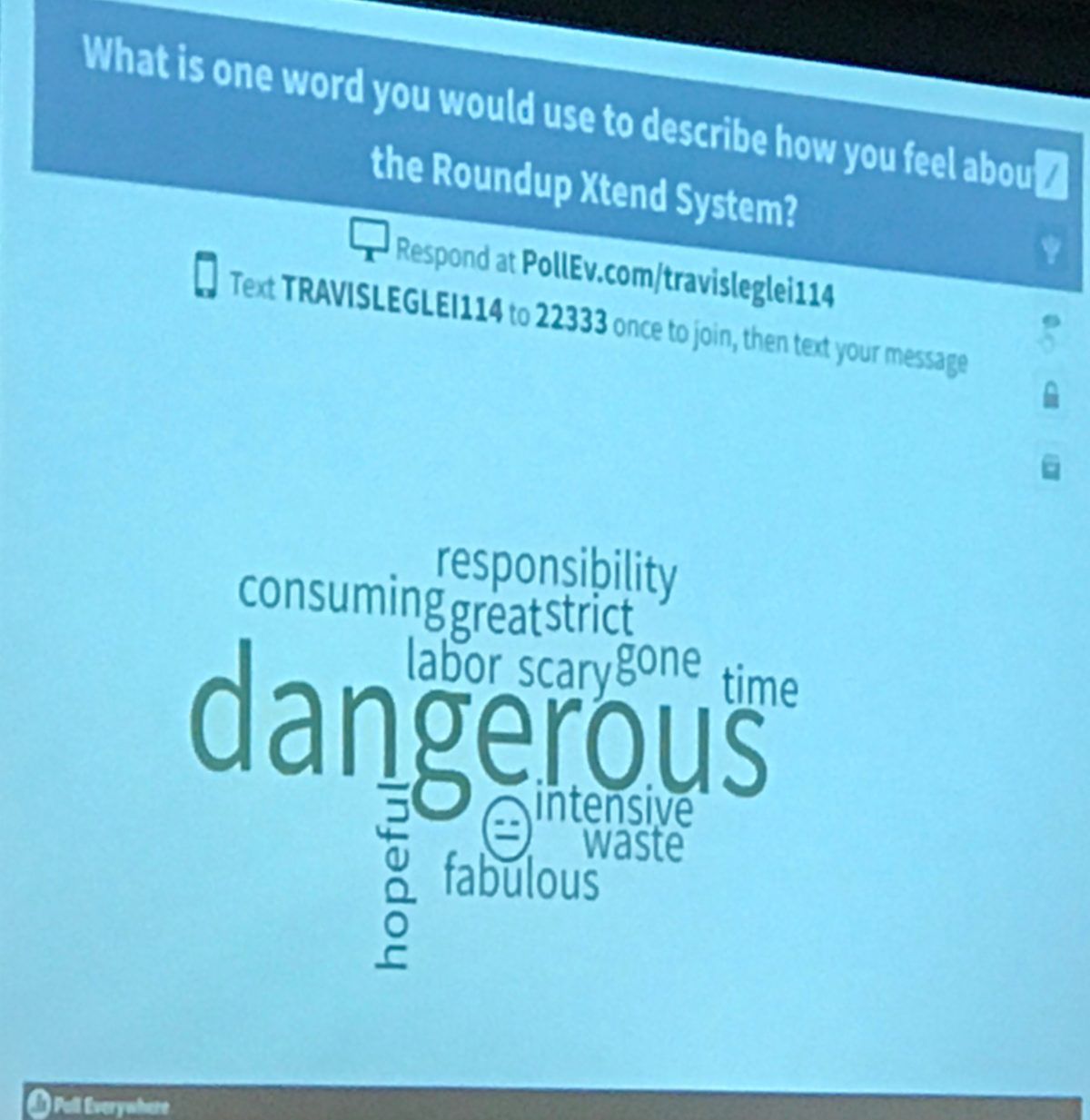 “Most people are pretty pessimistic with it and that’s kind of where I am,” he said. “I don’t want to take a risk in a sensitive area and lose my insurance, it’s just not worth it to me. I don’t want to jeopardize my livelihood for something like that.”

Soybean farmer Jeff McGrew said the weeds aren’t bad enough for him to take the risk either.

“After seeing the training today, I realized how much drift problems we could have and that’s a huge problem with me,” he said. “I don’t want to have to buy somebody’s bean crop out of my pocket.”

In the meantime, he said, he will use other herbicides and look at implementing cover crops into his soil management plan.