“I play everyday, mostly,” Hobby said, sitting next to his wife, Barbara.

“Well, I enjoy watching him play,” Barbara Hobby said. “He’s got health problems, can’t go out of town and play all the time.”

Billy and Barbara were in Cadiz, Kentucky, about 20 miles from their home in Princeton so that the 86-year-old pool player could compete in a weekly tournament. 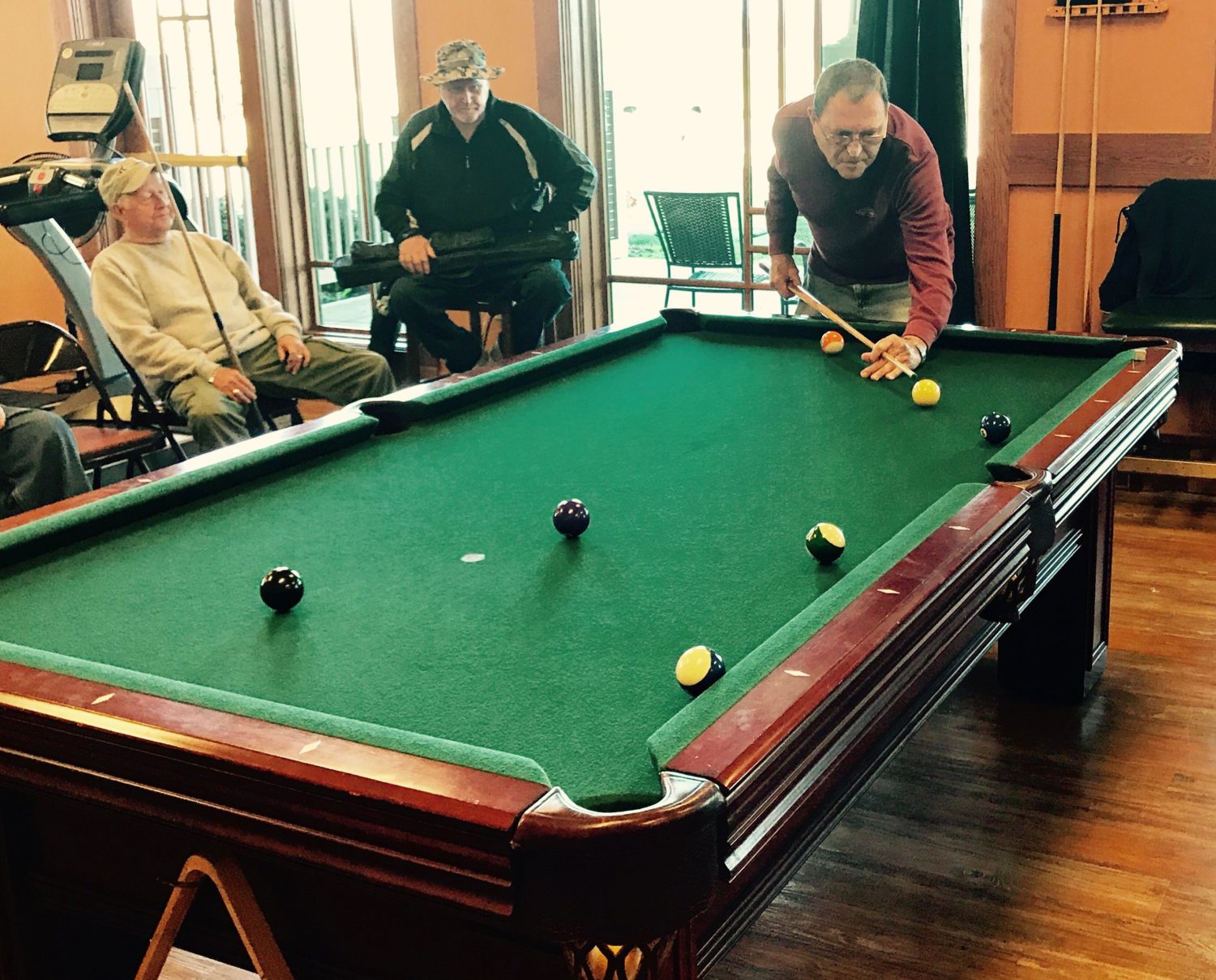 Local senior Glenn Harrold had come to play as well. He said the tournaments are filled with folks his age, many who have limited mobility or who deal with health issues such as Parkinson’s disease and cancer treatments.

“You watch some of these gentlemen walk around the table and you see the short steps that they take, it takes them a long time. But when they get over the table they shoot some fantastic shots.” Harrold said it’s an activity that keeps seniors active in competition and fellowship.

“It’s something they look forward to.”

You wouldn’t know immediately that Hobby has Parkinson’s disease. But as he explained his confusion over a recent dispute about the pool tournaments, his increasing tremor reflected his unease.

“You can come to the tournament down here, or Hoptown either one. And that’s what we don’t understand, is how they can keep having tournaments here and we can’t,” he said.

The senior center in Hobby’s town has banned the pool tournament over a dispute about tournament fees, raising questions about who calls the shots on activities at senior centers, and how much say senior citizens have in decisions on things important to them.

“It’s managed by the same management, you know, PACS,” Hobby said of the senior centers around the region.

Hobby is referring to Pennyrile Allied Community Services, known locally as PACS. The group manages the senior centers in the area, including Hobby’s center in Princeton, where pool tournaments were banned.

PACS Executive Director Harold Monroe said that his group provided more than 130,000 meals to seniors last year and transported seniors from nine counties more than 2.5 million miles to places they needed to go.

“So we are more than just a senior citizen pool playing service provider, ” Monroe chuckled.

The Older Americans Act provides funding to area management groups like PACS to fulfill part of the Act’s mission “to promote the dignity of older adults by providing services…that enable them to remain independent.” 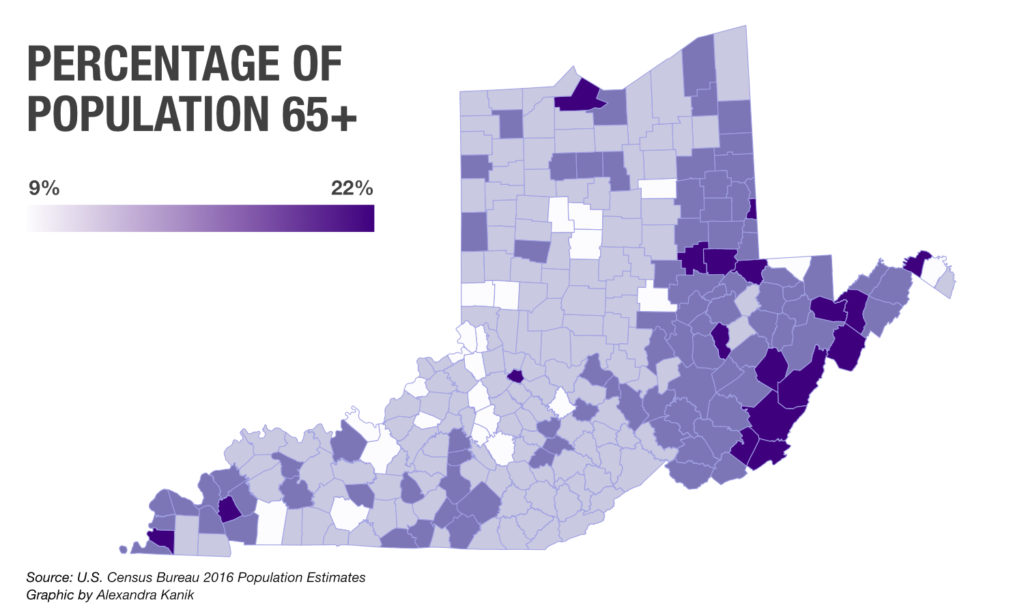 There are more than 2.7 million seniors in the Ohio Valley. As this aging community grows so does the lack of control many feel over many aspects of their lives. From transportation to health care, many seniors lose autonomy — even over their choices in recreation.

Murray State University sociology lecturer Whitney Cassity-Caywood said even something as simple as a pool tournament can be a pretty big deal.

“Seniors often struggle to maintain an identity later in life,” Cassity-Caywood said. A lack of control over decision making affects an older person’s sense of independence.

“For emotional well-being it’s important, and it’s important for our social work ethics, that we try and maintain and preserve the individual’s sense of empowerment as much as possible,” she said.

The federal funding for senior centers via the Older Americans Act carries a requirement that area management groups like PACS maintain an Age Advisory Board, and at least half the board should be seniors receiving services.

But PACS director Monroe said local centers have the choice to decide whether or not seniors are consulted about changes affecting services.

“First of all, they don’t have any input in the decision making because they’re not in a position of authority, ownership, whatsoever,” Monroe said. “If we make a decision to sell a coffeepot, that’s our decision to make as the providers of that service. ”

Which brings us back to the pool tournament. Jill Giordano chairs the Senior Aging Council for Princeton and voted to ban pool tournaments at the center. She said the tournaments were cancelled partially because the pool players were charging a fee to play.

“Well, that’s not appropriate,” she said.  “We are federal and state funded and we don’t provide services people have to pay for. More importantly, we have seniors, they don’t have two dollars to play pool.”

But the Princeton players tell a different story. 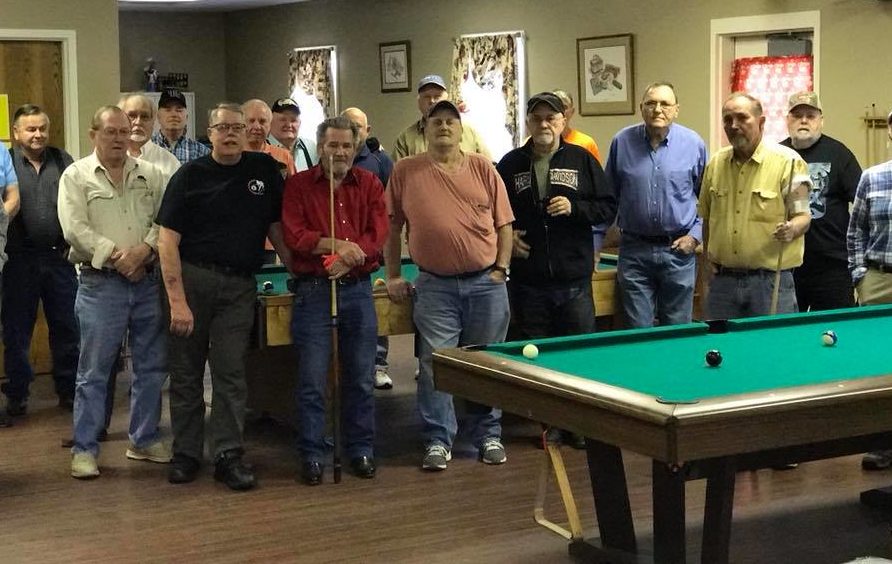 Some of the players in the Princeton pool tournament.

“It’s been very sad,” Lewis Gray said. Gray used to play in the Princeton tournament.  Gray said they removed the monthly tournament fee after a notice from the senior center.

“Well, that affected the morale of the gentleman first all because they were afraid they were going to lose something that they love,” he said.

Still, Gray said the board did away with the tournament and several pool tables, leaving just one in a central part of the center.

“So that the director could keep an eye on us,” he said. “She treats the old people very much like they’re children.”

Dennis Amundson, another senior Princeton pool player, said the group “was blindsided.” He feels seniors should have more say in a system that is supposed to support them.

“This is a democracy,” he said. “When it affects probably close to a majority of the folks that use the center on a daily basis, I’d say I’ve got a problem with that.”

Advisory Council Chair Giordano said seniors can still play pool, its just in a smaller room with only one table.

The seniors say that isn’t good enough. The players would have to draw straws to play with those limitations. Giordano says the decision is final.

Still, Billy Hobby is holding out for a better resolution.

“It helps me get out the door and go and it’s something I enjoy doing,” he said. “I just hope it’s settled one of these days and we can all get back to our normal days.”