According to a Thursday, May 31, news release from the governor’s office, the Federal Emergency Management Agency, or FEMA, confirmed final approval this week for a public assistance grant requested by Pine Grove. The $37,000 grant reflects a 75 percent cost share from FEMA. Pine Grove was among the communities included in a federal disaster declaration prompted by last summer’s flooding in north-central West Virginia.

Justice said a civil contingency fund under the governor’s control will provide the remaining 25 percent, or just over $12,000, for repairs at Pine Grove which include repairing units for dozens of individual property pump wells.

Kimberly Shatney lives just outside Pine Grove, West Virginia, an incorporated town of about 500 people with a big problem. Behind a small sandwich shop in town, she points to the ground caked with what looks like dry mud.

“This is all raw sewage. All of that, all of this is raw sewage,” Shatney said, shaking her head. 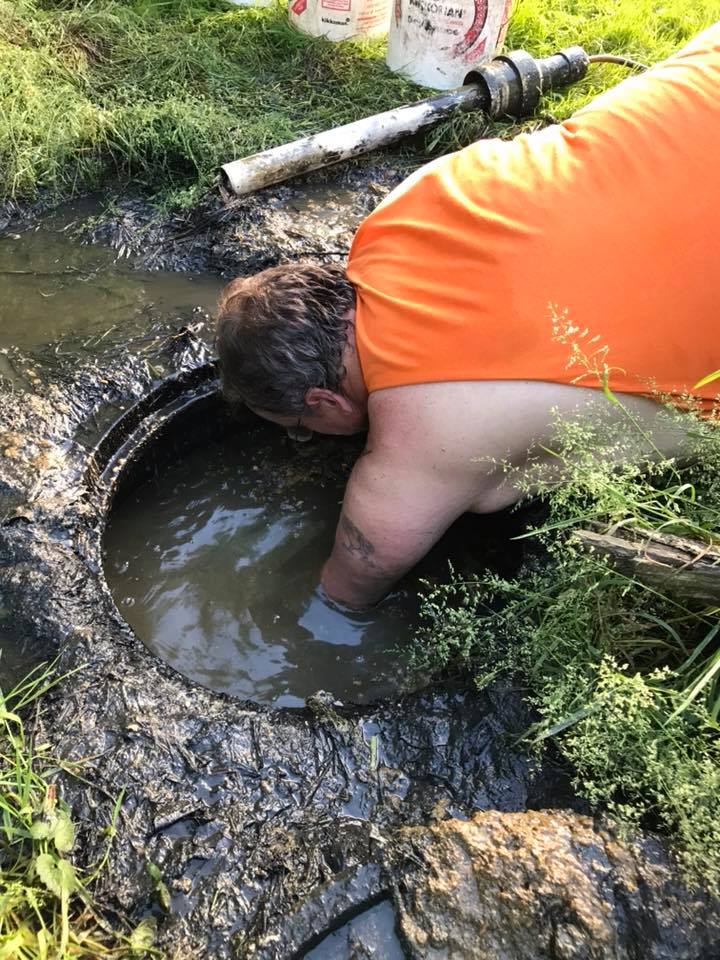 Shatney said a few days earlier employees here had to use a portable toilet across the street, and a stream of raw sewage ran behind the shop. It also ran through many residential yards.

“[Employees] would have to come out and either walk all the way out into the middle of the road to put the trash here,” she said “Or if they were in a hurry or the only ones in the store, they would go straight through, dump the trash and then go back out, and then serving fresh food.”

Some frustrated residents have taken to posting video of the incidents on Facebook.

The sewage system backs up into yards and basements so often that many residents became accustomed to using buckets and throwing the refuse in nearby streams.

Unfortunately, problems like these in Pine Grove are common throughout small towns in Appalachia, where communities often lack the funding to keep up aging and inadequate infrastructure.

Accurate data on the extent of the region’s sewage problems are hard to come by. A 2005 report commissioned by the Appalachian Regional Commission found that in the few places where careful surveys have been done “substantial numbers of people have failing onsite systems or no wastewater treatment systems at all.”

That study by the University of North Carolina’s Environmental Finance Center looked at the region’s water infrastructure needs and reasons for funding gaps.

At the time, the authors estimated that at the low end Appalachia had about $14.4 billion in wastewater infrastructure needs. Wastewater systems in the region tend to be smaller than those in the rest of the country, on average, with about a third of people in Appalachia served by small and medium-sized systems. In general, the smaller the system, the higher the costs per person served. 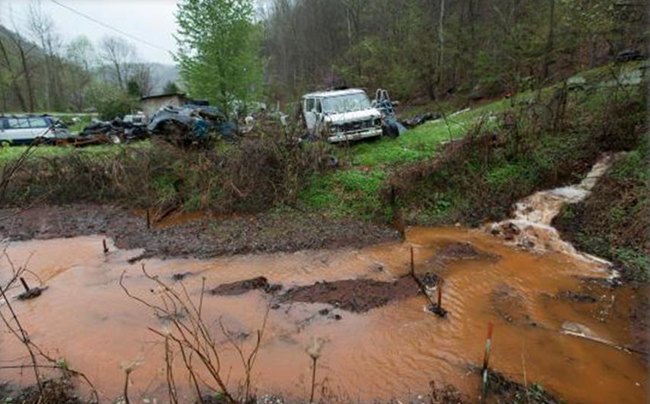 A contaminated watershed in southeastern KY.

These utilities are more likely to have small and shrinking customer bases, a high proportion of low-income customers, and a rapidly changing tax base due to the declines in the coal industry, which often provided a significant source of revenue.

Many water system managers and county officials are left with few funding options. The study found that many households in the region already pay a higher proportion of their income for water and sewer services, so increasing rates is not an attractive option.

Compounding the problem, relatively few communities in Appalachia’s disadvantaged counties have credit ratings that allow access to the capital market to secure loans to improve facilities.

None of this is news to Tracy Nolan, community outreach director for Red Bird Mission, a faith-based service organization that has served the remote southeastern corner of Kentucky since 1921.

“We keep coming up against the issue of straight piping, and no access to city sewer, and families that cannot afford to put in septic systems,” Nolan said. “That creates a barrier.”

Nolan and others at Red Bird worked with the University of Tennessee’s schools of nursing and civil engineering to measure the contamination of water sources and devise strategies to improve health and environmental quality. 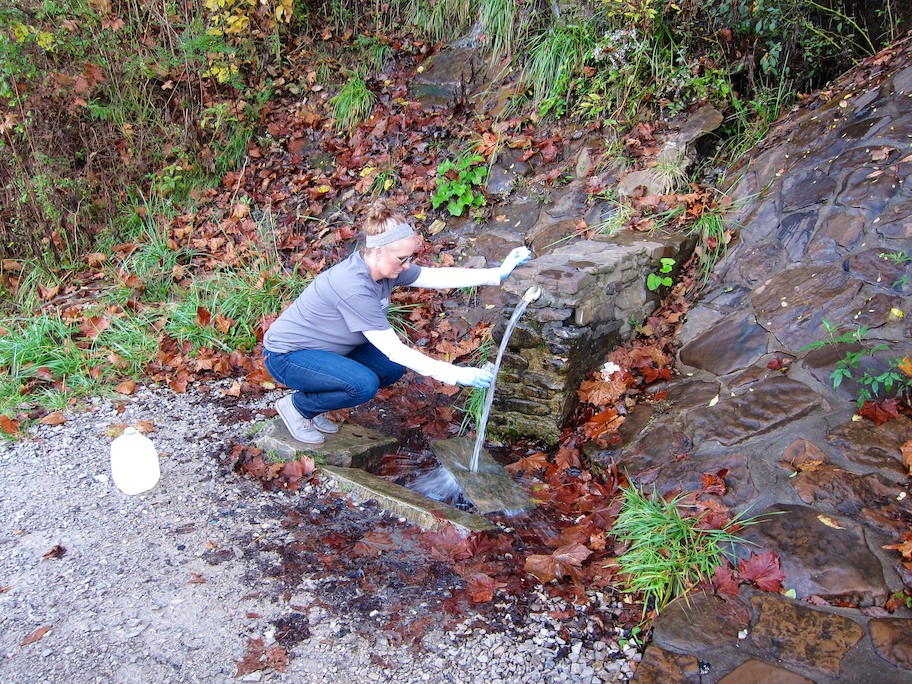 Courtesy U. of Tenn. Office of Sponsored Programs

Water sampling from 2012-2014 in the Red Bird River watershed found as many as 64 percent of the sites exceeded the Environmental Protection Agency threshold for E. coli bacteria. The mission helped researchers find the springs and wells many people used to gather drinking water and found many of those, too, had E. coli.

Nolan said that by working with universities, faith and civic groups, and federal agencies they have won grants to provide more septic tanks. 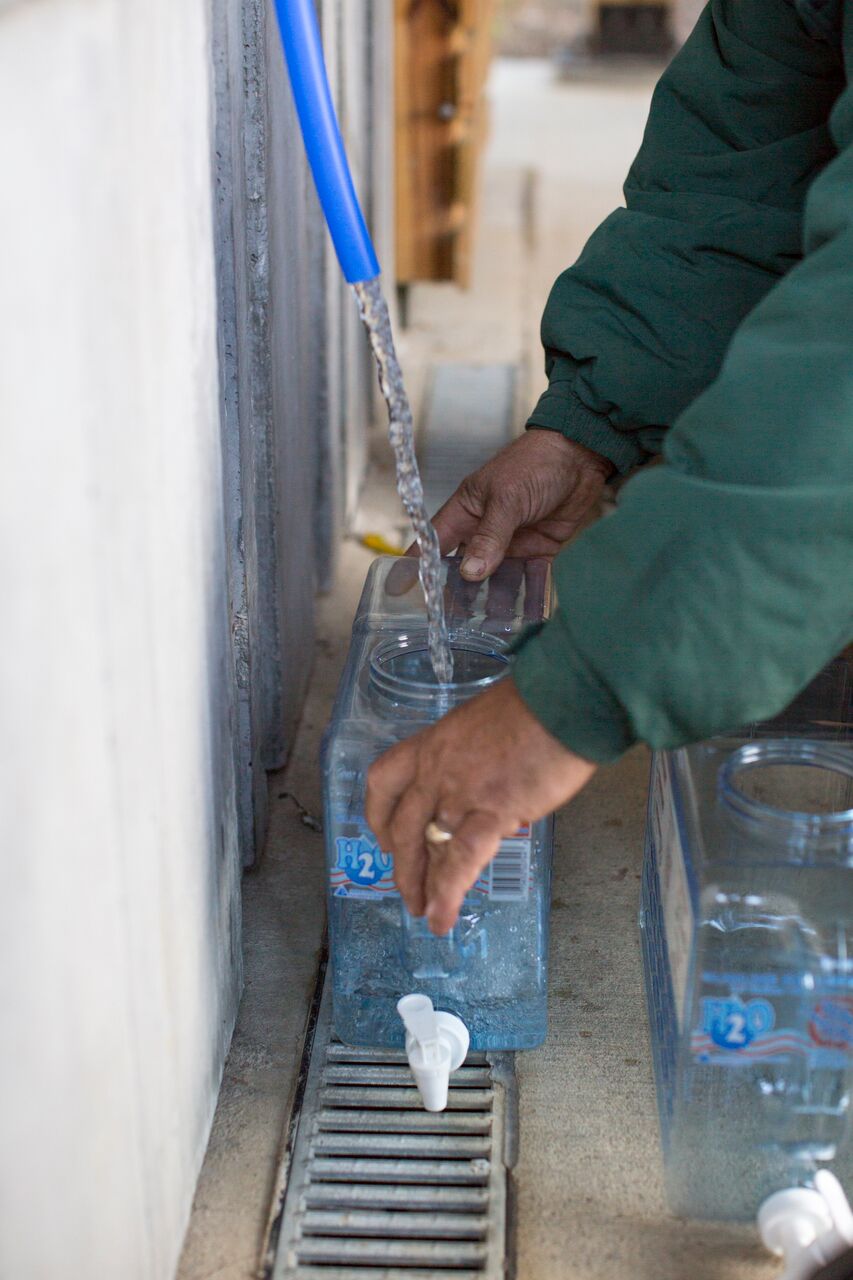 A client using the clean water kiosk at red Bird Mission in KY.

“It’s just a community taking care of ourselves, working with all partners with respect, and just not sitting back and waiting anymore,” she said.

She expects the groups involved will be installing dozens of septic systems but as they do they also find more work to do.

“We’re slowly chipping away at it, but also identifying more people in need.”

In its 2015 strategic report, the ARC reported strong progress in the percentage of homes in Appalachia with complete plumbing. Throughout the region about 97 percent of homes have plumbing, about in line with the national rate. But as the Red Bird watershed and Pine Grove show, many problem areas persist.

In Pine Grove, the West Virginia Department of Environmental Protection reports that environmental enforcement inspectors have been monitoring the situation. The town was issued a consent order that detailed the steps to address issues, including a corrective action plan that will show how the town intends to address problems.

The town’s state senator, Charles Clements, toured the community and hopes to facilitate more conversations like those in Kentucky, as well as seek out other innovative solutions to rural sewage challenges.

“This community deserves more than to be like a third world country,” he said.