Jimmy Tosh sells a lot of pigs. He is owner and CEO of Tosh Farms, Tosh Pork, and Bacon By Gosh, in Henry County, Tennessee, and has 84 contracted barns in the region where farmers grow pigs for his products.

On a recent July day, Tosh craned over some 1,200 piglets and reflected on how recent market disturbances have affected his business.

“These pigs in January were selling for the $75 to $80 dollar mark,” Tosh said. “Because of seasonality and the effect of the tariffs these pigs now are in the $16 to $18 dollar range.”

These little piggies will grow to be around 280 pounds before they head to the market. But with 25 percent of his pork products depending on export markets, the growing trade war between the U.S. and China could have Tosh looking to find the pigs new homes. 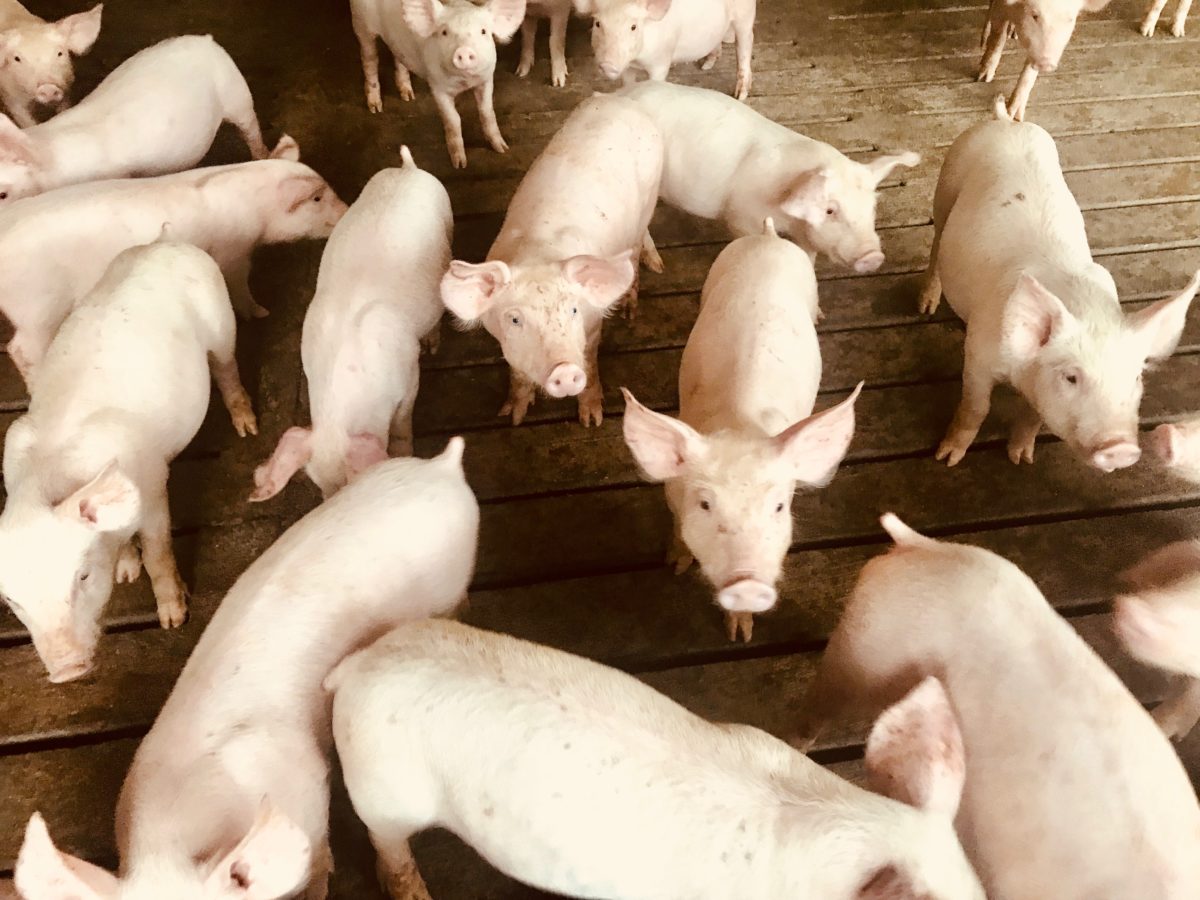 With hog prices dropping, will these little piggies go to market?

“China is our fourth largest market by value, it’s our third by tonnage,” he said. “They take a lot of the pork that we do not consume in this country; the heads, the feet, livers and stuff. That market has gone from a thousand metric tons three months ago to zero last month.”

Other tariffs are also having an effect. As with any successful business, Tosh has plans to expand with a new unit that would produce about 225,000 pigs a year. He needs another 40 barns to do that. With the steel and aluminum tariffs in place, the extra costs for metals used in construction will increase his costs by $15,000 and $17,000 for each new barn.

“Whether we build another unit after that really depends on the market conditions we are in,” Tosh explained. “The tariffs, the amount of hogs, and mainly are we going to be profitable or are we going to lose money?”

This week the administration moved to impose tariffs on an additional $200 billion worth of Chinese products on top of the $34 billion in goods already targeted for import taxes. China has already retaliated against that earlier round of tariffs, and other trading partners from the E.U. to the Americas have all put U.S. agricultural products in the crosshairs again.

The National Pork Producers Council reports that U.S. producers face punitive tariffs on 40 percent of total American pork exports to China and Mexico, and hog, corn and soybean farmers all fear they could be losing major customers for their exports.

Farm country is closely aligned with Trump country. But as the Trump administration escalates its trade dispute with China, farmers are among the first to feel the pain.

The situation is just as dire for U.S. soybean farmers who are losing contracts with China. 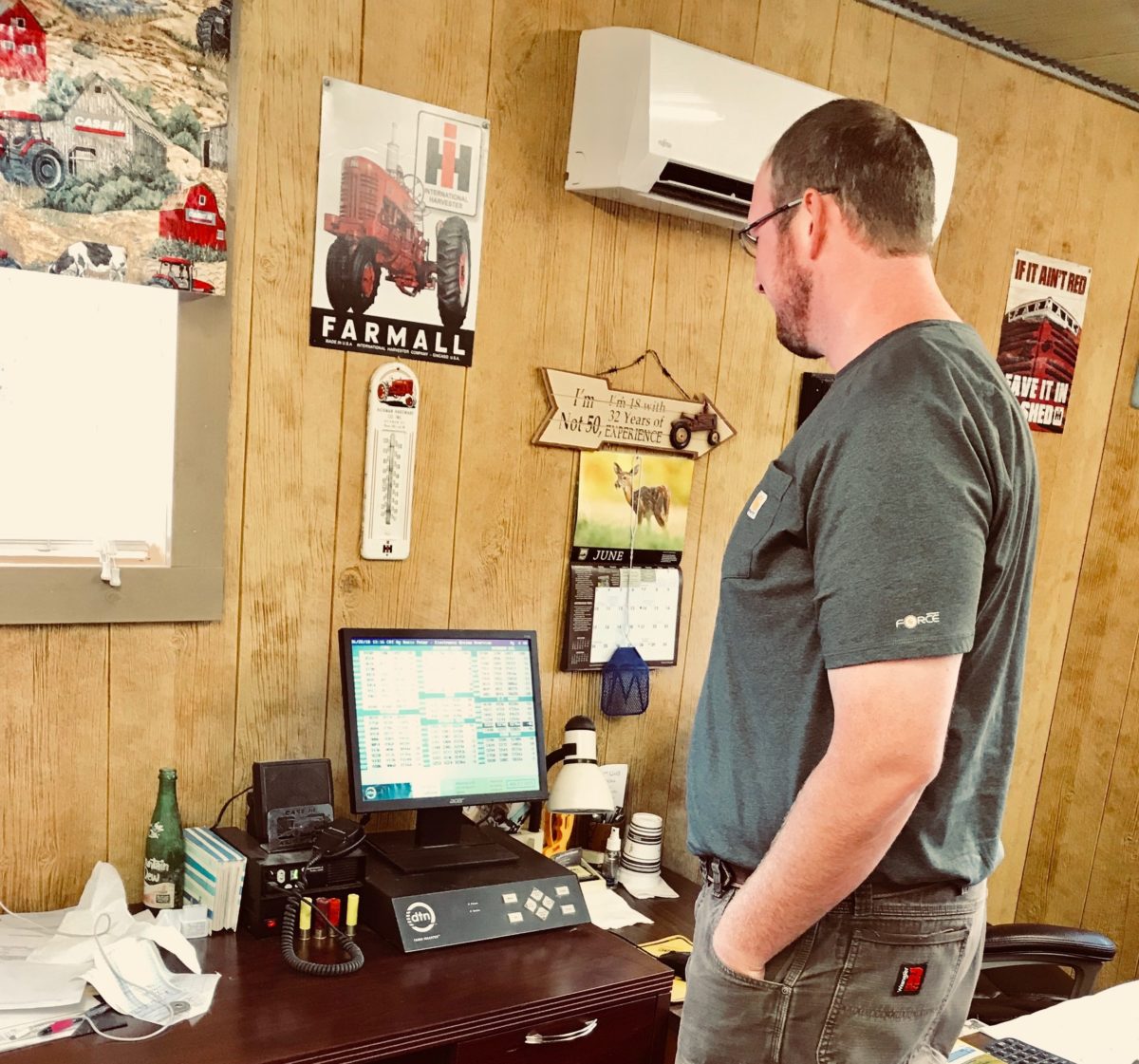 “Here is our electronic grains overview,” he said, tapping at a keyboard. Soybeans that had been trading at more than $10 at the beginning of the month were now down to under $9.

“That is the price per bushel and when you are looking at thousands of bushels, gosh, at 60 or more an acre, that price adds up very quickly,”  Goodman said.

Soybeans are the top agriculture export for the U.S. and China is the top buyer. The commodity’s price dropped to a 10-year low after China announced its retaliatory efforts. In 2017 more than half of the soybeans grown in the Ohio Valley and the U.S. went to China. Goodman said farmers are already dealing with a near 50 percent loss in profit over the last few years.

“When you go and start picking fights with people that buy your products, that adds a whole ‘nother level to it,” Goodman said. 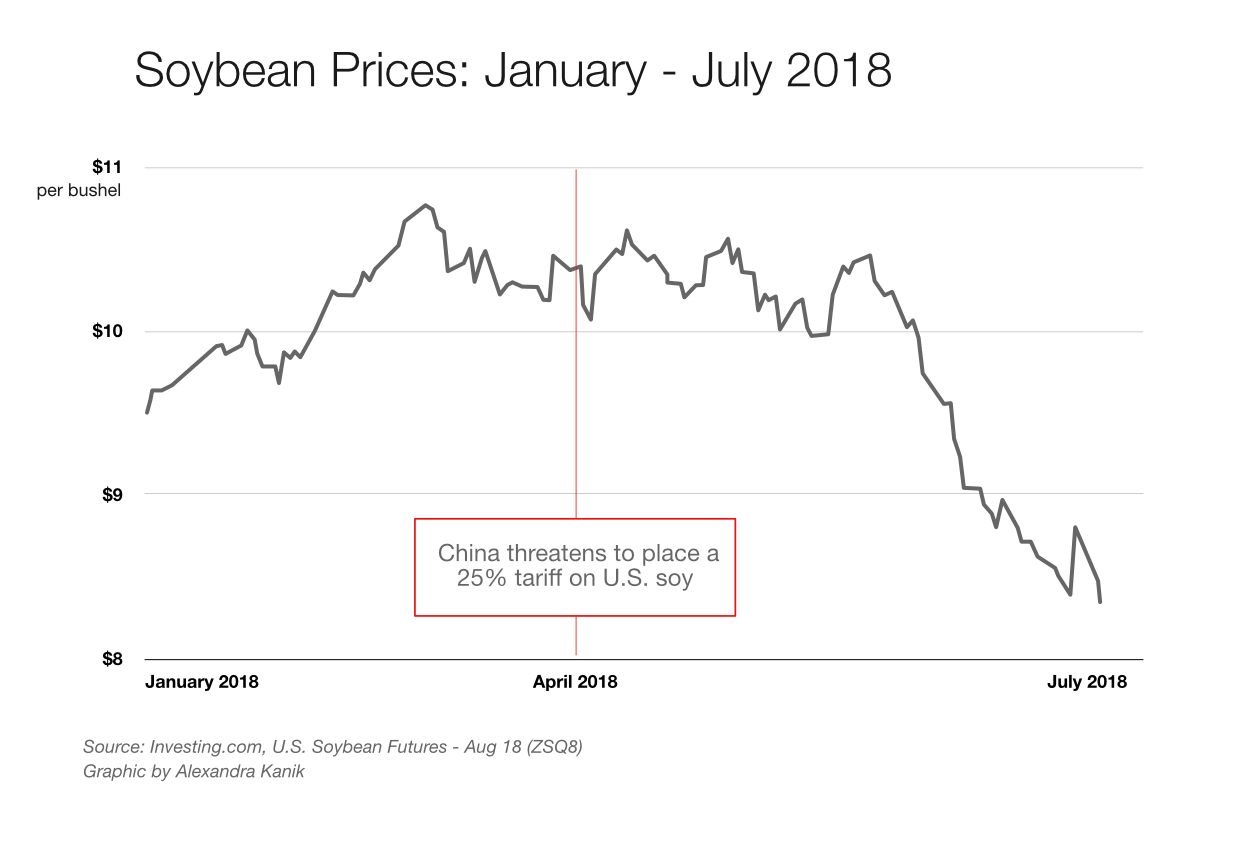 Countries responding to tariffs implemented by President Trump have said they will retaliate by hitting his base of supporters hardest, farm country. That carries a cruel irony for Goodman. He said he is a blue dot in a sea of red.

“I would definitely say that I am kind of the black sheep in the area because I didn’t vote Trump,” he said.

“Whenever we start to threaten other countries with withholding grain or something like that they just turn around and buy from somebody else,” Goodman said. “A soybean in Kentucky is the same as a soybean in Brazil.” 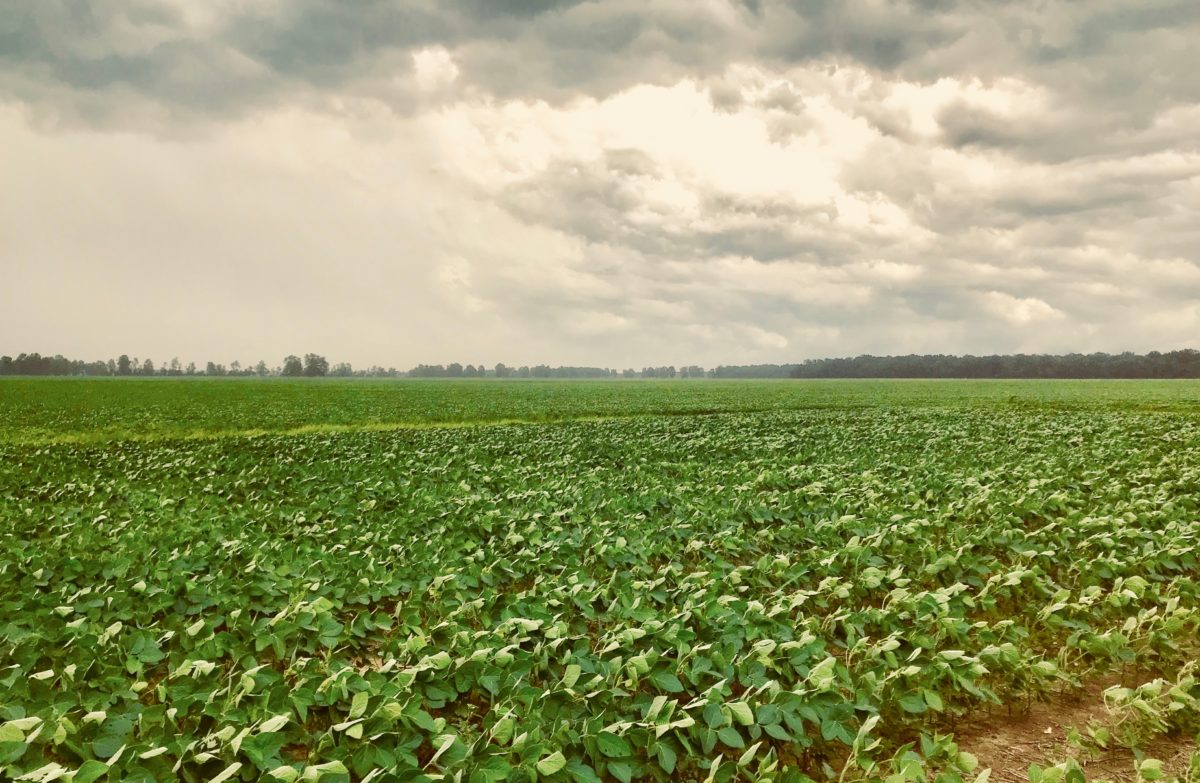 The President’s attempt to bring down the U.S. trade deficit has instead increased tension with trading partners, according to David Laborde with International Food Policy Research Institute.

“This is why policy makers are very careful not to play short-term games because there is long-term cost,” Laborde said.

Laborde said there is now a “big premium” for Brazilian soybeans and it is forcing U.S. farmers to have to sell for less in order to compensate for tariff effects.

“We are going to see countries like China aim to diversify their supply chain and start to do new investments or build new trade relations with other countries around the world,” Laborde said. “You know you create a distortion, you create a conflict and policies and markets are going to react all over the world and with a very different pattern of production at the end.” 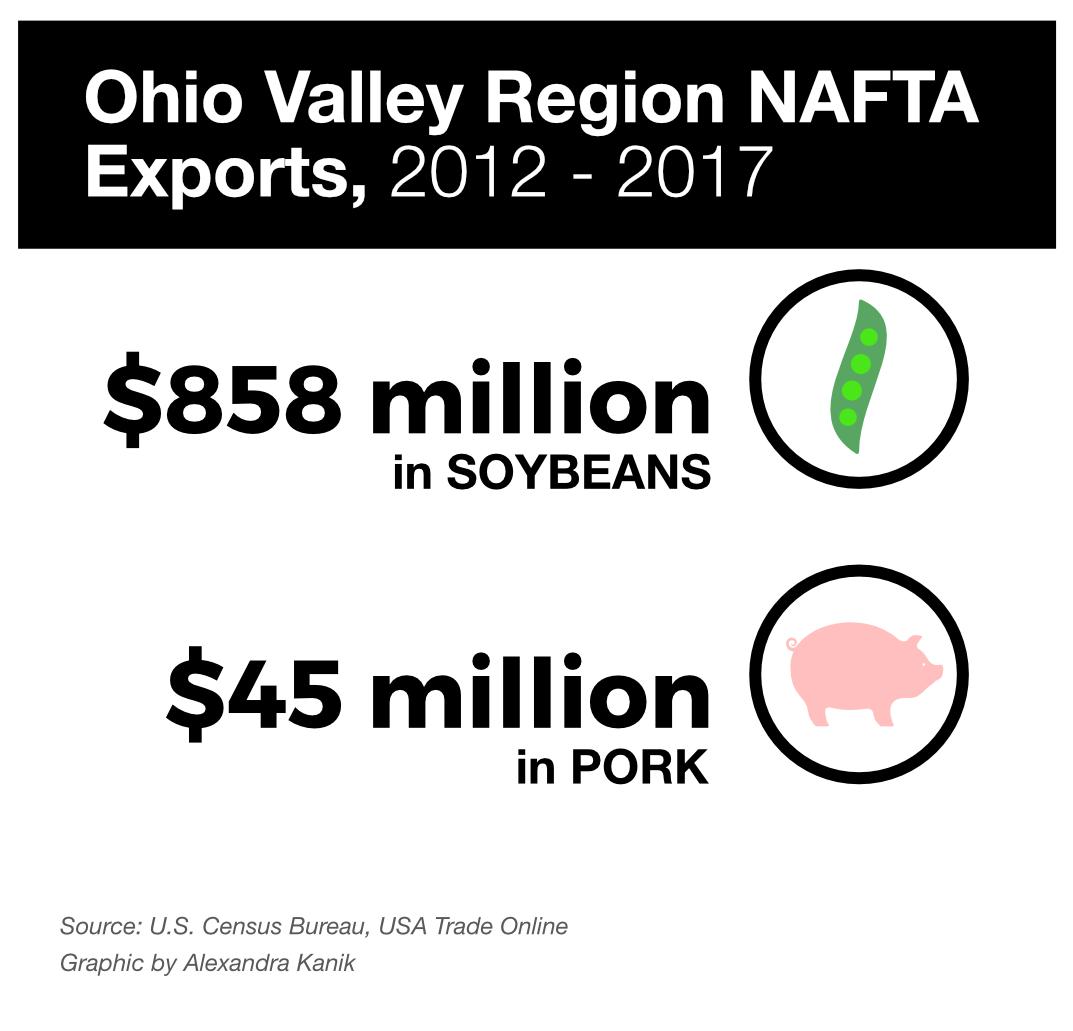 He said U.S. farmers are simply not in position to absorb these prices with the consecutive annual losses in farm income. “We are in a place where people can go bankrupt if the low prices remain,” he said.

When soybeans became the number one export commodity, many farmers prepared for an increase in demand by buying more land and seed. Those farmers will be the ones with the most to lose in the market distortions brought on by a trade dispute, according to Laborde.

“In the end someone still has to pay for this,” Laborde explained. “So it means that insurance premiums will have to go up and because [the U.S.] is heavily subsidized, the government will have to find money to compensate the insurance to pay the subsidies of the insurance schemes.” 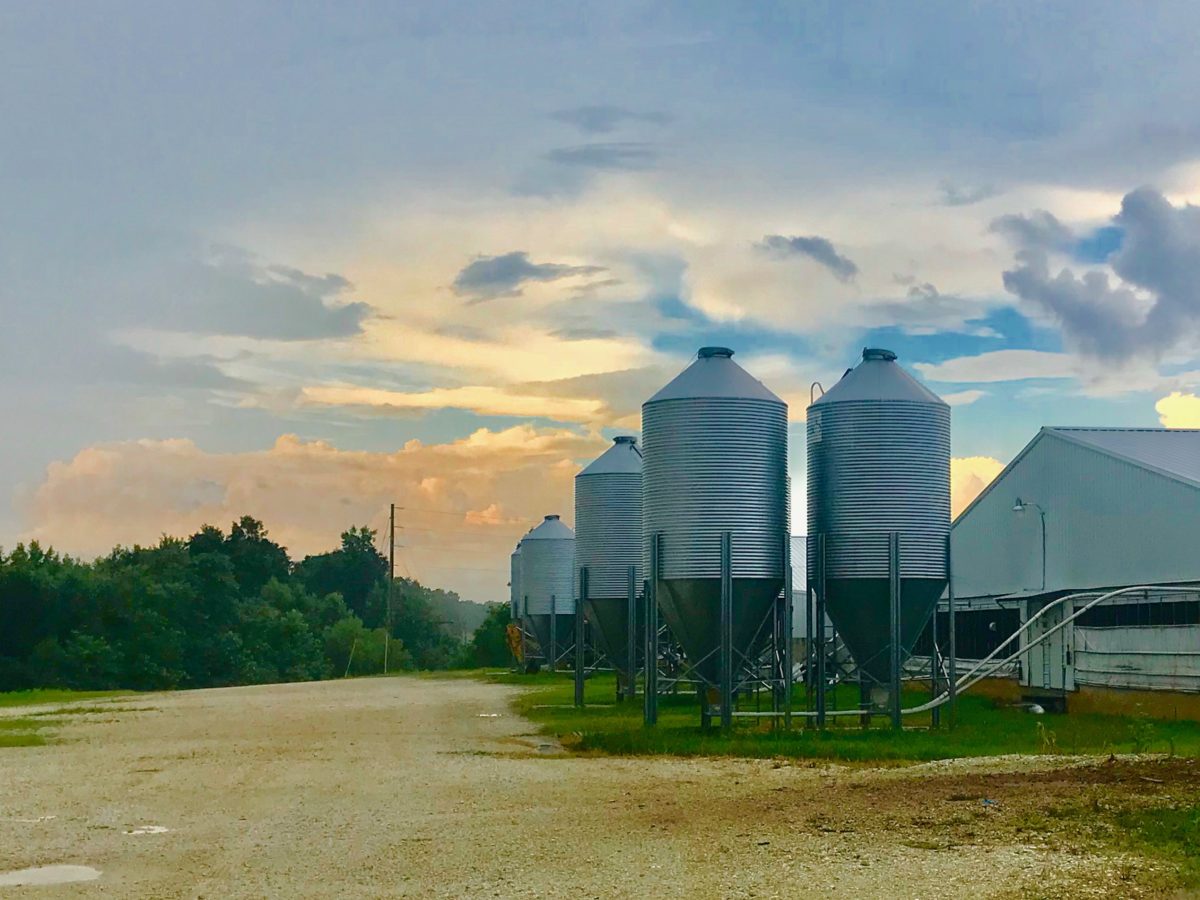 Laborde said that all the trade decisions are now coming from the executive branch of government.

“I think there is a lot of bargaining power from Congress that is not used, so maybe they don’t want to enter into a conflict before the midterm election,” Laborde said. “Just two months of this kind of trade war activity can move investors in another direction for two decades.”

But it is not yet clear if the trade troubles will move the President’s base of support.

Farm groups have kept a soft tone as Trump has pushed for new deals, including his attempts at renegotiating the North American Free Trade Agreement. Eddie Melton, an official with the Kentucky Farm Bureau, reflects the majority of farmers in the Ohio Valley who view the President’s actions as necessary.

Melton is hopeful. He said if China isn’t willing to move in the direction the President wishes, maybe India will.

“I think this gives us an opportunity to expand markets,” Melton said. “I really do.” 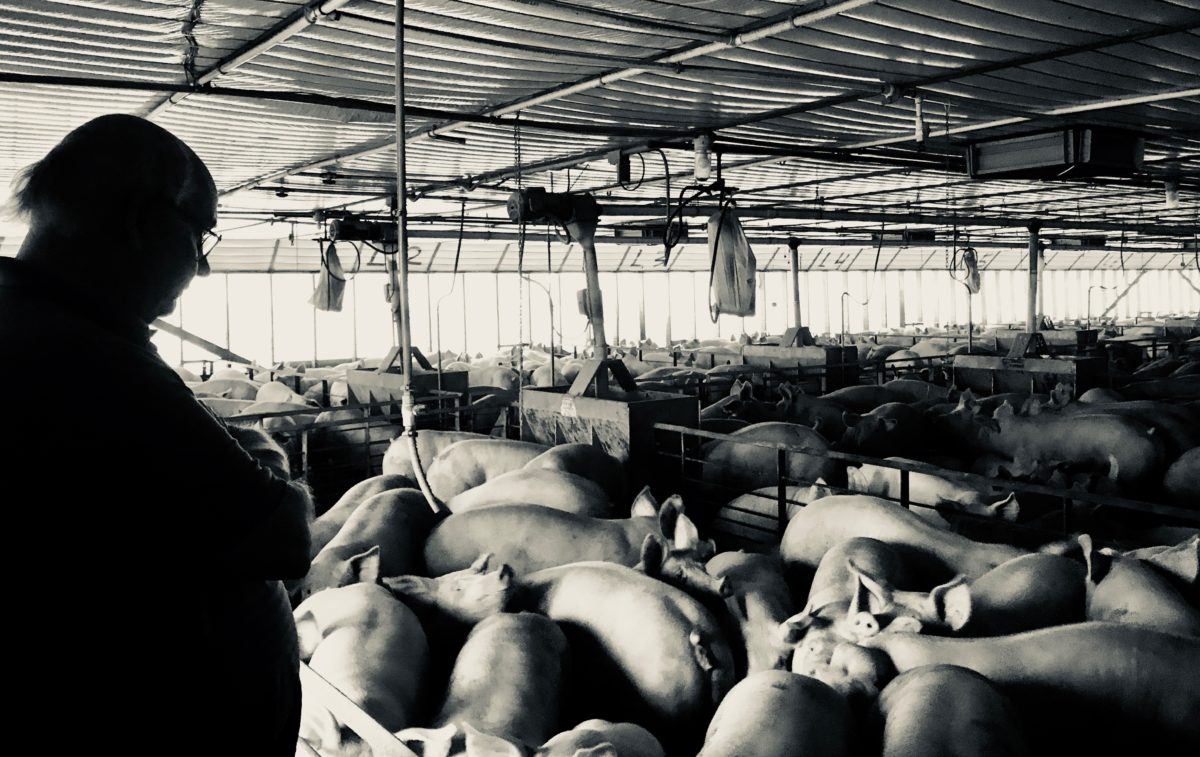 Jimmy Tosh looks at hogs ready for the market.

Hog farmer Jimmy Tosh is not so sure. “I don’t support his tariff position. I have always been a free trader,” he said. “I’ve been Republican my whole life but I do have concerns right now,” Tosh said.