An area roughly the size of Delaware has been mined for coal in Appalachia using mountaintop removal, according to a new study published in the journal PLOS ONE.

“As far as we know, this is really the first time that there’s been this yearly dataset for central Appalachia,” said Andrew Pericak, a research analyst at Duke University and lead author of the new study.

“The purpose of creating this data set is to have it as a resource for anyone to use including scientific researchers, nonprofit groups, public health groups, maybe even local or state governments just so they can really have a good understanding of where mining is occurring.”

The researchers analyzed more than 10,000 images taken by the Landsat satellite system, operated by the U.S. Geological Survey and NASA.  Landsat has taken a photo of every location on Earth every 16 days since the 1970s.

Landsat and other satellite imagery have been a boon for scientists and advocacy groups that want to track changes to the planet over time. For example, the World Resources Institute and its partners in 2014 launched Global Forest Watch, an open source platform that tracks global forest cover and fire activity. 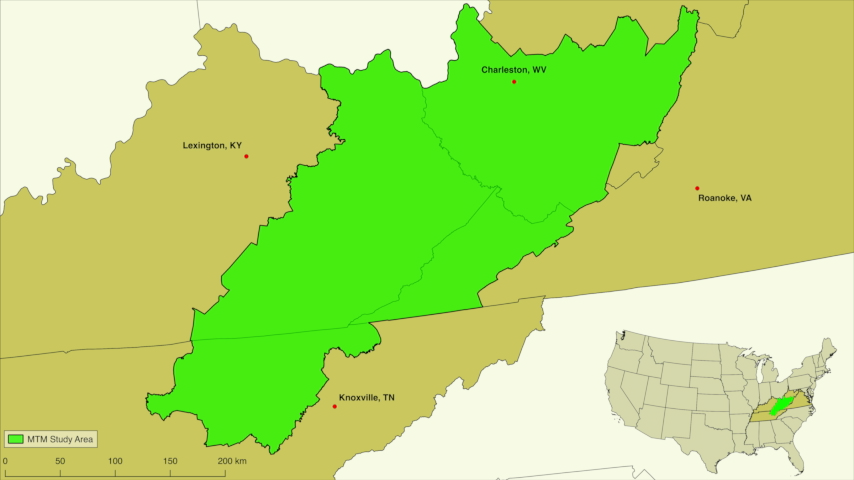 A map of the area (green) where the study was conducted. CREDIT: SkyTruth

“This is a trend that we’re seeing all over the place,” Pericak said. “But, I really don’t think this this sort of study of a yearly data set of coal mining in Appalachia would have even been possible five years ago.”

To crunch all of the satellite images, Pericak and his team turned to Google. The tech giant has uploaded an immense amount of Landsat’s catalog into the cloud and made its Google Earth Engine platform open for anyone to use.

Pericak said without Google this amount of data could have taken years to process.

“Whereas, because we’re using Google’s computing power,” he said, “it could produce these maps in just a few minutes.”

The new data draw upon earlier work published by Sky Truth in 2009. That dataset showed snapshots of mountaintop removal mining in 10-year increments starting in the mid-1970s. Christian Thomas, a geospatial analyst with SkyTruth, said other researchers were able to use the data they pulled together to investigate the environmental and health impacts of surface mining.

That 2009 dataset required a lot of human input, whereas the new map and data are almost completely automated, which will allow regular updates, he said.

“All they really need is someone to click the run button,” Thomas said.

Overall, the researchers found about 3.5 percent of the study area, or about 720,000 acres of central Appalachia, is directly impacted by surface mining between 1985 and 2015.

Once the older SkyTruth dataset is incorporated, the total number of acres of land disturbed by mining tops 1.5 million acres, or about 7 percent of the region.

“That’s about 2.8 times the size of Great Smoky Mountains National Park,” Pericak said. “So, it’s a really big area that even I still have [trouble] sometimes wrapping my head around just how big of an area that is.”

Information on how much land has been approved for surface mining is already available in the permits coal mine operators must get before they begin production, but Pericak said permits alone offer an incomplete picture.

Although the goal of the project wasn’t to analyze if and how mountaintop removal has changed over the last 30 years, the researchers wanted to give an example of how the new data could be useful.

They compared how much land was mined to how much coal was being produced on an annual basis, according to federal historical surface mine coal production data.  Between 1985 to 2005, the researchers found it took about 10 square meters of land to produce one metric ton of coal. By 2015, that amount of land needed to get the same amount of coal had tripled.

“It matches up with some predictions that energy analysts have had about just that it takes more effort now to get coal as it becomes a diminishing resource,” Pericak said. “We think it’s a really strong way to demonstrate that even though we’re really just presenting these maps that can be tied to a lot of different spacial or a lot of different datasets to reach some new and interesting findings.”