During a sometimes contentious confirmation hearing Wednesday on his nomination to lead the Environmental Protection Agency, Acting Administrator Andrew Wheeler was pressed by members of the Senate Committee on Environment and Public Works about the impact of the government shutdown on the agency.

Wheeler noted one casualty of the ongoing partial government shutdown, now in its fourth week, is that a long-awaited plan on regulating the PFAS group of chemicals has been delayed.

Fluorinated PFAS chemicals include PFOA, or C-8, which has been detected in several water systems in the Ohio Valley. Some municipalities in Ohio and West Virginia have been dealing with C-8 contamination for decades.

“Our PFAS management plan we were hoping to unveil it next week with the shutdown it’s going to be delayed slightly,” Wheeler told the committee. “It’s in the middle of inter-agency review.” 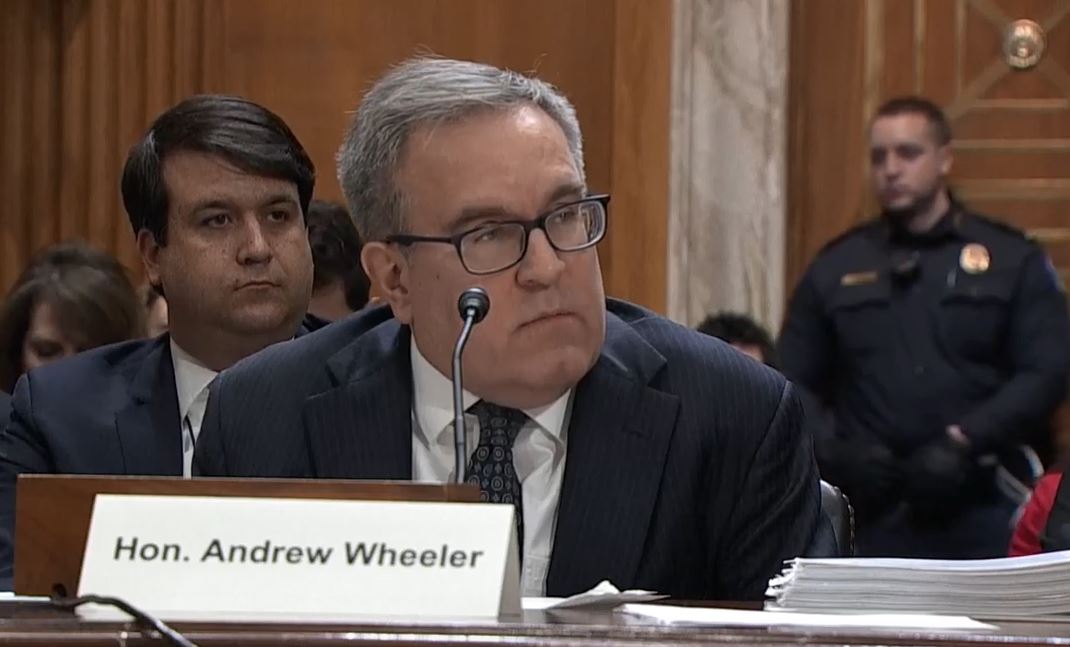 EPA has previously said the management plan would recommend whether some of these widely-used toxic chemicals used to make non-stick items should be declared “hazardous” under the federal Superfund law.

If the agency takes this step it could gives states more options for cleaning up contamination.

The agency has said it is also considering whether it should set legally enforceable limits for PFAS in drinking water, a move that has garnered bipartisan support.

In an exchange, Capito said she “couldn’t tell” from Wheeler’s earlier statements on the PFAS plan if the document would contain drinking water limits.

“We are going to be recommending and moving forward on a number of different areas under a number of different statutes we’re looking at on the water side as well as the CERCLA [Comprehensive Environmental Response, Compensation, and Liability Act], Superfund side and the TSCA [Toxic Substances Control Act] program as well,” he said. “This is going to be, when it comes out, our management plan, a multimedia approach to dealing with PFAS/PFOA.”

“I can’t go into the specifics of what’s in the plan because it’s currently in inter-agency review,” Wheeler replied.

Wheeler’s comments come after months of EPA efforts to highlight  the issue. Last year, the agency held a nationwide meeting on PFAS contamination and a series of public listening sessions across the country.

Some environmental groups have expressed concern the agency will downplay the issue given the Trump Administration’s goal to roll back many environmental regulations.

Last year, a draft report from the Agency for Toxic Substances and Disease Registry, a part of the Centers for Disease Control, was blocked by federal officials.

It found these fluorinated chemicals can endanger human health at levels 7 to 10 times lower than the EPA’s current recommended exposure limits.

The agency’s point person for the PFAS plan, Peter Grevatt, director of EPA’s Office of Ground Water and Drinking Water, retired from the EPA in December.

Wheeler also faced tough questions from Democrats on his beliefs over climate change and the extent to which, if confirmed, the EPA under his leadership would focus on reducing heat-trapping greenhouse gas emissions. Multiple lawmakers pointed to several high-profile rules issued by the agency last year — including the Affordable Clean Energy Rule and Clean Car Rule — where EPA’s own analysis shows carbon emissions will increase.

Sen. Sheldon Whitehouse, a Democrat from Rhode Island, questioned the nominee on his relationship with his most recent former employer, coal company Murray Energy.

After leaving the Senate in 2009, Wheeler worked as a lobbyist for at the D.C.-based law firm and lobby shop Faegre Baker Daniels. One of his clients was Murray Energy. During the hearing, Wheeler said for the last four years he worked with Murray Energy he worked exclusively to shore up the pension fund for the United Mine Workers.

Murray has been an outspoken critic of the Obama administration’s EPA and its efforts to limit greenhouse gas emissions. Weeks after President Donald Trump’s inauguration, Murray gave the White House a wish list of environmental rollbacks, many of which have now been completed.

Whitehouse sought more information on Wheeler’s involvement in the so-called “Murray Action Plan,” including whether he sought a meeting with then-EPA Administrator Scott Pruitt.

“Can you tell me now how many meetings with officials for Bob Murray did you arrange, attempt to arrange or attend and with whom?” Whitehouse asked.

After prodding, Wheeler said two — a March 2017 meeting with Energy Secretary Rick Perry and one at the White House. He reiterated he had not attended nor set a meeting at EPA to discuss the plan.

The response did not seem to satisfy Whitehouse.

“I don’t want to play ‘gotcha’ with you,” he said. “What I do want is true, factual complete answers from you.”