Inside the Bluegrass Hemp Oil store in Lexington, Kentucky, the CBD oils and lotions lining the walls have an origin story — a story of a family’s struggle.

“We took a huge risk, to be perfectly honest, because we didn’t know. We weren’t trying other people’s CBD products that were out there,” Bluegrass Hemp Oil Co-owner Adriane Polyniak, said.

Polyniak’s son, Colten, began inexplicably having violent seizures in 2009 when he was three. He was diagnosed with idiopathic generalized epilepsy. 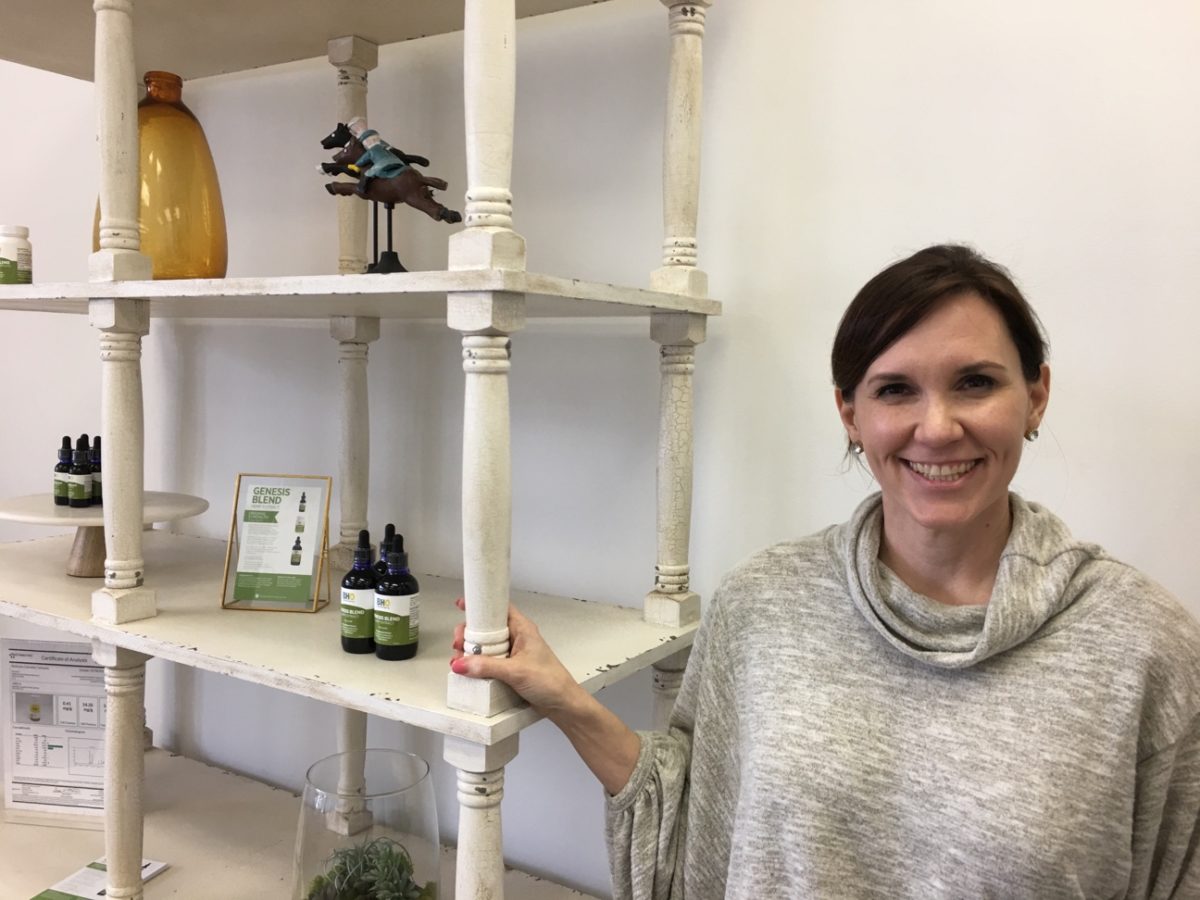 Adriane Polyniak, posing by her products inside Bluegrass Hemp Oil in Lexington, Kentucky.

“Essentially what that means is that he went from zero seizures to hundreds of seizures in a week, and the doctors didn’t know what was causing it,” Polyniak said. “We started a game called ‘pharmaceutical roulette’ — a lot of epilepsy parents are familiar with it — where we try a lot of different types of epilepsy medication to bring seizure relief to our kids.”

Adriane’s family saw on online forums that CBD might be of help for seizures. CBD, also known as cannabidiol, is a compound commonly sourced from the flowers of hemp, a type of cannabis related to marijuana. CBD doesn’t get a user intoxicated, unlike the better known cannabis compound, THC. 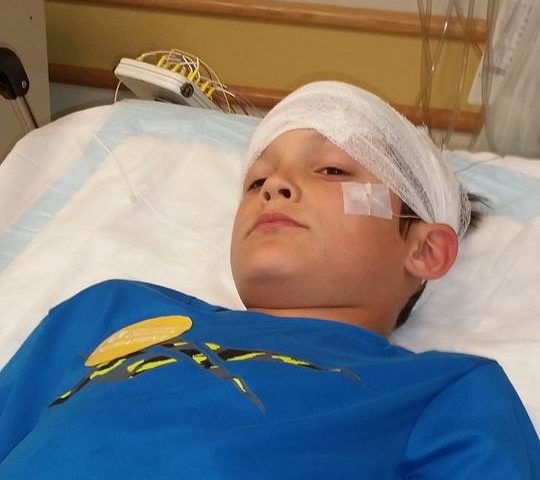 Adriane Polyniak’s son, Colten, who suffered from seizures when he was younger.

CBD is commonly put into oils and lotions, but some novelty products like CBD in water and vaping CBD have recently been put on the online market.

When Kentucky began growing hemp under a pilot program in 2014, Polyniak’s family tried it. And she said it worked: Colten’s seizures disappeared.

The Polyniaks now want their business to help others with what they say are benefits from CBD.

“I think a lot of people are seeing relief with CBD products, and I think it goes a long way to prove the efficacy of what’s going on and what people are saying,” Polyniak said.

People across the country say CBD is helping them with a wide variety of issues including sleep problems, mental illness, arthritis, skin conditions, Crohn’s disease, and more.

But there is little to no scientific evidence to support these claims. Clinical researchers in the Ohio Valley say there’s still not a lot known about the substance, and some express concern that the CBD business boom is moving faster that the scientific research. 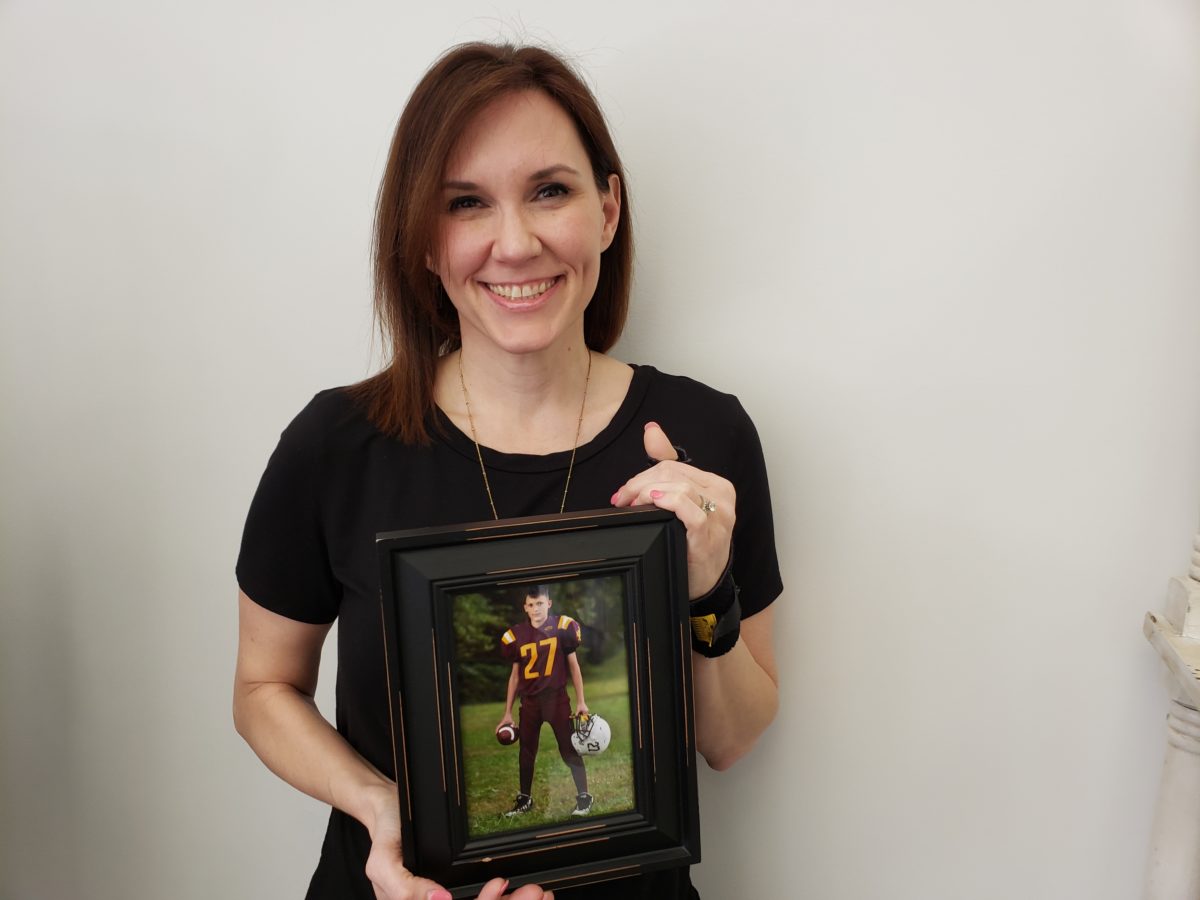 Adriane Polyniak poses with a picture of her now 13-year-old son, Colten.

“I think there’s a lot of concern amongst physicians, medical providers and research scientists like myself, that we’re  moving too fast without proper evidence or information,” said Dr. Anup Patel, Section Chief of Pediatric Neurology at Nationwide Children’s Hospital in Columbus, Ohio.

Dr. Patel has been involved in several studies in the past five years to look at CBD’s effect on various forms of epilepsy. The promising results of those preliminary studies led to a more intensive, groundbreaking study in 2018, where he worked with patients who have a severe form of epilepsy called Lennox–Gastaut Syndrome.

The study results showed patients saw a median reduction in seizures of more than 40 percent. Months later, the Food and Drug Administration approved the first CBD-sourced drug, Epidiolex, because of that study. It remains the only FDA-approved CBD drug.

Yet beyond epilepsy, CBD research is still very new.

“There is potential benefit for certain types of patients with seizures or epilepsy. Beyond that, we have no idea. There aren’t any good studies using CBD in other areas,” Dr. Patel said.

Dr. Patel is referring to the current lack of “double-blind” studies, which are considered the most legitimate among researchers. Double-blind studies are where both the researcher and patients don’t know who is and who is not receiving the drug being studied.

This helps control for the placebo effect, a phenomenon where an individual may experience benefits because of their belief in a treatment, not because the treatment is actually working.

Dr. Alex Straiker, an Indiana University professor whose primary focus is studying cannabinoids’ effects on the brain and eye, is one of many researchers who think the hype and media coverage surrounding CBD could contribute significantly to the placebo effect.

“There’s a lot of enthusiasm on one hand, from the public and manufacturers, to market this. It’s kind of a bonanza mentality,” Dr. Straiker said. “The whole process of science is that you have to have multiple studies, and they have to be well done. A lot of [the claims] you have to take with a grain of salt.” 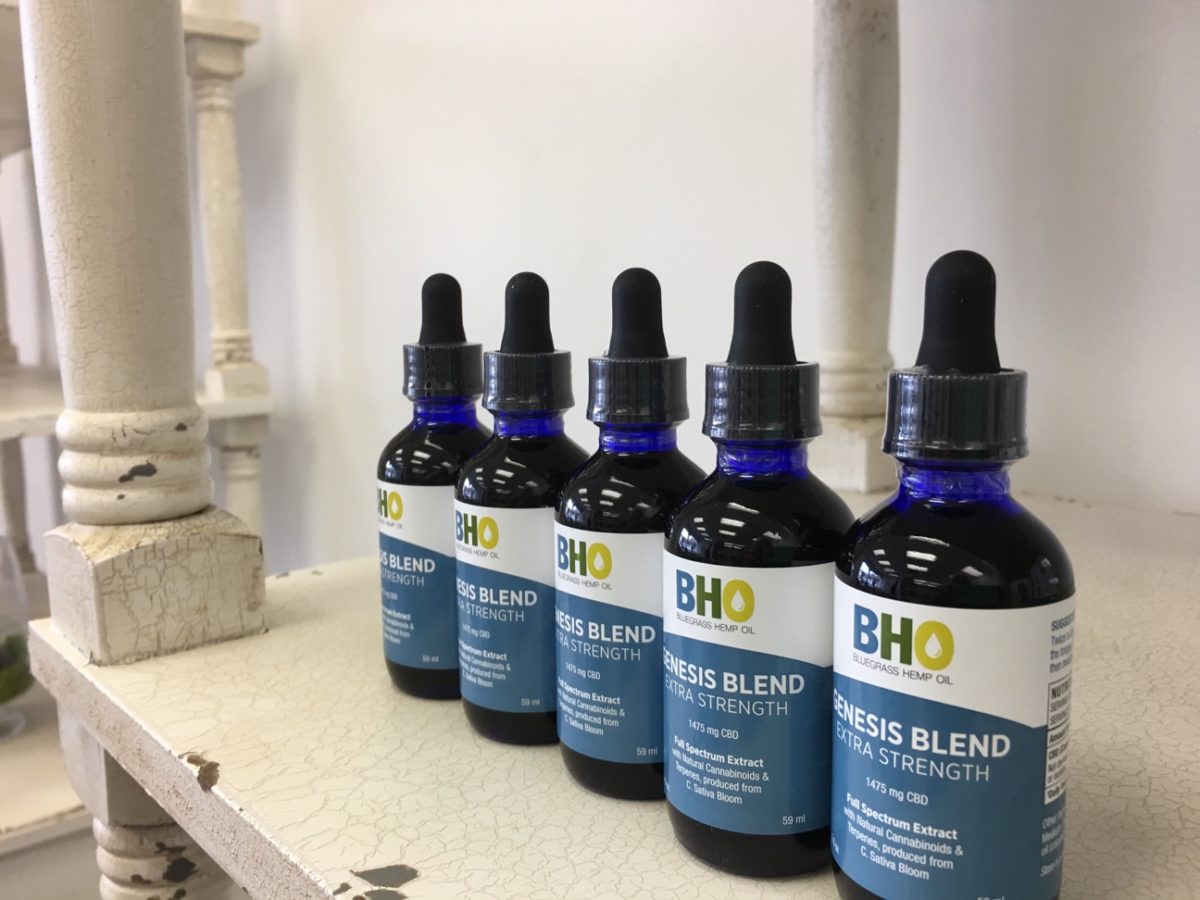 Bottles of CBD Oil on display at Bluegrass Hemp Oil in Lexington, Kentucky.

In the meantime, researchers worldwide are getting busy. Human trials, some of them double-blind, are being conducted to determine CBD’s effects for a variety of issues, from cancer therapies to Parkinson’s disease.

Yet research on CBD’s potential side effects is also surfacing: a recent Indiana University study that Dr. Straiker led indicated that CBD could increase the risk of glaucoma.

“The improvements the patients noted was marked,” Zinn said. “It wasn’t, ‘Oh, I’m having a little less pain.’ It was, ‘I no longer require morphine for my dressing changes.’”

Zinn thinks CBD is relatively safe to ingest in small doses, and he’ll tell patients that if they inquire about it. But he isn’t actively recommending it to patients because there’s still little clinical research.

“To think that it’s going to be a wonder drug for all the things patients are reporting, that benefit in, is probably not going to happen,” Zinn said. “That doesn’t necessarily mean it’s not effective, but it equally does not mean that it is effective.”

Like other CBD companies, Green Remedy doesn’t make any claims about CBD’s effects because they’re not approved by the FDA. But he said the company doesn’t necessarily need clinical studies or the FDA’s approval to be confident the products work.

“The [studies] on what the therapeutic effects are going to be, that takes years,” Hayes said. “America doesn’t need to wait that long to determine that something that has been around for thousands of years that people take for various reasons — we shouldn’t have to wait that long.” 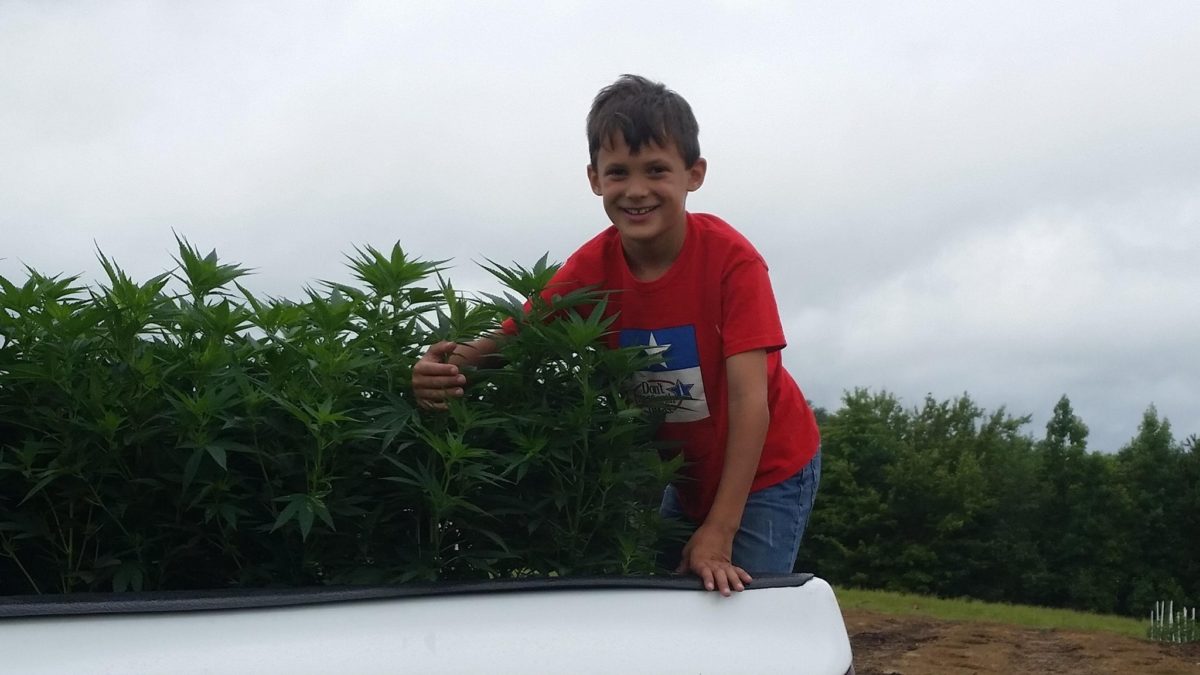 Colten Polyniak with hemp plants, which his family says helped him.

Many in this expanding industry, including Hayes, want the federal government to hurry up with regulation, regardless of studies.

The FDA said in December that CBD in food products is still illegal without FDA approval. Ohio stores selling CBD food have been raided.

Kentucky Agriculture Commissioner Ryan Quarles is one state government official in favor for approval of CBD-infused food because of the boost it could give to regional hemp farmers.

“We don’t want to regulate hemp to death in America now that it’s finally legal,” Quarles said. “Because a lot of folks are making investments right now, we’re hoping CBD can be marketed as a healthcare supplement.” 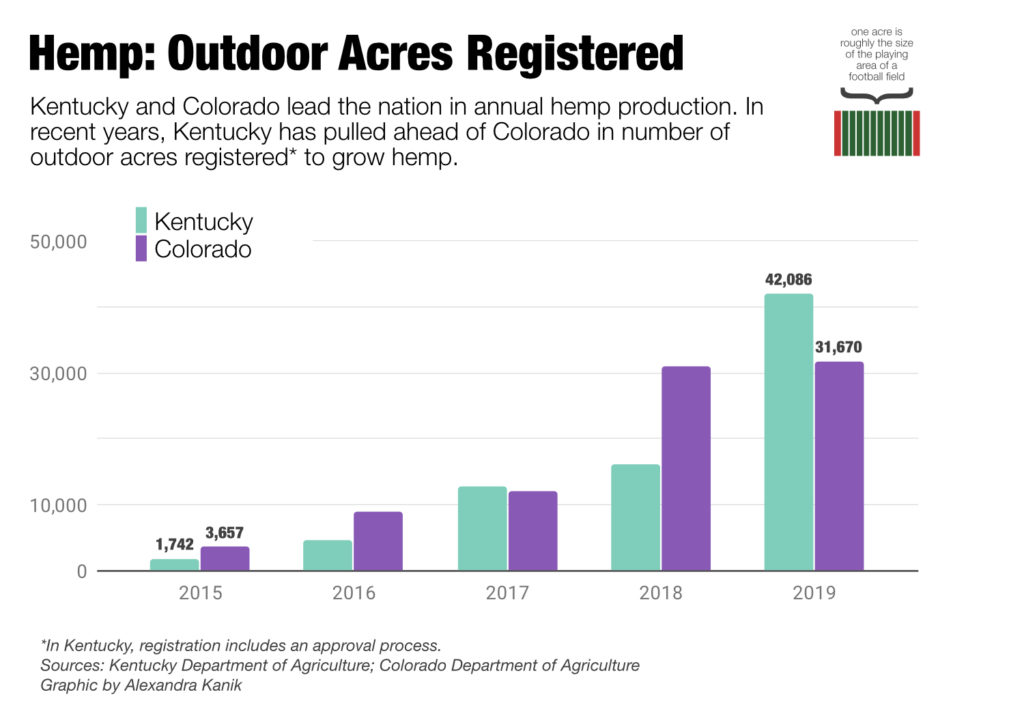 Yet some in the industry are more hesitant. Matthew Smith is a licensed massage therapist in Parkersburg, West Virginia, who uses CBD oil to ease muscle pain and arthritis in his clients.

“Anecdotally, there’s a lot of people that it’s helped,” Smith said. “It is possible that we’ll find that it’s overblown, or that there are a lot of cofactors that go into making it more useful, or making it more safe. There’s still a lot of science to be done.”

The first FDA public hearing on CBD-infused food is scheduled for late May.