A federal agency confirmed Wednesday plans to withdraw its commitment to build a new prison in eastern Kentucky.

“Given new information received, additional analysis should be undertaken to determine if there are significant new circumstances or information relevant to environmental concerns on the proposed action,” the BOP said in the email to the Ohio Valley ReSource.

The Bureau said President Trump’s 2020 budget, which proposed cutting funds for the project, led it to reconsider the development. That budget proposal listed four concerns: trends in the federal prison population reducing the need for a new prison, the cost-effectiveness of construction, the prison’s economic impact, and unspecified project complications.

The proposed prison has received intense backlash from local activists, who cite research showing many rural communities experience little or no economic growth as a result of new prisons.

“It’s not only a great victory for everybody that’s inside these places, their families, people that have worked against this both here and our allies out of state, but also just a good symbolic victory, too,” said Tom Sexton, a local activist who has opposed the prison. 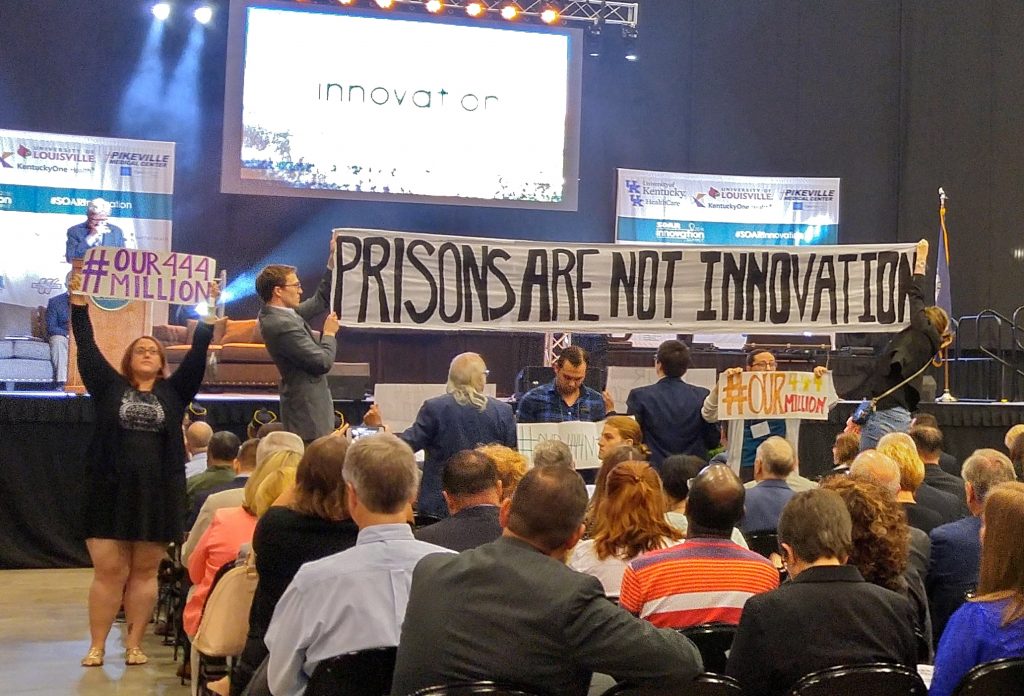 Activists protested the prison project at a 2016 event.

A group of federal inmates sued the bureau last year, claiming that the prison site, a former surface coal mine, is polluted, and that the facility would further disrupt a fragile ecosystem.

“We hope the BOP’s action ends this prison project permanently, and that it also signifies a turning point nationally, away from investing money in prison construction, and toward increased investment in communities devastated by mass incarceration,” said Dustin McDaniel, Executive Director of the Abolitionist Law Center.

The lawsuit is still pending.

Congressman Hal Rogers, whose district includes Letcher County and who sits on the powerful House appropriations committee, has long championed the project and has promised to preserve the roughly $510 million that has been allocated for the site.

Rogers has long argued without evidence that prisons would bring jobs to a district that has been hit hard by the decline in the coal industry. The congressman said in a statement that he shares the frustrations of those in Letcher County who supported the project, and remains committed to its completion.

“BOP leadership has assured me that the Bureau will continue to defend the ongoing litigation and that internal processes related to the Letcher prison construction project continue to move forward,” Rogers said in the statement.

The Letcher County Water District had been slated to receive $4.5 million from the Abandoned Mine Lands Pilot program to deliver water and sewer service to the prison site. Water district manager Mark Lewis said he was “devastated” by the decision, and said his team may no longer be able to bring water to nearby homes that would have been serviced by the new line.

Kentucky Energy and Environment Cabinet spokesperson John Mura said there was one previous instance with the AML Pilot program in which money that had been allocated to one project was directed to another when the first project became unfeasible. “It was very quick,” Mura said.

According to federal regulations, the BOP may reissue its Record of Decision upon the completion of its new analysis.