“They Are Invisible.” Rural Homelessness, Made Worse By Opioid Crisis, Presents Special Challenges

Charles “Country” Bowers takes long, quick strides down a worn dirt path and is soon in front of a thicket of bushes made deep and tall by spring rains.

He’s leading me on a tour of camps made by homeless people in wooded corners of Fayette County, Kentucky. He stops and lifts a hand to signal that he’s spied something.

Framed by leaves, slightly up the hill, there’s a patch of blue. A tent. He keeps his voice low to avoid startling those inside.

“That’s what you are looking for right there,” he said. “It ain’t as thick as I would like, but you still can’t see it.” 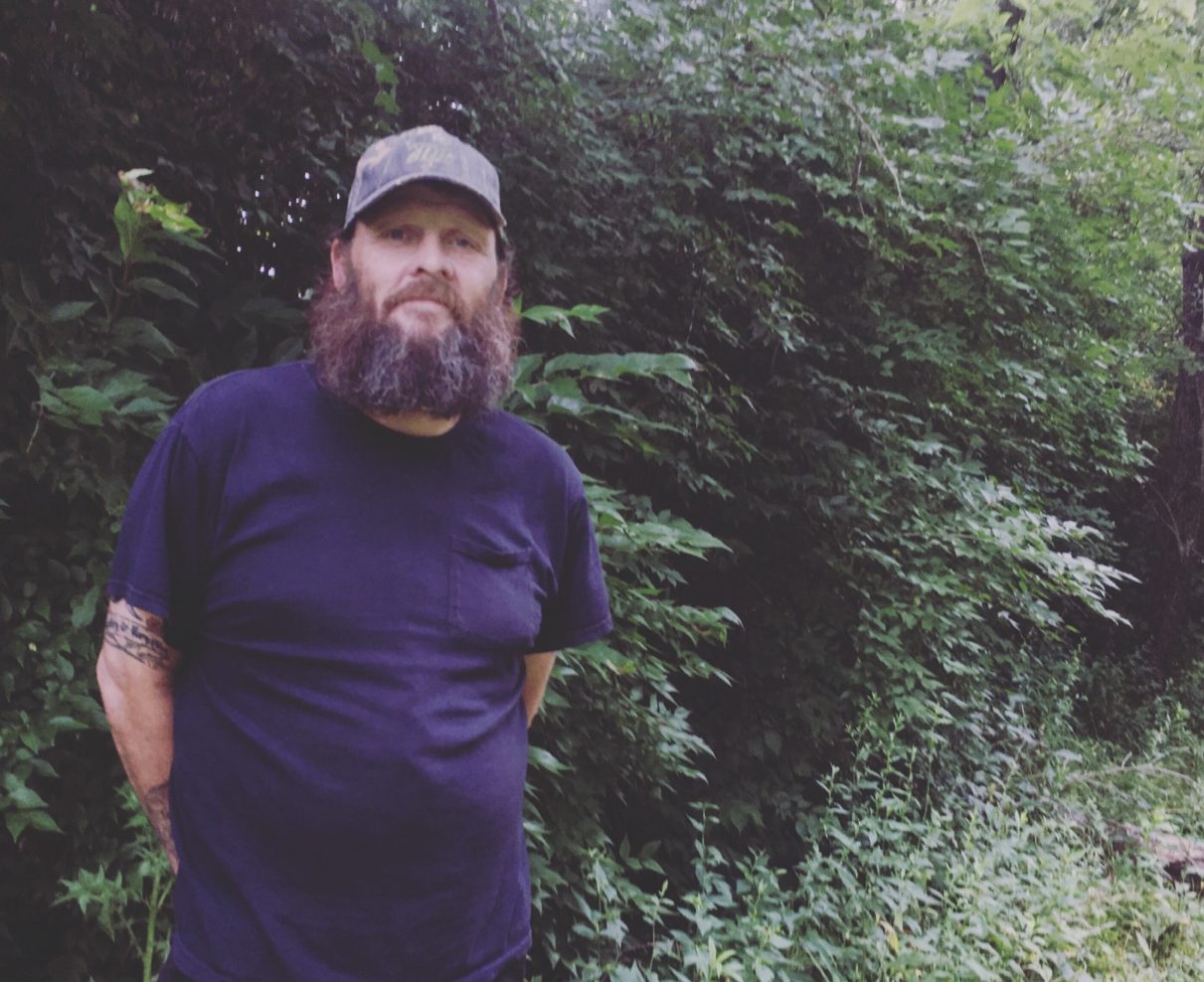 Charles “Country” Bowers revisits the wooded patches where he once lived.

Bowers is tall with a wild beard flecked with gray. His nickname is fitting for someone who figures he’s spent at least half of his 51 years living outside.

He scrambles sure-footed over some rocks to another tent, this one more out in the open.

“Let’s go on down here, my brother might be out here. He’s been out here a lot of years too.”

Bowers calls a lot of people brother. They are mostly men who have been living, as he says, “in the bush” with him for years.

Homelessness is often considered an urban problem. But those who work on homeless issues in the Ohio Valley say rural homelessness is a growing problem, too. The Robert Wood Johnson Foundation, NPR, and the Harvard T.H. Chan School of Public Health reported in May that one in three rural Americans say homelessness is a problem in their communities.

As the Ohio Valley’s profound addiction epidemic stresses the social safety net, advocates say more rural people are at risk of becoming homeless. But the scattered and hidden nature of homelessness in rural places makes it an especially hard problem to measure and address.

According to the National Health Care for the Homeless Council, research shows people without any shelter have, on average, drastically shorter lifespans compared to other Americans, as much as 30 years shorter. And a 2018 homelessness assessment report from the Department of Housing and Urban Development found a greater proportion of rural homeless are unsheltered as compared to suburban and urban homeless populations. 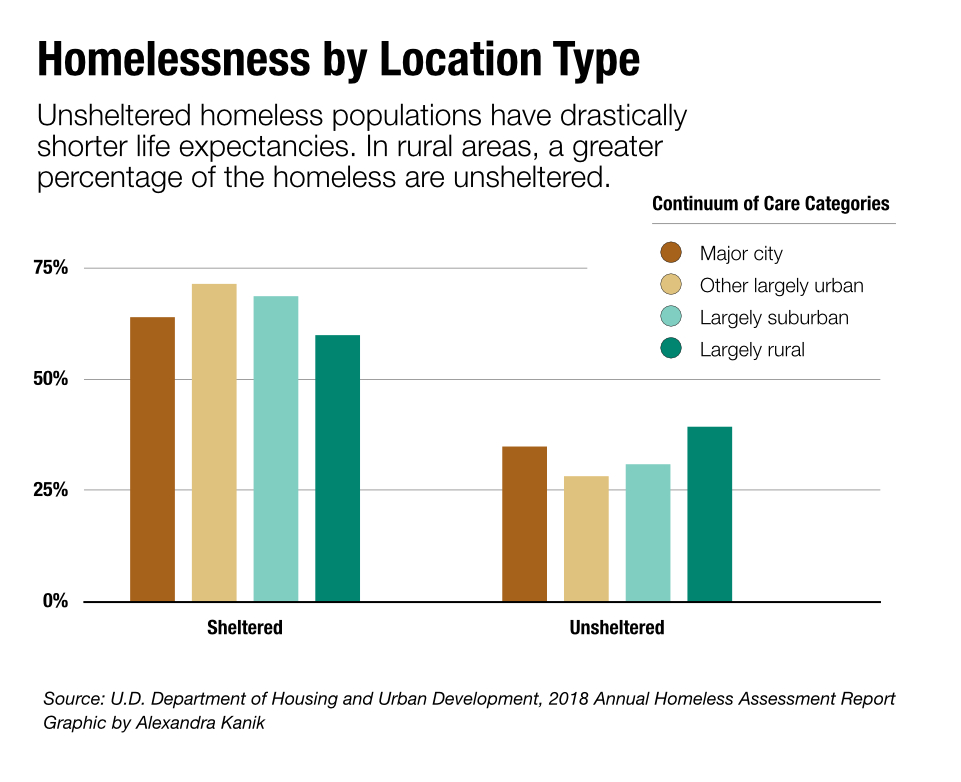 Polly Ruddick runs the office of Homelessness Prevention and Intervention in Lexington, Kentucky, and worked for years on homeless advocacy in rural eastern Kentucky.

She said that many homeless camps in the region she serves are in overgrown, thickly wooded areas and hard to find. Many of those camps also pose a health threat.

Some people have tents, but many build a camp from what they can scavenge, like cardboard, or plastic bags, Ruddick said.

Access to clean water is rare. Human waste is, at best, kept in buckets.

“We clean up a lot of buckets with either human solid waste, or human liquid waste,” she said.

Conditions like those contribute to disease, such as the Hepatitis A outbreak which has claimed 58 lives in Kentucky so far and sickened approximately 5,000 people, many of them homeless.

Ruddick sees problems across the state but she said that many elected officials in rural areas are not aware there are homeless people in their communities.

“I had mayors and I had judge executives say right to my face, ‘My community does not have homeless people.’ And my response was, ‘Yes you do. You just either choose to ignore it or you really don’t see it.’”

Support for the homeless in small communities is sometimes provided by churches, she said. But they often lack the money and manpower to create a solution equal to the problem. Ruddick said even counting the rural homeless is challenging, especially if there isn’t a community shelter or established outreach system.

“They are invisible,” she said. 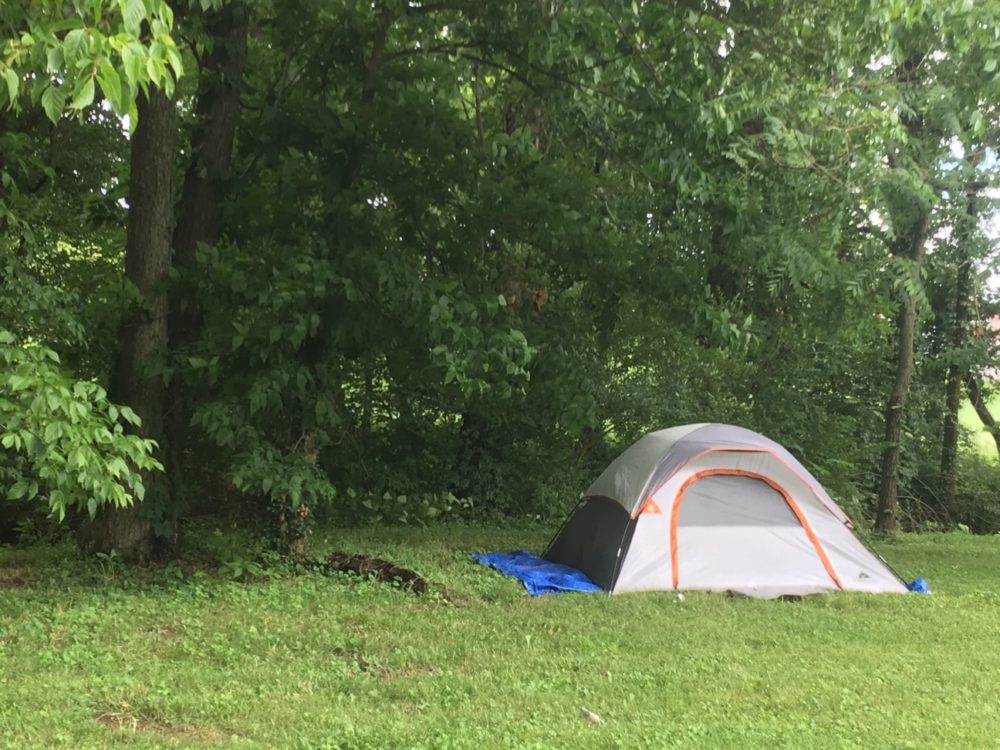 A tent used by a homeless person on the outskirts of Lexington, KY.

“Country” Bowers said he’s met all kinds of people living in camps, and they have all kinds of reasons for being there.

“A lot of people in the world don’t realize it, but they are one paycheck away from being out here with us,” he said. 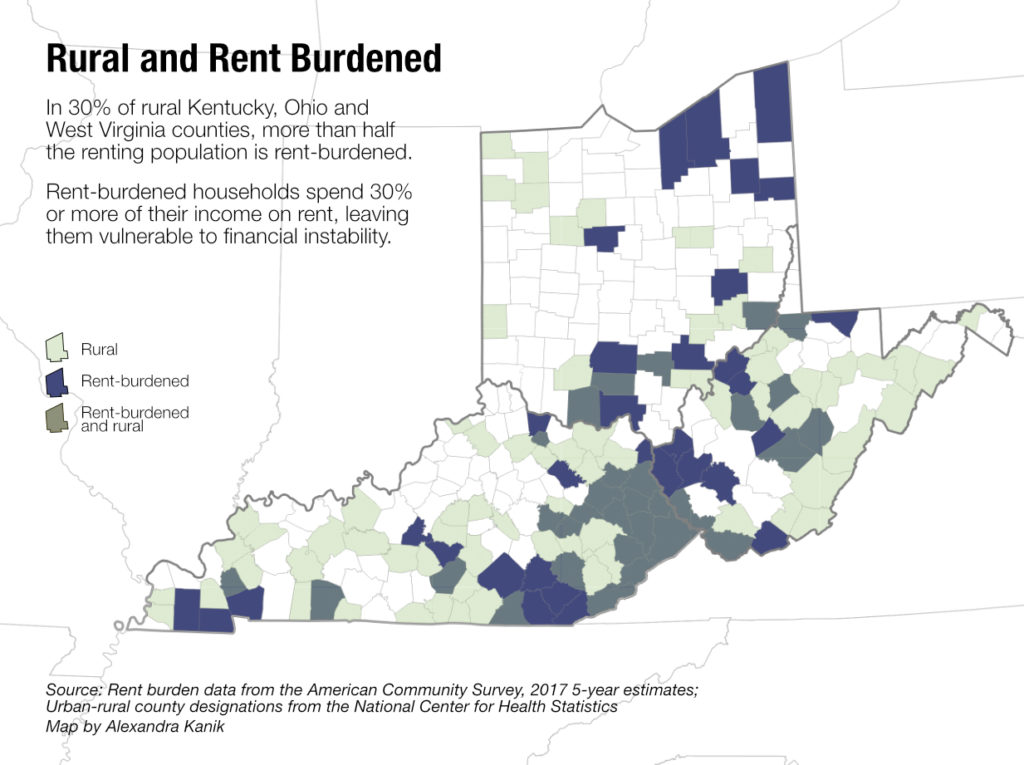 Jimmy Scott is volunteer coordinator and a board member for the Saving Grace Homeless Shelter in Letcher County, in the rural, southeast corner of Kentucky. He agrees with Bowers. People he encounters in his work might have couch-surfed at first, staying someplace night-to-night with friends or relatives.

But, he said, problems tend to mount. They lose their car. Without available public transportation like a bus, they lose their job.

“When their options are run out, some of them even end up in tents, outside,” Scott said.

When the weather gets bad, things get worse. That is something Bowers knows all too well.

“It’s real, there ain’t no doubt about that. My wife, she passed last year. Technically she froze to death. That’s what they said, it was hypothermia. We had gone to bed about 4 o’clock in the morning, got up about 9:30. I took the blanket off of her and she was froze,” he said, his voice going soft. “It was rough.”

Her name was Cindy Harrison. They had been together for 13 years.

Even after that tragedy, Bowers wasn’t ready to come out of the woods.

“I really don’t like walls too much,” he said. “I never have.” He was also struggling with alcoholism.

“I try to quit drinking out here,” he said. “I’ll tell you what, those seizures, I’ve had four or five in a day sometimes. They ain’t no fun.” 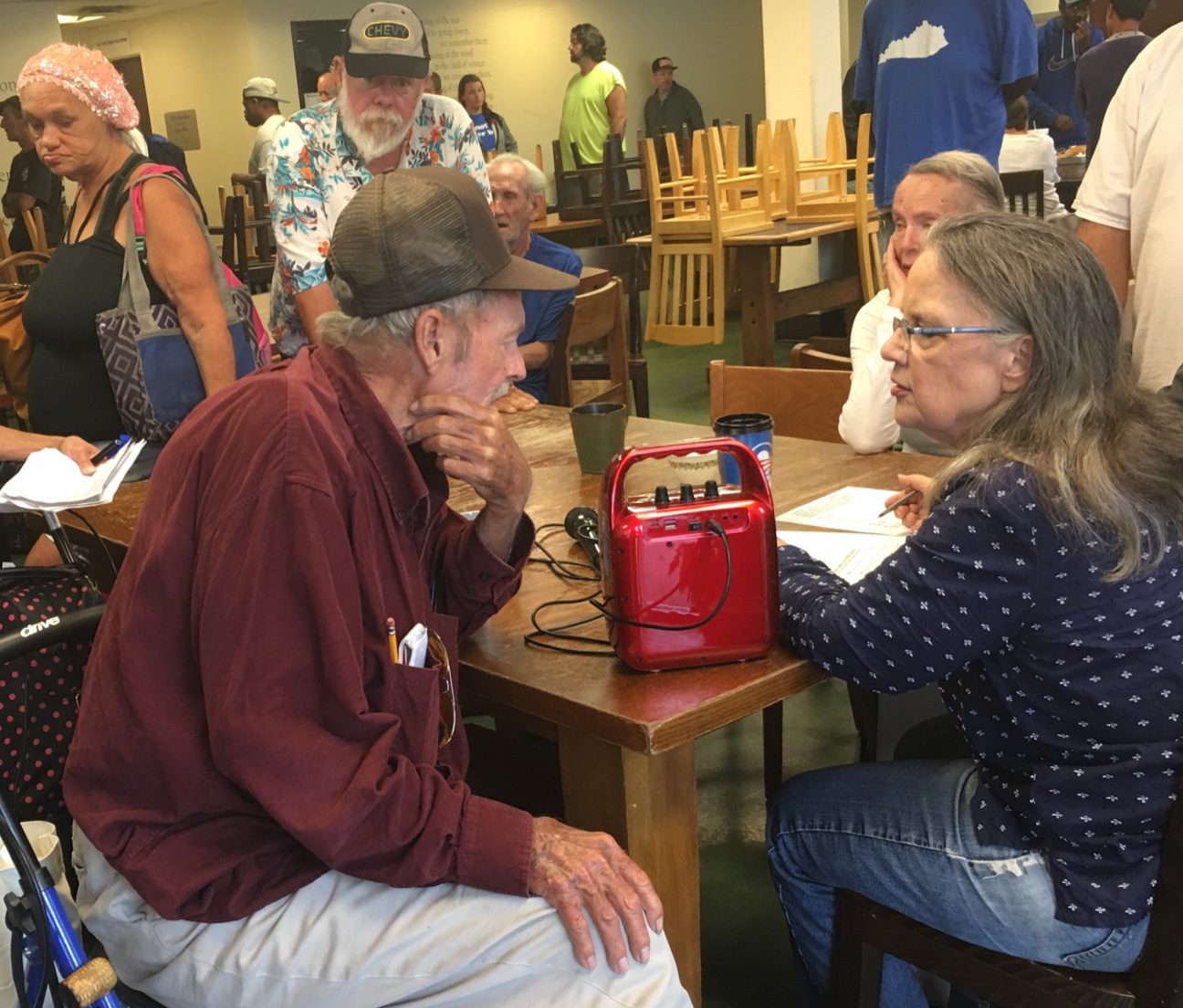 Ginny Ramsey runs the Catholic Action Center, a Lexington shelter that can hold 400 people. She said plenty of folks, like Bowers, just can’t make themselves come in because of anxiety, PTSD, addiction, or behavior fueled by mental illness that makes it difficult to be around people, what she calls “general orneriness.”

Ramsey said the ongoing addiction crisis makes the problem worse. People from rural communities have long drifted into nearby cities like Lexington, she said. A decade ago, if she had someone come to her shelter from a rural place she’d often be able to find somebody back home who would take them in.

That’s not the case anymore.

“The safety nets that have been in place, they are leaking, they have always been leaking,” she said. “Now, they are getting shredded.”

At Lexington’s Hope Center, another homeless service, development director Carrie Thayer said the increase in opioids has had a dramatic effect.

“Someone can drink and be a functional alcoholic for a long time,” she said. “But the heroin and the fentanyl and all these, they’re so powerful. And so when you get a young person who, you know, starts using, and it can take them down really quickly.”

Thayer said Lexington has a greater number of affordable housing units available than many more rural places. But, she said, much of it is of low quality and in unsafe neighborhoods where the use of drugs and alcohol is prevalent. 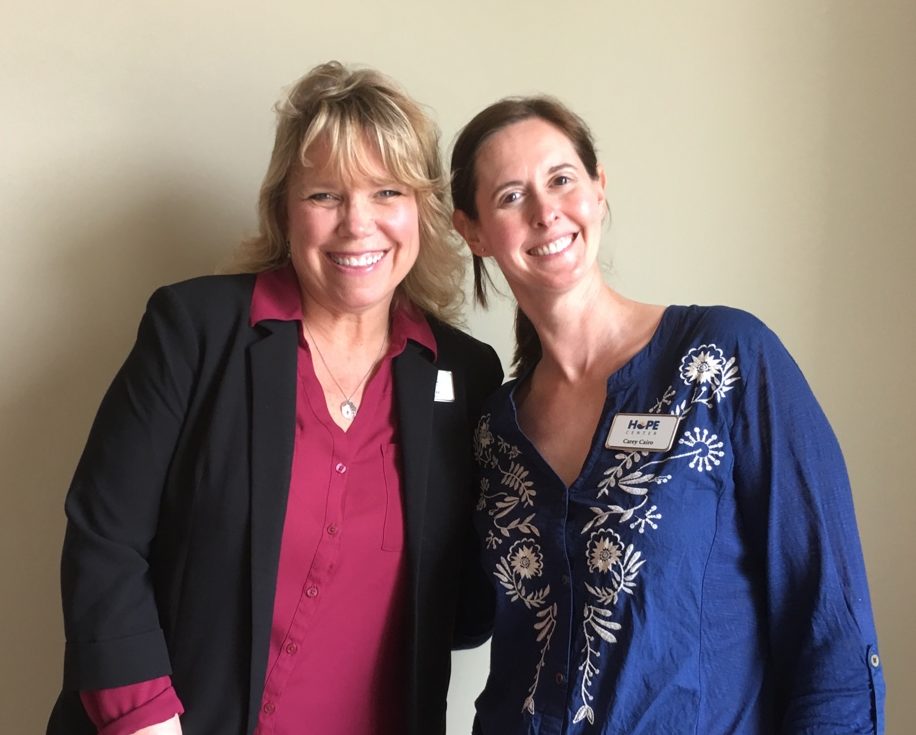 Carrie Thayer, left, and Carey Cairo of the Hope Center.

On top of that, a lot of people in recovery have criminal records that may keep landlords from renting to them.

To help combat that, later this summer, the Hope Center is scheduled to open 48 new apartments all designed for sober living.

The studio apartments come furnished with the basics: a bed, a couch and table, appliances and internet service. At least 60 people have applied to live there already.

Thayer said it has all been made possible by a combination of private donations and local, state, and federal government funding.

“When everybody comes together, really amazing things can happen,” she said. 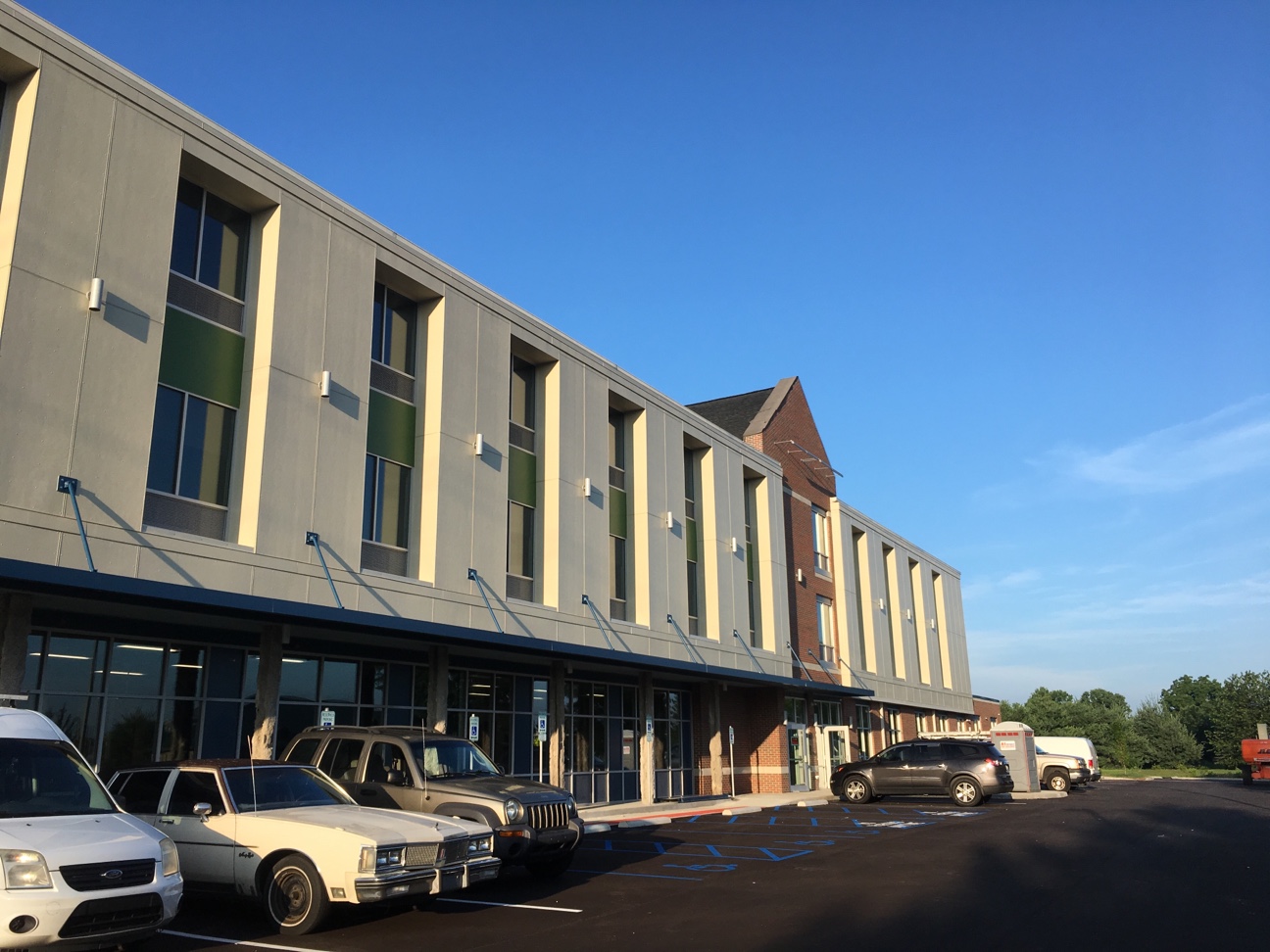 The Hope Center in Lexington is building this 48-apartment sober community near the emergency shelter and recovery treatment center.

“Country” Bowers has lived in an apartment for a while now.

It wasn’t until a second friend died, someone he calls “my brother Ray.” Bowers said the man suffered a heart attack just after they’d gotten up early one morning and had a drink to stave off the shakes.

Ray Shackleford was his name.

“I put down the bottle when Ray died,” Bowers said. 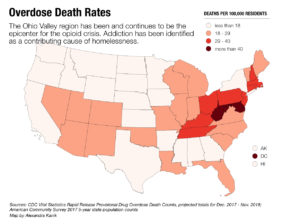 It was a little more complicated than that. He went through days of medically supervised detox because he is prone to seizures.

He stayed sober for two weeks, living in the shelter at Lexington’s Catholic Action Center. He spent his days sitting outside the office doors of director Ginny Ramsey.

Eventually, she offered him a job and an apartment.

His new home is in a white wooden house in a poor part of town. He said doesn’t want to show the inside because it needs a good cleaning. His bed was so saggy in the middle he had to put an old door underneath it so it would at least be flat.

He has found a purpose in his loss by sharing his story and advocating for the homeless community. He has appeared at Lexington city council meetings to urge the approval of a mandatory 21-day notice before city workers tear down a homeless camp on public land.

As we end our tour, Bowers said he still misses the community he lived with for much of his life.

“When I was out here with them we could all stay together.”