Patrick Fitchpatrick has worked at Blackjewel’s D-11 coal mine in Cumberland, Kentucky, for more than a year. He said he enjoyed the work right up until he was told not to come in last Monday.

“Everything was smooth sailing and then one day it just all goes to hell,” he said.

The country’s sixth-largest coal company filed bankruptcy last week, and Fitchpatrick was among many of Blackjewel’s 1,100 workers across Kentucky, Virginia, and West Virginia who were suddenly out of work.

Then Fitchpatrick got more bad news, this time from the bank: His paycheck bounced. Fitchpatrick said he has yet to receive some $4,200 in owed wages. The father of two just bought a house and truck. Now he’s struggling to pay his bills.

“I’m having to sell my tools, my guns, everything that I’ve worked hard for just to make ends meet,” he said.

More than a hundred coal miners and their family members in similar situations gathered Wednesday in Whitesburg, Kentucky, in an attempt to get some answers and some of their pay from the failed mining company. Miners from across the region are largely still waiting for back wages as well as answers about the company’s future. 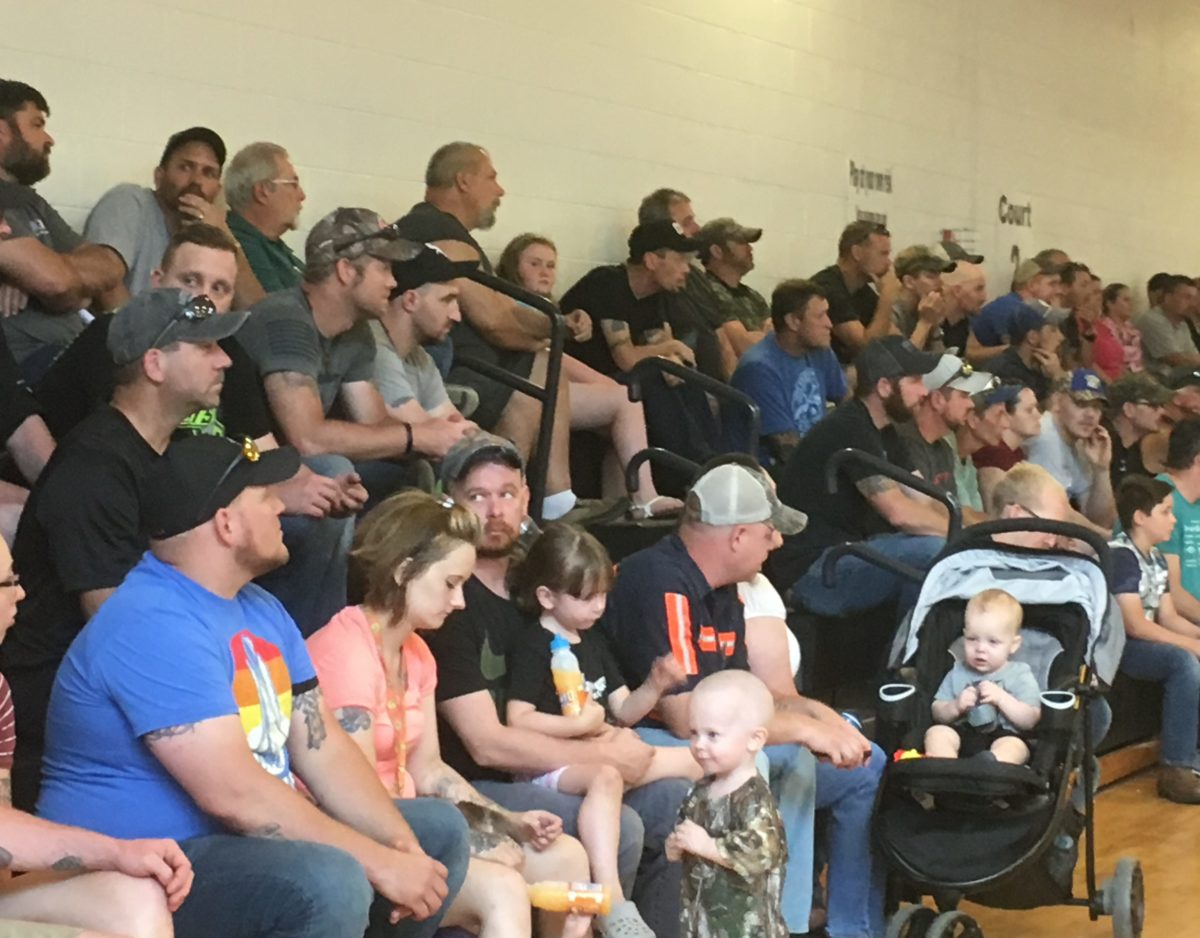 Blackjewel miners and family members gathered in Whitesburg, KY, to learn more about the bankruptcy.

The coal industry is no stranger to bankruptcy. Over the last decade a wave of bankruptcies roiled the sector as major players including Alpha Resources, Peabody Energy, and Arch Coal sought to restructure under Chapter 11 protection.

But since its surprise filing on July 1, Blackjewel’s bankruptcy has been anything but routine.

“Obviously I don’t think last week went the way anyone was hoping or expecting,” attorney Travis McRoberts explained in a bankruptcy court hearing Saturday. McRoberts is with the firm Squire Patton & Boggs which is representing Blackjewell LLC.

“It has visited as we all know a significant hardship on these employees and their families,” Volk said.

Last week, Volk approved a $5 million loan to Blackjewel to help keep it afloat on the condition the company’s CEO – Milton, West Virginia, resident and multi-millionaire Jeff Hoops – would resign.

But McRoberts told Volk the company needs more money, a lot more. It owes tens of millions in unpaid local, state and federal taxes, mineral royalties, bills to vendors, and fines for environmental and mine safety violations.

The amount of debt leaves some industry observers aghast.

“When you look at the list of debt, it’s just like, holy cow. You know, how do you get this far in debt?” Clark Williams-Derry said. He directs energy finance at the Sightline Institute, a Seattle-based think tank that works on environmental and economic sustainability issues. He said Blackjewel’s bankruptcy has been unusually chaotic.

“How do you get this far behind on your payments with $100,000 in the bank and not think you’re getting close to bankruptcy?” he asked.

At the Saturday hearing, Blackjewel’s lawyers told the court that without another infusion of cash, it can’t pay its Appalachian employees. Currently, the company is only paying workers in the region once they are called back to work. And so far, few have gotten that call.

At the Wednesday information session in Whitesburg Blackjewel employees and their families packed the Letcher County Recreation Center.

Miner Stacy Trotter, 43, who worked at a mine in Harlan County, said he found out about the layoffs when he checked Facebook after coming home from a 17-hour shift.

“I’m about to lose everything,” he said. “I got a sick kid and no insurance … no money to feed him.”

Trotter said his paycheck had been taken out of his account after he had already spent some of it, leaving him with an overdraft of $3,200 in his bank account. Trotter said he doesn’t know when he might be called back to work.

County officials and attorneys urged employees to keep paperwork documenting their hardships from the sudden layoffs and lost pay.

“You have rights under state and federal law to receive the wages that you earned,” attorney Sam Petsonk with the public interest law firm Mountain State Justice told the crowd. Petsonk said that in addition to the missing pay, he’s concerned about the company’s required payments to employee retirement plans and health savings accounts.

On Tuesday, lawyers representing a Wyoming employee of Blackjewell filed a class action lawsuit alleging the company failed to provide adequate notice of the layoffs under the Worker Adjustment and Retraining Notification Act of 1988, more commonly known as the WARN Act.

“This is actually the type of case that Congress really intended the WARN Act to protect against,” said Stuart Miller, an attorney with Lankenau & Miller, LLP, who is leading the case.

“Had the employer given the 60 days notice, as the acronym indicates, it gives the employees the opportunity to seek new employment, to seek new training over a 60-day period, which would certainly mitigate the devastation that is caused by a sudden closure of a facility like this.”

Kentucky Attorney General Andy Beshear has opened an investigation into the Blackjewel bankruptcy and assigned a mediator to help employees deal with debts that resulted from bounced paychecks. Governor Matt Bevin announced that the state Labor Cabinet is also looking into the matter. 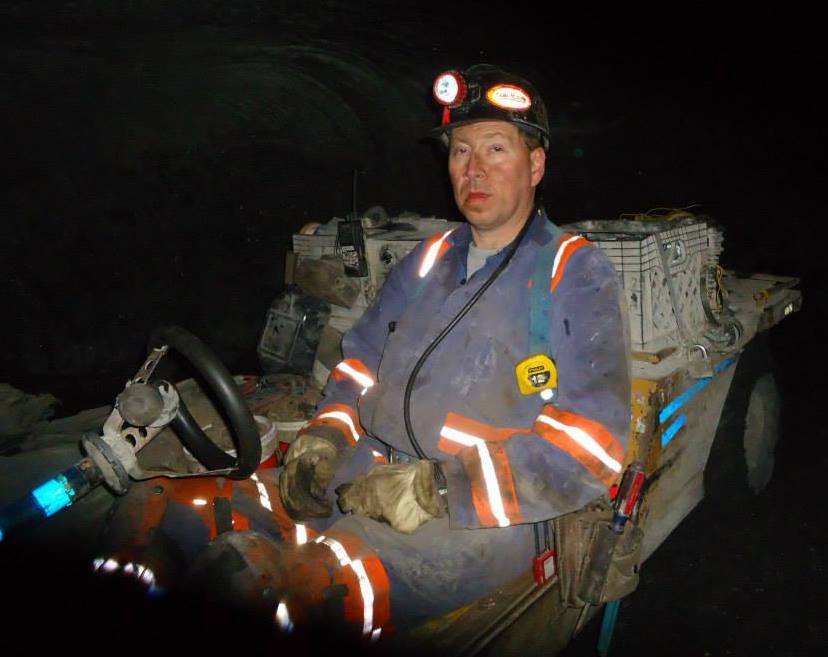 Bobby Balthis was among the miners at the Whitesburg event Wednesday. He worked at Blackjewel’s Clover Lick 3 mine in Harlan County. He said he was able to cash his last paycheck but then it was “clawed back,” or made void after deposit.

“They actually took the check that I had cashed out of my savings and then charged me $12 for the company’s check that had bounced,” Balthis said.

He said he knows many who are hurting who were living from paycheck to paycheck. As a veteran of the mining business, he had put some money aside in case of a layoff.

“I’ve been doing this for 27 years and you can’t never trust the coal industry, because you don’t know one day to the next,” he said.

Blackjewel’s next bankruptcy court hearing is scheduled for Friday. The court is set to consider a series of procedural motions filed by the company. Additional financing is not currently on the agenda.