In a conference hall in Pikeville, Kentucky, this September, Gov. Matt Bevin led an eager audience in a countdown. When the audience reached “One!,” a map on the screen behind the governor lit up with the promise of a high-tech future.

After years of delay and scandal, major portions of the commonwealth’s “middle mile” of high-speed internet were complete.

“There are so many negative haters, so many people who pooh-pooh things and say this can’t happen, it’s not possible,” Bevin told the crowd. “But I’ll tell you what. We’ve never quit.” 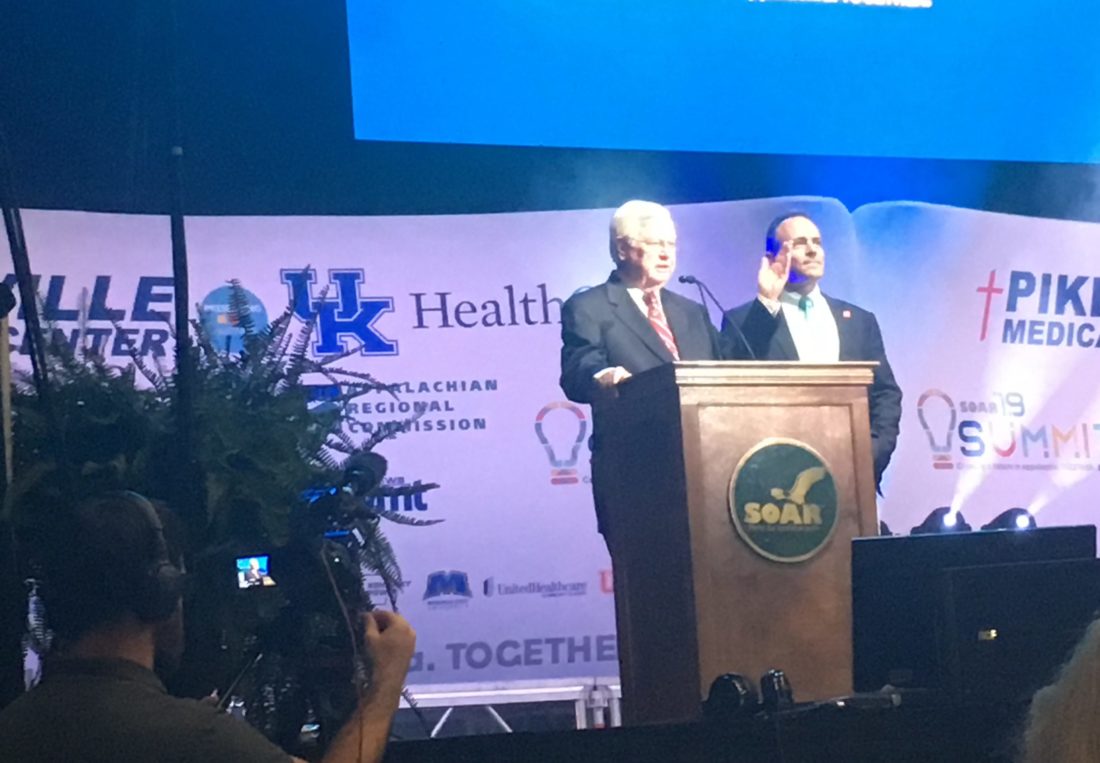 The event was the annual summit of a group called Shaping Our Appalachian Region, or SOAR, founded in 2013 to help guide the flagging counties of Appalachian Kentucky into a new, post-coal economy.

SOAR began in the winter of 2013, when 1,700 east Kentucky business leaders, elected officials, agency heads and concerned citizens gathered in that same Pikeville conference center to hatch a bold new agenda. With 27 percent of east Kentucky coal mining jobs lost in just one year and no turnaround on the horizon, the only option was to chart a new path towards a more diverse central Appalachian economy.

Community leaders fanned out across the 54 counties comprising Appalachian Kentucky. They held listening sessions with thousands of Kentuckians and turned in recommendations that included items like involving incarcerated people in community gardens, supporting local artists, and identifying hotspots of air and water pollution resulting from coal mining.

The Rural Policy Research Institute said of the inaugural summit, “Everyone there knew the region was ready to respond to the urgency of the moment with a renewed commitment to working in greater unison, toward a preferred future.”

But when SOAR’s leaders turned the working groups’ recommendations into a blueprint for the organization, working group members found them somewhat changed. The organization would start by championing KentuckyWired, the commonwealth’s fiber-optic internet system, and then, with that critical 21st-century infrastructure in place, it would go full throttle on improving health outcomes, developing a tech-savvy workforce, and germinating growth in the region’s industrial and small-business ecosystem.  As Congressman Rogers put it in 2019, the focus was “Jobs, jobs, jobs.” 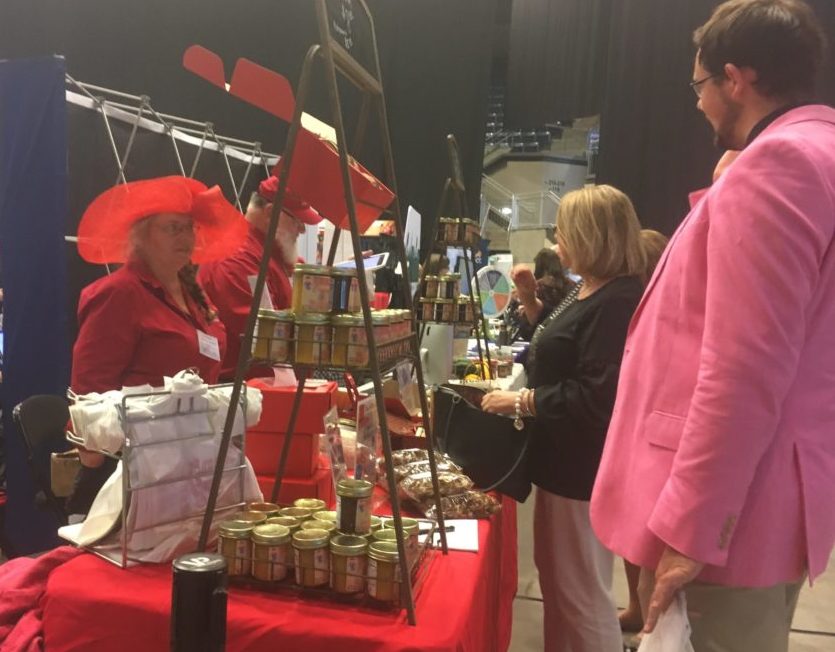 But KentuckyWired quickly became mired as costs ballooned and its timeline extended. As most of the eastern Kentucky lagged behind the rest of the country in access to internet, communities continued to struggle to retain residents and build a sustainable economy.

“[SOAR] started as a really great idea, where they were seeking a lot of input from a lot of different people,” said Ivy Brashear, Appalachian Transition Coordinator for MACED, an economic development organization that was involved in SOAR’s early working groups, but has since stepped back. “Over time it has shifted into their approach being outside investment and industrial recruitment,” she said.

Brashear pointed to a recent solar energy project MACED had financed, which helped four Letcher County groups adopt solar energy. “We believe that shifting the way that energy works is a big deal, and it matters to communities, it matters to them saving money, it matters to what they then are able to do with the money they saved. And what we see in places where we’ve helped people transition to solar is, it can be the difference between them staying open and them closing their doors.”

SOAR officials did not return a request for comment, but its principals told the Lexington Herald-Leader last year that its objectives were long-term, and it had been successful in building connections across eastern Kentucky.

The crowd at SOAR’s sixth conference was a bit thinner – about 800, according to executive director Jared Arnett. The event featured a start-up pitch competition and 92 booths running the gambit from addiction recovery programs to an international drone port. Highly produced videos touted projects conceived of and championed by SOAR, projects like the high-tech greenhouse AppHarvest, and teleworks operation Digital Careers Now. 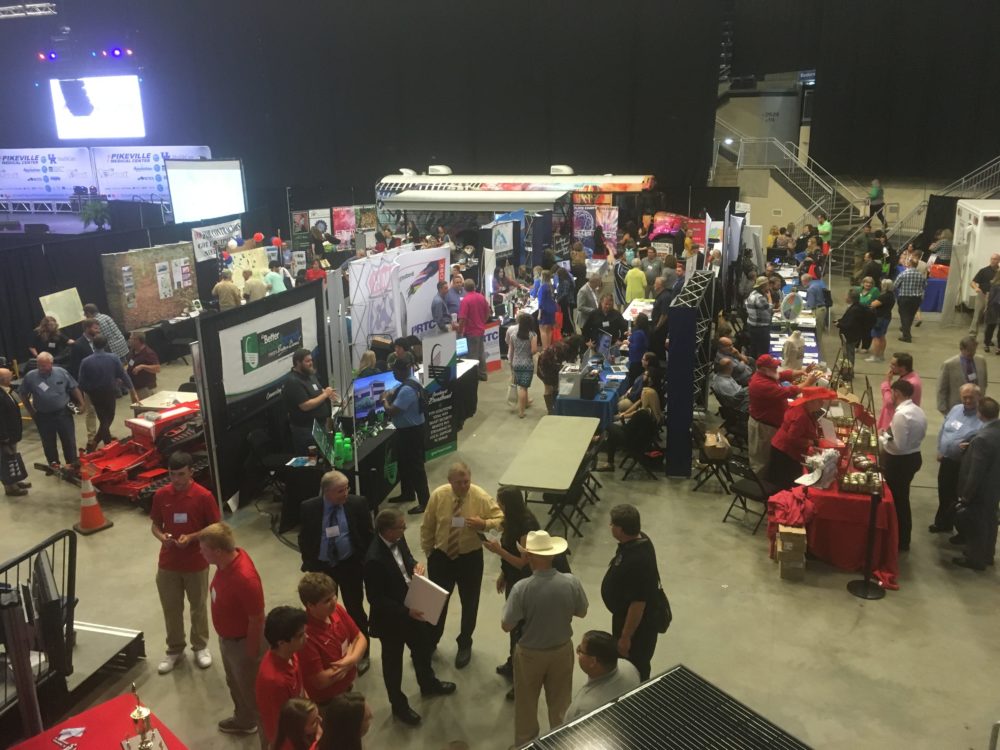 Kentucky entrepreneurs show their products at the 2019 SOAR Summit.

Some working at the ground level see a long way to go to meet SOAR’s goals.

“There’s tremendous opportunity that people can take advantage of with our workforce down here, and they don’t realize that,” said Bill McIntosh, who worked as a coal miner for 40 years before taking a grant-funded position as Perry County’s economic development coordinator. Part of his job is luring new businesses to the 236-acre Coalfield Industrial Park that Perry County shares with four nearby counties. Like other industrial parks in the region, this one was built on reclaimed surface mines in the hopes of attracting new businesses to a region desperate for a new source of employment.

McIntosh lamented that as more mine land across the region has been turned into build-ready land, companies have their pick of locations, and businesses he hopes to bring to the industrial park often find one thing or another to make them decide against it.

Part of McIntosh’s job, he said, is shifting outsiders’ perceptions of who Appalachians are. “A lot of people are still seeing negative stereotypes: poverty-stricken area, uneducated workforce. That’s not true,” he said. “The major population group in our workforce, [people aged] 45-64, these are people that come from a industrial background. They can easily be cross-trained in other sectors of industry.”

Perry County’s Coalfields Industrial Park is currently home to a FedEx distribution facility, a trucking company, and a call center that is known for its frequent layoffs. A potential new development was recently announced for the industrial park, an aluminum company that could employ as many as 265 people once it’s up and running. The community in 2018 received nearly a million dollars to bring natural gas to the industrial park.

The focus on industrial growth hints, too, at an unstable future for the region. A recent Brookings Institution report found that manufacturing sector jobs are among the most vulnerable to automation. With other job losses likely in food service and transportation sectors, it is projected that the Ohio Valley could lose about one quarter of its jobs to automation. Some counties in the SOAR region could lose up to 65 percent of their jobs.

MACED’s Brashear said the region’s transition would require work on multiple fronts, but she worried about focusing too heavily on industrial development. “I think our history shows that that doesn’t necessarily work, it doesn’t necessarily build a sustainable economy that isn’t trying to figure it out every 10 years or so.”

Broadband access is a challenge across the Ohio Valley. The internet provider data service BroadbandNow estimates that 7 percent of Ohioans, 9 percent of Kentuckians, and 22 percent of West Virginians lack the critical 21st-century infrastructure. Those figures mark an improvement from just a few years ago. In 2017, for example nearly 20 percent of Kentucky homes lacked broadband service.

SOAR officials hope that reliable, fast internet will help the region retain its workforce and compete for high-tech industries. In fact, SOAR was a part of early conversations about a statewide broadband network, for which bids were solicited in the summer of 2014. The Kentucky Communications Network Authority, a government agency, would spearhead the construction of 3,000 miles of fiber-optic cable, a “middle mile” that would bring high-speed internet to government offices and other key buildings, and would allow private internet service providers to hook in, for a price, to bring wireless internet to businesses and communities across the region. 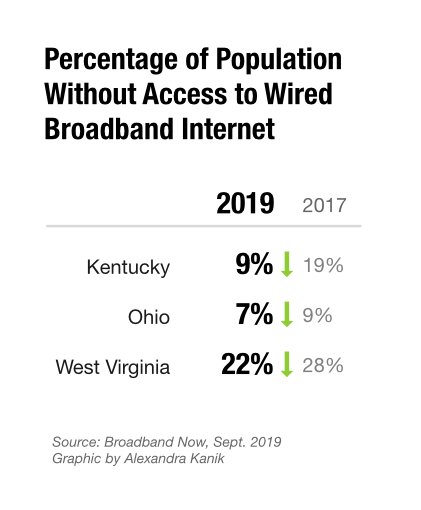 But the “last mile” to connect rural, dispersed homes and businesses, is still a challenge. KCNA interim executive director Deck Decker says residents may have to wait anywhere from six months to several years before broadband is available in their homes and businesses.

“We’re going to try to get in local civic leaders, business leaders, we’re going to get in a room and start discussing this last mile and see who has the best plan,” Decker told a small crowd at the SOAR summit. “I don’t think anybody in this room will tell you they’ve got a magic bullet that’s just going to automatically make the last mile appear in, you know, Harlan County, but we’re going to give it our best,” he said.

Decker said each community would need to find the best way for it to make use of the fiber-optic network, whether it be a private company, a public investment, or a public-private partnership. But the investment will likely be a hurdle for rural counties with far-flung communities.

“I’ve had major providers sit in my office and say, if they can’t get a payback on their investment in 18 months, they can’t do it, because they can’t build a business case for it,” Lonnie Lawson said. Lawson is a KentuckyWired board member and CEO of the Center for Rural Development. He hopes to provide some seed money to help internet service providers justify the investment expense.

Lawson said he hopes the network will allow more Kentuckians to work from home or in high-tech careers, and will help Kentucky students complete digital homework in their own homes.

“It’s about the only solution of trying to keep our best and brightest in the region,” Lawson said. “Otherwise, if we don’t have job opportunities, then our young people are going to leave, and our region is going to suffer year, after year, after year.”