Students line up single file behind teachers at West Elementary in Athens, Ohio, for. the walk downhill from the brick building to board buses or meet up with the person taking them home.

Some talk about their day, others run off to the playground and some discuss the latest Pokémon movie. A chant for the yellow, electric mouse Pikachu breaks out. 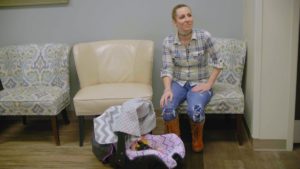 This story is part of the series Born Exposed, exploring access to medical and rehabilitative care in Appalachia for opioid-affected women and their babies. Born Exposed is a project of 100 Days in Appalachia, West Virginia Public Broadcasting and the Ohio Valley ReSource.

It’s a scene familiar to Tom Gibbs, the superintendent of the Athens City School District, who’s making sure these and the nearly 3,000 other students he watches over make it home safely.

This is one thing that hasn’t changed much during Gibbs’ 30 years as an educator. But other things have.

“Where we used to have one child each preschool group [with these issues],” Gibbs said. “We now might have three to six.”

That’s also true for kindergartners, he said, and teachers are puzzled and concerned.

“So what’s difficult for us to ascertain is, what is the cause of that?”

Gibbs and many other educators around Appalachia believe several factors surrounding the addiction crisis may contribute to the increase, including neonatal abstinence syndrome, or NAS, which results from drugs taken by mothers while children were in the womb.

In Kentucky, Ohio and West Virginia, where some of the highest rates of NAS occurred during the opioid epidemic, 14,881 babies were born between 2013 and 2016 that were affected by drugs they were exposed to in the womb. Many of these children now attend preschool through first grade. 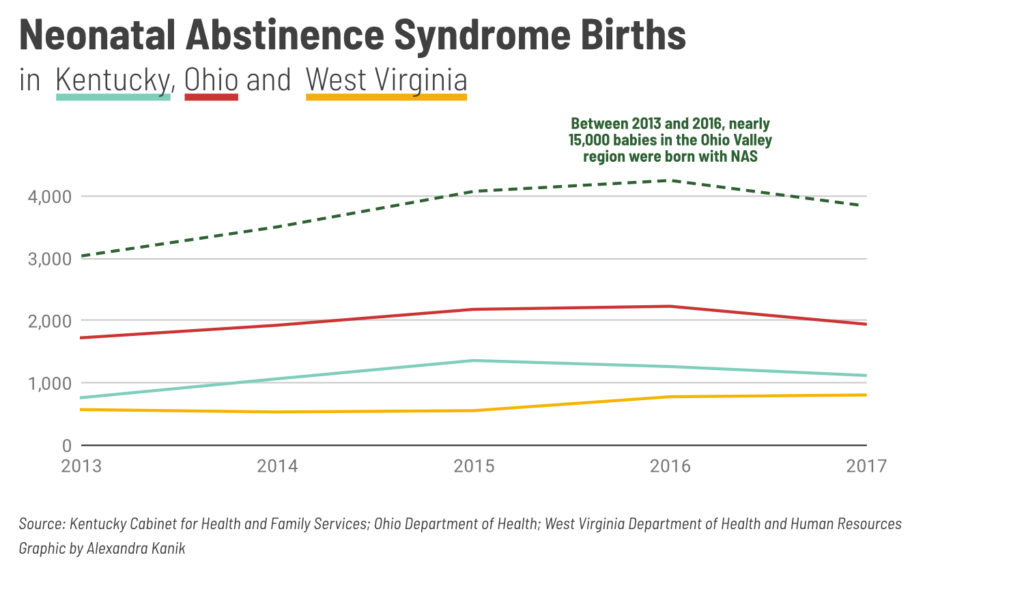 It’s difficult for educators to know exactly what these children are going through. NAS is not one condition, but a collection of physical and cognitive symptoms. And those symptoms don’t manifest exactly the same way for every child.

While Gibbs can’t be sure, based on what educators do know about NAS, he suspects there is a connection to what they’re seeing in the schools.

“Our teachers are put in situations where they have to try to react to symptoms, as opposed to being able to know what the root cause of the challenges are and being able to develop an intervention plan,” he said.

Educators are working to reach these children as early as possible in order to meet their needs. Researchers are working to better understand the long-term effects of NAS to help teachers know what they are going up against. And everyone working with these children hopes to avoid the mistakes of past drug crises where stigma surrounding early exposure was more harmful than the drugs.

Educators have adapted services they offer to help the students with developmental delays.

“We have an increase in the number of preschool classrooms that are available,” he said.

The preschool is now an all-day, four-days-a-week program to provide more instructional time and other resources.

The district has also expanded resources in other grades. 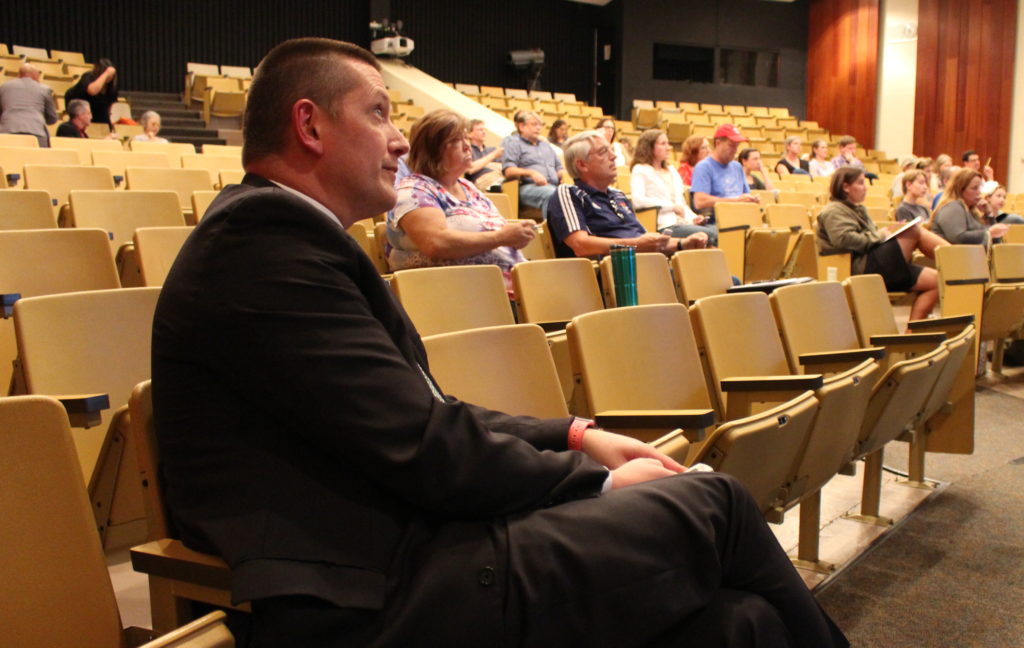 Superintendent Tom Gibbs sits in the crowd at a recent Athens City School District Board of Education meeting.

“We have tried to keep our kindergarten class sizes fairly small…on average, less than 20 students per class,” he said. “Just trying to make sure we have the people available to intervene where necessary.”

In nearby West Virginia, the state consistently had the highest rates of NAS births in the nation during the peak of the opioid epidemic.

Susan Beck, the state Department of Education’s director of the Office of Special Education, works to manage state resources as the demand has increased. She said the state has a  particular type of teacher shortage.

Beck said this is a nationwide trend. 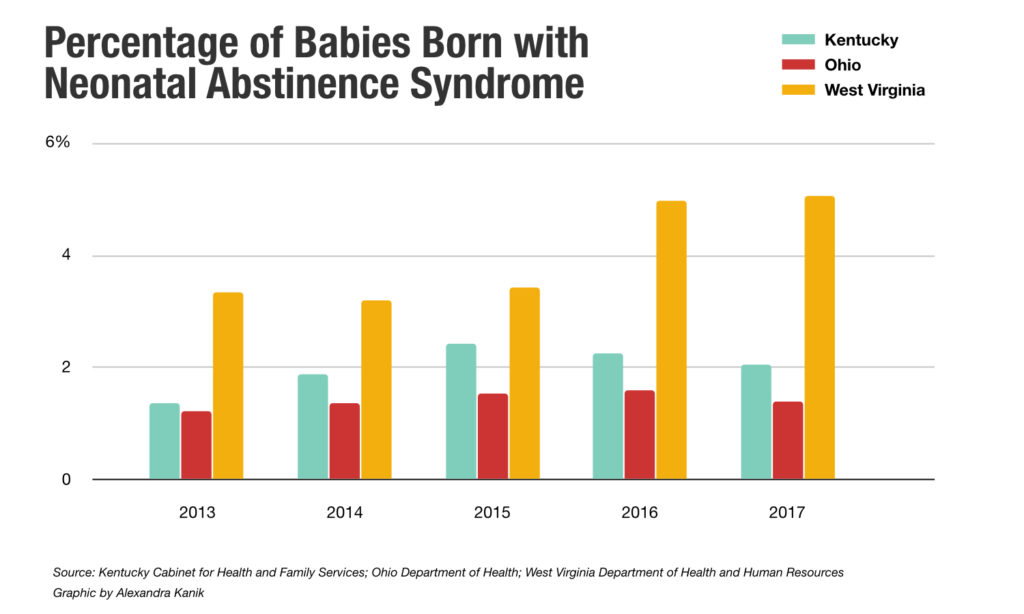 The state is developing strategies to help these children as early as possible through various partnerships with the state Department of Health and Human Resources and other agencies.

Early childhood programs help those with identifiable developmental delays from NAS to catch up to their peers before they enter the school system.

But sometimes these children will need continued support.

Student assistance teams use what they do know about the effects of NAS on a developing brain to create further interventions.

“They identify students as soon as they come through the door, if they need it, as to what interventions or help they need,” Beck said.

Early interventions are key to helping a student with special education needs reach their potential. And personalized special education plans being after these children are evaluated by Student Assistance teams.

Educators are working with limited knowledge about the long-term effects of NAS.

Dr. Henrietta Bada is a professor of Pediatrics at the University of Kentucky and a prominent voice in NAS research.

She said it can be difficult for researchers to tell what is caused by NAS and what is due to other factors like genetics, trauma, or a person’s socioeconomic status.

“The environments that these kids grow up in are not the best environments,” Bada said. “That’s when you try to balance the risk of a poor environment and then what happened to these kids when they were exposed to substances.”

A child’s delay in verbal communication could be caused by trauma experienced at home, for example, or gastrointestinal problems could be the result of a lack of nutritious food, rather than NAS.

Bada is also part of the Ohio River Valley Addiction Research Consortium, a group of 16 colleges and universities working with health professionals, law enforcement, social workers, and advocates across six states. The group is dedicated to continuing collaborative research on the effects of NAS and best methods for treatment.

A small study of Australian children indicates students who experienced NAS performed worse than their classmates through high school due to related learning disabilities.

But more recent work out of Tennessee analyzing state Medicaid and birth certificate data children suggests not every child evaluated for NAS will need services related to a disability later in life.

While research continues, Bada said it is important to avoid stigmatizing affected children,

She recalls how children born during the crack cocaine epidemic of the 1980s were treated.

“Let’s not repeat what happened during the cocaine epidemic,” Bada said.

A wave of media reports decried the oncoming wave of “crack babies” that would grow up to have physical, cognitive, and behavioral issues for the rest of their lives.

Nothing I Wouldn’t Do: Grandparents of The Opioid Generation from 100 Days on Vimeo.

Early research has indicated that in-utero exposure to opioids has more of a lasting effect on newborns than crack cocaine.

But avoiding stigmatization is as critical.

Some experts believe the stigma attached to children labeled “crack babies” was more damaging than the prenatal drug exposure. 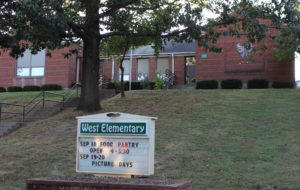 “They said, ‘Oh, they’re going to have a lot of malformations’ and all that stuff.’ And really, they didn’t,” Bada said. “They’re just like other normal kids.”

Day by day he and other educators work to address the problems surrounding NAS by focusing on the children first.

“We don’t identify kids by what their deficiencies are,” he said. “We identify children as children, and treat them as part of our school community.”

This story is part of the series Born Exposed, a project of 100 Days in Appalachia, West Virginia Public Broadcasting and the Ohio Valley ReSource.