Standing on the breezy outlook at Flag Rock Recreation Area, Norton City Manager Fred Ramey is taking in the panoramic view of downtown Norton, Virginia. The brick building-lined streets are framed by the verdant, rolling Appalachian mountains. Jagged, brown scars from mountaintop mining operations can be seen in the distance, reminders of the region’s history of coal production.

“It’s a great overlook of the city, and people really are surprised when they get up here at the view,” he says. “It’s truly beautiful, and it’s unique. It’s something that we have that not everyone else has.”

This view — and Norton’s abundance of nature and outdoor recreation opportunities — are what Ramey and others here are hoping will be the next chapter in the region’s history. 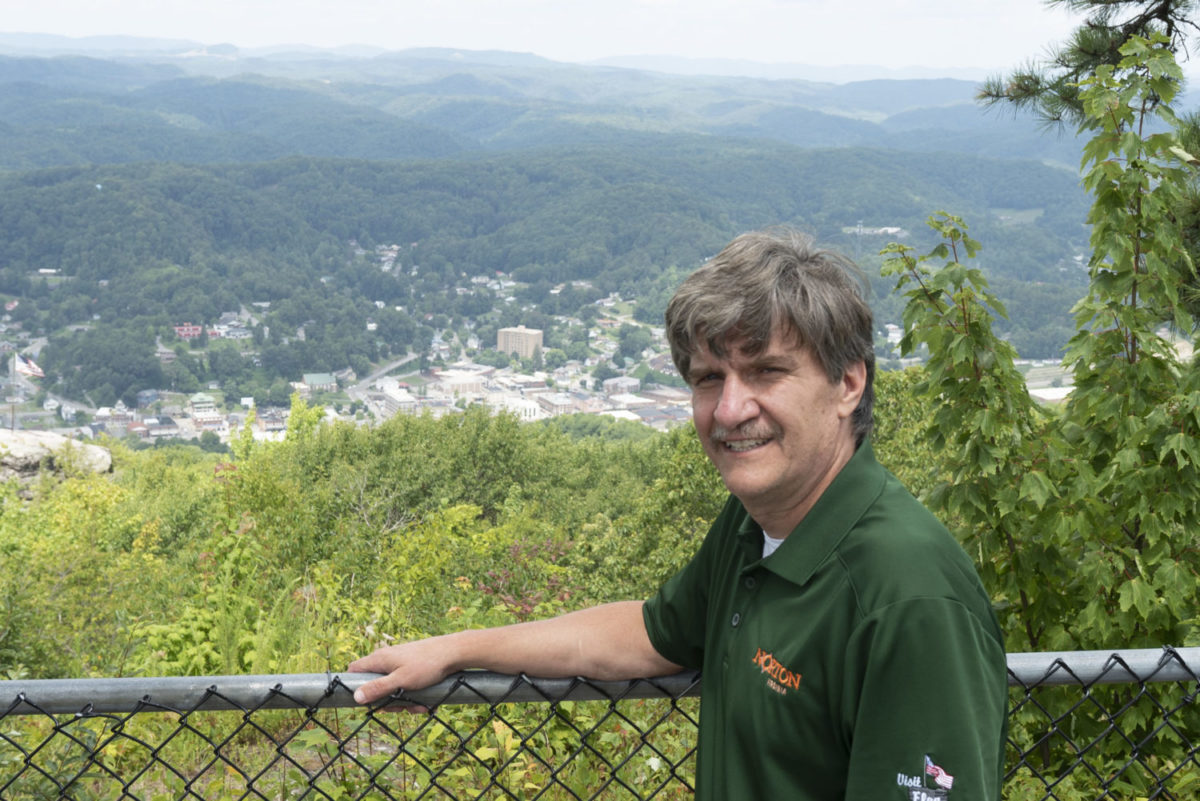 The first chapter was coal.

Norton was named in the 1890s after the president of the Louisville and Nashville Railroad. The community of about 4,000 sits in Wise County, which borders eastern Kentucky. Coal has been mined in these mountains for more than 140 years. 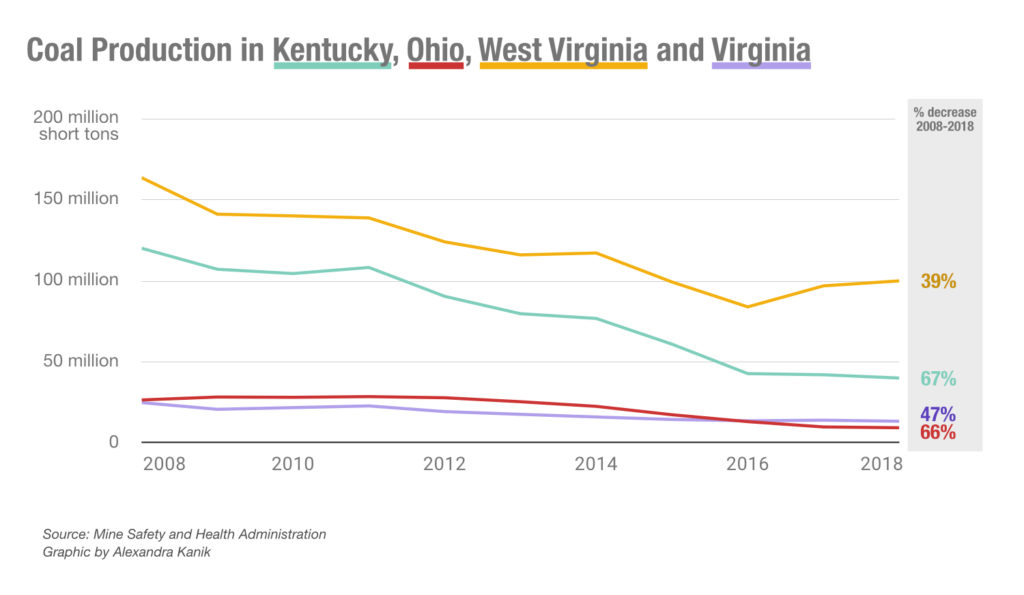 “In a certain way, our community has found itself at another intersection due to the loss of coal,” Ramey said. “And that’s when we had to really start thinking differently.”

Norton, like many regional communities, began looking at how to diversify its coal-based economy. One resource it has in abundance is nature. 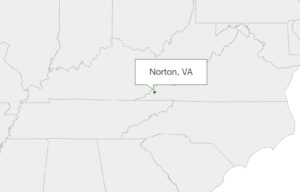 The city is located near Jefferson National Forest and Stone Mountain. Its peak, High Knob, is the wettest area in Virginia and the area is rich in biodiversity. For example, more than 20 species of salamander are known to live in the region.

In the 1970s, Norton began developing the Flag Rock Recreation Area, a 1,000-acre park a few miles from downtown. Norton ramped up those efforts more recently and the park is a central piece of the city’s plan to reorient its economy to outdoor recreation. New campgrounds and hiking trails have been built. A visitor’s center that will be easily accessible from downtown is in the works.

The city has also built eight miles of mountain bike trails, with more in development.

“When you have mountain bikers come to your to your town, they’re going to come out of the woods and come down and frequent your restaurants,” Shayne Fields said. He’s trail coordinator for Norton. “If we get enough trails here then they’re going to come and stay multiple days. So, you’ll have patronage at your restaurants, your hotels, any little shops you have in town.” 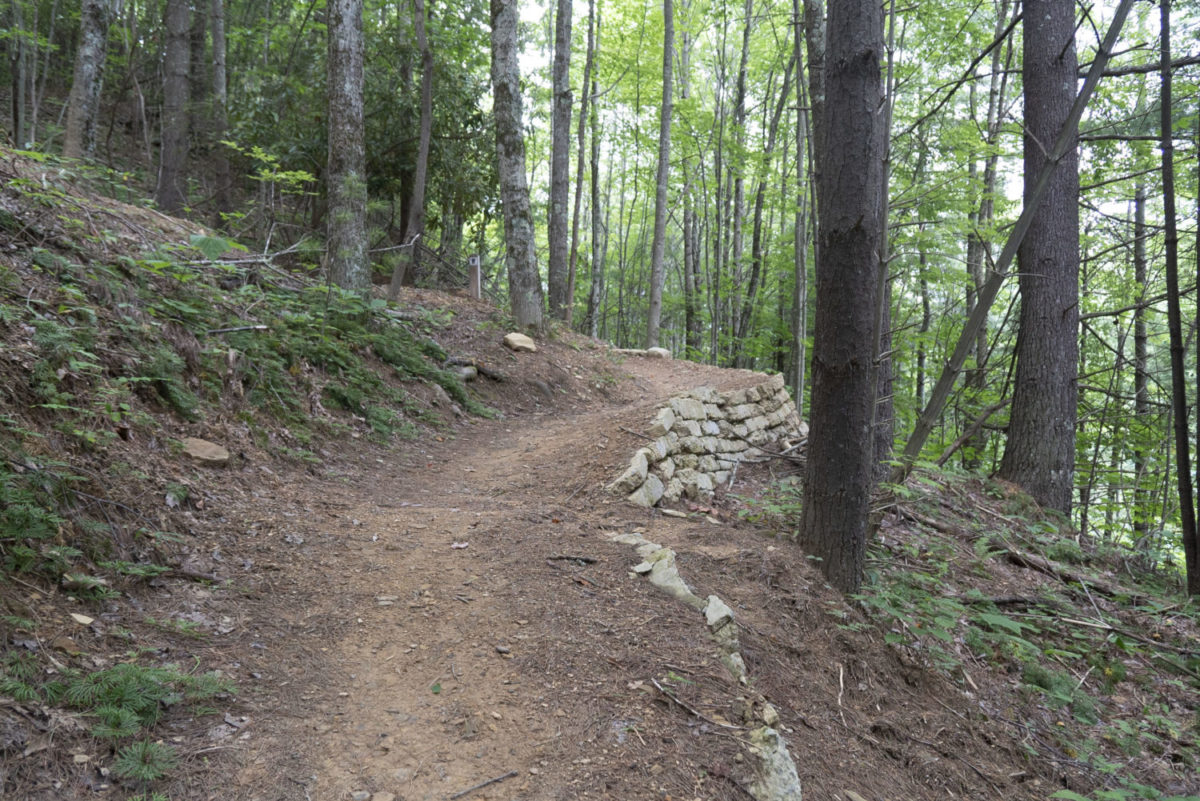 Fields would know. An avid cyclist himself, he and his friends have traveled around the country in search of good mountain biking.

“Normally, when we go someplace, we come out of the woods hungry,” he said. “And the first thing you want to do is go find some really good fatty food and a craft beer somewhere.”

Fields grew up in Norton. He can remember the heyday of coal and has seen the impact its decline has had on the region. Wise County is losing population. About 23 percent of its residents live under the poverty line and the region is often considered ground zero for the opioid epidemic.

Recreation isn’t a silver bullet, Fields said, but it could be a key part of the solution.

“If we want to get an industry here — something other than the coal industry, you know, since it’s probably not coming back — we’re going to have to provide some kind of environment here that’s going to make those young working people want to stay here,” he said. “If we’ve got a good recreational economy-based setup here, we’ll have venues for people to come and play.”

Researchers who study economic transitions in coal-dependent communities say diversification is not easy. Many of these communities are located in rural areas, isolated from cities and lacking their amenities. In some cases, political leaders cling to the idea of coal comeback, which stalls action.

“The biggest problem is the loss of employment, particularly of high wage jobs,” said Mark Haggerty, with the Bozeman, Montana-based nonprofit research group Headwaters Economics. “And just as important is the loss of revenue that supports schools and libraries and local services that keep these communities vibrant and attractive places.”

Haggerty has been studying coal community transitions for a decade and said several communities have had success making the transition from mining to outdoor recreation. He pointed to Gallup, New Mexico, a former hard rock mining community, which has now designated itself “The Adventure Capital of New Mexico.” Due to its proximity to the New River Gorge and world class river rafting, Fayetteville, West Virginia, has boomed in recent years. 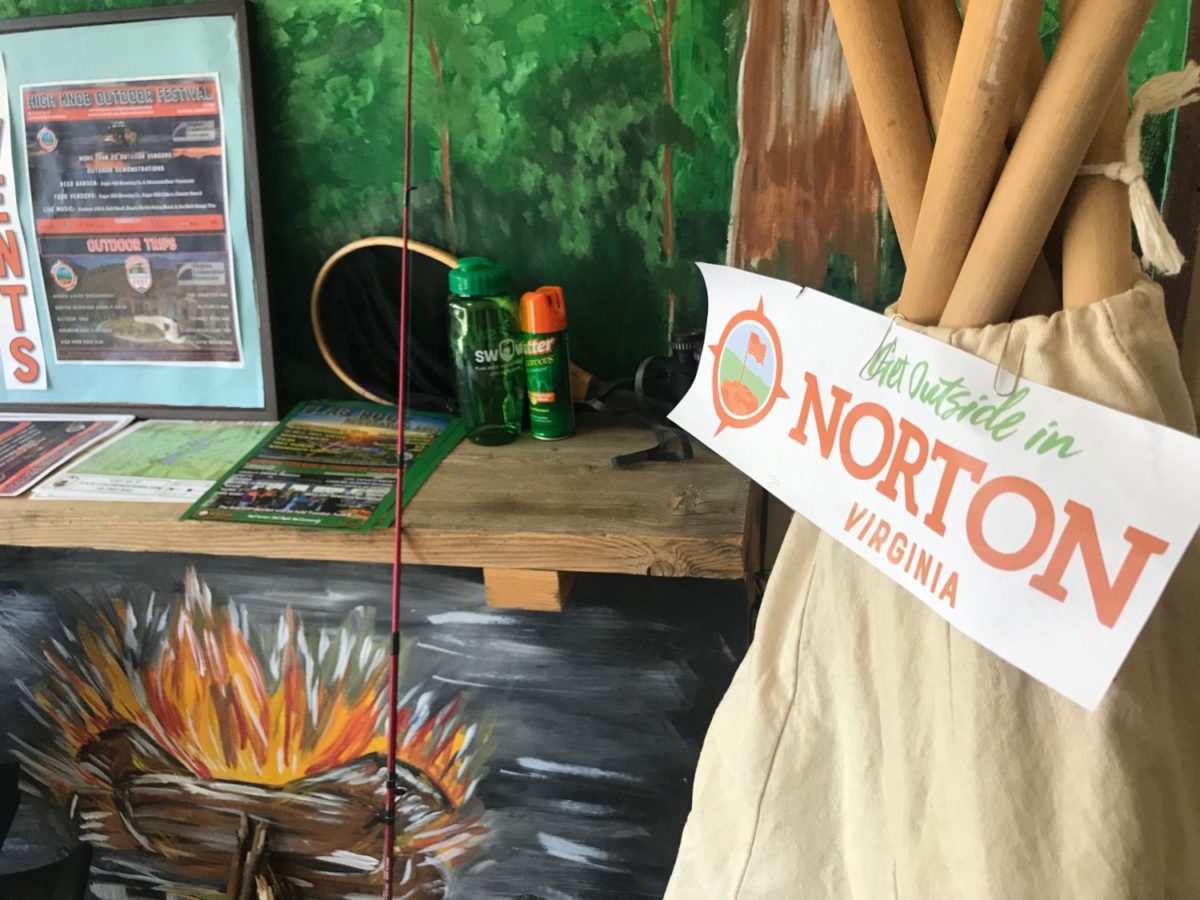 Norton, Virginia has launched a “Get Outside” campaign showcasing its natural resources.

Recreation can be a tool, and a powerful one for coal-dependent communities seeking to diversify their economies, but shouldn’t be the end goal, Haggerty said.

“Recreation is really a means to an end,” he said. “So what a recreation strategy does for you is it makes your community more attractive, and it has to be set within a broader economic development strategy that includes making sure you have broadband connectivity, making sure you have good schools and healthcare in place and other kinds of cultural amenities.”

The cost of doing business in coal-dependent communities can also be higher due to the legacy costs left by the coal industry, said Chelsea Barnes, the new economy program manager for the environmental group, Appalachian Voices.

“There are safety hazards or health hazards, or they’re lands that are just not ready for a new business to come and build,” she said. “And we have to make sure that the land that people are visiting is safe, and the water they’re drinking is safe, before you invite large crowds of people to come and visit.”

Norton City Manager Ramey said the city is clear-eyed about the limitations of its budding outdoor recreation industry. In addition to questions about mine cleanup, some have expressed concerns over the wages of tourism-related jobs — selling hiking gear or serving beer often pays less than the mining jobs of the past.

“We’re not saying that tourism is going to be our answer, but we believe it can be part of the solution,” he said. “For a small community to have this kind of asset, you know, is a phenomenal opportunity for us, and it has to play into the discussion as we discuss our community’s future.”

On the other side of town, Norton is engaged in another economic diversification effort. With a federal Abandoned Mine Land Pilot Program grant, the city is converting a 200-acre, vacant surface coal mine into an industrial park. Ramey said they hope the space will attract manufacturing and technology companies. University of Virginia’s College at Wise is nearby, providing an educated workforce. Once completed, the project is expected to create 63 jobs.

Without federal investment, Ramey said, the city’s efforts to diversify would be greatly hampered.

“Without those types of opportunities, the hole we would be digging ourselves out of would become so much deeper,” he said. “It acts as a lifeline to a certain extent having resources, not just the financial resources, but the people resources that these agencies provide, to come in and help.”

Norton has also held help from an unlikely source. In 2011, Animal Planet filmed an episode of its program “Finding Bigfoot” in southwest Virginia.

A local legend about a bigfoot-style creature, dubbed the “Woodbooger,” got national exposure.

“No one even knew they had been here,” Ramey said. Soon, tourists in search of the “Woodbooger” were flocking to the area. Norton leaned in. In 2014, the city declared Flag Rock Recreation Area a “Woodbooger Sanctuary.” Local businesses pitched in to buy a larger-than-life Woodbooger statue. The local hardware store downtown does a steady business selling t-shirts with the hairy creature’s likeness. 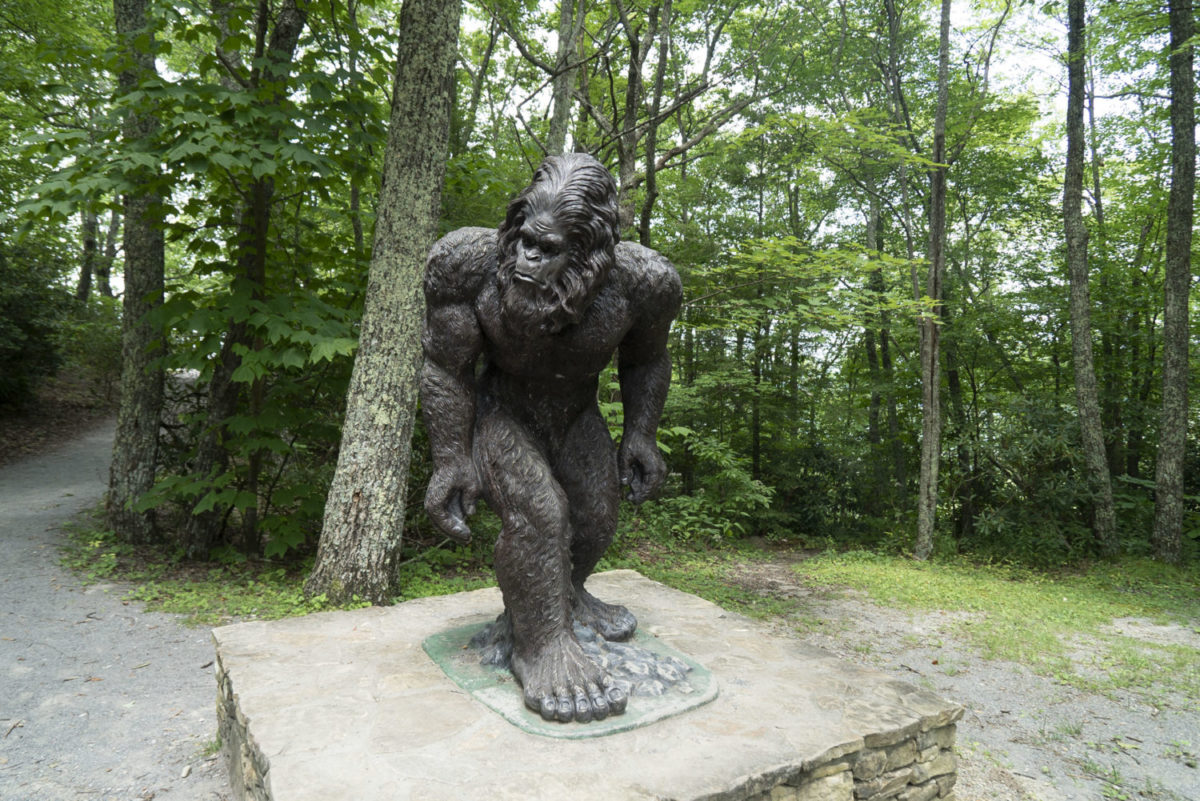 The Woodbooger statue in the Flag Rock Recreation Area in Norton, Va.

A Woodbooger Festival in October draws hundreds of visitors.

It’s hard to measure if the region’s nascent efforts to boost tourism are working yet. But Ramey points to lots of anecdotal evidence, including multiple trail races that have sprung up in recent years.

On a recent visit to top of the High Knob Observation Tower, Ramey turns in a slow circle pointing to Virginia’s neighbors. Four states are visible on a clear day from this perch, 4,200 feet in elevation.

“West Virginia would be that way,” he says. “Mount Rogers, the highest point in Virginia, is that way. Tennessee and North Carolina is that direction And of course Kentucky over there.”

Down in the parking lot, Ramey smiles.

“Interesting fact, at Flag Rock, we had two cars there from North Carolina, and at the tower, we have two vehicles here from Florida,” he says. “So, I would say that’s a sign that the tourism efforts are paying off.”