Isabella Back, 18, pulls her jacket tight around herself as she crosses the gravel driveway. “So we’re going about 10 feet from my house to my dad’s workshop,” she says, and pushes through a door in a big, red barn.

The Kona, Kentucky, shop is crowded with cluttered work tables and hulking machines, and the sound of whirring and grinding fills the air. The shop smells of paint and other chemicals. Back’s dad, Rod, started this metal fabrication shop after he got laid off from coal mining. He mostly makes signs for local businesses. He waves a friendly hello. 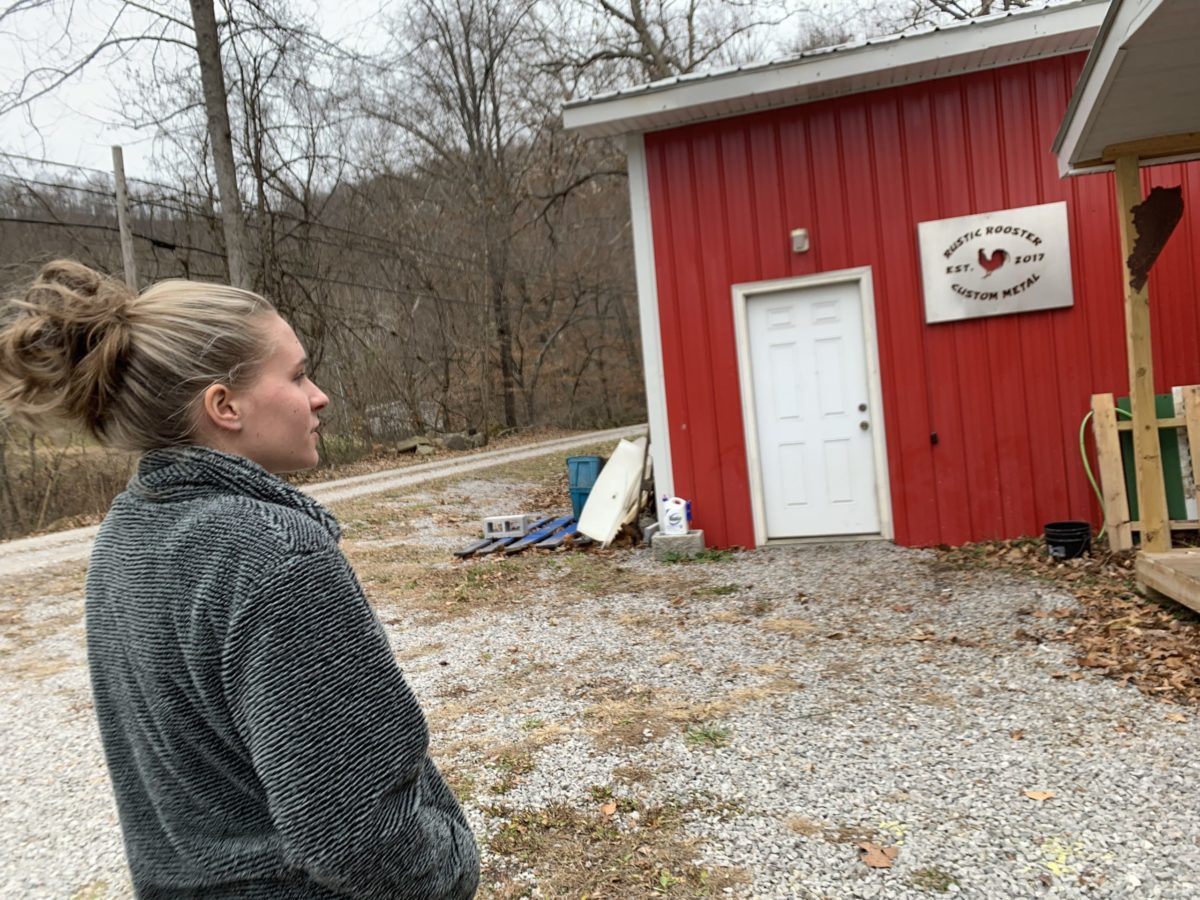 Isabella Back at her father’s workshop in eastern Kentucky.

“He uses so many chemicals to paint the metal, strip the metal, stuff like that,” Back said. “It scares me a little bit, because I don’t want him to get sick.”

Back documented the shop for the Mountain Air Project, a study with the University of Kentucky that explores potential environmental contributors to lung disease in the southeast corner of the state. 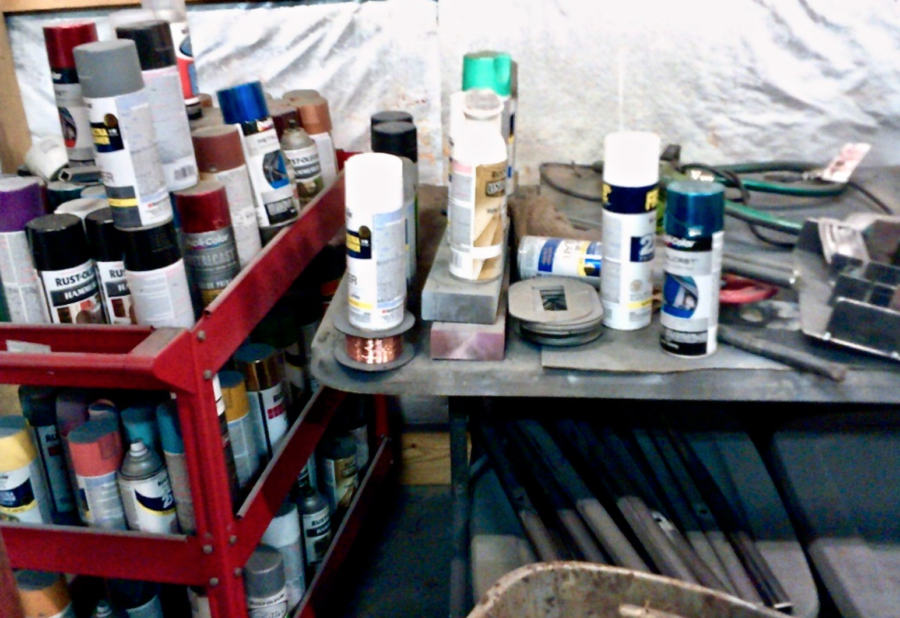 Spray paints in the Back’s workshop.

According to the Centers for Disease Control and Prevention, 15 percent of adults in Letcher and Harlan Counties reported having an asthma diagnosis, compared to 8 percent nationally. Rates of COPD were also higher in eastern Kentucky.

Higher rates of smoking explain some of that disparity, said Mountain Air Project manager Beverly May, but not all of it. “The question from a research perspective is,” May asked, “what other things might be contributing to the disease, and could it be our environment?”

In addition to an epidemiological study, researchers employed a research practice called Photovoice, which asks people in a given community to use photography to share their experiences and perspectives with researchers who are typically not from that community. After receiving photography lessons from esteemed Appalachian photographer Malcolm Wilson, 10 young people between the ages of 12 and 18, all attending Letcher County schools, set out with digital cameras to document contributors to lung disease in their communities.

“To our knowledge, this is the first Photovoice project in the Appalachian region to specifically involve youth focusing on environmental health,” said University of Kentucky researcher Katie Cardarelli.

Researchers analysed the students’ photographs to identify larger themes which might have gone unnoticed in a traditional health study. One such theme was the choices many east Kentuckians have had to make to earn a living.

Several photographs expressed deep concern for the dangers that coal mining posed not only to individual coal miners, but to whole communities exposed to particulates from resource extraction. One student submitted a photo of a coal-transport railroad visible from their backyard. “Our area has been coal country for years,” wrote the student photographer, “exposing us to things that people in most parts of the country are not exposed to.” 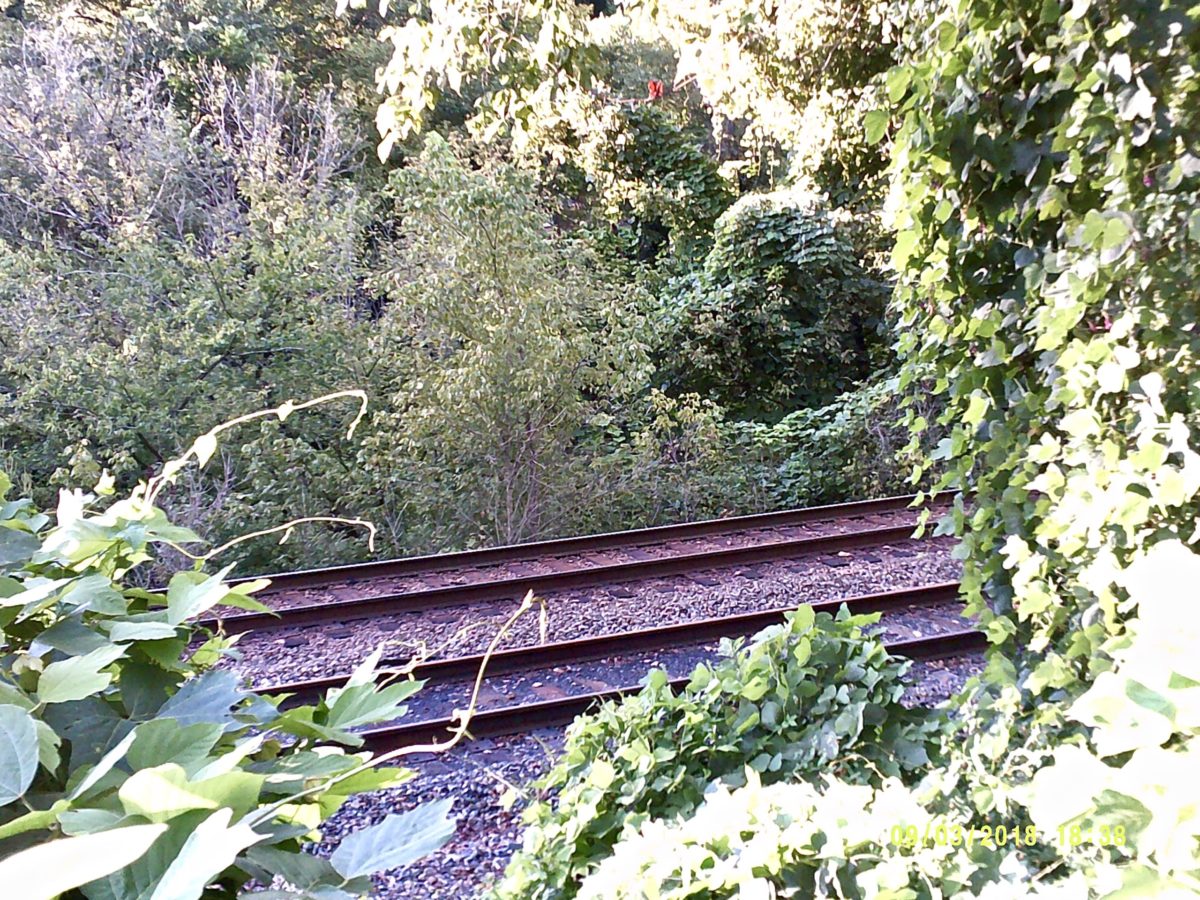 Several earlier studies show higher incidence of disease in communities near large-scale strip mines. This one, however, did not. UK researcher Jay Christian said his analysis of the current contributors to lung disease did not point to environmental exposure from coal mining or oil and gas drilling. “We’re not finding clear evidence of population-level exposures that appear to be driving the high rates of lung disease,” Christian said. But previous exposure may still have contributed to current instances of disease.

“Coal mining has decreased very rapidly in the region,” he said. “So it’s hard to know how airborne particulate levels in the region now compare to those 20 years ago.”

Occupational exposure to coal dust remains a significant factor in the region, with rates of black lung disease skyrocketing in recent years.

“There were a lot of photos that our participants shared with us that took place on porch settings,” Cardarelli said. “A lot of these youth talked about, for example, if they wanted to spend time with their families, that might have to occur on a porch where a lot of smoking was going on.” 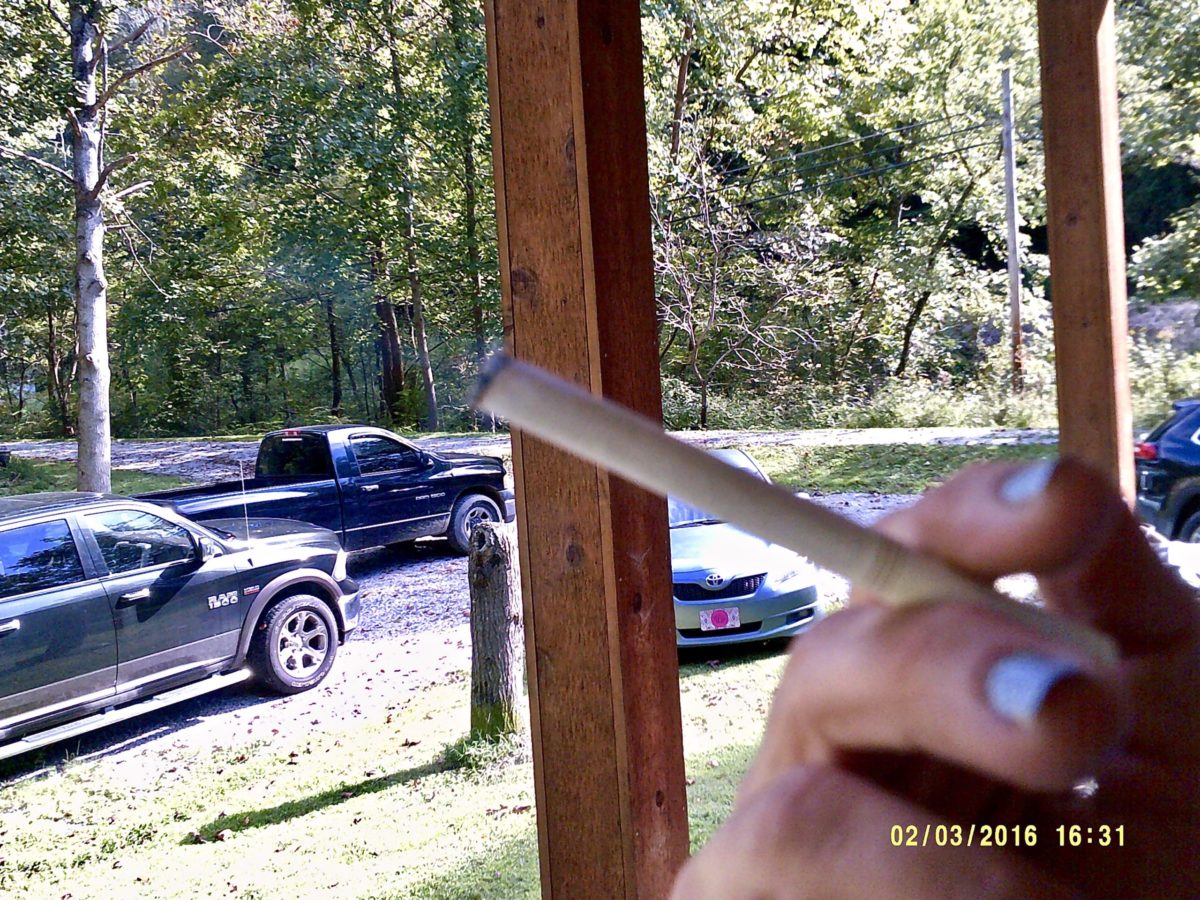 Smoking rates in Kentucky are among the highest in the nation, behind only Guam and West Virginia.

Kentucky had the dubious distinction of placing three counties among the country’s top 10 for highest rates of smoking in 2012. Eastern Kentucky’s Clay County had a smoking rate of 37 percent. In Letcher County, where Back lives, 30 percent of adults smoked cigarettes. 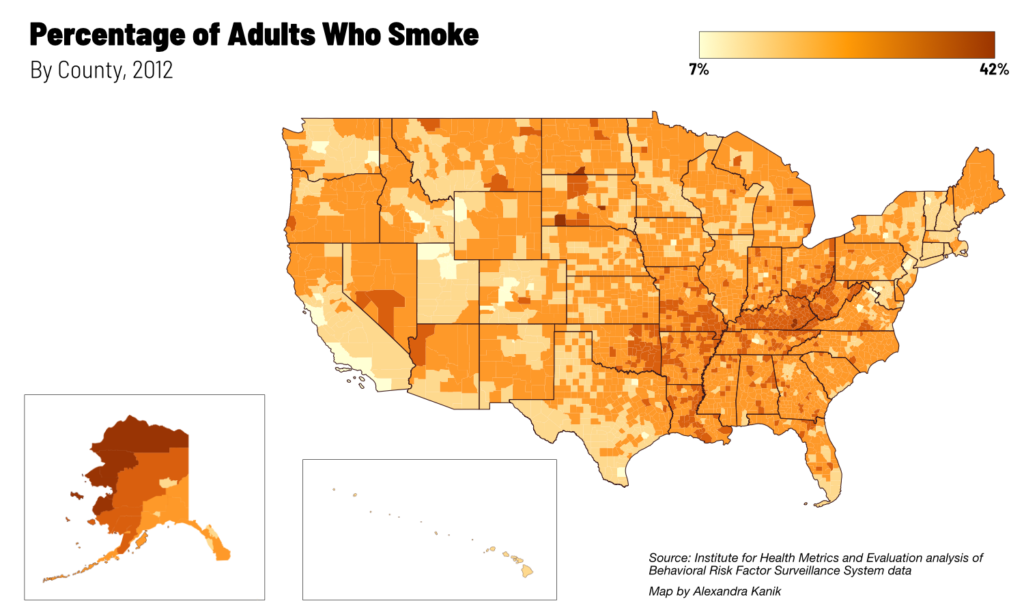 Back recalls an instance from when she was 17, driving home with a member of her family who smokes. The pair stopped at a gas station, and Back wanted some water and some chips. But she knew her family member only had enough money for gas and a pack of cigarettes. So she kept silent. “I didn’t want them to not be able to get their cigarettes,” she said. “I didn’t want to inconvenience them like that.”

Back documented the incident in a photograph for the study. In the image, a package of cigarettes lies open on a table next to a scattered handful of coins.

“It’s not an everyday thing for me to choose between food and a pack of cigarettes, but I know for so many people in eastern Kentucky, it is,” Back said. 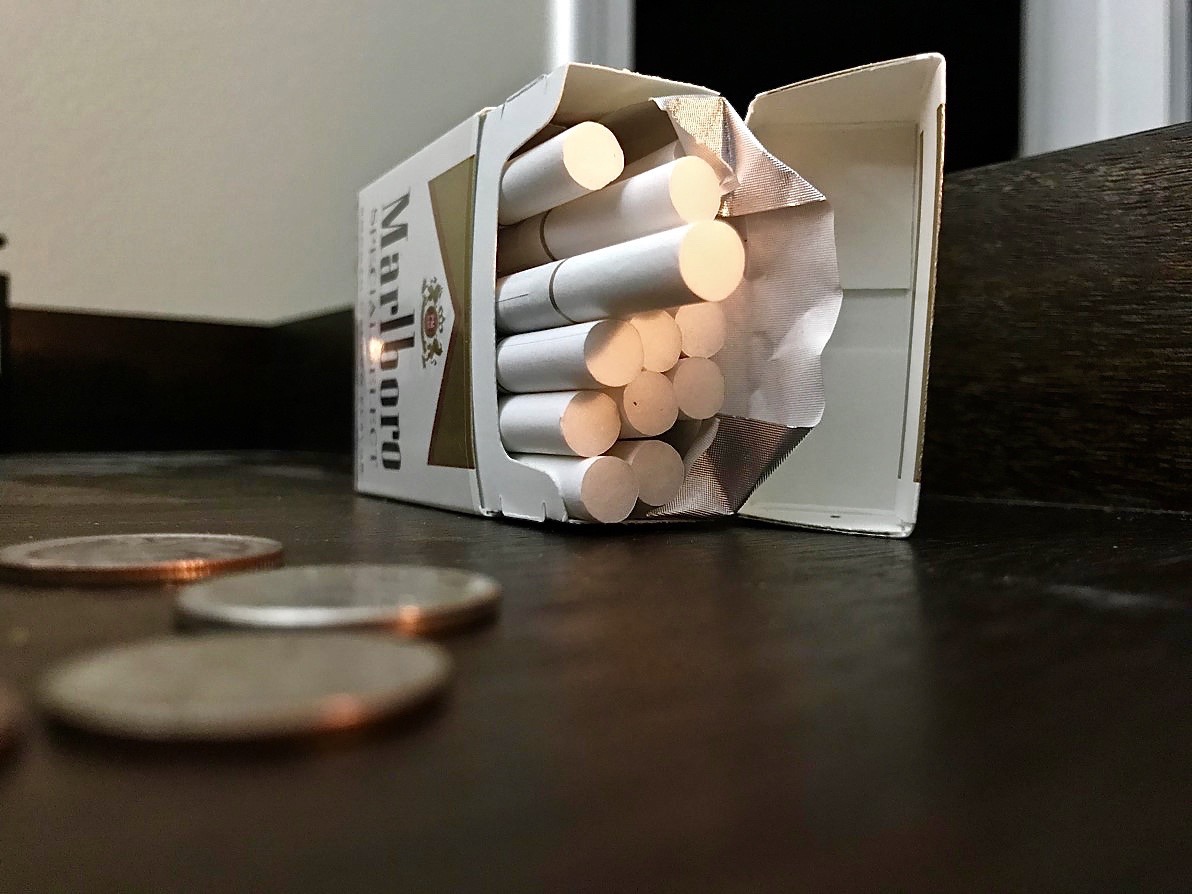 An image Isabella Back provided for the Mountain Air Project.

The Photovoice project wasn’t the only part of Mountain Air to use alternative research methods. The researchers collaborated with a community advisory board made up of east Kentucky residents to make sure local people’s perspectives were taken into account.

Roy Silver is a professor at Southeast Kentucky Community and Technical College, and he served as the chair of the advisory board. “Frequently, when researchers want to research what’s going on here in the mountains, they don’t work with the local people to figure out what are the best ways to do that, and also how to take that research and make it of use to people locally to improve the quality of life.”

One day in 2014 when researchers and community members were gathered together on someone’s porch, they stumbled upon a novel approach to collecting and analyzing: Hollers.

Those narrow valleys, with their central streams and single-access roads, define the mountain way of organizing communities.

“Wouldn’t you think, if you’re concerned about environmental exposures, that the people who all live in the same holler would have pretty much the same exposure? And that’s just us talking as hillbillies,” researcher May said.

Back at the University of Kentucky, Christian took the idea and found that where county-level environmental health averages may obscure variations of exposures, hollers corresponded neatly with federally recognized 14-digit hydrologic unit codes – that is, small segments of creeks and streams that all lead into the same body of water.

“They tend to be formed around these little valleys and areas with little creeks running down them, which is why they line up so well with hollers,” Christian said.

May said innovations like that, coupled with the community involvement, meant that the project “helps us dig down into how people really live.”

The community advisory board also suggested including local young people in the research.

Although the Mountain Air project considered Photovoice an “exploratory study,” students identified factors contributing to poor air quality that the researchers might not otherwise have considered. Students photographed citronella candles, moldy showers, dusty air vents and heavy pollen. Those factors are unlikely to be significant contributors to eastern Kentucky’s higher rates of lung disease, Cardarelli said, but the researchers may include at least some of them in a second iteration of its household survey.

“My colleagues and I were so impressed with the youth participants from Letcher County,” Cardarelli said. She hopes to involve youth in the next Mountain Air project, and is already working to involve young people in some data collection. “They clearly have a role in the future to make their communities better.” 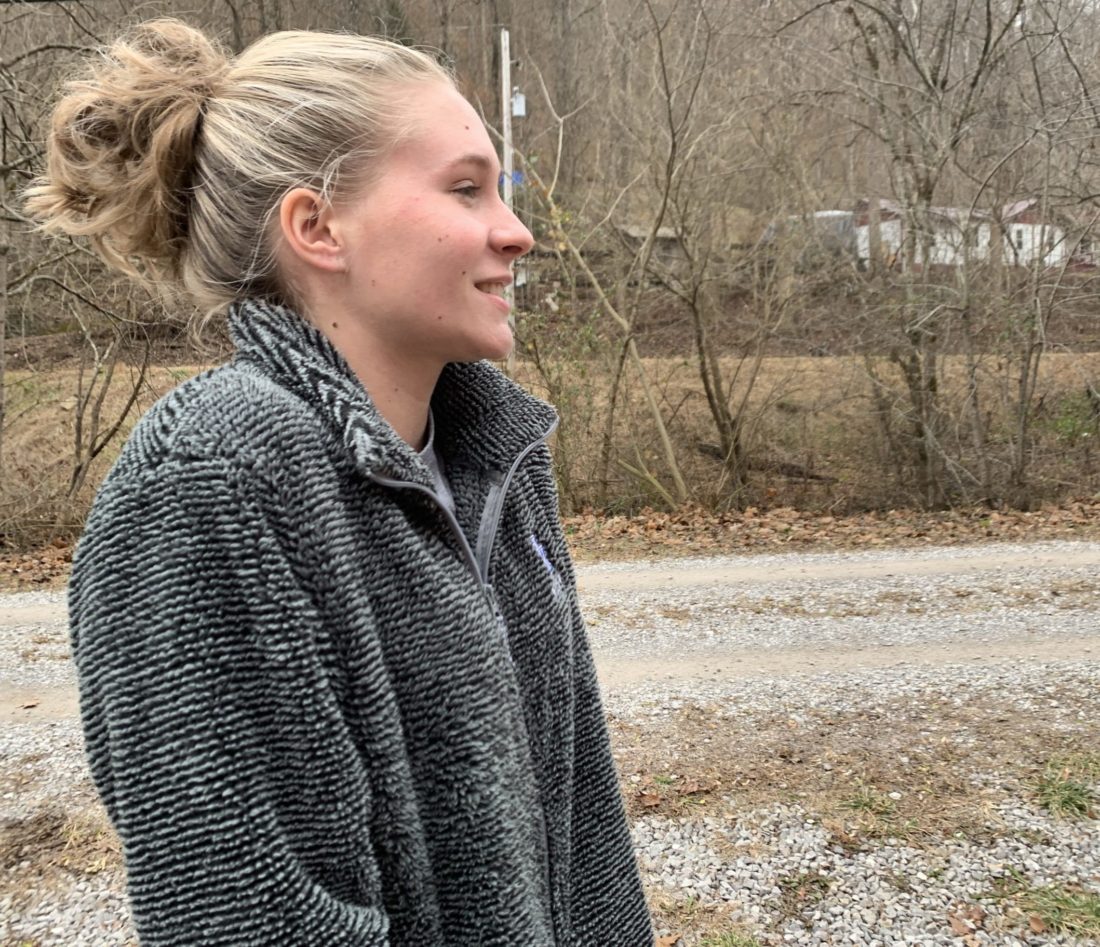 The project brought lasting value to participant Back. “I don’t think there’s a lot of young people to talk about things like our environment,” she said. “You don’t have a class in high school to teach you to speak up about things like this.”

Now a freshman at Georgetown College in central Kentucky, Back hopes one day to move home to help the community move forward. “I feel like I have a greater appreciation for using my voice as a young person, because people will listen to you, and people will take your ideas and your perspectives into account.”

The youth Photovoice study was published in October in the International Journal of Environmental Research and Public Health. An article on the novel use of hollers for conducting epidemiological research will be published this month in the Journal of Progress in Community Health Partnerships. The full epidemiological study is forthcoming.