The Ohio Valley’s economy could see slower growth in 2020 amid continued anxiety about trade, and possible downturns in both energy and manufacturing, according to analyses and forecasts by regional economists.

Michael Hicks directs the Center for Business and Economic Research at Ball State University in Indiana where he forecasts the health of the manufacturing sector. Hicks expects manufacturing to slow down, and he blames the tariffs levied under President Donald Trump’s administration. Hicks said the costs imposed by the trade war are playing out in markets across the region and he predicts the Ohio Valley’s economic growth to slow dramatically in 2020.

“You will see layoffs certainly, lower hours, less generous bonuses both this year and next year, less demand for power which is going to be important particularly in Kentucky and West Virginia, as manufacturing firms both use less metallurgical coal and less coal for electrical power,” Hicks said.

A report Hicks co-authored shows the impact of manufacturing employment on the overall health of the United States economy has diminished. Production is still a large share of the economy. But, he said, the economies of Kentucky, Ohio and West Virginia are heavily dependent on exports, which is why the trade war has and will continue to have a large impact. 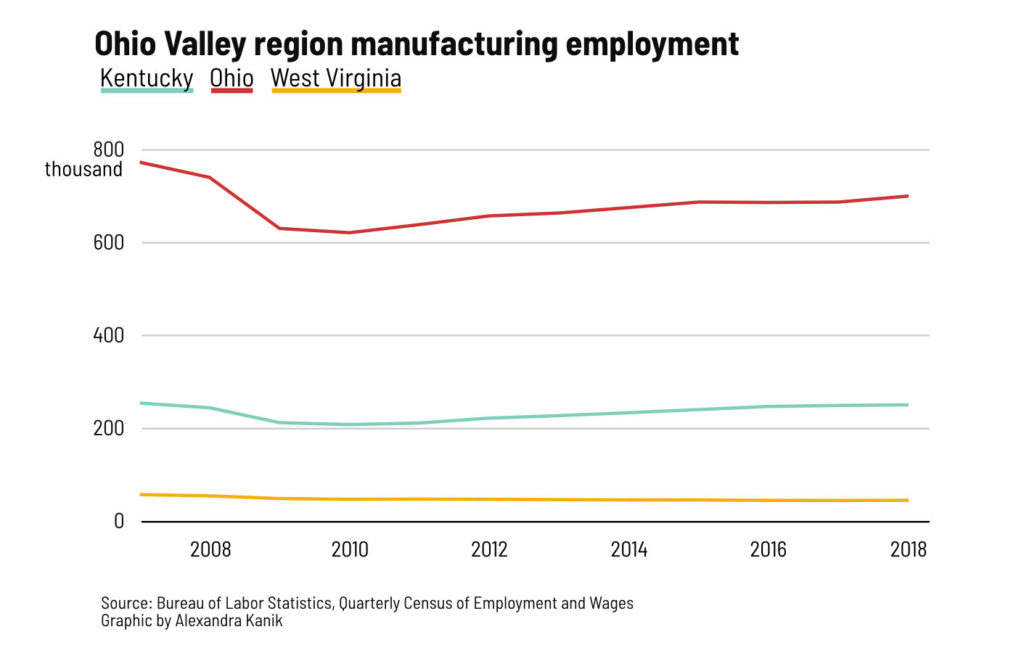 The Trump administration has made some recent moves to improve trade relations. The United States Mexico Canada Agreement or, USMCA, would replace the North American Free Trade Agreement or, NAFTA. USMCA has passed the House and is still pending in the Senate. But Hicks said that trade deal doesn’t offer much assurance.

“The USMCA passage is essentially for your typical manufacturing firm it improves the confidence that we’re not going to have a trade war with our big partners in Canada and Mexico,” Hicks said. “But to just speak candidly, we’re always one tweet away from a new adversary in the trade war.”

He said if European firms are less interested in buying higher-priced American products it’s enough to cause a significant decline in the demand for goods produced in the U.S. Hicks said that could have a bigger effect in the region than in the country as a whole.

“Which is enough to push Kentucky and West Virginia, Ohio, Indiana, Illinois into a localized recession,” he said. “It’s not enough for a national recession, but it’s enough to give us the feel and taste of what a recession would be like.”

“Ohio is not an island, you know, our economy is closely integrated into the national and international economies,” Schiller said.

Schiller said the largest employers in Ohio are either national or international companies and he expects any change in the state’s economy to be similar to what happens nationally.

In Kentucky, manufacturing plays a significant role in the state’s economy. Jason Bailey director the left-leaning Kentucky Center for Economic Policy. He said manufacturing has grown in large part because of the auto industry, but carmakers are seeing a slowdown.

“We’ve lost a lot of manufacturing over the last couple decades across the state and industries like apparel or furniture manufacturing or computer parts manufacturing, that has often been to cheaper locations like China and in Latin America,” Bailey said.

West Virginia is in a similar position with even fewer signs of economic recovery. West Virginia University’s College of Business and Economics is predicting the economy will expand by about point two percent annually for the next five years. The Executive Director of the left-leaning West Virginia Center on Budget and Policy Ted Boettner said that’s the lowest growth rate WVU has predicted for the state in the past seven years.

“You know since our last economic recession that began in 2007, West Virginia has seen less than a 1 percent increase in job growth over that time,” Boettner said. 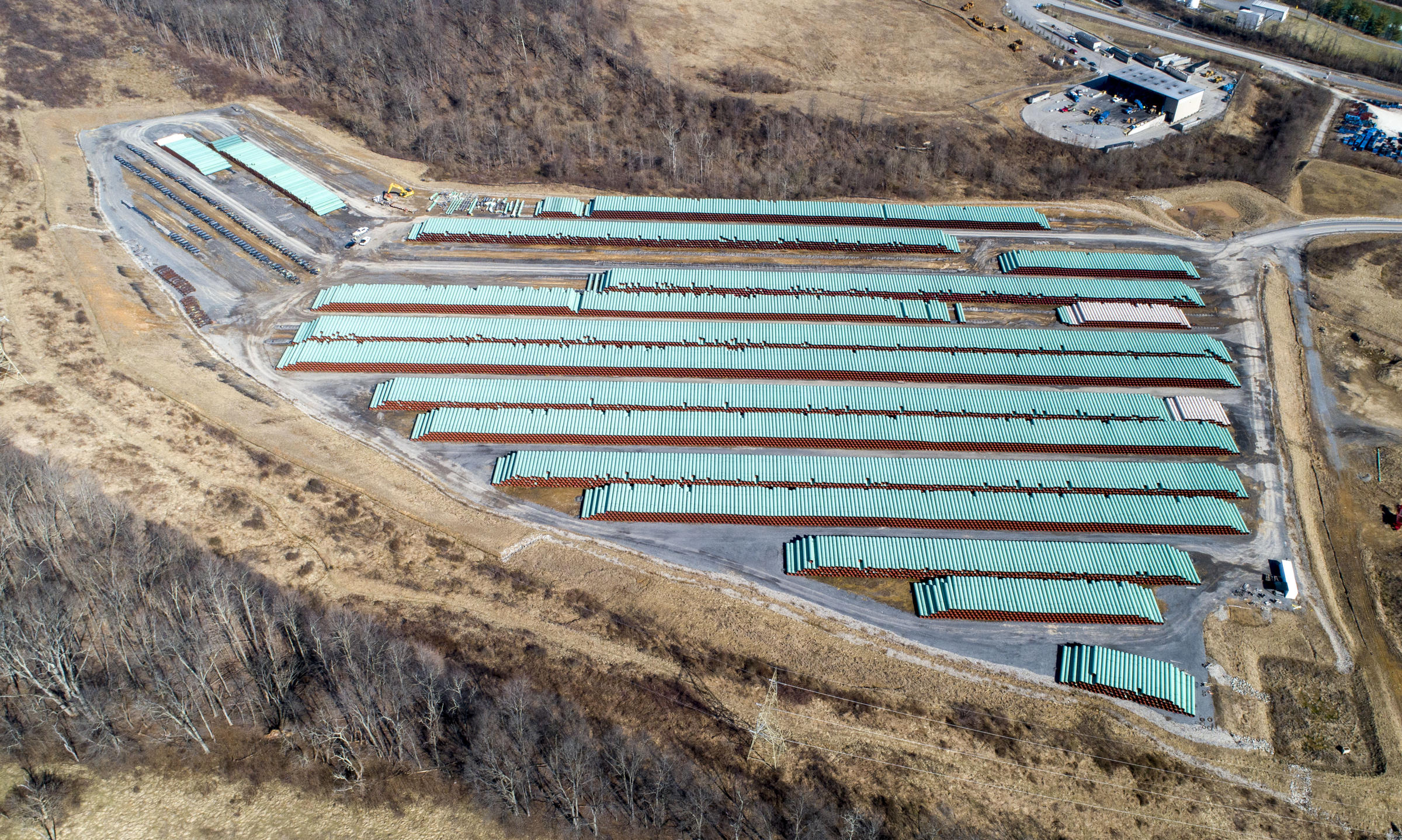 Boettner said the state’s economy has always been on a “roller coaster ride” based on energy markets. The downturn in coal has hit hard, of course, but that was somewhat offset recently by a boost from natural gas and pipeline construction work. Now, however, one major pipeline project is complete and some others have been halted by legal challenges. Boettner said that focus on natural resource extraction can hamper other kinds of growth.

“A lot of other industries, especially ones based in the knowledge-based economy don’t really want to be around extractive industries,” Boettner said. “They don’t want to be around a lot of pollution, and things like that. So you really are choosing one over the other in some sense.”

Boettner said the state has never had big urban centers to build a diversified economy around, but he thinks investment in education could help with that.

“I mean, unfortunately, it’s gotten to the point where I think the only way that West Virginia is going to really thrive, potentially thrive, over the coming decades will be unless there’s massive federal investment in the state,” he said.

The U.S. is in the longest period of economic recovery in modern history. Hicks said normally that would mean the country would be running a budget surplus and could start paying off debt or taking on big projects.

“We would have made some long term investments in infrastructure, highways, roads, particularly with transfers to local governments that are, you know, facing a lot of aging infrastructure,” Hicks said.

Instead, Hicks said, the federal budget has a deficit of more than a trillion dollars after tax cuts and what he calls unsustainable federal spending, including the trade bailouts for farmers. And he said those economic policies are not having the degree of stimulus they should, largely because of the negative effects of the trade war.

A report from Ball State notes the Trump administration’s 2018 Tax Cuts and Jobs Act was meant to spur private, non-residential investment. But whatever effect could have been expected was muted by a similarly large tax increase due to tariffs associated with the trade war.

“We are running a budget deficit of $1.1 trillion, which is considerably more than the American Recovery and Reinvestment Act of 2009,” Hicks said. “That was Obama’s large stimulus package passed in February 2009. That was only $856 billion”

As economists across the region watch for signs of the next recession, they also look to infrastructure investment as an area for potential growth. The Ohio Valley has massive funding needs for its roads, broadband internet access, and aging water systems.