A new report finds the Ohio Valley has some of the most disadvantaged communities in the country. The study comes from the University of Michigan’s Poverty Solutions, an initiative to eliminate or alleviate poverty through action-based research.

The “Index of Deep Disadvantage” combines measures of income, health outcomes, and social mobility, or the factors affecting someone’s ability to improve their lot in life.

Two Ohio cities, Cleveland and Dayton, are on the list of the 100 most deeply disadvantaged communities. Other Ohio Valley communities on the list are rural counties: McCreary, Bell, Clay, Wolfe, Breathitt, Harlan, Lee, and Owsley Counties in Kentucky, and McDowell County in West Virginia. The majority of these communities are located in Appalachia.

Luke Shaefer is a professor of social work and public policy and leads Poverty Solutions. He said he was surprised to see that most of the disadvantaged communities were not in urban areas. Of the top 20 most disadvantaged areas, only two were cities — Flint and Detroit, both in Michigan. Kentucky’s McCreary County was the 20th.

“Not to say that we shouldn’t have policies that try to address poverty in our urban centers, but that we should look a lot more at what’s going on in some of the rural parts of the country,” Shaefer said.

Those disadvantaged areas include Appalachia, the Mississippi Delta, the Cotton Belt, Tribal Nation Lands, the Rust Belt and areas near the Texas-Mexico border. 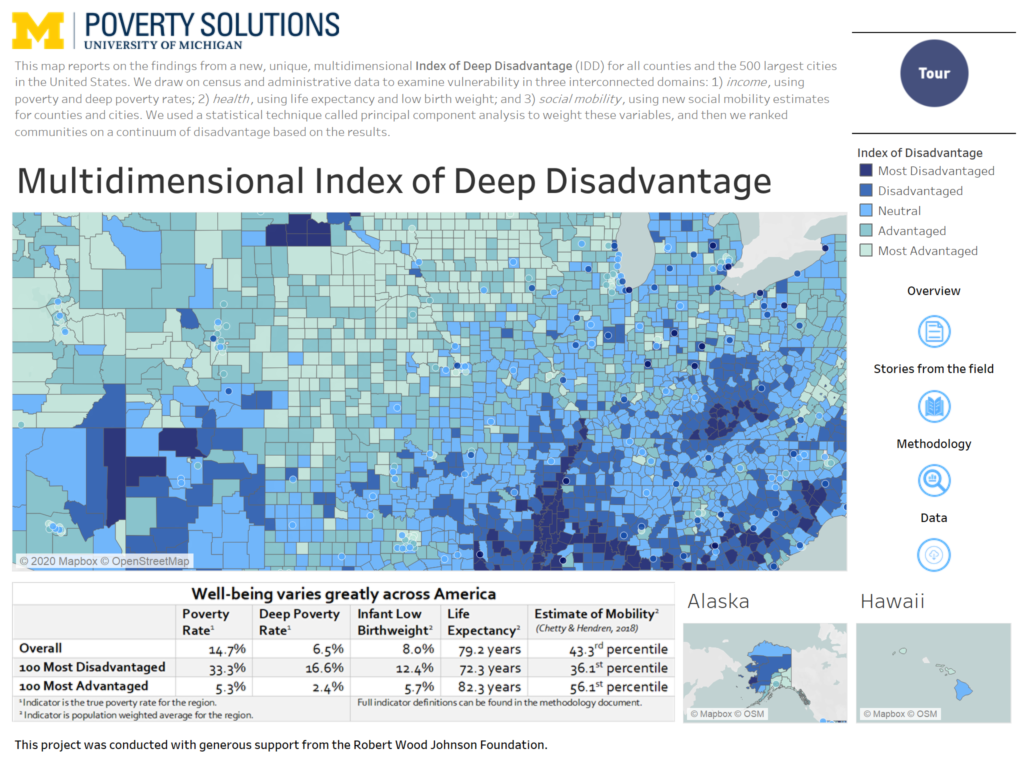 Social mobility is measured using new estimates of household income and how that might affect children whose parents were at the 25th percentile of the national income distribution. The report says this measure characterizes inter-generational mobility, especially for low-income populations who cannot use their own resources to insulate them from differences in community resources.

In Kentucky’s McCreary County, for example, the report found that 41 percent of the population lives in poverty, and 22 percent live in what the authors call deep poverty. Just under 8 percent of people in McCreary have a college degree.

Shaefer said the life expectancy in the 100 most disadvantaged communities, including those in Kentucky, West Virginia and Ohio, is similar to the measures found in countries such as North Korea, Bangladesh, and Mongolia.

Shaefer hopes the disadvantage index will start a conversation with policymakers about the needs of people living in poverty.