Center for Disease Control and Prevention data indicate opioid overdose deaths in the Ohio Valley declined in 2018, the first time in nearly a decade.

Researchers say this is cause for optimism. But two new studies warn that access to medication assisted treatment, or MAT, for people with opioid use disorders continues to be a challenge.

A Johns Hopkins University analysis of the 2017 National Survey of Substance Abuse Treatment Services published Friday in JAMA Psychiatry found problems with MAT availability and use in residential treatment facilities.

A little more than 60 percent of residential treatment facilities did not offer FDA-approved MAT drugs like methadone, buprenorphine and naltrexone on site that year. MAT is a key component for people reaching and sustaining addiction recovery, according to treatment specialists.

Researchers found restrictions on prescribing MAT drugs as one possible cause for the limited availability.

“Prescriber restrictions include prior authorization to prescribe buprenorphine or extended release naltrexone, the requirement that buprenorphine be distributed by an opioid treatment program, or lifetime limits on doses of buprenorphine greater than 8 miligrams,” the authors wrote.

The solutions they offered included partnerships among local medical facilities and improvements in the accrediting and licensing of residential facilities.

The paper argued that a major problem with separating residential treatment and MAT is both receive positive responses from those with opioid use disorders. Keeping them separate could lower the possibility of long-term recovery.

A separate report found that access to one MAT drug was limited in some parts of the Ohio Valley that were also considered to be at high-risk from the opioid crisis.

The Office of Inspector General for the Department of Health and Human Services compared the number and nationwide capacity of providers who had received waivers to prescribe buprenorphine against data that indicates high rates of opioid misuse. The investigation found access to buprenorphine was limited in 56 percent of counties they identified as high risk from the opioid crisis. 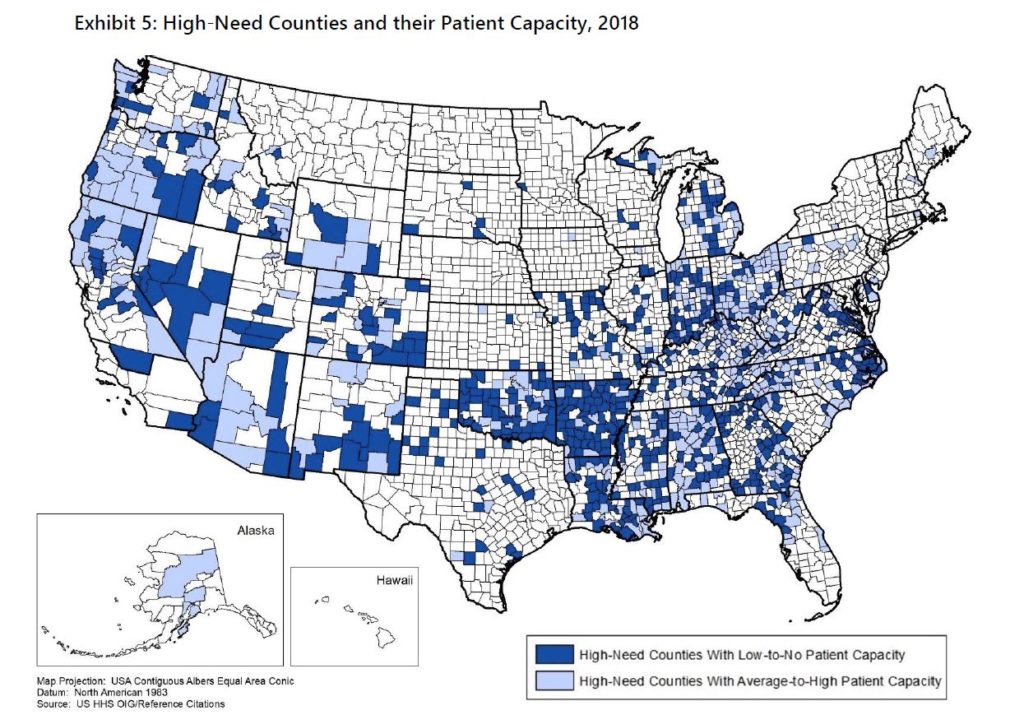 Appalachia was identified as one region of concern with many high-risk counties with low access to buprenorphine. The Ohio Valley, in particular, has around 50 such counties.

Investigators highlighted the challenges of treating people in rural Appalachia with MAT drugs when there are few or no providers. And it encouraged government agencies to work with providers to expand buprenorphine treatment capacity.

“Particular attention should be given to high-need areas with clusters of counties that do not have any waivered providers,” the report reads. “Patients in these areas may have little to no access to buprenorphine services.”

To continue a downward trend of overdose deaths in the Ohio Valley, researchers say it will require everyone who needs MAT having access to it.