Heavy rains caused extensive flooding across eastern Kentucky this week, and city and county officials say it could take weeks to fix some of the damage.

Some residents were evacuated from their homes, and officials across the region declared states of emergency, including mayors in Whitesburg and Jenkins, and county judges in Letcher, Harlan and Knox counties.

“We want people to understand that they’re safe. They’re out doing everything they can do, from the volunteer fire department pumping out basements still today, to the city workers,” said Jenkins Mayor Todd DePriest.

DePriest estimated repairs and overtime costs associated with this flood could cost the city as much as $15,000. “For the budget we have and the money we have to work with, that’s money that could be used to do other things,” he said.

But DePriest’s biggest concern was Jenkins’ historic dam, which was overtopped by the flood water. The flooding covered parts of downtown in more than a foot of water. 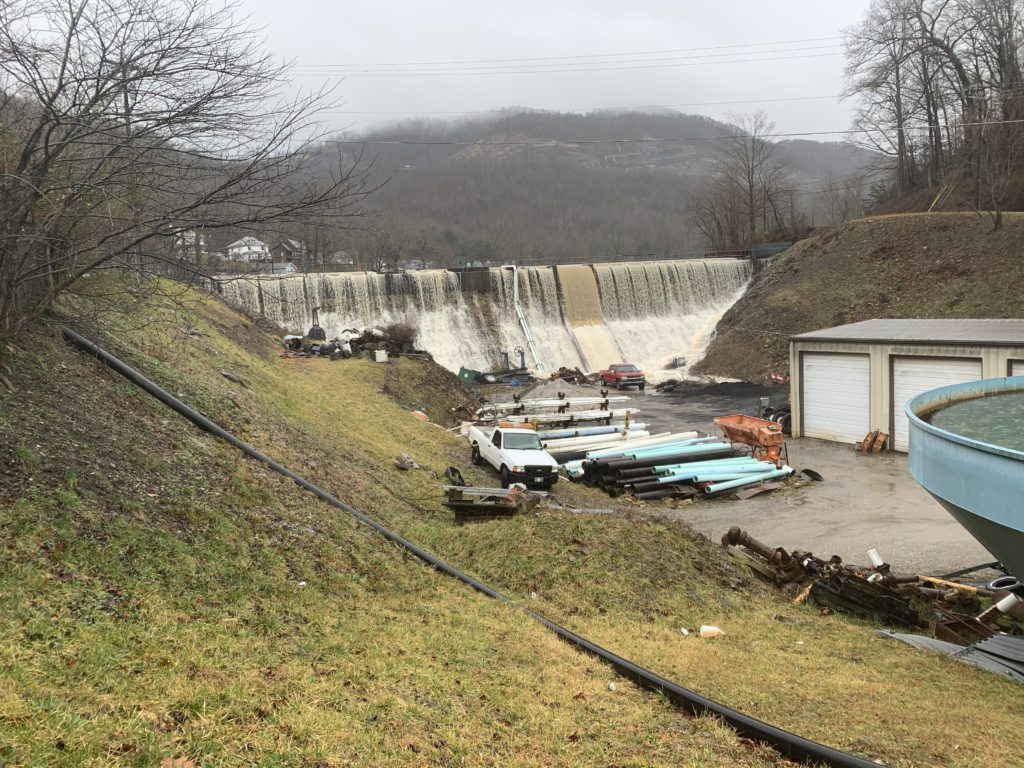 “One big issue we had yesterday was social media and people being worried about the condition of the dam,” DePriest said.

An analysis last year by the Kentucky Center for Investigative Reporting found that the Elkhorn Lake dam above Jenkins is one of Kentucky’s most dangerous. DePriest is working with state and federal officials to develop an inundation map, but as of now, there is no comprehensive emergency plan specifically for a dam break that could flood as much as 30 percent of the town.

DePriest said he had crews keeping an eye on the dam around the clock. Thankfully, it held.

The water that rushed over the dam surged through the water department parking lot and directly into the post office, the dollar store and the Emmanuel Baptist Church. On Friday morning, Tim Richardson and Jerry Puckett were hauling buckets of water out of the church basement.

“This is the first time it’s ever flooded inside here like that, because we’ve never had as much water in this parking lot as we did yesterday,” Puckett said.

Heavy rainfall events have already increased by 20 percent since the early 20th century in eastern Kentucky, and climate scientists believe that the region is likely to see more extreme rainfall in the future.

DePriest wishes his city could prepare for that.

“In an ideal world, if we had money, we would go back in and increase the size of the infrastructure,” he said. “Meaning, if we could go up in sizes in our culverts and so forth to get ready for every event, that would be great. But as of now, with the resources we have, we just sort of deal with it as it comes.”

On Friday, things were getting back to normal in Jenkins. Power had been restored in the post office, and the puddles in the parking lots were starting to drain. But locals are keeping their eye on the dam above town, hoping it will hold in the next rainstorm, too.