On a recent soggy Wednesday evening, dozens of West Virginians packed a conference room inside the Charleston Coliseum and Convention Center to discuss the need for a “just transition” for coal-impacted communities.

As the nation grapples with climate change, the need for a fair transition for workers and communities that depend upon coal jobs and revenue has also gained traction. Nearly every 2020 Democratic presidential hopeful has touted some version of the idea, ranging from the expansive “Green New Deal” championed by Vermont Sen. Bernie Sanders to former Vice President Joe Biden’s more modest mix of worker training and direct assistance for coal country.

In West Virginia, discussions are starting to get attention in the state’s capital despite strong political support for the coal industry.

“When you’re hearing a call for a just transition for coal-reliant communities, folks are saying ‘look, starting now and into the future, we’re going to decarbonize the economy,’” said Ann Eisenberg, a law professor at the University of South Carolina. “There will be disproportionate losses imposed on coal-reliant communities. And that’s unfair. So we’re going to offset the losses. And that is where I think this is a good thing. And it’s also tricky.” 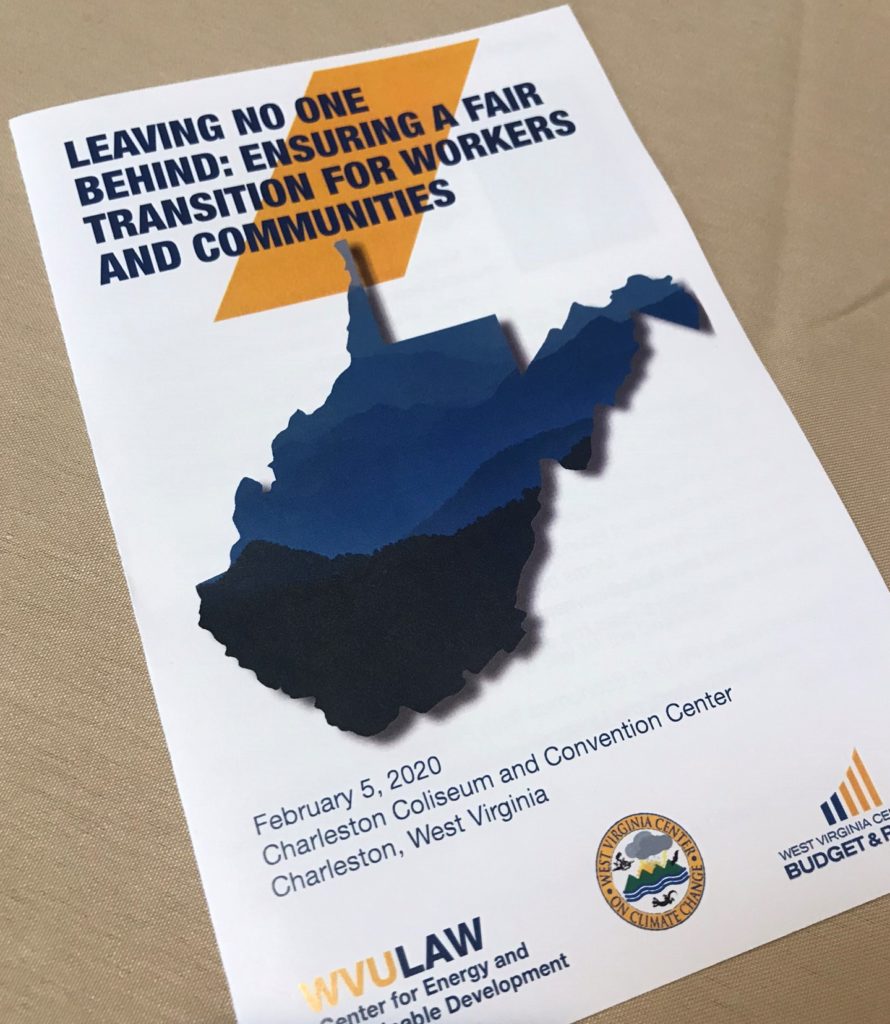 The speakers facilitated a conversation about what constitutes a “just transition” as well as how West Virginia and other regions that depend on coal could actually get there.

Adele Morris with the Brookings Institution said the first step is to acknowledge the clear data about coal. Even without a comprehensive climate policy, the fuel is already losing ground in the region and across the country. Low natural gas prices and the falling cost of renewable energy have priced many coal plants out of the market. 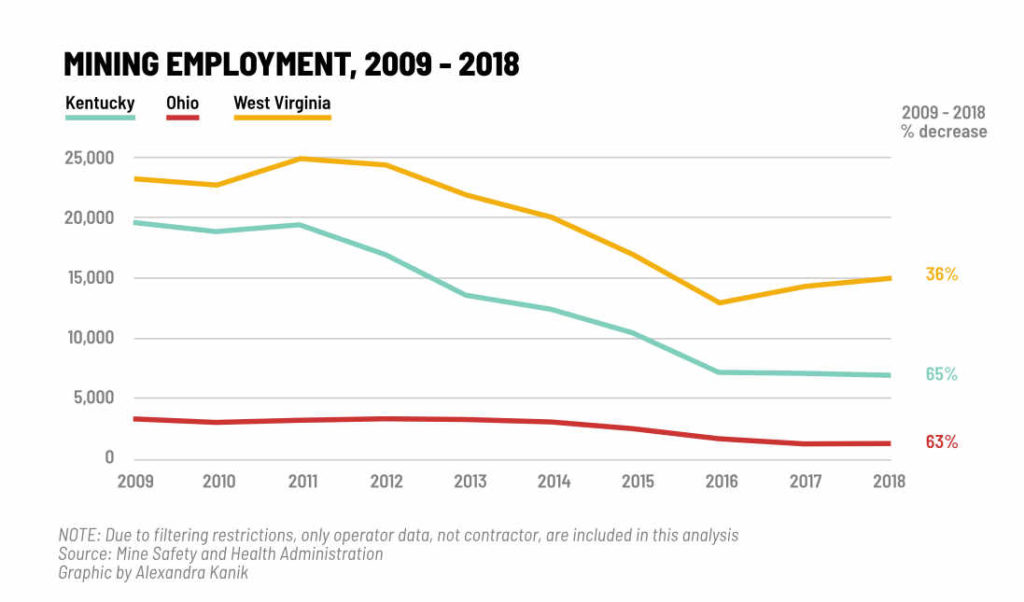 Federal data show since 2009, mining employment and coal production has fallen by about 50 percent in the Ohio Valley. The energy shift is already underway, Morris said, but without the part that would help communities make the transition. 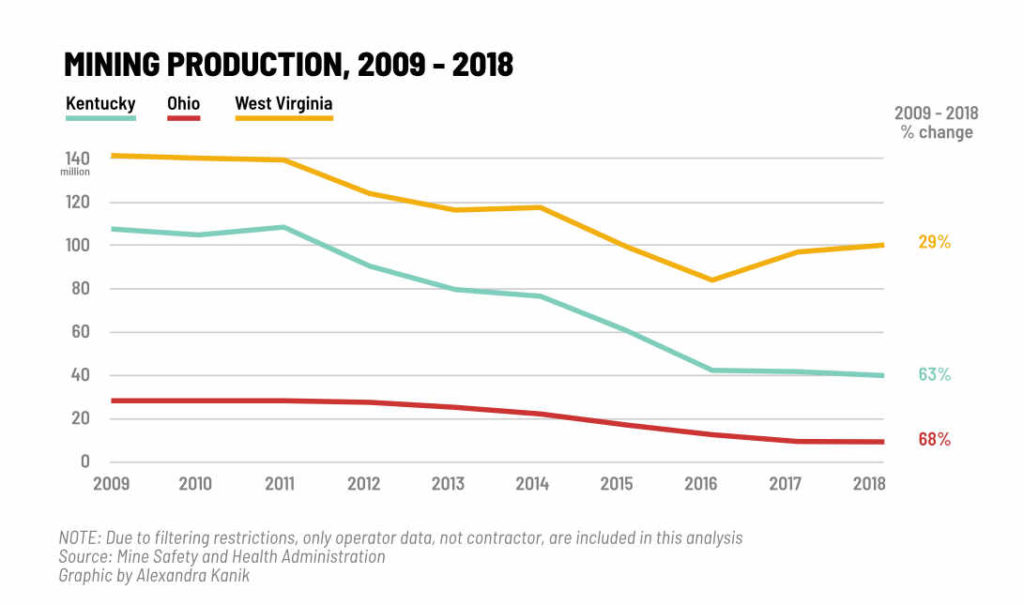 “We’re in it. We’re in the transition,” said Morris, who is a senior fellow and policy director at the nonpartisan think tank. “And it’s going to get worse before it gets better. But it’s not fair. And that’s what I think should be urgently at the top of the agenda of the policymakers from coal country, and they’re not, in my opinion.”

One lawmaker is making a pitch in West Virginia. State Del. Evan Hansen, a Democrat representing the north-central county of Monongalia, has introduced a bipartisan bill that would create a state Just Transition Office, and a community-led advisory committee that would focus on helping West Virginia communities affected by the decline of coal.

The bill is modeled after similar legislation that passed in Colorado. On Wednesday, the West Virginia version passed out of one of the two committees to which it was referred, but Hansen acknowledges it faces a long road to becoming law with the state’s legislative session more than halfway done.

Still, he believes the appetite is growing among the state’s lawmakers to address coal’s decline.

“I would say privately many legislators of both parties acknowledge that there is a transition going on and that this is one of the most important issues that we need to deal with as a Legislature,” Hansen said.

Not everyone is a fan of the bill, including the West Virginia Coal Association.

“Sounds to me like that they think that it would be much better if it were something other than the coal miners,” said the group’s president Bill Raney. “And that bothers me a whole lot because we got the best coal miners in the world.”

Raney’s group is pushing a bill this legislative session that would require West Virginia coal plants to burn the same amount of coal they did in 2019 in the years ahead, regardless of what makes most economic sense.

Of major note during the discussion was how to pay for a “just transition.”

Today most economic transition work in the region comes from federal programs including the Appalachian Regional Commission and Abandoned Mine Land program funding, which offer grants to coal-affected communities in the millions of dollars range.

Morris has estimated the region will require tens of billions of dollars over the next decade and would require some kind of regulatory leadership from Washington, D.C., preferably a carbon tax. Democratic candidates who have supported the idea have differing ways to fund it, although most rely heavily on investing in clean energy and decarbonizing the economy through a “Green New Deal.”

Some in the region have encouraged lawmakers and candidates looking at these climate policies to engage with residents directly.

That includes Cecil Roberts, head of the United Mine Workers of America. In September, he spoke at the National Press Club in Washington, D.C. He expressed concern the type of sweeping change Democratic presidential candidates are promising may be too big of a lift for Congress given its past track record in helping coal country.

“We want our health care saved, and if you can’t do that, and it’s been 10 years, how do you think we’re going to believe that you’re going to be able to give us a just transition from the coal industry to some other employment?” he said.

Chuck Fluharty, President and CEO of the Rural Policy Research Institute, helped to organize a community-centered, just transition model in eastern Kentucky called Shaping Our Appalachian Region, or SOAR. He said SOAR has shown this type of work is possible, especially if a community-centric approach is embraced. However, it’s not easy.

SOAR’s premise is built upon a collective impact investing model that engaged the public, private and philanthropic sectors. 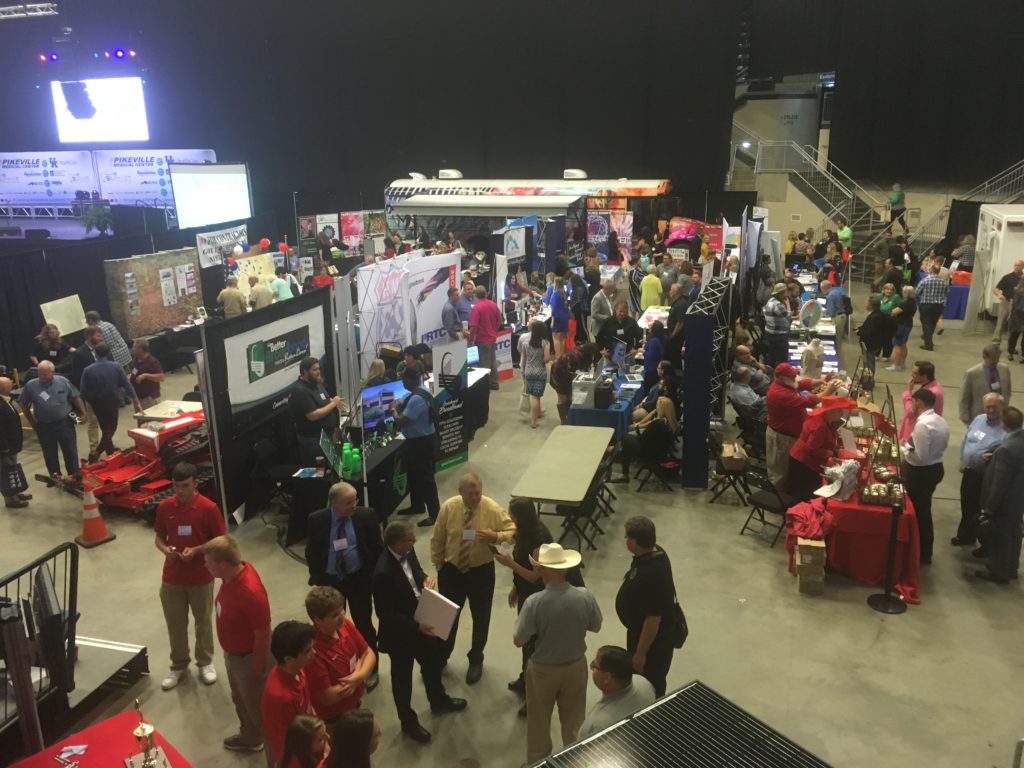 Kentucky entrepreneurs show their products at the 2019 SOAR Summit.

Some politicians hope to engage coalfield communities directly about how to balance implementing climate legislation while protecting workers and investing in communities. Kentucky Democratic state senator and U.S. Senate candidate Charles Booker recently launched a series of town meetings on the subject in the heart of eastern Kentucky coal country.

Even among those who support a just transition, questions remain about how best to do it. Morris said there is little data on what has worked in economic transitions in the past. Her team has looked at the impact of military base closures, for example, but said the analogy isn’t perfect. Worker retraining efforts often have mixed results.

“There’s this policy design challenge of how do you get from the wholesale dollars of the federal government into well designed retail level grants and assistance and so on,” she said. “I’m still struggling with exactly how you do that in a way that gets those resources out, but does it in a way that that gives people comfort that it’s responsibly allocated.”

In a report published last July, Morris and colleagues at the Center on Global Energy Policy at Columbia University quantified just how much of a coal-producing county’s budget came from coal, and how big a hole their budgets might face without coal revenue.

Then the authors turned to the various policy proposals to limit greenhouse gas emissions, which would set a price on each ton of carbon dioxide released to the atmosphere.

Morris said that the revenue generated by such policies could be steered into the type of investments needed and at a scale that would make a just transition more likely.

For example, a carbon tax of $25 per ton would likely raise a trillion dollars in revenue over 10 years, she said.

“And that kind of revenue allows for a very generous support for coal-reliant areas,” Morris said.