Lynn Estel Stanley was the kind of coal mine foreman who wanted to know if there was a safety problem, and would always be the one to go fix it himself. He was also the kind of miner who refused to slow down, even when his men told him he was overexerting himself. But when he was 69, his doctor told him it was time to stop for good.

Stanley wasn’t surprised. He knew he was getting sick. “It kept getting progressively worse and harder to breathe to the point where I just couldn’t do my job, I didn’t have enough oxygen,” he said.

He had watched coal-miner relatives die of black lung, a form of lung disease caused by breathing in coal and rock dust. Particulates lodge in the lungs, causing the tissue to harden and restrict the amount of oxygen that can enter the bloodstream.

Stanley also knew that if he could prove to a judge that he had the disease, he would be entitled to financial benefits. 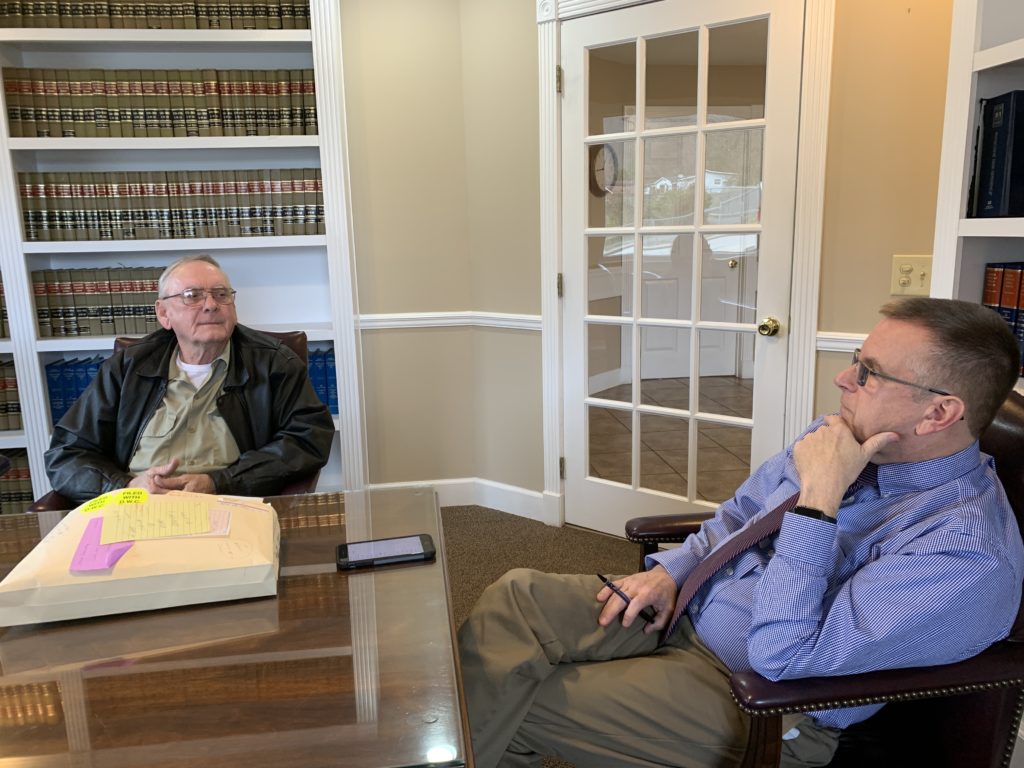 Lynn Stanley, left, is caught up in changes to the law that may make it more difficult for him to win black lung benefits. On right, his attorney Tom Moak.

So he got a chest X-ray, and was diagnosed with progressive massive fibrosis, the most serious form of black lung disease, by a radiologist named Brandon Crum. Over the next few months, three more physicians would tell Stanley he had a serious case of the disease.

But in court, none of that would matter.

As the epidemic of black lung disease continues in Appalachian coal country, Stanley is one of many Kentucky miners caught up in changes to state law limiting who can diagnose black lung.

Two years ago, Kentucky lawmakers made a controversial change to the rules for black lung benefits. Now, state records show that since that change, the percent of Kentucky miners diagnosed by state-approved experts as having the disease fell from 54 percent before the law change to just 26 percent. An analysis of state data by the Ohio Valley ReSource also suggests that the doctors now making decisions on claims more often side with coal companies than with coal miners.

For Stanley that change means that the opinion of one pulmonologist will hold more weight than three other physicians, potentially costing him benefits he’ll need to live with his disease.

In order to be awarded benefits for black lung in Kentucky, a miner or a family member of a miner applies for benefits with the state’s Labor Cabinet. The application includes a blood gas analysis indicating breathing impairment, and an X-ray demonstrating that the impairment is caused at least in part by black lung disease. Pulmonologists typically perform the blood gas study, and radiologists typically diagnose the disease by reading the X-ray. 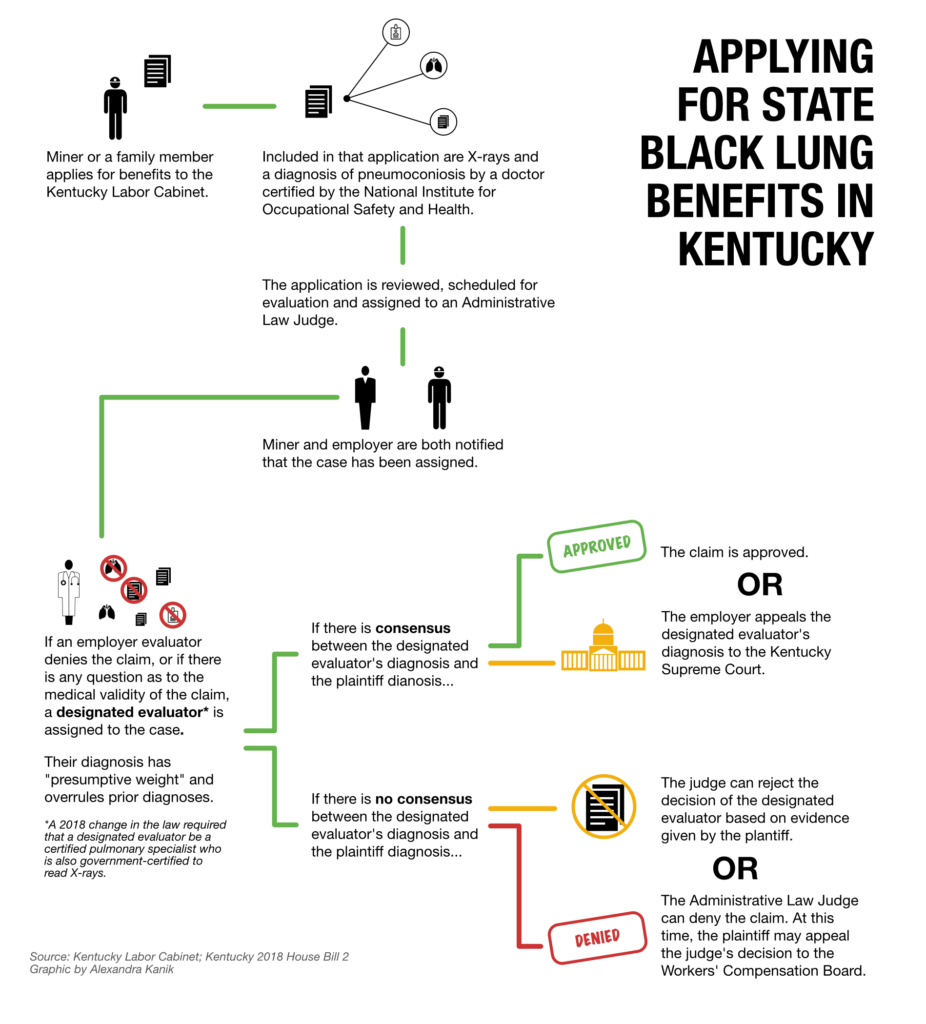 Once the claim is filed, the miner’s most recent employer’s insurance company can request to have an X-ray read by a physician of their choosing, and the judge overseeing the case can require a third reading from a “designated evaluator,” whose analysis is presumed to be correct unless there is overwhelming evidence to the contrary.

In 2018 Kentucky lawmakers overhauled many aspects of the state’s workers’ compensation system in legislation known as House Bill 2. One provision of that bill prevented radiologists, whose expertise is in analyzing X-rays, from serving as designated evaluators in state claims, and said only certain pulmonologists could serve in that role. Only two pulmonologists in the state opted to serve in the new system: Dr. Bruce Broudy and Dr. Byron Westerfield. Both have reputations for being more sympathetic to industry.

The designated evaluator who read Stanley’s X-ray, Dr. Broudy of the Lexington Clinic, disagreed with the three other physicians involved in Stanley’s case. Dr. Broudy said the miner had a simpler form of the disease, and would therefore be entitled to less money.

“Unfortunately, that’s not uncommon in these cases,” said Tom Moak, a Prestonsburg attorney representing Stanley in his benefits case. “Somebody like Dr. Broudy, who has a history of working for coal companies, generally is considered more conservative. He almost always finds that somebody doesn’t have any black lung, or has one of the lower levels of black lung.” 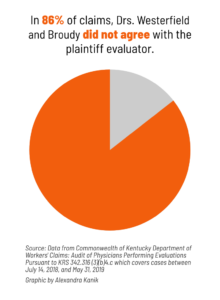 Data from Kentucky’s Department of Workers’ Claims showed that taken together, Drs. Broudy and Westerfield disagreed with the initial diagnosis in 85.5 percent of cases they examined. Both pulmonologists declined to be interviewed for this story.

Dr. Broudy told Moak in a recent deposition that in his 40 years of work in black lung cases, 90 to 95 percent of the time he had been working for coal companies or their insurance firms.

The changes to state law have not resulted in a backlog of cases, as opponents had feared. But state records indicate that the restrictions have had an impact on the share of miners who win their claims. The ReSource found that 161 benefits claims were filed but only 16 coal miners were awarded black lung benefits in 2019. That’s the lowest ratio of claims awarded to claims dismissed in the past seven years. (It is important to note, though, that not all claims are resolved in the same calendar year in which they’re filed.)

Black lung disease can be difficult to diagnose because it can manifest in a number of different ways, said Virginia-based radiologist Kathy DePonte, a nationally recognized expert in diagnosing black lung. “But you can look at the radiograph and, with enough experience, make a fairly confident diagnosis.”

DePonte looks for what are called opacities on the X-ray. “What’s the size, shape, density of those opacities? Are they symmetric, are they asymmetric?” Multiple small opacities may masquerade as one large one; thinning edges of an opacity may make it appear smaller than it really is. Black lung is easy to misdiagnose as other diseases because it can look so many different ways in an image.

“When you’re looking at a radiograph, it’s what do you expect to see, what do you want to see,” DePonte said.

The combination of the skill it takes to look for a “polar bear in a snow storm” and the perspective an individual reader takes toward black lung means that over time, physicians develop a reputation for reading more or less liberally. But with the right training, DePonte said, both pulmonologists and radiologists can and do adequately diagnose black lung.

DePonte was baffled by Kentucky lawmakers’ decision in 2018 to block radiologists from reading X-rays. “My first thought is maybe it was a political decision.”

Introduced by state Rep. Adam Koenig, a Kenton Co. Republican, the black lung provisions in HB 2 made Kentucky the only state to prevent radiologists from reading X-rays in state claims.

Republican state Sen. Phillip Wheeler, a lawyer who represents black lung claimants, alleged the bill was intended to limit the number of miners who won benefits. He referred to the new law as the “Brandon Crum Exclusion Bill.”

A radiologist based in Pikeville, Crum is certified by the National Institute for Occupational Safety and Health to diagnose black lung. In 2016, Crum alerted researchers at NIOSH to the extraordinary levels of complicated black lung, or PMF, he was identifying in his clinic. He later worked with NIOSH on a 2016 study confirming a cluster of black lung in central Appalachian coal communities. Follow-up research found that one in five experienced central Appalachian coal miners would develop some form of the disease.

The law change came at a time when struggling coal companies were laying off a record number of workers and when more miners were applying for and winning benefits in state cases. The bill had strong support from the coal industry, including Kentucky’s Coal Association.

The professional associations for both pulmonologists and radiologists disavowed the provision in the 2018 law and have called for its repeal. Speaking on behalf of the American Thoracic Society, which represents over 1,500 pulmonologists, Dr. Robert Cohen of the University of Illinois at Chicago told NPR in 2018 that the Kentucky law was “ill-considered” and a “disservice to miners.”

The issue has caught the attention of Kentucky state Rep. Angie Hatton, a Democrat who represents Letcher Co. in eastern Kentucky. Hatton has introduced a bill in the 2020 legislative session that would essentially undo the provision that excluded Crum, DePonte and other radiologists.

The bill has the support of Kentucky Gov. Andy Beshear, a Democrat, who has called attention to the geographic challenges posed by the restrictions in the 2018 law. “Almost all of our coal miners live in western and eastern Kentucky — the two sides of our state. But in order to get the diagnosis they need to receive treatment for a very difficult disease, guess where they have to go? To Lexington or to Louisville. I think that’s wrong,” Beshear said. 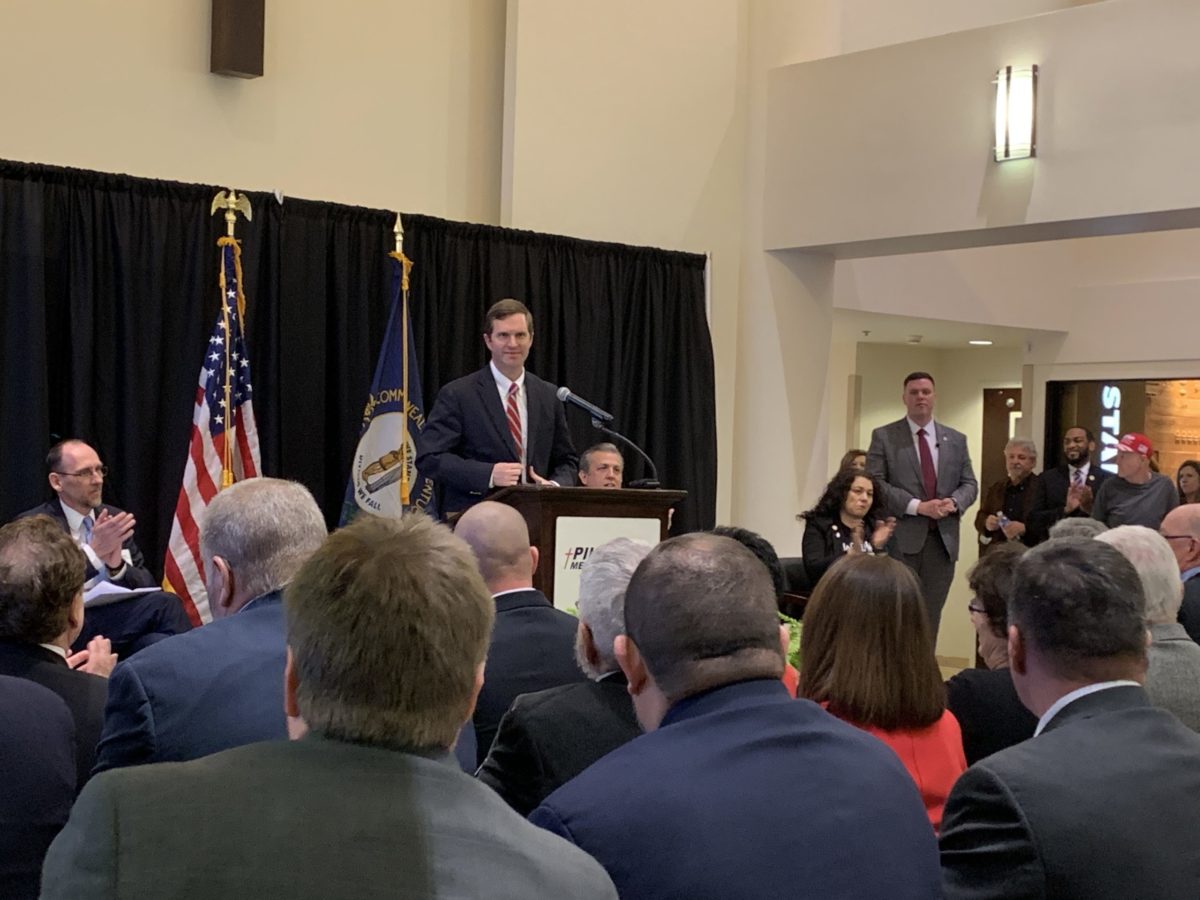 Kentucky Gov. Andy Beshear voiced his support for reform of the black lung law at a February 14 event in Pikeville.

Sen. Wheeler has suggested he may introduce a similar bill in the Senate, but only if Hatton’s bill does well in the House. And that depends on the chair of the House Economic Development & Workforce Investment Committee, Rep. Russell Webber, Republican of Shepherdsville.

“I have spoken with Chairman Webber and with the sponsor of the original reform bill, Representative Koenig. I am presenting them with more evidence every time I speak with them, gathering evidence from the miners themselves, from the health care facilities here, and from the Department of Workers’ Claims,” Hatton said. “And I think that once I give them enough evidence, that they’re going to give me a hearing.”

Rep. Webber has not indicated he will bring Hatton’s bill up for a hearing.

The road ahead looks difficult for coal miner Lynn Stanley, too. He may be working with attorney Tom Moak for years as his state and federal black lung claims wind through parallel systems. (According to the U.S. Department of Labor, 32 percent of Kentucky miners who file black lung claims win benefits in the federal system.) If he wins his case, the insurance company representing his most recent employer might appeal, which could drag the case on even longer.

But Stanley is patient, and he’s understanding.

“I’m not putting the coal companies down, I realize they’re in a fight for survival right now,” he said. But, he added, “If they harm an individual and that individual can prove that he has been harmed by that dust, then he should be compensated for it.”