As the economic fallout from the coronavirus continues to reshape our lives, small-town business owners are worried about the future. Whitesburg, Kentucky —  a town already struggling from the decline in the coal industry — is grappling with a new and serious challenge as the effort to contain the disease brings deep economic pain.

The Appalachian Regional Commission still considers Letcher County, where Whitesburg is located, and many of the surrounding counties, “distressed” because of high unemployment, high poverty rates, and low per-capita income. Much of that distress came from a decline in coal jobs: There were fewer than 100 coal miners in Letcher County in 2017, down from 13,000 in 2009.

Despite the challenges, Whitesburg is a fabulous town. I know because I live there. It’s got lots of public art. There’s a great walking trail right along the river, a community kitchen, more live music than you could shake a stick at. And it’s full of people who are passionate about building a diverse and sustainable community, who have worked diligently for years to create a thriving downtown.

All of that is to say, Whitesburg is fragile. And the economic fallout from the coronavirus is likely to destabilize this place, and places like it, harder and faster than it might in larger cities.

To see how the ban is going to impact local restaurants, I walk down the street to Heritage Kitchen, my go-to spot for lunch. 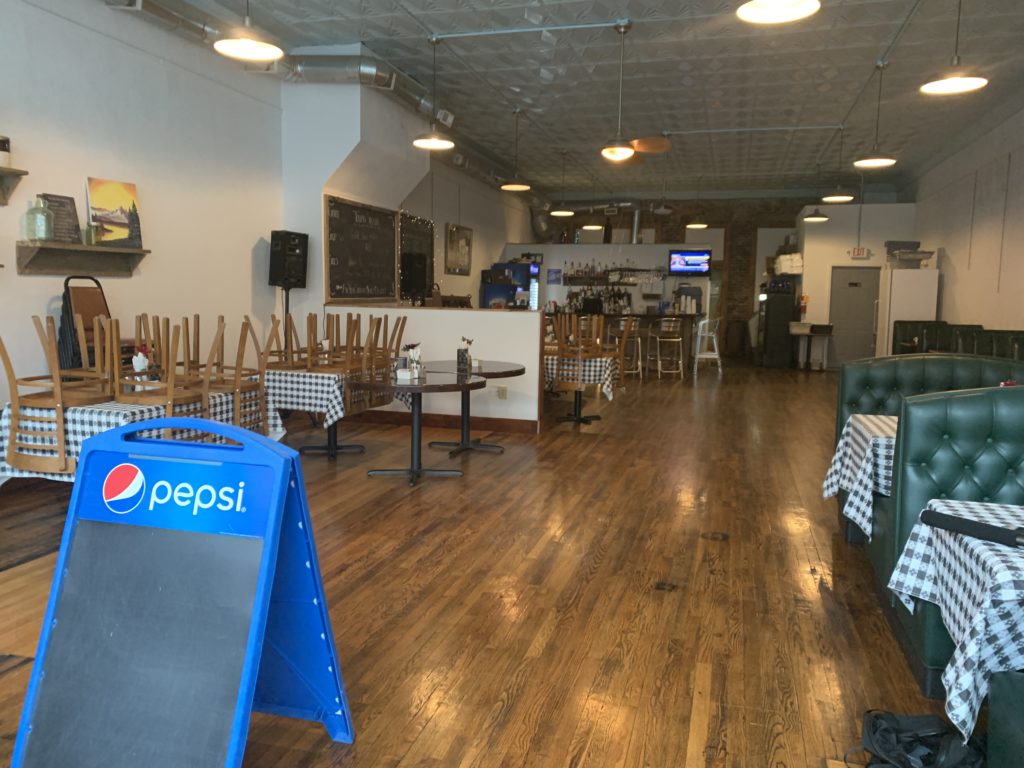 Heritage Kitchen was empty Tuesday as staff reacted to a ban on dine-in service.

It was eerily quiet. Chairs were up on tables. Server Amber Bailey fixes herself a cup of coffee and we sit six feet apart to talk about what this meant for her.

“I’m one of the lucky ones,” Bailey says. “My boyfriend has a full-time job. But I have a lot of friends who work in the restaurant industry, you know, waitresses and bartenders, and they don’t have anybody else. So I’m more worried for them than I am for myself.”

Brad Shepherd owns Heritage. “Our primary business has always been the dine-in,” he says. “We’ve always done some take-out and delivery, but that’s all supplemental to the dine-in.”

Shepherd plans to stay open for take-out and delivery for one month and re-evaluate, but he’s worried if the crisis goes on longer than that, he’ll have to shut down. Even by the end of that month, he says, he’ll be dipping into his own savings to keep the restaurant afloat. Just like Amber Bailey, Shepherd isn’t just worried for himself.

“It really does take all of us to create a sense of a vibrant business atmosphere,” he said. “So losing any one of us permanently would be a devastating blow.”

“I don’t foresee every business making it through this,” said Alison Davis, Executive Director of the Community and Economic Development Initiative of Kentucky at the University of Kentucky. Her organization has helped rural coal-reliant communities transition away from fossil fuels, and prepare for crises like natural disasters. “When we’ve tried to prepare communities to be resilient after disasters, this is not the kind of disaster we’ve tried to prepare communities for,” Davis says.

Uncertainty remains regarding how or whether the coronavirus crisis will overwhelm hospitals, and what the economic fallout will be from extended forced closures of many American industries. But most projections look serious. A recent white paper from the MITRE Corp., a not-for-profit company that advises the federal government on national security matters, warned that the rapid rate of new cases in the U.S. could require 90 percent isolation of the public in order to stop the spread of the virus.

Still, Davis says, rural communities have real strengths they can build on right now. “It is the local people right now who are determining their chance of success post this disease,” she said. “I get excited because I know some of these communities, they have really rallied. It is, we have been together, we know each other, we know our strengths, we know our formal and informal leaders. We’re going to figure something out.”

Back at Heritage Kitchen, server Amber Bailey is already thinking about how to support her community. “If we end up shutting our doors here, then I can help some of my other friends who may have little ones where their daycares are gone.”

Projections show unemployment in rural Kentucky already skyrocketing, and it’s only going to get worse: According to the Kentucky Center for Investigative Reporting, the Cabinet for Education and Workforce Development received about 23,600 unemployment claims in just three days, up from about 2,000 in a typical week.

Bailey still has hours. And she still knows exactly how I like my burger when I call to order takeout. But across the street, downtown pub Streetside has laid off its servers indefinitely.