Donate Now!
The Pandemic Primary: How Will We Vote In The Age Of Coronavirus?

The Pandemic Primary: How Will We Vote In The Age Of Coronavirus?

With concerns mounting about how to conduct elections during a pandemic, states across the Ohio Valley are postponing their primary election dates and, in some cases, expanding access to voting by mail in order to allow people to cast ballots safely. But the implementation of last-minute changes is straining politics and the capacity of local elections officials region-wide.

Ohio postponed its election from March 17 to April 28, giving its election officials the smallest window in which to adjust their plans. West Virginia delayed until June 9, and Kentucky, which had planned to hold its primary May 19, moved its primary five weeks later to June 23.

Races range from the presidential primary, to U.S. Representatives and Senators — including Majority Leader Mitch McConnell of Kentucky — down to state and local officials.

“Voting is obviously the bedrock of our republic in terms of how Americans are able to influence the laws under which they live,” said Jack Noland, a research manager with the bipartisan group RepresentUs which supports mail-in voting. “Ultimately, one of the upshots of this will be exposing more voters than ever before to the value, ease and opportunity of voting at home.”

But the move to expand mail-in balloting also opens a partisan divide about how we should vote during a crisis.

In addition to postponing its primary election, Ohio eliminated in-person voting except for people with disabilities or other special needs. All others who wish to cast a ballot in the primary must request a mail-in ballot from their county board of elections, receive the ballot by mail, and get it to the same board either postmarked by April 27 or hand-delivered by April 28.

“We were completely prepared for the election,” said Debbie Quivey, the director of the Athens County, Ohio, board of elections. Her team of seven learned that in-person elections would be eliminated at 3 p.m. on March 16, just hours before voters were to go to the polls. That left her team of seven, most of them elderly women, just weeks to drastically scale up their voting-by-mail procedures so that all of the county’s 65,000 residents had the opportunity to cast their ballot.

“I’ll be honest, I was… I don’t know if I’d call it shock or not, but it took a while for us to think about, okay, how we’re going to handle this,” she said.

The team, some full-time staff and some volunteers, receive about 300 requests for an absentee ballot each day, by phone, by mail and from in-person drop-offs at a table next door to their office. The requests then get digitized and sorted by political party (Quivey’s kept up at night by the thought of a Republican receiving a Democrat’s ballot by mistake, she says, or vice versa), then a team of ladies downstairs stuffs envelopes with the official ballot and return postage. The envelopes are sealed, addressed and stamped, and, mouth covered in a homemade purple mask, Quivey delivers batches of ballots to the post office by 4:30 each afternoon.

It’s a lot of overtime and a lot of extra worry, Quivey says, but she believes her team is on track to get absentee ballots to all Athens County residents who want them.

West Virginia is one of seventeen states that allow residents to request an absentee ballot, also known as a mail-in ballot, for one of several specific reasons, which vary by state but typically include illness, disability, work-related out-of state travel, or incarceration before conviction.

To accommodate public health concerns over the coronavirus, Secretary of State Mac Warner allowed all voters to access absentee ballots. This came after Attorney General Patrick Morrisey found that the Secretary had broad powers to alter the method of conducting elections during states of emergency.

Unlike in Ohio, where voters must request an application for an absentee ballot, West Virginia Secretary of State Mac Warner announced March 26 that every one of the state’s roughly 1.2 million registered voters would receive their application automatically.

Kentucky is also an excuse-required state, and despite agreement between Democratic Gov. Andy Beshear and Republican Secretary of State Mike Adams, there are currently no firm plans to expand access to absentee ballots due to the coronavirus. That makes Kentucky one of just eight states to have taken no action to increase voting access during the coronavirus, according to anti-corruption group RepresentUs.

Kentucky’s system for voting in the primary was complicated by a dispute between Beshear and the Republican-controlled legislature.

Beshear vetoed Monday language in an omnibus spending bill that would have ceded to the Secretary of State some of his power to alter the method by which Kentuckians vote during a state of emergency.

“I know there’s going to be an argument about whether or not the legislature should get to add this piece, or whether I’m a bad teammate by vetoing a new part of the law that takes authority from the governor,” Beshear said in a Tuesday press briefing. “I just believe that given the coronavirus, I need to have the final decision, just like has been the law forever.”

The legislature overrode Beshear’s veto Wednesday; the governor will now need approval from Republican Secretary of State Mike Adams before he can expand mail-in voting.

The State Board of Elections, the Secretary of State, and the governor’s office are in discussion over how or whether to expand voting by mail in the state’s June 23 primary.

Scott pointed to Wisconsin, where executive orders delaying the vote and instituting voting by mail were overruled in last-minute court decisions, resulting in in-person voting proceeding despite a stay-at-home order. The move endangered poll workers and Wisconsin voters alike, and was panned as a disaster in the national press.

“We don’t want that for Kentucky,” Scott continued, “because right now we can’t honestly say where we’ll be come June 23. We don’t really know.” 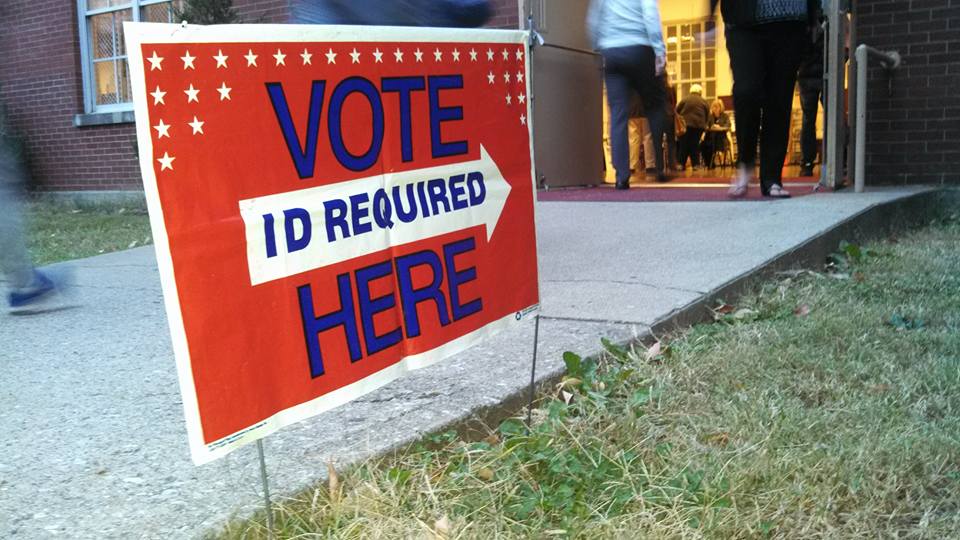 A Kentucky polling place during the 2016 election.

Limited evidence suggests that increasing access to voting by mail results in a boost to voter turnout, leading some Republicans to argue that the practice would benefit Democrats. In a March appearance on Fox News President Donald Trump said the increased turnout would mean “levels of voting that, if you ever agreed to it, you’d never have a Republican elected in this country again.”

Thomas Massie, a Republican U.S. Representative from Kentucky, opined recently that universal voting by mail would “be the end of our republic as we know it.”

West Virginia Republican Gov. Jim Justice has also criticized vote-by-mail efforts, saying Wednesday, “There is always suspect with absentee balloting, you know, from a corruption standpoint, and I’m very very hopeful that on June 9 we’ll be able to go to the polls and you’ll be able to exercise your right.”

Election experts say charges of increased fraud among mail-in ballots are unfounded, with data from the five states that have switched to automatically mailing all voters an absentee ballot showing that rates of voter fraud remain low as use of mail-in ballots increases. Oregon has mailed-out more than 100 million ballots since 2000, with about a dozen cases of proven fraud.

“There are concerns in some camps about the potential for voter fraud, the idea being that if you’re not keeping a close eye on the actual voting process, it introduces the opportunity for fraud. But thankfully the states that have really pioneered ways to make sure it is just as safe and secure as other forms of voting,” said Jack Noland, a research manager with RepresentUs. “And so there are elements of security that are in place now, that may just need to be bolstered or enhanced to meet the increased demand.”

The politicized national conversation obscures a richer, more bipartisan history of voting by mail, including in the Ohio Valley: Kentucky, Ohio and West Virginia all have Republican Secretaries of State who have indicated support for voting by mail in the pandemic.

“Looking through the history of expanded vote-from-home options, it has often been Republican election officials who have pushed for reforms on efficiency grounds, and making sure the voter rolls are secure and accurate,” said Noland.

Kentucky Secretary of State Mike Adams campaigned against early voting and voting by mail. But despite clashes with Beshear over authority to decide elections, Adams has accepted that changes may be necessary to accommodate the pandemic. His office is working with the governor’s to iron out the details of how the election may work.

“You can’t just turn on a dime and redo your entire election system overnight,” he told the Ohio Valley ReSource Thursday, recalling the words of another election official. “You don’t have enough time for the training, you don’t necessarily have the hardware and software that you need.”

One key challenge facing election officials will be making sure the specific ballot reaches the right person. Two people in the same zip code or even on the same street may have different ballots if they are represented by different county delegates or school board members.

“There’s probably an administrative load that has to be solved,” said Dr. Don S. Inbody, retired U.S. Navy Captain and an expert in military absentee voting. “Some larger counties probably have the staffing to handle that. Small counties who might have three or four people handling their ballots will probably be overwhelmed.”

That may mean we won’t have election results as quickly as we expect, Inbody said.

“Some of the decisions that Kentucky makes today with the primary, they’ll probably need to make keeping November in mind,” said Trey Grayson, who served as Kentucky’s Secretary of State from 2004 to 2011.

Modelling suggests that extreme social distancing will have relaxed by November, but the virus will likely still be circulating, and no vaccine will be widely available.

Kentucky must also grapple with a new law requiring voters to have a photo ID. The legislature overruled Gov. Beshear’s veto of the law in the final hours of the legislative session and the law goes into effect for the November general election. The difficulty with the new law, of course, is that it’s impossible to get a photo ID right now, because government offices are closed.