Debby Dulworth has a lot of conversations with her cattle each day. She swings open a gate, driving the herd with repeated calls and the Hereford cattle respond in kind with groans and snorts.

“They talk to me,” Dulworth said with a laugh, as the cows come bounding out into a fresh field of Kentucky fescue and buttercups. She’s been corralling them from pasture to pasture on her farm for decades near Monkey’s Eyebrow, Kentucky, nestled in a bend of the Ohio River. 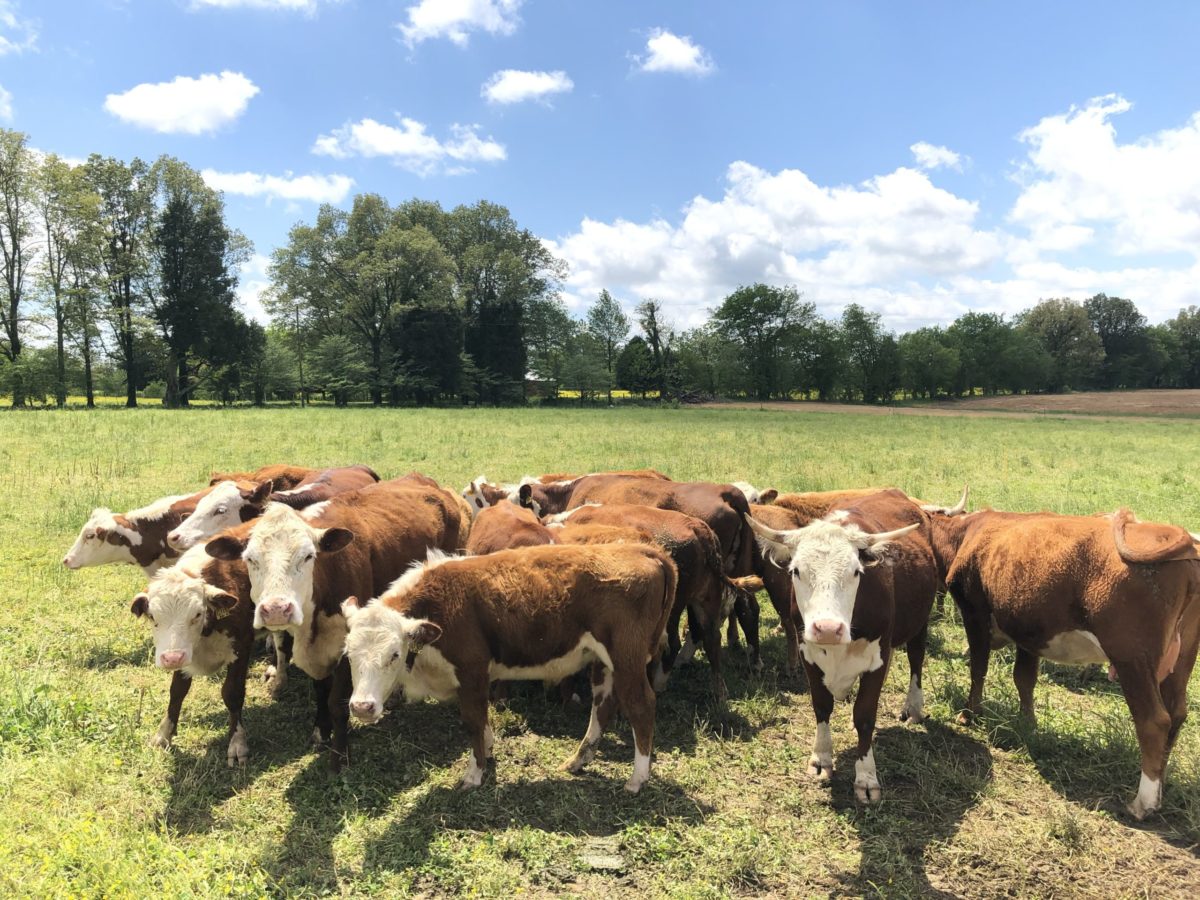 Cattle farmers are seeing increased local demand amid the pandemic.

Most of the time, they move at her call. The more stubborn ones she herds with the threat of an electric wire she slowly drags through the field. The wire isn’t hot usually, but the cows don’t know that.

“They learn very quickly. They don’t like being shocked,” Dulworth said. “They’re pretty smart that way. They’re smarter than people that way.”

Dulworth and her husband sell their grass-fed beef throughout west Kentucky, much of it through word of mouth. They were worried about sales after demand last year had dropped off. Then pandemic hit.

“People started calling in, and actually it started in March and it really picked up throughout April, until now, we have way more customers than we can find processors to take,” she said.

A couple calls a month of inquiries turned into several a day — many new customers — from people wanting orders of their beef. And while they were taking new orders, they had trouble trying to meet that new demand.

Small meat processors in the region that would normally take their cattle were now telling Dulworth they didn’t have available appointments until December, or even April of next year. Other livestock farmers are also seeing a spike in demand and are trying to get their cattle processed to fulfill the new orders.

Across the Ohio Valley, farmers that sell locally are seeing skyrocketing interest in the food they offer as the pandemic brings fears of food shortages in grocery stores, slowed production in meatpacking plants caused by COVID-19 outbreaks, and a radically different grocery store experience.

Dulworth and other farmers see a moment of opportunity  to show consumers a new way to get their food locally, a way that she believes can benefit both the buyers and the local suppliers. 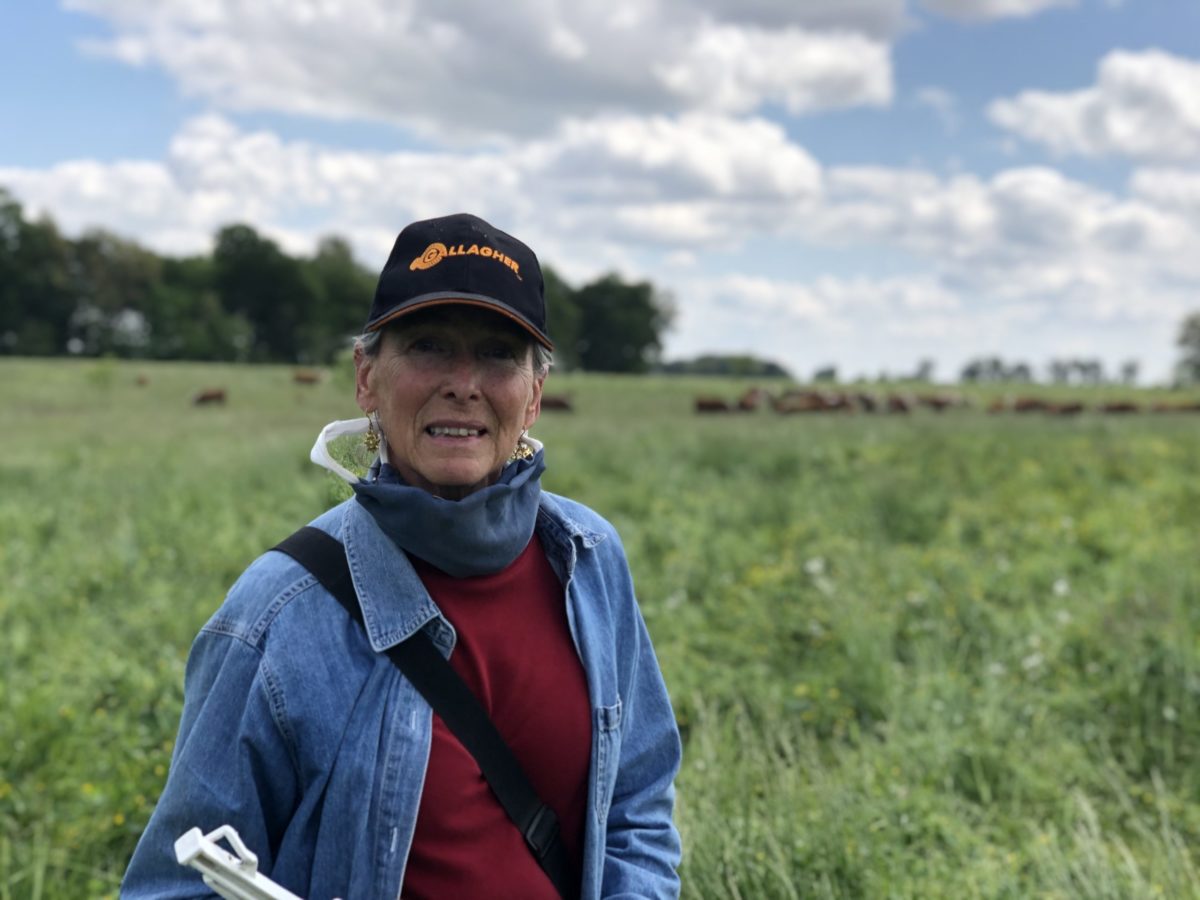 Debby Dulworth on her cattle farm near Money’s Eyebrow, KY.

For weeks on end beginning in March, Fritz Boettner was getting little sleep.

Boettner runs the Turnrow Appalachian Farm Collective in West Virginia, a cooperative that brings together produce and livestock farmers throughout the state and region to supply local food to restaurants, schools, and individuals.

While orders from restaurants had halted due to coronavirus-related shutdowns, demand from individuals was booming, from about $5,000 per week during normal circumstances to nearly $30,000 a week.

To keep up, he was spending long days just to unload produce being shipped from multiple local farms, re-package it to customers, and then reload to be sent to consumers.

Other outlets offering Appalachian produce report a similar surge. The Chesterhill Produce Auction in southeast Ohio has seen about 60 new customers in the past two weeks looking for the ramps, asparagus, green onions, and other offerings, said Jessica Dotson, who helps run operations at the auction. During normal times last year, the auction would see only about 10 new customers a week.

“A lot of people are coming out and buying the vegetable stocks to grow their own gardens because of the food scarcity,” Dotson said. “If they can provide for their self or get it just down the road … it’s definitely a lot better than having to rely on a big store.”

Boettner said his cooperative is a new discovery for many looking for food alternatives as shortages and higher prices affect grocery stores, largely connected to COVID-19 outbreaks in meatpacking plants. Instead of walking into a grocery store, people can pick up food packaged together in locations throughout the state.

“No one wants to go to the grocery store. And then you look at the food system in general, at a national level … and it’s scary. Meat plants shutting down because everybody has COVID,” Boettner said. “How does that affect the meat I’m eating? And then they go to the store, and it’s not there. So your traditional food systems are a little bit scary right now.”

It’s not clear if this new interest in local agriculture will last, especially given the economic uncertainty that lies ahead. But Boettner said he thinks the pandemic could bring a significant shift.

“Now, things could change if we head into a deep depression, or where no one has jobs and money in order to pay for it,” he said. “We’re not all of a sudden gonna be able to pivot and feed the entire state of West Virginia within Turnrow, it’s impossible.”

While he doesn’t think substantial change will come in the next few years, this pandemic could be a turning point to build upon small changes over the course of future decades.

“It’s still a long game,” Boettner said. “Is it a pivot point to where we can start to head that direction into a more sustainable food system?”

Boettner and other local farmers hope by introducing new people to locally-sourced agriculture they can show consumers the benefits of knowing where their food comes from and the community benefits of keeping the profits local.

Debby Dulworth and her husband changed their business model in 2003 to sell their cattle directly to people in the region out of financial necessity, compared to sending cattle to feedlots. In the late 1990’s, they were more than $300,000 in debt after years of stagnant prices for their feedlot cattle and the purchase of a local feed mill that flopped.

“We’re at the bottom of the food chain. And by keeping them here and doing all that work ourselves, we got to take all those profits and keep them which helped us get out of debt,” Dulworth said. “It’s not an exorbitant living, but it’s a good living.”

Another beef cattle farmer near Lewisburg, West Virginia, also sees this renewed interest as an opportunity to put more investment back in local agriculture, in a state where investment in fossil fuel industries has dominated the state.

Jennifer “Tootie” Jones said her family farm has also seen sales spike the past few months, to the point where they’ve had to hire a person to answer the phone and manage online orders.

With those in the state trying to make local agriculture a sustainable part of the regional economy, she believes the federal government and state could do more to invest in small-scale agriculture.

She said even as she’s hired new employees in the past month, she still struggles with banks and financing for her farm.

“Look what we have here, and look at how much more money we could probably bring into our banks, bring into our businesses, loan opportunities,” Jones said. “But it’s not coal, and it’s not timber, and not stone. And I just don’t get it, because it’s the thing we all need the most — food.”