The first day of classes at Ohio University is subdued this year. A few students walk across the Athens, Ohio, campus wearing masks. A group sits, socially distanced, on blankets on the green.

The university opted to bring back roughly 2,000 students to campus for the first weeks of the semester due to coronavirus concerns.

The remaining 10,000 or so students are learning remotely in Phase 1 of the school’s reopening plan. They’ll wait until September 8 to find out if they will be eligible to return in Phase 2.

In an interview with WOUB Public Media, Emeritus Distinguished Economic Professor Richard Vedder said the school will feel the absence of students, as will Athens. Without the students that normally more than double the town’s population there will be a lack of  both patrons and workers for businesses in town.

A lot of the money college towns receive from the state and local governments comes from taxation. And if a large portion of the population is gone, so is the money.

“The government is going to have a big revenue shortfall,” Vedder said. “And it’s probably unrealistic to expect the federal government to make most of that up.”

According to him, local governments really have just two options: make cuts or raise taxes. And both come with negative consequences.

College towns across the Ohio Valley face the same economic uncertainty. Revenues from students, events and employees are not going to come in like they did before the pandemic.

With a capacity of 60,000, game days at Milan Puskar Stadium in Morgantown, West Virginia, can bring crowds cheering on West Virginia University’s football team larger than the most populous city in the state. 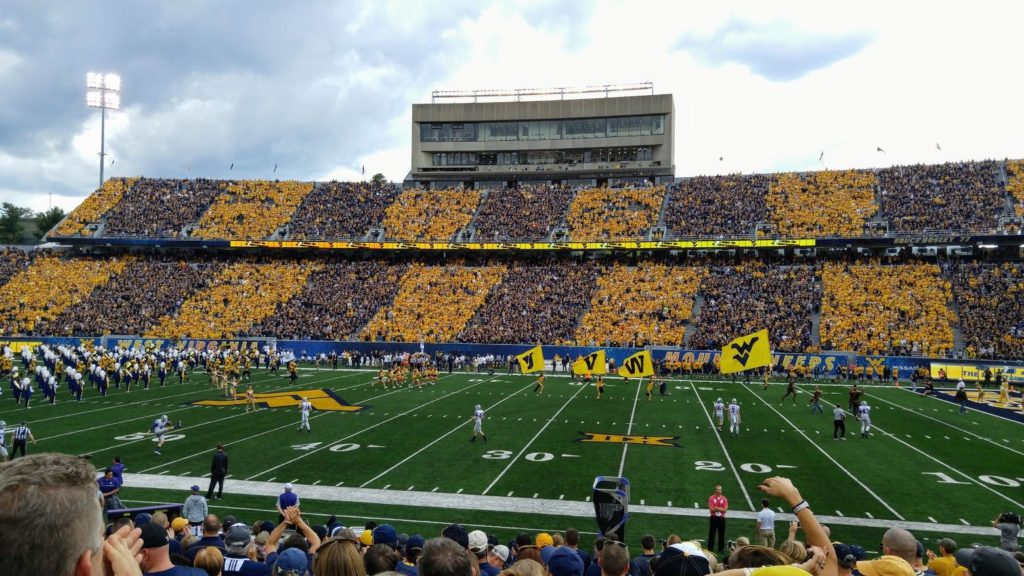 Milan Puskar stadium in Morgantown, West Virginia during a 2016 game.

But when the Mountaineers take the field for their home opener against Eastern Kentucky University on September 12 attendance will be limited to essential game operations personnel and families of the team’s players and staff.

The Athletic Department will likely reduce the capacity for the remaining home games against Big XII opponents.

John Deskins runs the Bureau of Business and Economic Research at WVU. He said the loss of fans will be felt by the local economy beyond the stadium.

“If out of state people come in and spend a million dollars on hotels and restaurants and bars that directly is part of the economy. But also that means more hours for the employees, more profits for owners,” he said.  “They’re going to spend that money in turn in the economy again.”

The loss will certainly leave a hole in the budgets of Morgantown and beyond.

But Deskins notes that it could be an equal financial risk to bring 50 to 60 thousand people together during a pandemic. Especially in one of the state’s potential hotspots for coronavirus spread.

“I think that the calculation is that the loss associated with trimming back the capacity with the game is less severe than potential loss that would be associated with another outbreak,” he said.

Funding from the federal government’s CARES Act might be able to mitigate the loss of revenue. The $2.2 trillion economic stimulus bill provided $339.8 billion to state and local governments.

College towns will also have to deal with a loss of jobs if their institutions continue to lose funding.

Ohio University already faced millions of dollars in financial problems before the pandemic. COVID-19 pushed those issues further and resulted in layoffs that began in May with the school eliminating 139 AFSCME union positions.

Those employees and supporters participated in drive-by protests where they honked their horns, tied cans to their bumpers and wrote messages like “Save OUr Jobs” on their cars.

A list of demands was also taped to the door of Cutler Hall, which houses the offices of the president, the provost, and other senior administrative officers.

They asked that the job cut be reversed, all future personnel changes be frozen and for a seat at the table to discuss budget solutions.

But the university faced more cuts to higher education from the state, which reduced the General Revenue Fund by 776 million dollars for the last two months of last fiscal year.

That may become the baseline in a flat budget for this fiscal year.

Ohio University claimed they lost $22.8 million due to COVID-19.

Then more layoffs at the school followed, with the school reducing the total workforce by around seven percent.

Union workers at Ohio University and supporters demand job cuts be reversed at a protest in June.

And more layoffs could be possible depending on future economic fallout and lower enrollment numbers due to the pandemic.

While unemployment compensation is important for those laid off, it doesn’t help with the loss of income tax Athens faces.

“If you get unemployment insurance, you do pay state income taxes on it, but the local municipal income taxes don’t apply to it,” Wendy Patton, Senior Project Director for the left-leaning Policy Matters Ohio said. While unemployment helps families who need to pay their bills it “doesn’t help the cities in a world of hurt”.

Patton argued cuts to the public sector only slows economic recovery while the private sector is down.

And instead of using cuts, she said Ohio should have instead dipped into its roughly $2.7 billion rainy day fund.

Ohio Lt. Gov. Jon Husted claimed that fund would not fully cover the economic fallout of the pandemic.

Gov. Mike DeWine committed to using the fund to avoid future cuts, but hasn’t been specific on how the state will use it.

As college towns around the Ohio Valley face massive revenue losses, Patton said she wants federal and state governments to use every tool they have to help them avoid more job losses. That includes CARES Act funding and rainy day funds.

“If it’s not raining now, I don’t know what you consider to be a storm.”