Robert E. Murray, the former CEO and president of the now-bankrupt Murray Energy, has filed an application with the U.S. Department of Labor for black lung benefits. For years, Murray and his company fought against federal mine safety regulations aimed at reducing the debilitating disease.

“I founded the company and created 8,000 jobs there until the move to end coal use. I am still chairman of the board,” he wrote on a Labor Department form that initiated his claim obtained by the Ohio Valley ReSource. “We’re in bankruptcy, and due to my health could not handle the president and CEO job any longer.”

According to sources, Murray’s claim is still in the initial stages and is being evaluated to determine the party potentially responsible for paying out the associated benefits. The Labor Department is required to determine a liable party before an initial ruling can be made on entitlement to benefits. If Murray’s claim were to go before an administrative law judge, some aspects of the claim would become a matter of public record.

The Ohio Valley ReSource confirmed the authenticity of Murray’s claim documents by inputting associated information — including his last name, birthdate and a case ID number — into an online portal maintained by the Labor Department.

In his claim, Murray, who is now 80 years old, writes that he is heavily dependent on the oxygen tank he is frequently seen using, and is “near death.”

North American Coal Corporation is named as one potentially liable party in Murray’s claim for the benefits. According to documents associated with his claim, he states that he was employed by the company from May 1957 to October 1987 — where he ascended through its ranks, first as a miner before taking on the role of president.

Later, he served as president and operator of Ohio Valley Resources, Inc. and a subsidiary from 1988 to 2001. He founded Murray Energy in 1988.

He states in his claim for benefits that he worked underground while supervising operations throughout the years.

“During my 63 years working in underground coal mines, I worked 16 years every day at the mining face underground and went underground every week until I was age 75,” Murray wrote in his claim.

Reached by phone, Murray declined an on-the-record interview for this story. Murray said he has black lung from working in underground mines and is entitled to benefits. Additionally, he disputed that he ever fought against regulations to quell the disease or fought miners from receiving benefits.

Murray also threatened to file a lawsuit if a story was published that indicated he had fought federal regulations and benefits.

But Murray told NPR in October 2019 that he had a lung disease that was not caused by working underground in mines.

“It’s idiopathic pulmonary fibrosis. IPF, and it is not related to my work in the industry. They’ve checked for that,” Murray told NPR. “And it’s not — has anything to do with working in the coal mines, which I did for 17 years underground every day. And until I was 76, I went underground twice a week.” 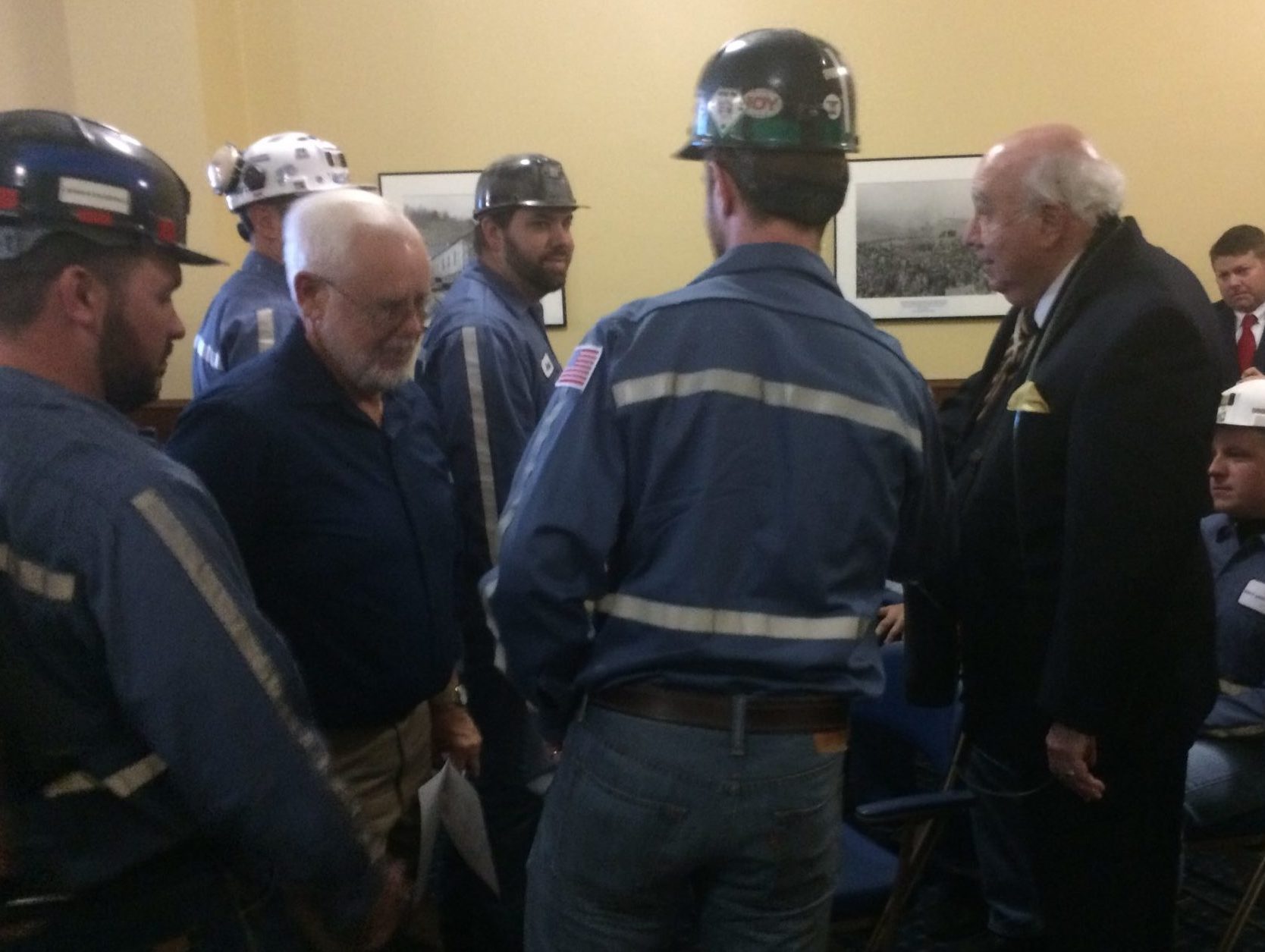 Like other coal operators, Murray’s companies have disputed the claims made by miners who seek black lung benefits. The coal magnate, who for decades ran the largest privately owned underground coal mining company in the United States, has also been at the forefront of combatting federal regulations that attempt to reduce black lung, an incurable and ultimately fatal lung disease caused by exposure to coal and rock dust.

In 2014, Murray Energy spearheaded a lawsuit against the Obama administration over a federal rule that strengthened control of coal dust in mines.

The Obama-era standard reduced the acceptable amount of coal dust exposure for miners, increased the frequency of dust sampling, and required coal operators to take immediate action when dust levels are high.

The reforms were the first in more than four decades to tighten exposure standards to coal dust and came at a time that evidence was mounting that Appalachia was seeing a deadly resurgence in the most severe form of black lung, after reaching historic lows in the 1990s.

“It’s ironic that Murray’s company fought hard to block the 2014 respirable coal dust rule we put in place to prevent the black lung disease,” said Joe Main, who served as assistant secretary of the Mine Safety and Health Administration under President Barack Obama.

MSHA, as it is known, is the agency within the Labor Department tasked with implementing and enforcing mine safety rules, including those aimed at reducing black lung.

Murray Energy’s lawsuit claimed that adhering to the new rule would have been virtually unachievable with available technology and would cost the industry billions. Murray’s suit failed, but Bob Murray tried again to block implementation of the dust rule, this time by influencing the incoming administration of President Donald Trump.

Murray, a staunch Trump supporter, has been a major player in shaping the current administration’s energy policy agenda and has funded groups that deny the existence of climate change. Early in Trump’s term, the coal magnate delivered a detailed action plan aimed at helping the declining industry. Among the requests: overhaul the “bloated” MSHA and “revise the arbitrary coal mine dust regulation” which Murray claimed would cost the industry “thousands of jobs.”

The coal industry’s biggest players and lobbyists, including the National Mining Association, have fought tighter regulations. Wes Addington, executive director of the Appalachian Citizens’ Law Center, a nonprofit law firm that has for years represented miners in black lung benefits cases, said Murray was at the forefront of that fight.

“Today, in 2020, we’re seeing more miners with more advanced black lung than the country has ever seen. And yet, the industry over the past 10 to 20 years, has consistently fought against any regulation that would try to limit the amount of dust that miners breathe,” Addington said. “Murray Energy has been part of that fight, along with a number of the largest coal companies in the country.”

To qualify for black lung benefits, miners must prove both that they have the debilitating disease and that they are totally disabled due at least in part to a breathing impairment caused by black lung.

The diagnosis is usually done through X-rays and other tests and certified by a medical professional. To get federal benefits, a miner will first assemble and submit a claim to the Labor Department. The agency will review the claim and make a determination as to whether there is substantial evidence to prove both the presence of the disease and that it has disabled the miner. If the claim is approved, the federal government will begin paying out medical benefits, also called interim benefits, from the Black Lung Disability Trust Fund, a federal pot of money that pays for some benefits and is funded by a tax on each ton of coal mined.

Then the Labor Department turns to the coal company deemed to be responsible for the miner’s disease to pay for the benefits. Advocates that work on black lung benefits say, more often than not, the coal company or its insurance carrier will fight the claim, which often pits miners against their former employers in court.

“You often see doctors who testify for coal companies raise an argument about, perhaps the miner was overweight. Perhaps the miner has been exposed to animal manure if he grew up on a farm, and perhaps that is causing his breathing trouble today — after working for 15 or 20 or 30 years in the mines,” said Sam Petsonk, a West Virginia-based attorney who has represented former Murray miners seeking black lung claims.

Petsonk, who is also the Democratic candidate for West Virginia Attorney General, said litigation involving claims for black lung benefits can drag out often for many years and in some cases for decades. In some documented cases, miners have died before their claims were settled.

“If you’ve black lung, you’re dying. There’s no two ways about it. And you may live for a while, but you’re going to die soon,” he said. “And all I have to do is —  if I’m the lawyer on the other side —  wait around, wait him out and they’ll die. And they did. And then, the claimant goes to the widow and you wait her out, too.”

If a coal company goes bankrupt or if no responsible party is determined, benefits may be paid from the Black Lung Disability Trust Fund, which currently covers expenses for some 25,000 miners and their dependents. A recent report from the Government Accountability Office found the trust fund is expected to be $15 billion in debt by 2050.

Murray Energy’s bankruptcy last year added to the burdened fund. In October 2019, the coal operator filed for Chapter 11 bankruptcy protection. The company cited billions of dollars in liabilities and a weak and struggling market for coal.

“Although a bankruptcy filing is not an easy decision, it became necessary to access liquidity and best position Murray Energy and its affiliates for the future of our employees and customers and our long-term success,” then-CEO Murray said in a release issued at the time.

The proceedings, which concluded in September, provided a rare glimpse into the private company. Creditors argued Murray and his nephew and now CEO of the company, Robert Moore, viewed the mining company as a “family piggy bank” and cited a “disturbing pattern of self dealing and abuse of corporate resources.”

They documented multi-million dollar cash bonuses for both Murray and Moore, as well as the use of the company’s aircraft for personal purposes among other allegations. Murray Energy denied those claims.

According to court filings, Murray Energy could be responsible for as much as $155 million under the Black Lung Act and general workers’ compensation, but testimony from the Government Accountability Office shows that the company only offered $1.1 million in collateral.

As is common in coal bankruptcies, Murray and its successor company were relieved of any obligation to pay existing black lung benefits by the bankruptcy court. Those benefits are now being paid by the federal Black Lung Disability Trust Fund.

Under the final bankruptcy agreement, Murray has been removed from company leadership, although he remains on the board.

Murray mining operations have also had a number of high-profile mine safety incidents over the years, including the disastrous collapse of a mine in 2007.

In August 2007, nine miners and rescuers died after the Murray-owned Crandall Canyon mine in Utah collapsed. The Labor Department fined the company $1.85 million for violating federal mine safety law. In 2012, the agency settled with Murray for a reduced amount. The settlement included acknowledgement by Murray Energy for its “responsibility for the failures that led to the tragedy.”

Murray later told NPR “this settlement is not an admission of any contribution to the August 2007 accidents.”

Murray was also sued by the Labor Department after miners complained the CEO personally told workers in a meeting in late 2013 to stop making complaints to federal regulators. Under federal law, miners have the right to speak anonymously to government inspectors about mine safety concerns. In 2019, Murray lost an appeal in the case. The court upheld a decision that Murray must personally apologize.