It wasn’t too long ago that Michael Farmer, a pastor in Charleston, West Virginia, received an email asking him a question that was already on his mind: “As a Black Southern Baptist pastor in West Virginia, what is my role in telling our stories?”

The email was from Ashton Marra, the managing digital editor of a news organization called 100 Days in Appalachia. Marra was inviting Farmer to be a part of a new project, the Appalachian Advisors Network.

“The Advisors Network is really three parts,” Marra said, “And the first part is a database of creators.” This way, Marra said, rather than national or international news outlets sending a journalist from New York City or Los Angeles to cover rural Appalachia, those same outlets could hire a freelance journalist rooted in those same communities, who could tell a more nuanced story.

“The second part is a resource guide,” Marra continued. That way, if those outlets insist on sending an outsider to write about Appalachia, at least that journalist can read a pamphlet or listen to a podcast on their flight in.

The third part, the one for which Marra was reaching out to Farmer, is meant to address a problem journalism industry insiders call “parachute journalism.”

“National media parachute into our region, tell stories about Appalachians that were predetermined. ‘I’m going to go into Appalachia and tell a story about a laid off coal miner who’s gonna vote for Trump.’ And nobody else’s stories [get] told,” Marra said.

To counter that, Marra and her colleagues assembled the Network: a group of 14 Appalachian community leaders from Pennsylvania to Alabama who have agreed to help journalists gain more perspectives on the full diversity of the region. 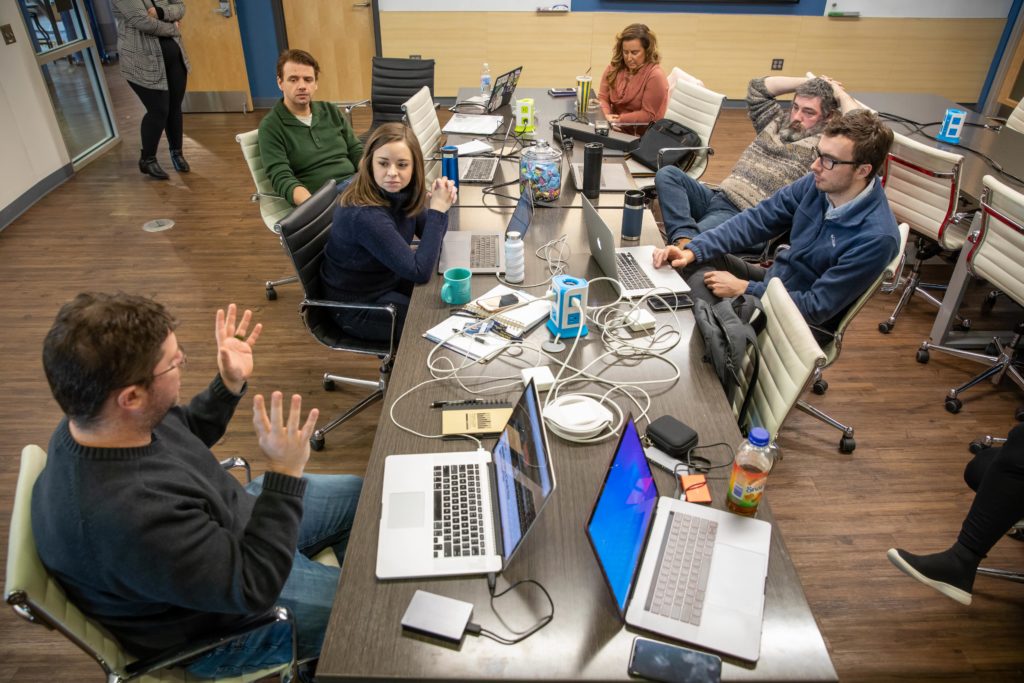 100 Days in Appalachia launched its Appalachian Advisors Network in September.media

The project launched in early September, 60 days before the presidential election, and has already fielded inquiries from outlets including People Magazine. (Disclosure note: 100 Days in Appalachia is an occasional collaborator with the Ohio Valley ReSource, and distributes ReSource content.)

The Advisors Network is not the only new venture in Appalachian journalism making waves this election season. Investigative journalism outlet Mountain State Spotlight launched September with bombshell reporting on the coal empire of West Virginia’s billionaire Governor Jim Justice. In Pennsylvania, two college students are launching a student-run journal of Appalachian stories. And in Kentucky, an oral historian released a podcast documenting the lives of rural LGBTQ people across the country.

“I think what we’re seeing is the collapse of the for-profit model that sustained most local newspapers for 200 years,” she said.

Abernathy is the author of a new report laying bare the threats facing news outlets. Between 2004 and 2020, the report found, one in four newspapers closed or merged with another paper. Still more reduced their reporting staff, leaving what Muse-Abernathy called “ghost papers,” outlets that were still printing news, but lacked the staff or the resources to thoroughly report on the community.

Most of those papers were in communities that were in deep economic distress.

Newspapers die for a number of reasons, but the extinction event of the modern age is largely attributable to the decline of the ad-based for-profit model. For 200 years, Abernathy said, most newspapers relied on subscriptions from community members and on advertising from local businesses. Both those revenue streams have slowed to a trickle: According to the Pew Research Center, the number of people subscribed to a print or digital news outlet is at its lowest since 1940, the first year for which data is available, and ad revenue fell by 62 percent between 2008 and 2018. Of the $71 million spent on digital ad revenue (on all websites, not just news sites) in 2019, more than half went to just two companies: Google and Facebook.

Today, one out of every five journalists lives in New York, Los Angeles, or Washington, D.C., leaving many rural people in “news deserts,” communities where no journalists have their eye on the county executives or members of the local development board.

Abernathy believes nonprofit support of journalism through grants from philanthropic organizations and individual donations – along with innovative for-profit business models and perhaps even public funding – will play an important role in saving local journalism, especially in economically struggling communities.

Ken Ward Jr., a reporter at ProPublica and co-founder of Mountain State Spotlight, prefers to call it civic journalism.

“It harkens into all the other civic institutions we think of in our community, whether it’s a public library or a public school. An important part of civic life is news, is information about the issues that you and your neighbors are facing.”

With a staff of less than a dozen, Mountain State Spotlight is financed by individual donations, by foundations, and by ProPublica, which pays Ward’s salary.

The flurry of new nonprofit Appalachian journalism is not only motivated by pursuing new funding models, but by elevating the voices and perspectives of those who have not traditionally been represented in mainstream media.

“Country Queers is an ongoing multimedia oral history project that I founded in 2013,” said project founder Rae Garringer, who uses gender-neutral they/them pronouns, “Out of a pretty intense personal need to find and connect with other rural queer people.”

The Country Queers podcast, which is supported by crowdfunding, premiered this spring with an eight-episode season.

(Disclosure: Garringer is a former staff member at WMMT, a radio station that is a member of the Ohio Valley ReSource collaborative.)

Garringer isn’t sure they would consider Country Queers journalism, though the boundary of what does and doesn’t count as such can be imprecise. Rather, Garringer said Country Queers is “In the vein of cultural organizing around narrative shift, a cultural shift. To reclaim our history and our elders in these spaces, because of the way that systems have kept us from each other. The way that homophobia has kept us from each other.”

Another publication, the student-run Review of Appalachia, also aims to diversify whose voices get heard.

Friends and co-founders James Henderson and Jack Alex White are sophomores at the University of Virginia and Harvard University respectively. “Once you go to a college that’s a little further away or in an urban atmosphere, you get a little introspective about where you’re from,” said White, a first-generation college student from a coal-mining family.

“I have people in my family line who were illiterate, who couldn’t read,” White continued. “They clocked out at maybe a fourth, fifth-grade education. Brilliant people if you talked to them. People that contemplated the world, that had personal philosophies, that enjoyed consuming art, that were creative. And the rest of the world totally misses that, and opens and shuts the book at poverty, mostly white people, uneducated.”

Though the Review of Appalachia is new and has not yet published any work, Henderson and White hope the publication can be a journalistic or literary home for Appalachian young people who don’t want to have to leave their hometowns to express their intellect.

A similar interest motivates Michael Farmer, the Southern Baptist preacher who is a member of the Appalachian Advisors Network. “Many times, as an African American male in West Virginia, I’m considered to be the monolith for everybody in my community. And I have to pull back and say, I’m not that person. I just have one perspective. But I can give you that perspective, and there’s value in that perspective.”

Clarification: This story has been updated to better reflect the views of Penny Muse Abernathy. Abernathy believes nonprofit journalism is one part of a sustainable future for the industry, but other funding models are also necessary.