In April, Our Lady of Bellefonte Hospital in Greenup County, Kentucky, joined a long list of hospitals that have closed in the Ohio Valley. Fewer hospitals can mean longer travel times for rural residents, which can make a single hospital trip daunting.

Greenup County resident Tiffany Wilburn-Meek says that means a 45-minute drive for some residents to reach the closest hospital.

“Like the road to my grandmother’s house, you are going to have to go a certain speed because it is just too skinny and too narrow,” Wilburn-Meek said. “And especially if it’s dark or anything you have to be careful because if you were to go too fast and you ran into somebody, you wouldn’t be able to stop in time.”

She said the timing of the hospital’s closure still stings. 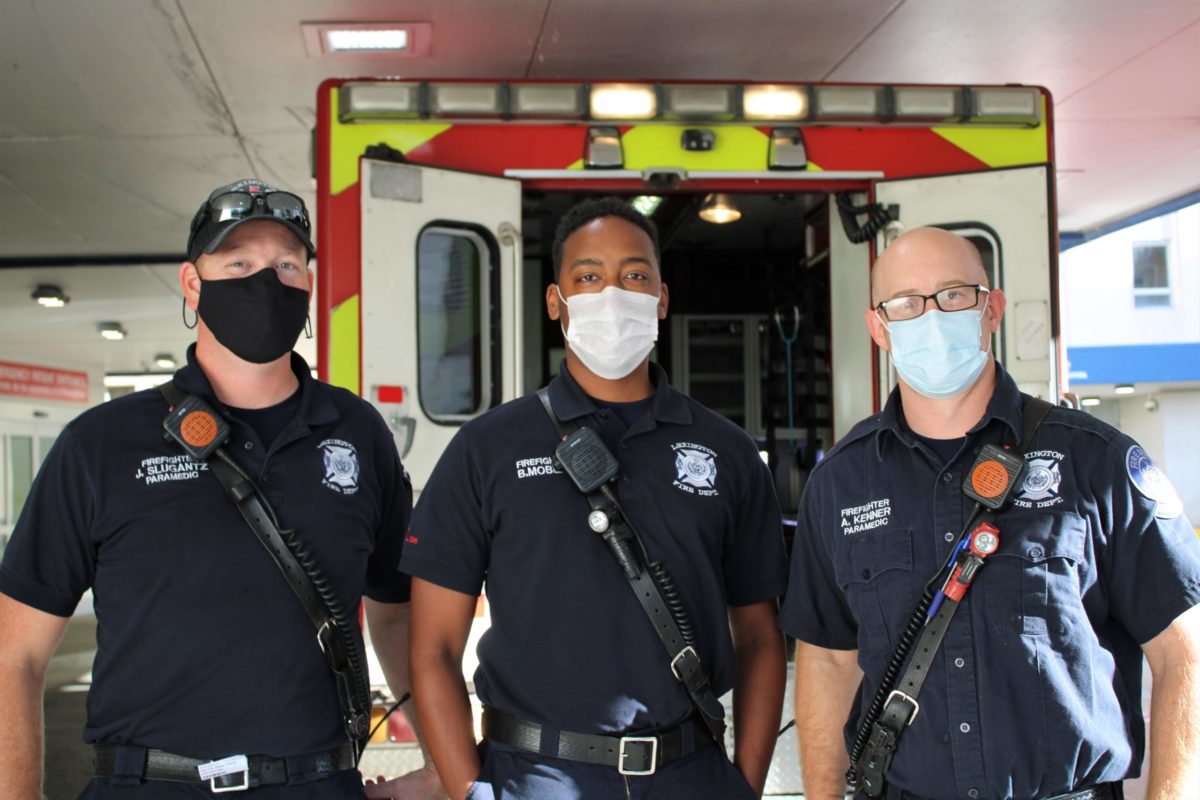 Hospitals serving small towns and rural areas were already under stress before the coronavirus arrived. Now the additional financial strain of the pandemic is draining billions from rural health centers and could accelerate the loss of hospitals.

The Ohio Valley ReSource found that by the end of 2020, Kentucky, Ohio and West Virginia hospitals officials anticipate more than $2.7 billion in financial losses, even after the assistance from a federal coronavirus relief bill.

According to a new report from the Kentucky Hospital Association, approximately 16 to 28 rural hospitals, financially vulnerable before the pandemic, could close eventually. The pandemic has put even more strain on rural counties that already suffer from some of the poorest health outcomes in the country.

The Kentucky Hospital Association report estimates that Kentucky hospitals will lose more than $2.6 billion this year due to COVID-19. After federal funding and efforts by hospitals to reduce costs, hospitals still face $1.34 billion in losses.

KHA President and CEO Nancy Galvagni said the decline in elective procedures has been the biggest reason for decreasing revenue. Those operations were stopped in mid-March due to concerns about coronavirus and didn’t resume until June. But Galvagni said anxieties over the virus still outweigh the need for some to address other health care concerns.

“We’re seeing a lot of people with more acute illness showing that they are putting off care for the longest possible extent before they actually have to show up,” Galvagni said. “Physicians are telling us they are doing more emergency surgery than they have in the past.”

Statewide, Kentucky hospital inpatient levels have returned to 80% to 90% of what they were prior to COVID-19. But emergency rooms have only seen about 60% of the volume they had before the pandemic, Galvagni said.

In Marietta, Ohio, Memorial Health System hospital officials are seeing similar trends. Jennifer Offenberger, associate vice president for service excellence, said MHS serves about 160,000 people, many of whom live in surrounding rural communities. Outpatient and surgical volumes have declined anywhere from 30% to 50% during some weeks of the pandemic and fewer people were visiting emergency departments.

“We knew there was no way people weren’t having symptoms and potential heart attacks and strokes,” she said. “We do have a couple of patients that reached out and said, ‘I’m concerned. I think I may have had potentially a stroke, but I’m afraid to come.’”

Offenberger said telemedicine has helped and some patients can see their doctors by video online. “We don’t want our community to put off important health care. It’s important that you get those regular screenings and if you have symptoms, you get those taken care of,” she said.

John Palmer, director of media and public relations with the Ohio Hospital Association, said in an email that overall, the state’s hospitals will lose $3.81 billion. Ohio hospitals have been awarded $2.38 billion in funding from the CARES Act, the coronavirus relief package Congress approved in March, lowering the total loss to $1.43 billion.

The West Virginia University Health System has 12 member hospitals and lost $200 million between March and May, Chief Financial Officer Doug Coffman said. The health system accounts for a third of the hospitals in the state and Coffman estimates West Virginia hospitals may have lost around $750 million.

The pandemic puts hospitals in a financial vise, draining revenue as it adds to the costs associated with coronavirus safety. Coffman said WVUHS spent between $37 and $40 million on personal protective equipment, COVID-19 testing and increasing telemedicine capacity.

The Ohio Valley has seen an uptick in coronavirus cases over the past month, according to the ReSource COVID Data Tracker, with Kentucky and Ohio experiencing surging numbers of positive cases in recent weeks. Nearly 900 COVID-19 patients were hospitalized in Kentucky as of Oct. 9. 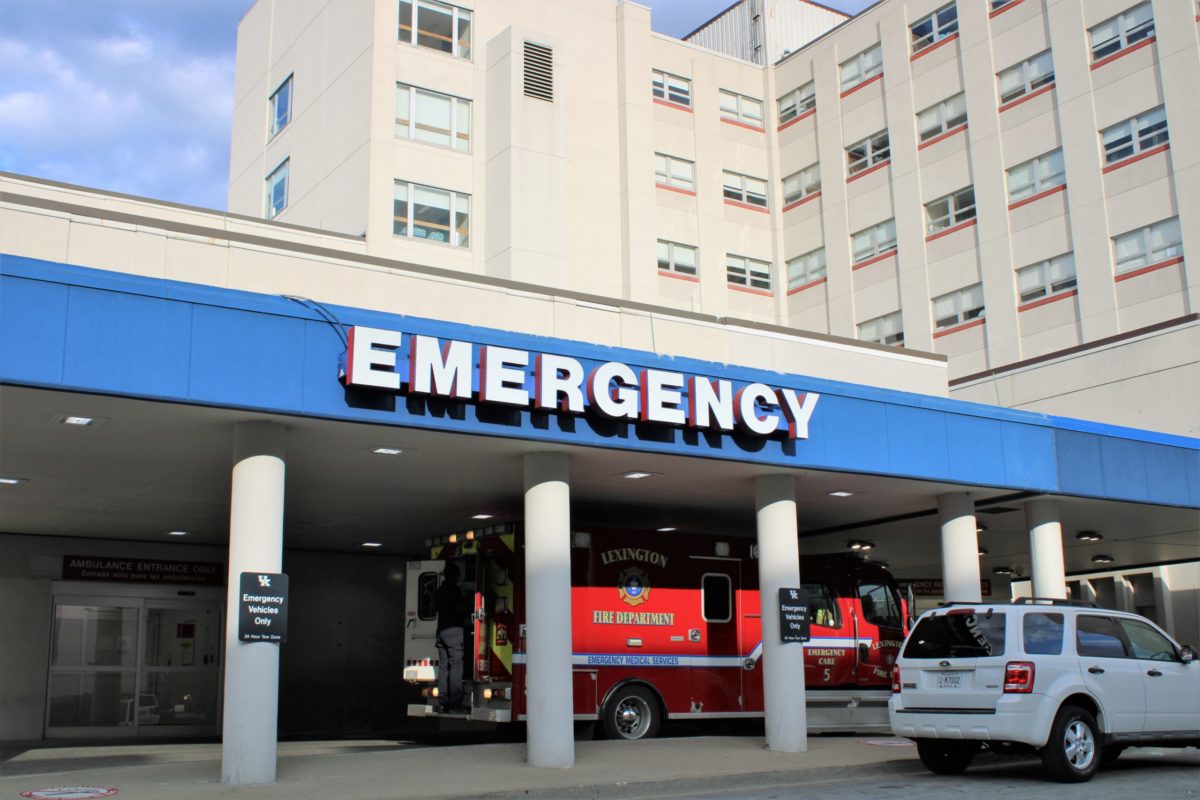 “And so they did receive a special distribution that was enough to help them weather the storm,” Coffman said. “And so as long as they don’t have to pay back those CARES Act monies, they will weather the storm just fine, just like our other hospitals that are in larger communities.”

According to Health and Human Services guidelines for CARES Act funding, the money does not need to be paid back if several terms and conditions are met; however, funding for treating uninsured patients is not guaranteed.

Rural hospitals typically see more Medicaid and Medicare patients, and the KHA report notes that those programs do not pay as much as do private health insurance plans. Many Kentucky hospitals received advances from Medicare and, eventually, hospitals will have to repay that money. Galvagni said repayments are on hold but doesn’t know for how long.It’s also unknown if additional federal funds will come.

“We’re very concerned about that because the last thing a rural hospital needs is to have the federal government come in to take money back to pay back these loans, when you still have COVID losses out there that haven’t been covered,” Galvagni said.

As of early October, Congress and President Trump had not agreed to a second coronavirus relief bill. 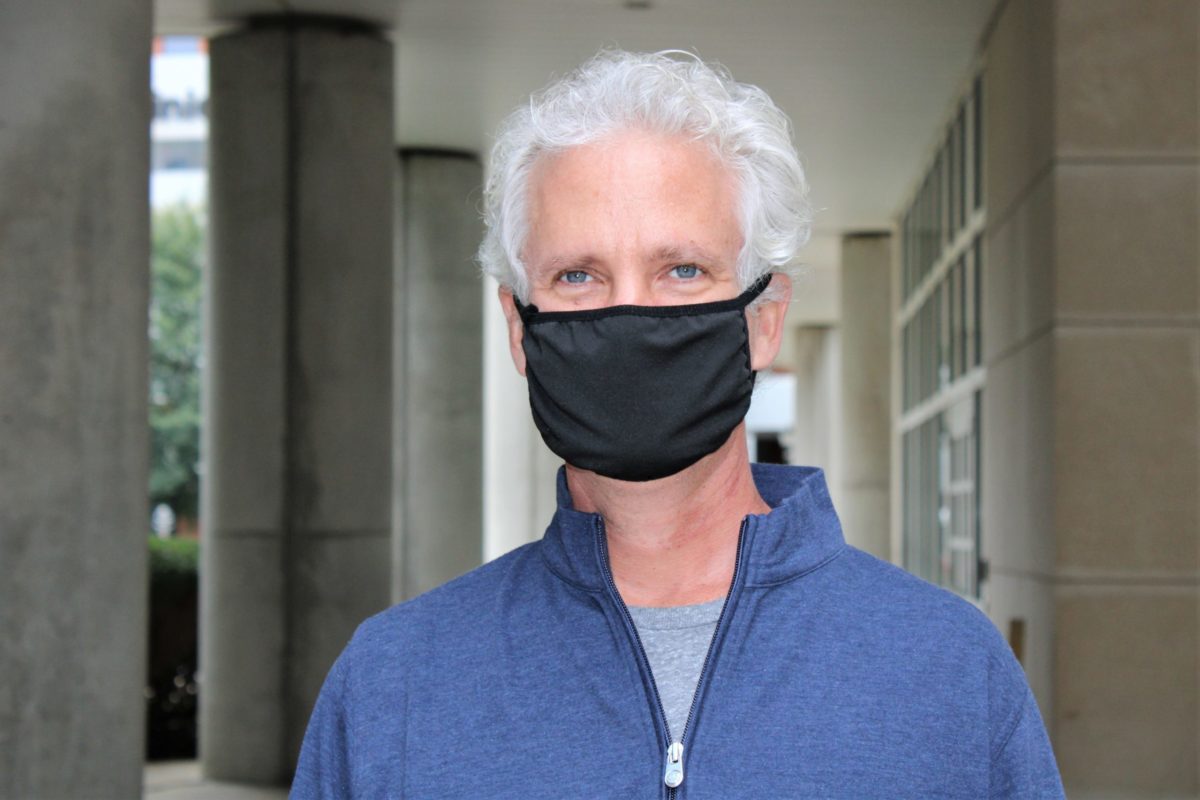 University of Kentucky professor Ty Borders, who directs the Rural and Underserved Health Research Center, said rural areas “have been maybe even more affected because they are disproportionately older than rural communities.”

In counties without hospitals where Kentucky, Ohio and West Virginia borders meet, residents 65 and older make up roughly 20% of the population, far higher than the national average.

One way rural communities have retained access to health care is through telemedicine appointments, and Borders said insurance restrictions have been relaxed since the pandemic began.

“The federal government and maybe many private insurers are now paying for people to pay providers who visit — through telehealth means — patients, whether it’s over the phone or via the internet, etcetera.,” he said.

The West Virginia University Health System went from seeing around 1,000 telemedicine appointments in February to 50,000 in April.

“That’s because people couldn’t come in,” Coffman said. “But even in June, July, August, September, after we reopened, we’re still doing 15,000 to 20,000 telehealth visits a month. And so it really has changed how people are accessing care.”

“If a rural hospital closes, 50% of the time, nothing comes in to replace it,” Galvagni said, and that can have direct effects on both the health outcomes and economic opportunity in those communities.

Some of the highest rates of premature death in Kentucky, Ohio and West Virginia are in counties — some rural — without hospitals. When hospitals close, some studies have shown surrounding areas suffer from greater mortality rates, Galvagni said. And many of the state’s rural counties also suffer higher rates of poverty and unemployment, which can be exacerbated by the loss of a hospital. 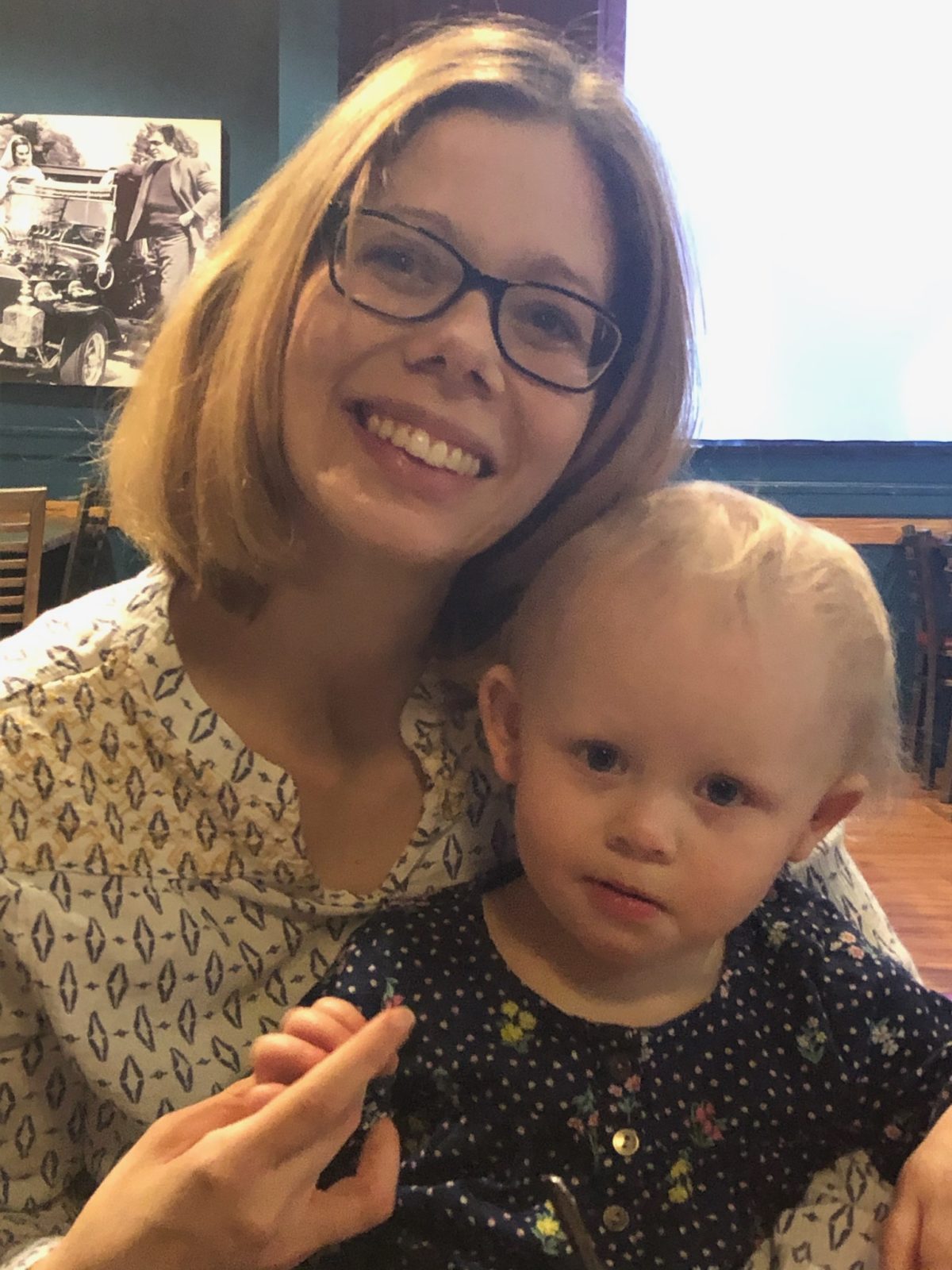 Tiffany Wilburn-Meek and her child Darian.

“If you think about all the people that are employed by those hospitals, doctors and nurses that are there and if there’s not that hospital there, then those health professionals are likely to leave that area,” Galvagni said.

Today, nearly one third of Kentucky’s counties have no hospitals.

Tiffany Wilburn-Meek sees the ripple effects created by the closure of Our Lady of Bellefonte. The hospital and health care group employed 1,000 people in an area with high rates of poverty and poor health outcomes.

In Greenup Co., where Wilburn-Meek lives, the death rates from heart disease, chronic lung disease and diabetes are far higher than the national average. Those are also health conditions that make people more vulnerable to the worst effects of COVID-19. 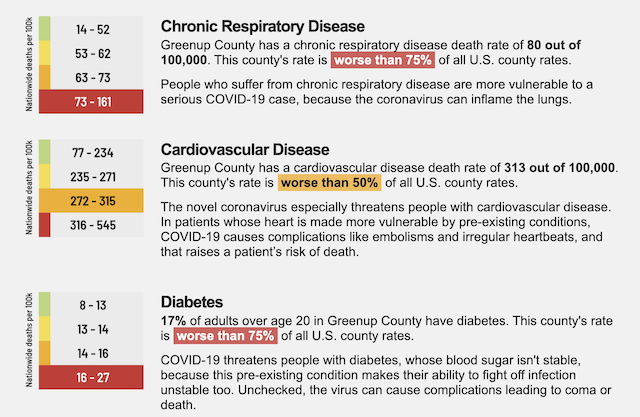 “The poverty is rampant in my county and in the surrounding counties,” she said. “And so it was a hardship for a lot of these people to even get the gas money to get to town to get to the doctor. And now if you add 10, 15 minutes, that’s a big deal to them … some of them don’t have cars; they had to depend on other people to give them rides.”

Wilburn-Meek said elderly members of the community could easily park in front of Bellefonte for medical appointments. But now people travel farther to Boyd County, where that means walking to and from parking garages.