Donate Now!
Can You Wear “Black Lives Matter” Clothing To The Polls? Yes.

Can You Wear “Black Lives Matter” Clothing To The Polls? Yes.

Some voters in Ohio and Kentucky expressed concern that poll workers were advising them that  “Black Lives Matter” attire was not allowed in polling locations. But according to both state’s laws on the subject, BLM clothing is perfectly fine to wear while casting your ballot.

The voters shared their concerns using the tipline operated by ProPublica’s Electionland project.

Political campaign attire isn’t allowed to be worn at the polls in the Ohio Valley. Kentucky, Ohio, and West Virginia have laws prohibiting people from wearing anything with a candidate’s name, campaign slogan or logo, or political party affiliation. But elections experts say that doesn’t apply to items bearing “Black Lives Matter.”

Ohio’s precinct election training manual states that attire displaying a political party, candidate’s name, or attire demonstrating support of or opposition to a ballot question or issue is not allowed. The manual also states that those who refuse to remove or cover the attire still must be allowed to vote if they are entitled to.

Maggie Sheehan, press secretary for Ohio’s Secretary of State Frank LaRose, told the ReSource that no one will be denied the opportunity to vote.

If you have questions or concerns about voting let us know via the Electionland tipline. Text VOTE to 81380 or use this form. 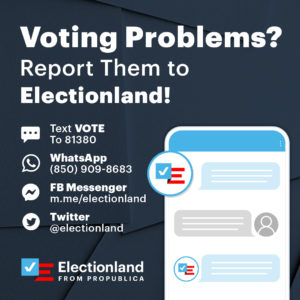