UPDATE: After this story was published, Kentucky Gov. Andy Beshear addressed the vaccine status for people with intellectual and developmental disabilities during his coronavirus briefing on Monday, March 22.

“To clarify questions that were asked last week, all individuals with intellectual or behavioral conditions are eligible to get the vaccine in 1c right now, and we will clarify that online,” Beshear said. “Those were good questions raised, and the clarification needed to be made.”

Nathan French signed up for a COVID-19 vaccination and is waiting for an appointment. The 22-year-old Transylvania University senior has had COVID-19 twice.

“The first time it was asymptomatic, and I was thankful,” French said. “But the second time, I was stricken with lung issues, and it felt like my heart rate was faster than normal. I was horrified for my safety because I just didn’t know what was going to happen to me.”

French has a developmental disability, a form of the neuromuscular disease called Charcot-Marie-Tooth disease, which affects his diaphragm and his nerves. French also has a heart condition.

The second coronavirus infection made French feel like he couldn’t breathe, and it landed him in the hospital for a day where he said he didn’t feel like his treatment was a priority.

“They were more concerned with dealing with people who aren’t disabled, so I felt like I was being neglected and not important as a person,” French said. 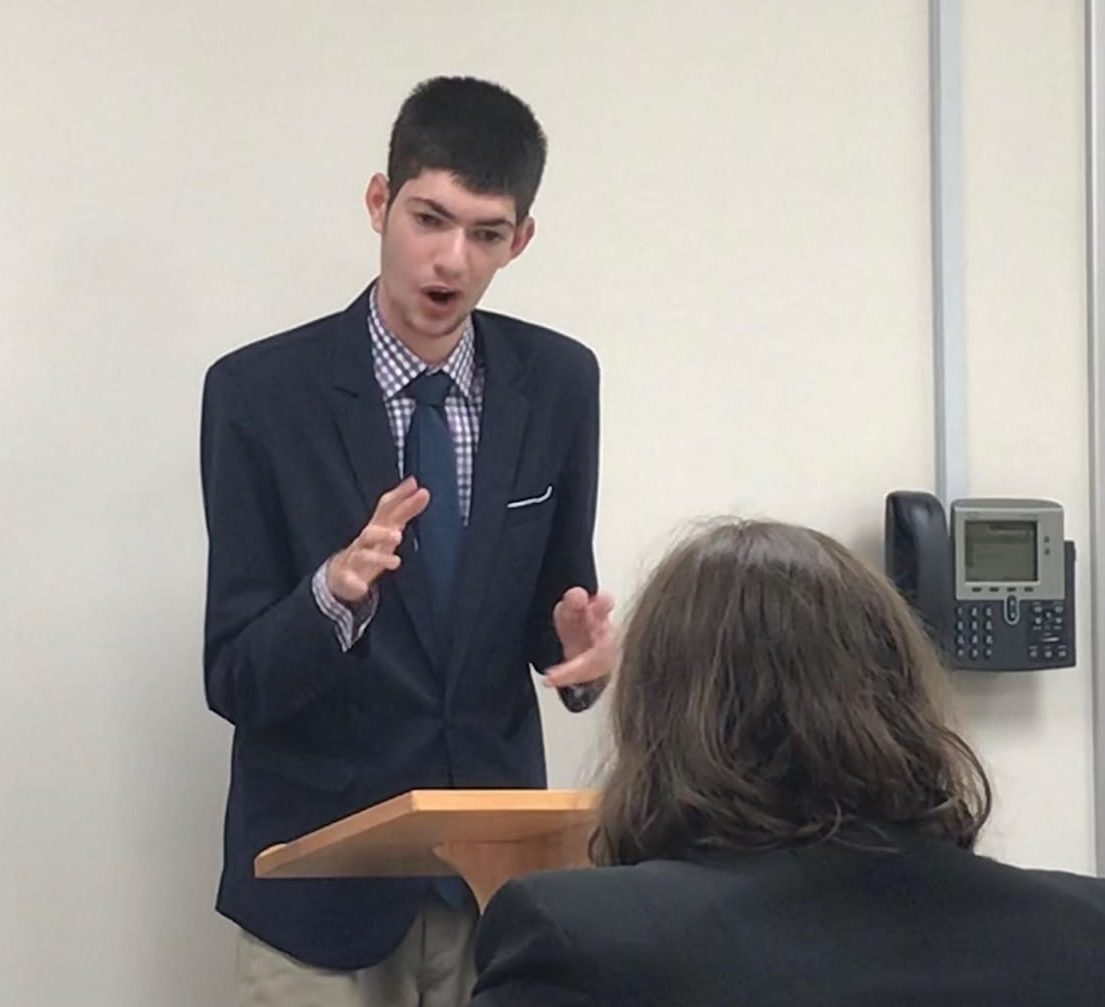 Kentucky college student Nathan French is unsure of his status for a vaccine in Kentucky.

French said he doesn’t know if he is currently eligible for a vaccine in Kentucky, but hopes to get one soon. Despite appeals from disability advocates, and studies showing that people with intellectual and developmental disabilities are at an increased risk of dying from COVID-19, Kentucky’s plan for prioritizing vaccinations did not clearly include disabilities in the early phases.

Because French has a developmental disability, he would have already qualified for a vaccination if he lived in some other nearby states, such as Ohio and West Virginia, which prioritize people with disabilities.

Kentucky’s vaccination plans have prioritized medical conditions that are considered “high risk” for severe COVID-19 by the Centers for Disease Control and Prevention. Down Syndrome is listed as a qualifying condition for phase 1C of vaccinations, a broad category which recently got underway in the state, but that is the only such disability on the state’s list, according to disability advocates.

During a press conference March 16, Kentucky Gov. Andy Beshear responded to a question on the issue from the Ohio Valley ReSource and said that the commonwealth’s vaccination plans closely follow the CDC’s guidelines.

“And so the reason it’s not included in Kentucky is it’s not in the CDC prioritizations, but with that said, we should consider it,” Beshear said.

Questioned again on the subject on March 18, Beshear still did not have a firm answer.

“There was even an internal disagreement with whether these individuals are in 1C,” Beshear said. “They certainly need to be prioritized and we’ll be providing clarity on that shortly.”

Crystal Staley, communications director for the governor’s office, said later that night in an email, “yes people with intellectual and developmental disabilities are in 1C.”

However, by the end of the week, even advocates who track the issue closely were left uncertain about just what the state’s policy is for people with intellectual and developmental disabilities, or IDD.

“Those with IDD and their family members don’t know they’re in 1C if, in fact, they are,” Kentucky Protection and Advocacy Legal Director Heidi Schissler said in an email. “It definitely needs to be clarified and the website needs to be updated to clearly explain it, especially now that supply is greatly increasing.”

A Push For Change

In 2017, an estimated 101,535 people with intellectual and developmental disabilities received services in Kentucky. Kentucky Protection and Advocacy is a federally mandated, independent state agency that works to protect the rights of people with disabilities.

The group sent a letter to Gov. Beshear in December requesting priority status for vaccinations for those with IDD. Legal Director Schissler said some concerns have been addressed. For example, people with disabilities who live in congregate housing were prioritized in the state’s first vaccine phase, which also focused on long-term care centers. In early February, the agency met with the Cabinet for Health and Family Services over Zoom.

“They said, you know, ‘We’re still listening. We’ll get back with you,’” Schissler said. Since then the agency sent another letter and drew attention to a recent study published in the New England Journal of Medicine that found that people with intellectual and developmental disabilities were more likely to become infected and were nearly six times more likely to die from COVID-19 compared to the general population. 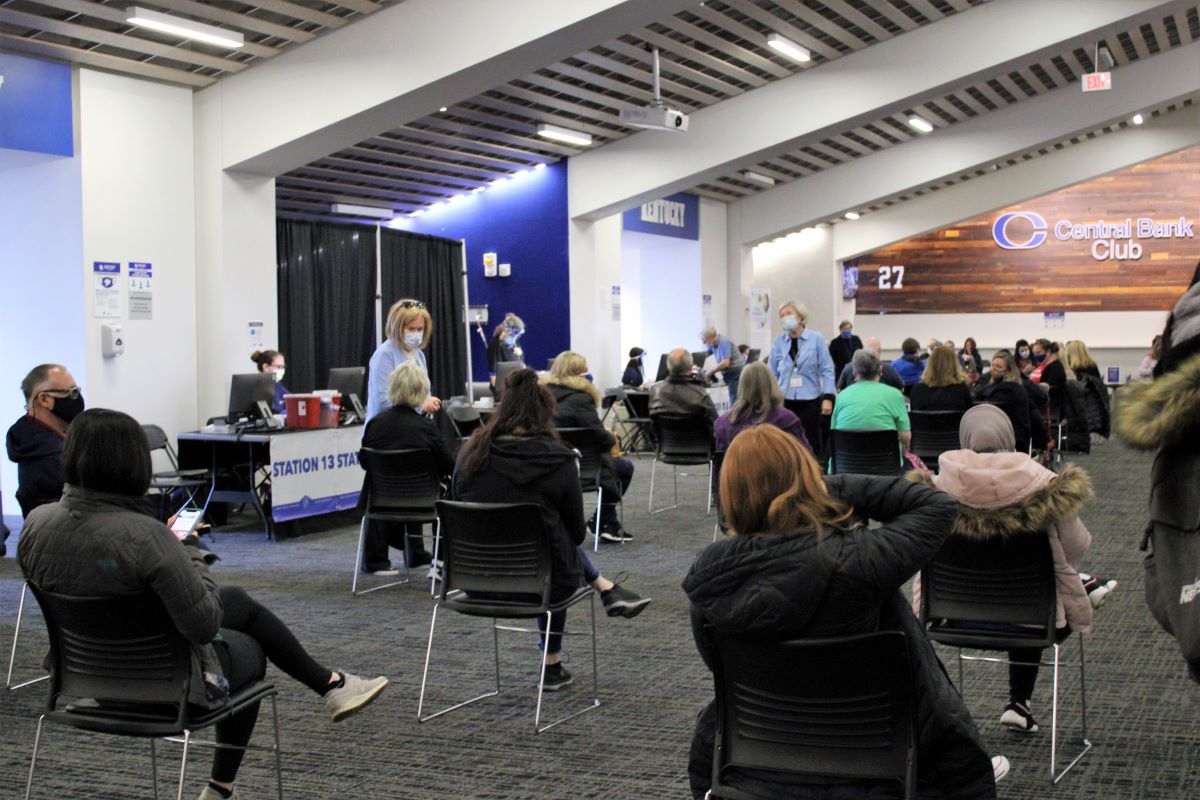 People waiting at the UK HealthCare vaccination site at Kroger field after being vaccinated.

Schissler said she thought that data would get the state’s attention.

“We thought that (study) was truly a game changer — that that was going to make Kentucky officials and the CDC wake up,” she said.

On March 5, the New England Journal of Medicine published a commentary with a blunt warning about the “devastating impact” COVID-19 was having on people with IDD. The study  found that people with intellectual disabilities “are at substantially increased risk of dying from Covid-19.”

One of the study’s authors, Dr. Wendy Ross, is a developmental and behavioral pediatrician who directs the Center for Autism & Neurodiversity at Jefferson Health in Philadelphia. Since the study’s publication, she said about six states have changed vaccine plans to include intellectual disabilities.

“I think the big differentiator about this study that made it so impactful is that it wasn’t saying that intellectual disability is one of many things that can make you more likely to get COVID and die from COVID,” Ross said. “It said it is literally the top independent risk factor for getting COVID. And second, only to age for dying from COVID.”

The CDC’s vaccination guidelines for people with disabilities state that “disability alone does not put you at higher risk for getting COVID-19.” The agency updates the list of medical conditions regularly, but has not added intellectual or developmental disabilities.

Ross said the data from the study was presented to the CDC.

“They did not question the quality of our data, but they did not change the recommendations, and I honestly cannot explain that,” she said.

Ohio listed intellectual and developmental disabilities in phase 1B of its vaccine plan that was slated for distribution on Jan. 25. For people who also have certain medical conditions, county developmental disability boards are in charge of helping them to coordinate a vaccine. People with IDD who do not use county board services should reach out to those boards to plan to get their vaccine.

“Ohio’s decision to vaccinate those with developmental or intellectual disabilities and certain medical conditions was based on the potential severe outcomes these individuals could face if infected with COVID-19, in line with Ohio’s goal to save lives,” Alicia Shoults with the Ohio Department of Health said in an email.

Shoults added that local health departments are vaccinating people who aren’t able to leave their homes.

West Virginia’s vaccine plan lists intellectual and developmental disabilities and care takers in phase 2-A. The state expanded eligibility in phase 2A on March 15.

Anne McDaniel, executive director of the West Virginia Statewide Independent Living Council, said advocates and disability groups have been pushing to make people with disabilities a higher priority within the state’s plans.

“People with disabilities (were) included in phase 2-A all along, but we’ve been in phase one, since vaccination started until just the last week or so,” she said.

McDaniel said it was especially important to focus on people with disabilities living in group settings.

“Because the whole phase structure started with people in nursing homes, people in assisted living, people in prisons,” McDaniel said. “But people with disabilities who are living in group homes, larger group homes, other congregate settings, were not included in that.”

McDaniel said the groups’ continual push for the inclusion of people with disabilities “may have sped up that move to phase two a little bit.”

To ensure people have access to vaccines, ongoing efforts have focused on vaccine registration and pop-up clinics have been set up to reach people who cannot get to vaccination sites.

McDaniel said strategies to have nurses vaccinate people in their homes and in congregate settings are also underway.

“The new vaccine from Johnson & Johnson, I think, is really going to help with that,” she said. ”You don’t have that time frame, from the time it’s thawed, until the time it has to go into an arm,” she said.

Still, identifying people who can’t leave their homes or don’t have access to transportation to reach a vaccine clinic has been a challenge in West Virginia.

Maj. Gen. James A. Hoyer, the Adjutant General of West Virginia, said there isn’t a single way to identify someone who can’t get to a vaccine clinic. Health departments, regional clinics and programs that focus on vaccinating people with disabilities have helped identify about 2,400 individuals so far.

But Hoyer said he’s not sure how many of those 2,400 have been vaccinated in their homes or at health departments.

“It’s probably not something that we have tracked,” Hoyer said.

Hoyer said university health and science programs and pharmacy programs have volunteered to administer shots. “The other group that’s been really exceptionally good is the independent pharmacy folks, because, you know, in some of these small rural communities, it’s not uncommon for pharmacists to go still make a house call for a vaccine.”

When Nathan French learned that people with IDD weren’t listed as eligible for vaccines in Kentucky, he said he was disappointed.

“I have learned to expect to be disappointed,” he said.

But French wants things to change. He plans to become an advocate for people with disabilities.

“I hope that later in my life I can go into politics to represent people with disabilities and make changes at the state and national scale.”