For decades now, rhetoric around action on climate change has been about things like saving the planet, or saving polar bears. Just think: How many times have you seen an image of ice crashing into the sea from a melting glacier, or a sad-eyed seal atop a floe, as part of a climate change message? 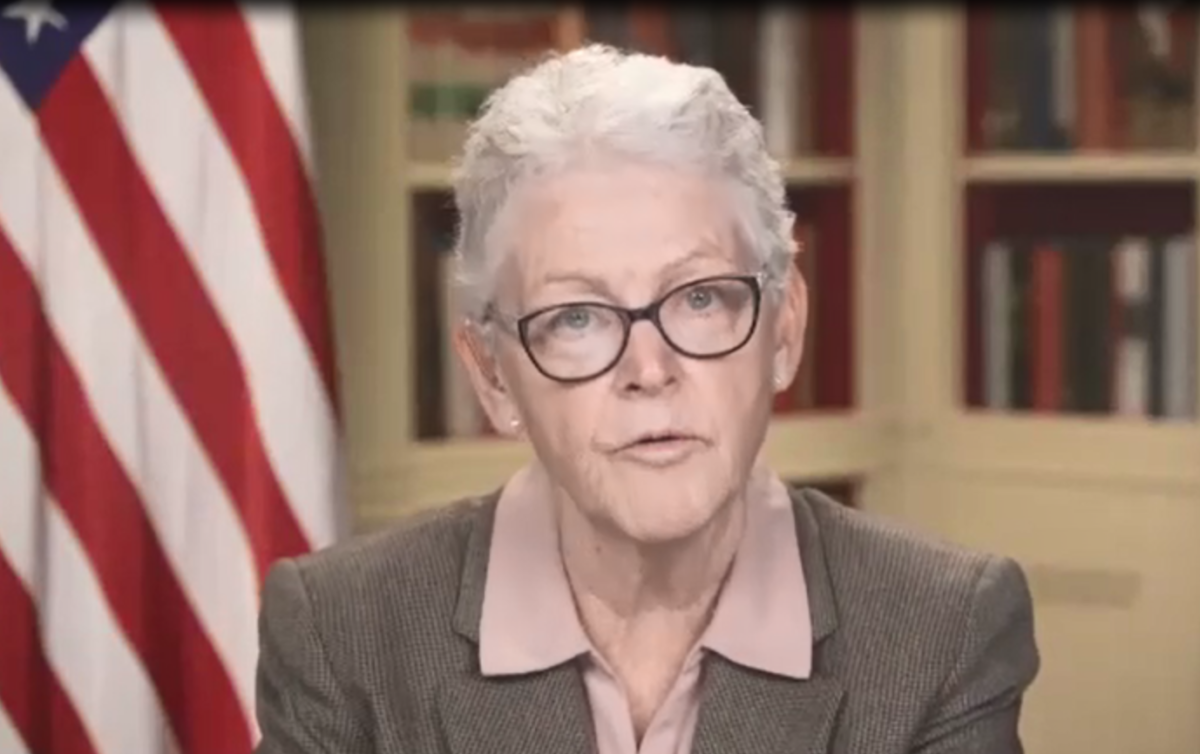 National Climate Advisor Gina McCarthy in an interview with the ReSource.

Forget about polar bears and seals. McCarthy wants to talk about plumbers and steelworkers and the other blue-collar Americans who could play a part in greening the country’s infrastructure and economy.

It’s not that melting ice caps and the like don’t matter for her — they do. But she’s more interested in making action on climate change something that ordinary working people can feel that they have a stake in, rather than something they have to worry about as a potential threat to their livelihoods.

“We do have to act, we have to act on climate,” she said. “But we also have to act to make sure that there’s no worker and no community left behind.”

The coal and gas producing parts of the Ohio Valley and Appalachia are, arguably, among the most likely to feel left behind by a clean energy transition. Communities there have long depended on extracting and burning fossil fuels for jobs and revenue. Fears about the job losses that could come from climate action became ready fodder for Donald Trump’s 2016 and 2020 campaigns.

But the region’s coal sector has suffered years of steady declines, even in the absence of a cohesive national policy on climate change, and even with the support of a friendly Trump administration.

For example, Boone County, West Virginia, was among the most coal-dependent counties in the country, according to a 2019 report from the Brookings Institution. The county has been forced to make painful cuts as coal companies slashed payrolls and production.

The report found that in 2015, coal-related property taxes accounted for $21 million for Boone County’s schools and county government and 21% of the county’s workers were tied to coal. But coal production declined by 70% there between 2012 and 2017, eliminating nearly 40% of county revenue.

Elsewhere in the region, many communities that hosted coal-fired power plants are dealing with the early closure of those facilities by utility companies eager to shed their money-losing coal properties in exchange for cheaper, cleaner alternatives.

In Coshocton County, Ohio, the closure of American Electric Power’s Conesville power plant means not just a loss of jobs but a 10% blow to local school budgets.

The gas industry’s fracking boom has also not produced the kind of economic gains for local communities that its boosters had promised, and many residents are uneasy with the pollution and other trade-offs involved with a proposed petrochemical buildout associated with natural gas.

As traditional revenue sources dry up and population dwindles, many cities and towns across the region are struggling with aging and decaying infrastructure. (And for some parts of the region, climate-driven flooding is further straining infrastructure and threatening antiquated flood protection systems.)

That is the broad situation President Biden is attempting to address with a plan for rebuilding America’s infrastructure while greening the nation’s energy sector. In a speech last week in Pittsburgh, Biden laid out a nearly $2 trillion proposal encouraging cleaner energy in our electricity grid, manufacturing and transportation, and promised massive job growth as a result.

“It builds a fair economy that gives everybody a chance to succeed,” Biden said. “And it’s going to create the strongest, most resilient, innovative economy in the world.”

Biden set ambitious and potentially conflicting goals: to reduce greenhouse gas emissions while generating jobs for places that depended on fossil fuels. Much of that work will fall to McCarthy.

“This is not going to be an easy road forward,” she acknowledged. “But if we shut our eyes to the fact that the transition is happening, or who’s being left behind, then we’re going to miss real opportunities to make people’s lives better.”

You can hear the full interview with Gina McCarthy in the new ReSource podcast, “Welcome to AppalachAmerica.”

If McCarthy’s name sounds familiar it’s probably because she was President Barack Obama’s choice to lead the Environmental Protection Agency in his second term. One of her major tasks as EPA Administrator was to complete Obama’s Clean Power Plan, which would have set long-term targets to reduce greenhouse gas emissions from the nation’s power fleet. However, elected officials from the Ohio Valley and other energy-producing states sued to stop the Clean Power Plan.

Now McCarthy is tasked with a different kind of outreach to coal country. She’s tackling climate change while also coordinating investment in those places that could feel threatened by climate policy. She leads the newly-created Interagency Working Group on Coal and Power Plant Communities and Economic Revitalization. McCarthy points to the jobs potential in renewable energy and work to repair damage left behind by mining. And the administration put some early money on the table, announcing tens of millions for mine land reclamation in the Ohio Valley.

“That can be utilized to pretty much immediately get people back to work looking at closing those abandoned coal mines, which actually represent a hazard and have actually damaged a lot of rivers and streams and water sources,” she said.

Another funding stream from the federal fund for abandoned mine lands can be applied to broader economic development projects in coal communities.

“This new money is going to be all about working and listening to those communities about what economic revitalization we have available,” she said. “It’s about taking the steps to not just close these coal mines, but to look at how we’re going to actually build hubs of economic development in those areas.”

Many of the programs McCarthy cited enjoy bipartisan support in the Ohio Valley and some recent academic work supports the potential jobs gains from a green infrastructure approach. A recent report from the Political Economy Research Institute at the University of Massachusetts, Amherst, for example found that Ohio could gain nearly 235,000 jobs over a decade with such programs, assuming robust federal investment.

“We don’t want just any jobs here. We want high paying jobs, and we want union jobs,” McCarthy said. “You know, these folks built a country on the backs of union workers. Let’s make sure those union workers actually get benefited.”

But coal-dependent communities have been burned before by over-hyped projects that didn’t pan out and worker training programs that didn’t lead to jobs. The administration will have to overcome skepticism — even among some of its allies in labor.

“First of all there’s never been a just transition in the history of America,” United Mine Workers of America President Cecil Roberts said in an interview conducted before President Biden took office. Roberts said there were few such examples internationally and none he knew of that matched the scale that would be required in the U.S.

“So as we talk about creating a just transition, the odds are not with us, are they?”

A UMWA spokesperson said the union is at work on a new strategy regarding the Biden administration’s proposal, and several other labor leaders are enthusiastic about Biden’s infrastructure plan, particularly those whose sectors would stand to gain more from infrastructure projects. 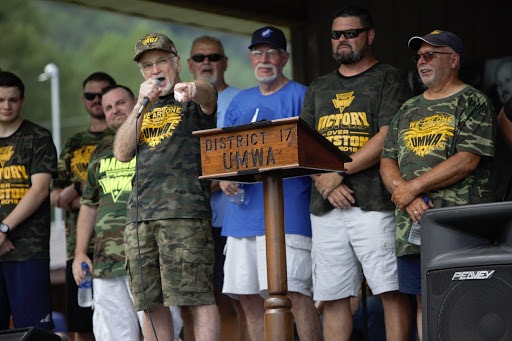 McCarthy said Roberts has a point.

“He’s not wrong that in the past, there’s been transitions and there’s been no support for that transition,” she said. “And I think what we’ve seen is a lot of loss in coal jobs now for a couple of decades. And so this is really about facing that. And it’s about working with those communities about what their opportunities are for economic development, and not pretending it’s going to happen without support. So we have to actually invest.”

The Biden administration has another reason to pay attention to Appalachia and the Ohio Valley, a more pragmatic political need. The administration’s energy agenda must pass an evenly divided Senate where West Virginia’s centrist Democrat, Joe Manchin, looms large as both a pivotal vote in the full Senate and as chairman of the Senate’s Energy Committee. The political path forward on climate change could go right through coal country.

Our interview ended with an open-ended question about why this region is important to achieving the administration’s agenda for climate change — an obvious opportunity to address the politics around her policy goals. But McCarthy didn’t talk about Manchin, or the need for 50 Senate votes.

“You know, I think it’s important as a matter of fairness and equity that everybody benefits about the future that we’re building,” she said. “And if we can prove it to these communities, that the United States government under President Biden is for them, not against them, and that we’re not fighting against fossil fuels, but for our future, then I think we can win.”

You can hear the full interview with Gina McCarthy in the new ReSource podcast, “Welcome to AppalachAmerica.”