Elaine Tanner lives with her life partner, Jimmy Hall, at the head of Mill Creek in Letcher County, Kentucky. Jimmy is a sixth-generation Letcher Countian, and the land is his family land. Together, they like to roll around on their property on their ATV. But lately, Tanner’s spent more time searching for signs of damage than having fun. That’s what she was doing on Thursday morning — investigating her mountain.

“A few days ago,” she said, “the rains came and the mountain busted open.”

After the March 28 rainstorm, Tanner was dismayed to find the hillside looking even less stable than usual. Boulders had shifted downslope. Trees were leaning, she said, almost like they were drunk. Even though the head of the hollow is too high to flood, Tanner, like many who live on higher ground, found herself facing another problem: landslides. 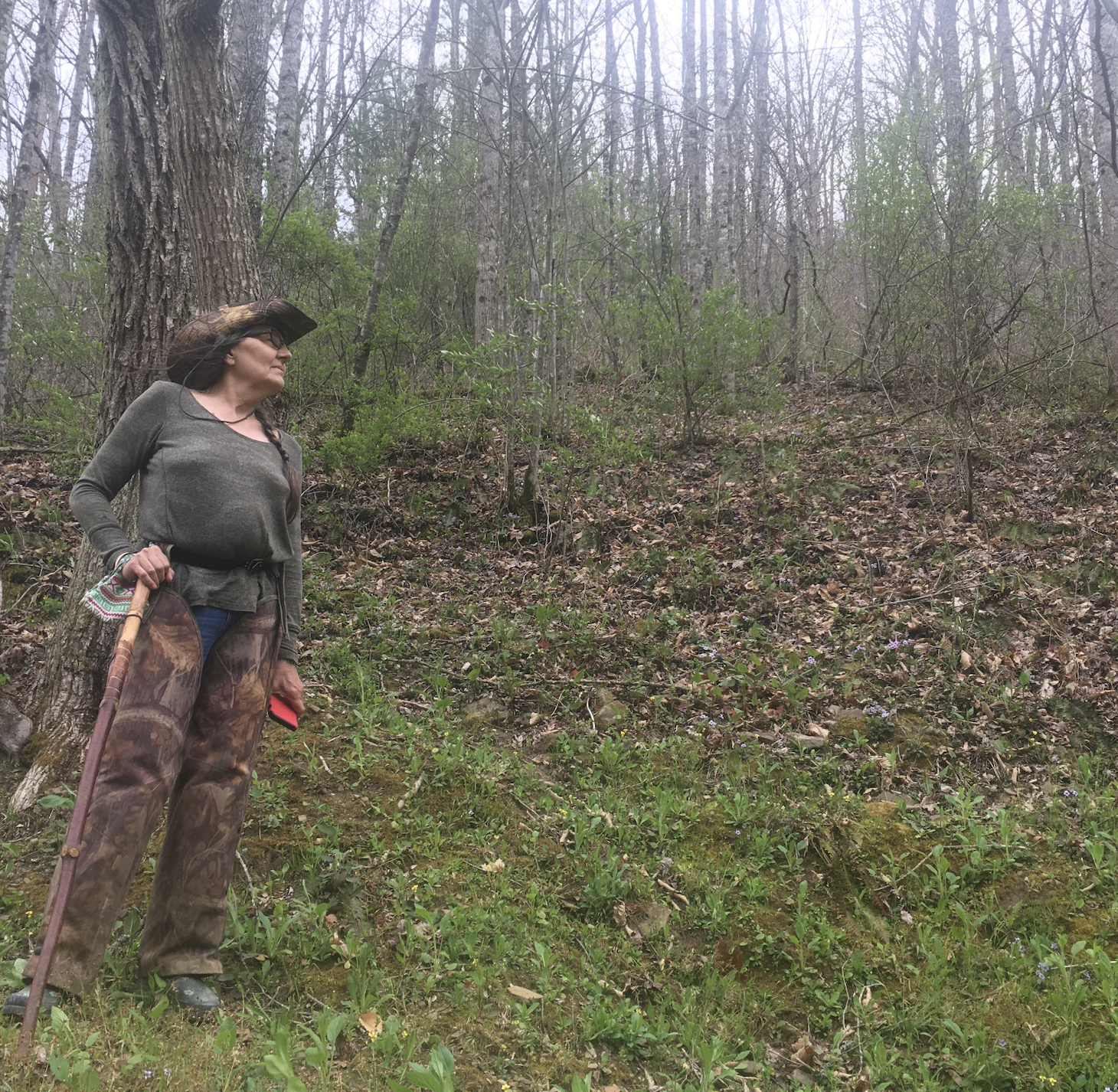 In 2020, parts of the coal surface mine above their residence blew out — an event when flooding causes water pressure to overcome a mine barrier,  forcing earth, water and rock down a mountain. Though no one was hurt, Tanner believes the worst may be yet to come. “When the ponds fill up and saturate that bench,” she said, pointing to the crest of the hill, “the bench is gonna drop.”

The bench is the narrow ledge cut into the mountainside, which a mining company uses to access the mine. Mudflows from its churned-up surface have gummed up the creek, turning it a color Tanner likens to a “dirty milkshake.” The ponds work to control runoff, and fill with water when it rains. 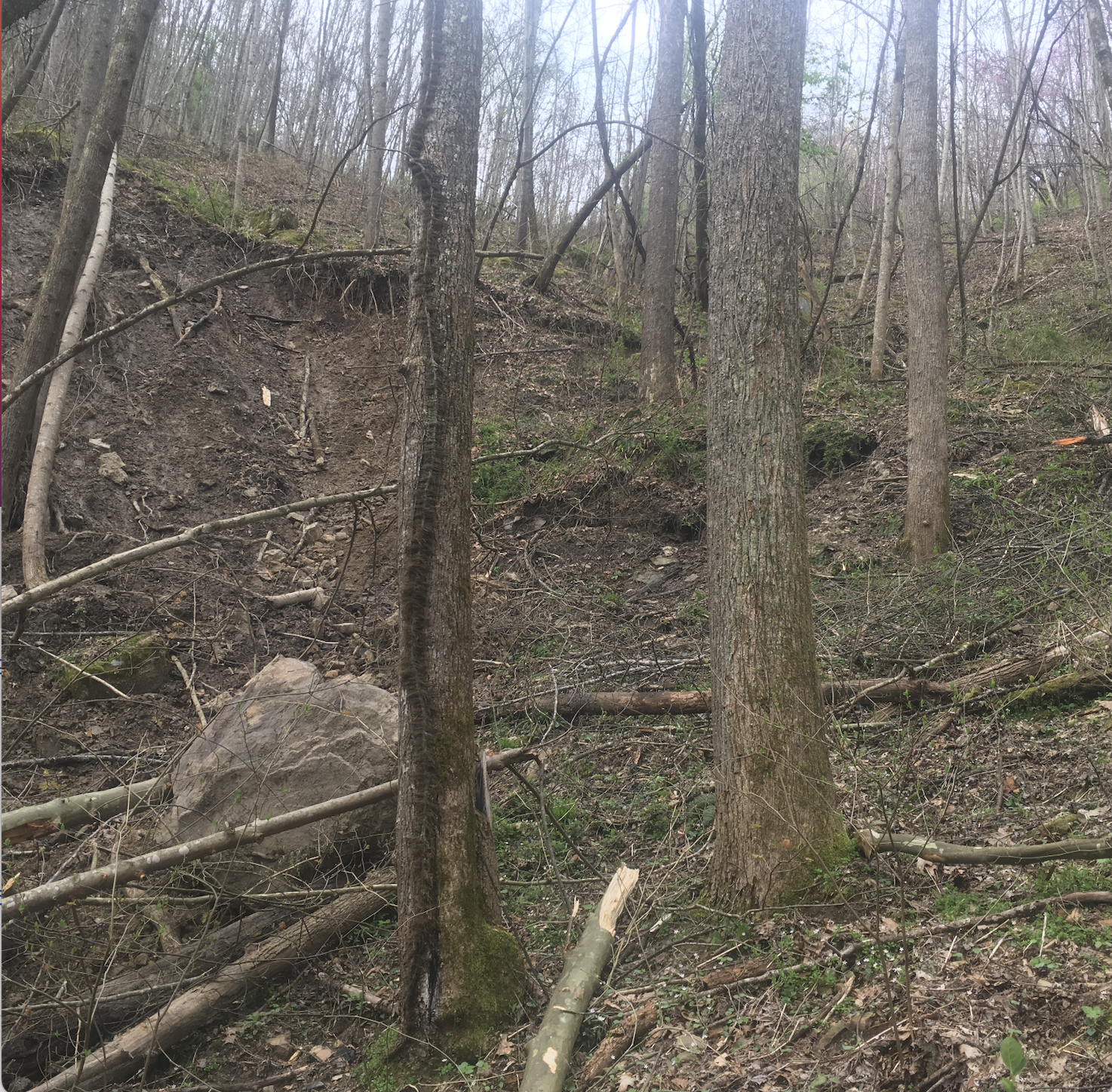 This is just the latest in what Tanner says is a years-long litany of land stability problems that she alleges go back to a coal company called Deane Mining. Now a subsidiary of Quest Energy, the company acquired a permit above Tanner’s house originally belonging to the CONSOL coal company. Ever since, parts of the mountain have been slipping, she said, some quickly and some slowly. (The company did not respond to a request for comment by the time of deadline for this story.)

Parts of the hillside have already fallen, luckily far from Tanner’s house. But when she closes her eyes, she imagines she can hear the trees creaking their way towards her house. 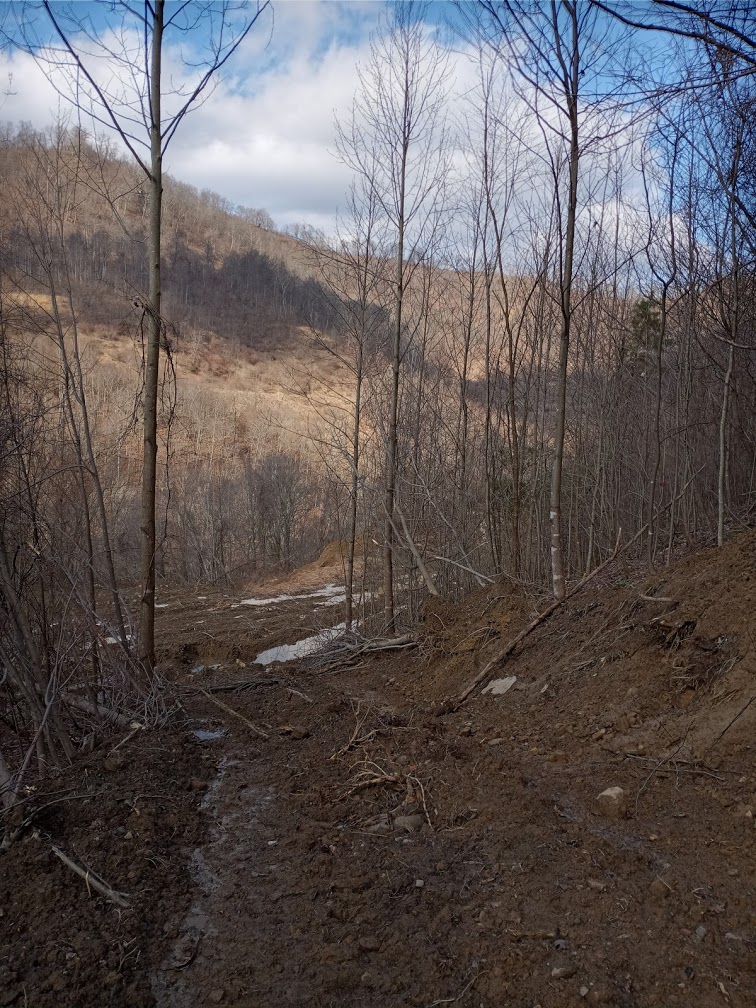 “I have many restless nights here,” she said. “There’s no predicting what this will do.”

Tanner’s worry may be warranted. Climate change has been shown to increase the frequency and intensity of rainfall throughout the Ohio Valley, and major flooding events have now disrupted eastern Kentucky communities twice in the span of a month. In each case, the immediate aftermath involved cleanup from not only extensive water damage, but fallen rocks and dirt. While insurance, or federal disaster assistance, may cover the cost of damage to a flooded home, victims of landslides often have no such recourse, leaving them limited options.

Crawford, who works for the Kentucky Geological Survey, says landslides can take many forms and many names: Mudflows, rockslides, slips, creeps. Each one takes on a different character depending on where it happens, and what it hits. In fact, rockfalls and landslides cost the state $4 million annually, and that’s with a large number going unreported. Eastern Kentucky leads the state in landslides. In eastern Kentucky, nearly everyone is vulnerable, because in much of the area, there’s nowhere to build but the floodplain and the mountainside.

This map compiled by the Kentucky Geological Survey shows landslide sites in red.

Heavy rains add to the risk, Crawford said. He recently completed a study of landslide risk in five counties in eastern Kentucky, which he hopes will help local officials prepare for the worst. Currently, he says, there just isn’t enough data, especially when it comes to correlating rainfall with landslide risk. Because of that, the problem hits hardest at home — because very few insurance companies will cover damage that is both rare and catastrophic.

“When you have that, I guess it’s hard for insurance actuaries to come up with risk maps,” he said.

There are a few options for landowners, and all of them take time, energy, and the willingness to navigate bureaucracy.

If a mining causes a landslide, and the mine is old enough to be covered by the 1977 Surface Mining Control and Reclamation Act, it’s possible to ask the state’s Division of Abandoned Mine Lands to inspect the property. If the mine is determined as the cause of the incident, AML will do what they can to reduce the problem, and a property owner may try to sue to recover damages or force repairs.

For other incidents, there’s often only one other option, called a Hazard Mitigation Grant. Complex and time-consuming, this route requires coordination between local officials and the Federal Emergency Management Agency, as well as voluntary participation from impacted residents. The process can take years.

One community in the town of Evarts, deep in Harlan County, Kentucky, has been going through the process since a 2015 snowstorm caused a mountainside to collapse onto a cluster of homes. The residents were all renters, and after trying, unsuccessfully, to contact their landlord, Harlan County opted to go the federal route. The grant will pay residents to move, but does not help them find housing. According to Harlan County Emergency Management Director David McGill, the county is required to claim the land as permanent green space, which means those homes can never be occupied again. “The individuals will be moving out of that area,” McGill said.

McGill noted that landslides are a constant risk in steep and rugged Harlan County. In late March, flooding in the area caused the usual levels of headache for residents and local officials.  In one case, debris rolled off an unreclaimed mine in Harlan County, formerly owned by the Blackjewel coal company, blocking a road and causing locals to lose drinking water access.

In 2019, Blackjewel filed for bankruptcy, and this year a federal judge approved the bankruptcy, leaving over two hundred permits up for sale and many parcels of land unreclaimed. However, when asked if unreclaimed mine lands were a larger problem, McGill demurred.

Dustin White, a community organizer with the Ohio Valley Environmental Coalition, argues that mining often contributes to landslides. “It really changes the topography of the land,” White said.

Strip mines and deep mines alike change the flow of water across the land, creating disorder in headwaters that can, given the chance, build into chaos downstream. Stripped trees and bare soil increase rain runoff, which clogs creeks with sediment. And abandoned mines, he said, are rarely watched closely.

White noted that the ecosystem has been damaged by more than just the coal industry. Gas pipeline construction, deforestation, road construction, and other forms of poorly planned land use have transformed the landscape.

When asked what many people in Central Appalachia tend to do in the event of a devastating landslide, White grew quiet for a moment, then said, “They just walk away from the place.”

For the Mill Creek hollow, it’s a waiting game. Maybe the mud will stay above their houses;  Maybe one year, when it rains, it won’t. Unless something is done, they fear, their luck might not always hold. And when it happens, who will they call?

Tanner and her partner don’t want to walk away. They have lots of dreams for their land. They have long wanted to open it to visitors as a camping or hunting ground, maybe build themselves a cabin somewhere a little up the ridge. But first, said Tanner, they need to know it is safe. She has been organizing and filing complaints against Deane Mining for many years, hoping to at least gain some measure of safety, make them pay for some native trees on the bare mountain top to hold the water in. 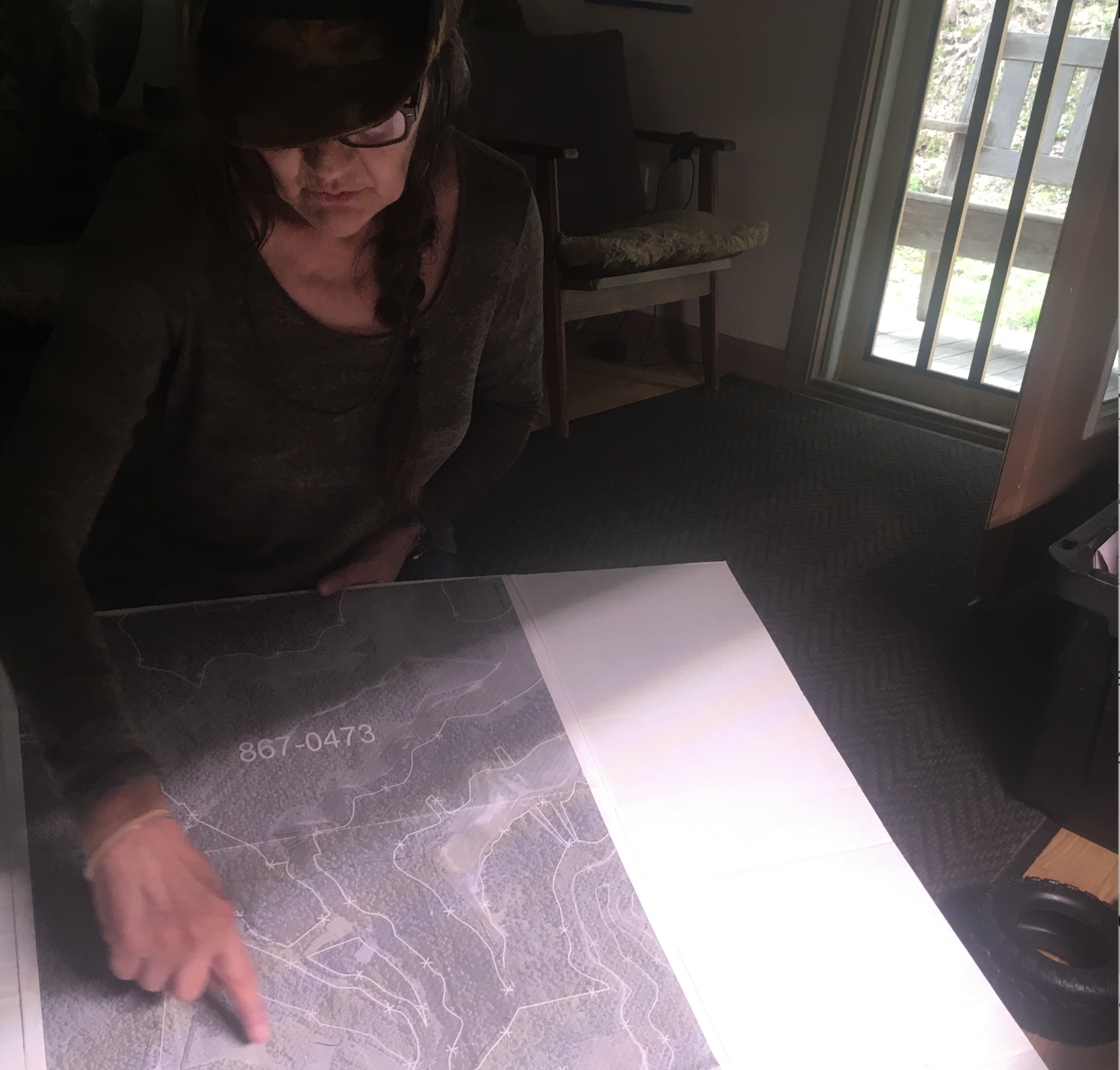 Elaine Tanner points out the mining permit above her house.

“This is where I want to be,” she said as she made her way back down the ridge.

She paused for a moment and looked across the narrow hollow, where her partner’s family cemetery sits nestled in a grove of pines.

“That’s where I’ll go, you know,” she noted, smiling a little. “I’d like to go there knowing I’m not going to be covered up with big rocks and mud.”

Clarification: This story was modified on April 11, 2011, to clarify that the original mining permit on land near Tanner’s property was owned by the CONSOL Coal company and later transferred to Deane Energy.