Phyllis Gibbs wasn’t sure until recently that she’d be here, just a few moments away from receiving a dose of a COVID-19 vaccine.

“Do you feel sick today?”

“Nope,” Gibbs said to the receptionist.

“And you give consent for Pfizer to give you a shot today, correct?”

Gibbs then walked over to one of the nurses inside the Kentucky Dam Village Convention Center in rural western Kentucky — a place that once held a pre-pandemic political rally for statewide Democrats — that has now been transformed into a regional vaccination site designed to dole out hundreds of Pfizer vaccines a day.

And Pfizer was the only vaccine Gibbs would get. She wouldn’t get the Johnson & Johnson vaccine because it was “paused” on April 13, and she’s heard bad stories about the side effects from the second Moderna vaccine dose. She said some of her family is totally against the vaccines — “they’re kind of hard-headed,” she laughs — and some in her part of conservative Ballard County trust “homeopathic” treatments rather than traditional medicine.

But she received her vaccine this week in part due to her son’s experience with COVID-19. 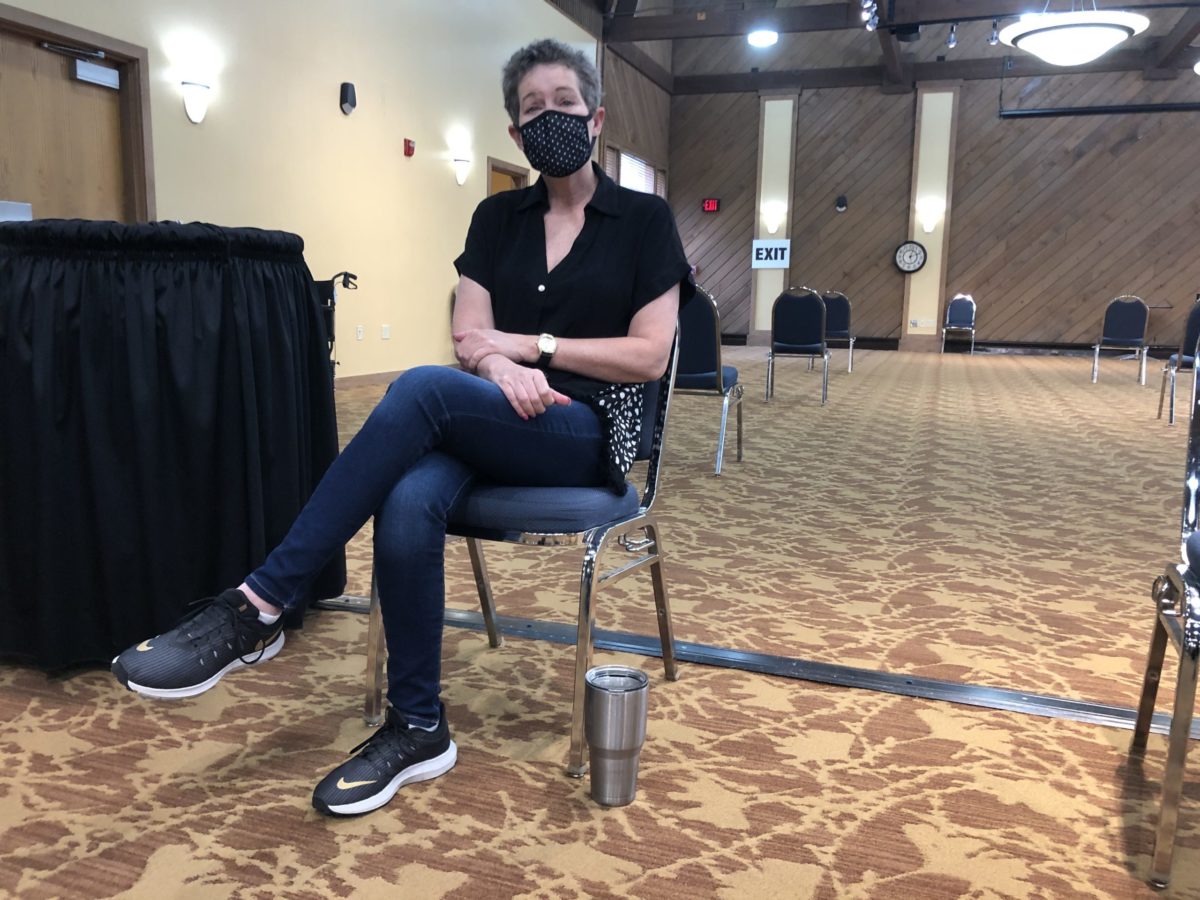 Phyllis Gibbs of Ballard County, Kentucky, waits after receiving her first dose of the Pfizer vaccine.

“He was so sick,” she said. “He called me. He was at the emergency room. Of course, I couldn’t have gone and seen him. He was afraid he was going to lay there and die.”

She pauses to wipe away tears from her eyes, her voice choking up.

“So if it prevents me from being that way, yeah, I’d recommend anybody getting it.”

Gibbs is one of at least 1.6 million Kentuckians who have received their first dose of a COVID-19 vaccine, yet thousands of vaccine appointments remain available across the state. Even as Gibbs was waiting to see if she had any immediate side-effects, most seats at the convention center vaccination site remained empty.

Kentucky is leading the vaccination efforts in the Ohio Valley as 38% of its residents have received at least one dose of the vaccine as of April 16. In Ohio, 36.9% of residents and 34.3% in West Virginia have started vaccination, according to CDC data.

Roughly one in four residents have received a full vaccine course in each of the three states, with 26.2% fully vaccinated in Kentucky, 25.6% in West Virginia and 24.9% in Ohio.

Nationwide, 38.5% of the population received at least one shot and 24.3% were fully vaccinated.

Nearby rural counties in western Kentucky, such as Carlisle, Hickman, and Graves Counties, all have fewer than 20% of people fully vaccinated.

Throughout the Ohio Valley, there are now numerous locations where people can receive COVID-19 vaccines, with expanded eligibility to all adults after months of limited supply and restricted access. But as state leaders and public health officials urge more people to sign up for a shot, there is growing concern that vaccine hesitancy is slowing demand around the region.

Public health officials say they’ve been battling two fronts in recent months — the virus and misinformation. It’s those falsehoods and rumors about the COVID-19 vaccines, spread readily on various online forums, that officials say are becoming a significant barrier to reaching herd immunity, when enough people are immune to prevent community spread.

Just a ten-minute drive from the convention center vaccination site, in Grand Rivers, Kentucky, some have already received a vaccine, while others are more hesitant to receive a shot.

The small town is a tourist destination of ice cream shops, restaurants, and marinas, in between Kentucky Lake and Lake Barkely. Jill Baty of Georgetown, Kentucky, is visiting on vacation.

“It’s an experimental shot, and I am not planning on taking it until we have more information,” Baty said.

Pfizer and Moderna COVID-19 vaccines have been authorized for emergency use in the U.S., and surveys show more Americans seem willing to get a shot. But despite safety assurances from health officials, a Kaiser Family Foundation survey last month found high levels of hesitancy among some groups. Republicans and white, evangelical Christians were the most likely to say they’re not getting a vaccine.

“All my Republican conservative friends are not going to be taking the vaccine, especially if they have any intelligence and do any reading for their own, go to the actual studies,” Baty said. “I can figure this out for myself. So give me the information, give me the data, and I will figure it out.”

Numerous studies show that the COVID-19 vaccines approved for emergency use are safe and effective, and another visitor to Grand Rivers believes the vaccines have been given “bad publicity.” 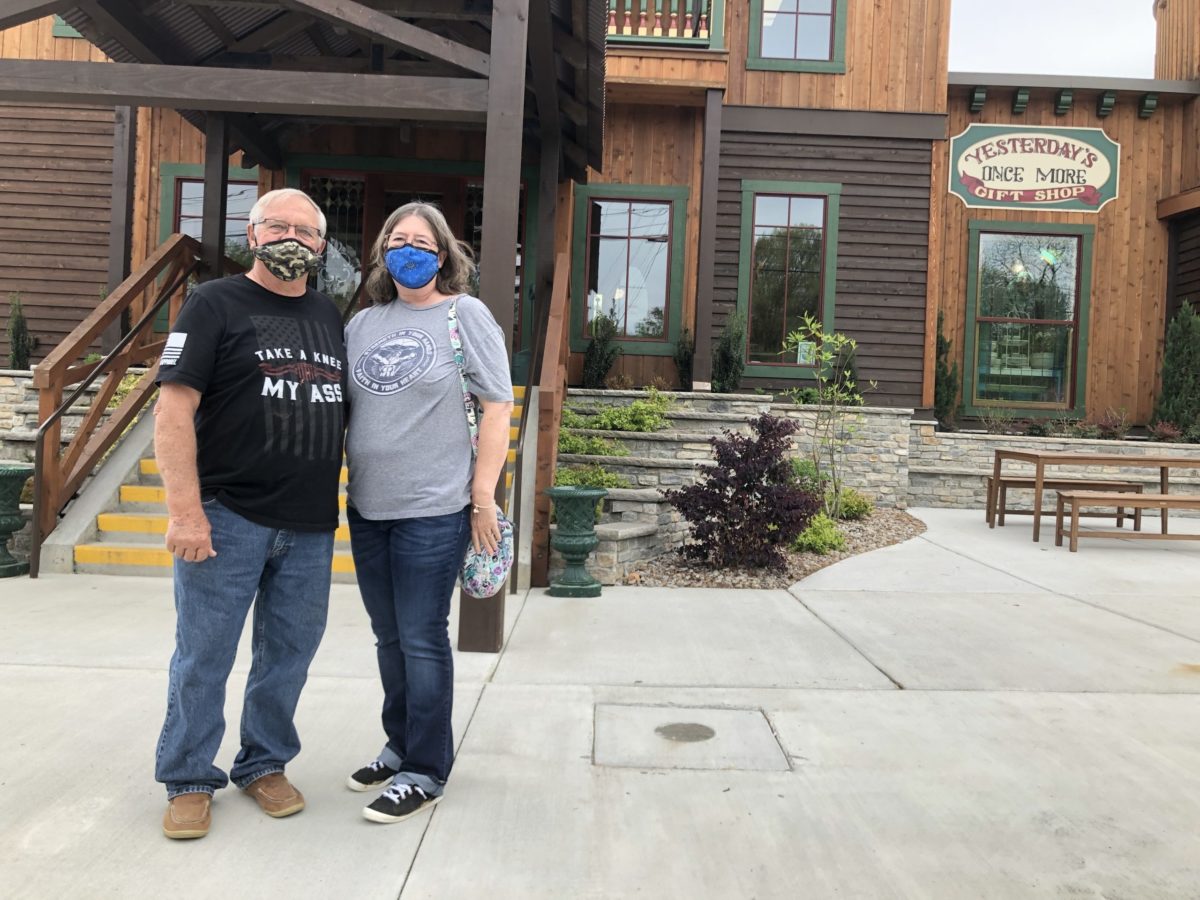 Robert Martin with his partner from Malden, Missouri, in downtown Grand Rivers, Kentucky.

Army veteran Robert Martin of southeastern Missouri is comfortable with the COVID-19 vaccines from his experience in the military with vaccinations he was required to take.

“There’s too many false rumors going around about it. People who, they say they’re experts, but they’re really not,” Martin said behind a camouflage-themed mask. “People have gotten paranoid over it.”

Martin said some people have fallen for false rumors on Facebook and other social media, when some of the side effects are no worse than a flu shot. And for public health officials on the front lines of this pandemic, building trust in these vaccines is as much about batting down falsehoods as it is communicating accurate information.

Susan McKisic is a registered nurse and the nurse director at the Upshur-Buckhannon Health Department. Upshur County has a population of nearly 25,000, and McKisic said many people live outside of the most populous town, Buckhannon. It takes a little more than an hour to travel from one end of the county to the other.

But misinformation travels much faster throughout the county and McKisic has dealt with a slew of it. From social media comments to stories she’s heard from residents. McKisic tried debunking one popular conspiracy theory.

“I had a person tell me that they weren’t going to get the vaccine because we had trackers in them, and I just looked at them,” McKisic said. “And I said, ‘Really?’ And they said, ‘Yeah, you know, it’s that chip they’re putting in you, it’s trackers.’”

McKisic asked the person if they had seen the size of the vaccine needles.

“I said, ‘That is the craziest thing I’ve ever heard of.’”

The health department has updated its Facebook page with information about the number of COVID-19 cases and the vaccine. McKisic deletes comments that dispute facts about the virus.

“Because I feel that some people are vulnerable, they want to believe what they’re told to believe. And I don’t want people seeing the negative comments like that, and putting doubt in their mind,” she said.

Despite the frequent misinformation, the demand for the COVID-19 vaccination has at times overwhelmed the health department. As of early April, 8,222 doses of a COVID-19 vaccine have been administered in Upshur County. But McKisic said that demand won’t help the county reach herd immunity anytime soon.

“I think, as time goes on, opinions will change,” she said. “I think that when they see that everybody that’s had Moderna or Pfizer has not dropped dead or grown a third horn out of their forehead or become deformed or had a deformed child, I think things will change.”

On April 13, the Food and Drug Administration and the Centers for Disease Control and Prevention recommended that the Johnson & Johnson vaccine be paused after a handful of cases of a rare blood clot had been reported. FDA officials paused use of the Johnson & Johnson vaccine out of “an abundance of caution” while they are investigating six cases of blood clots among the estimated 7 million people who have received the vaccine. But the news has complicated efforts to thwart vaccine hesitancy and Kentucky Gov. Andy Beshear said it doesn’t help. 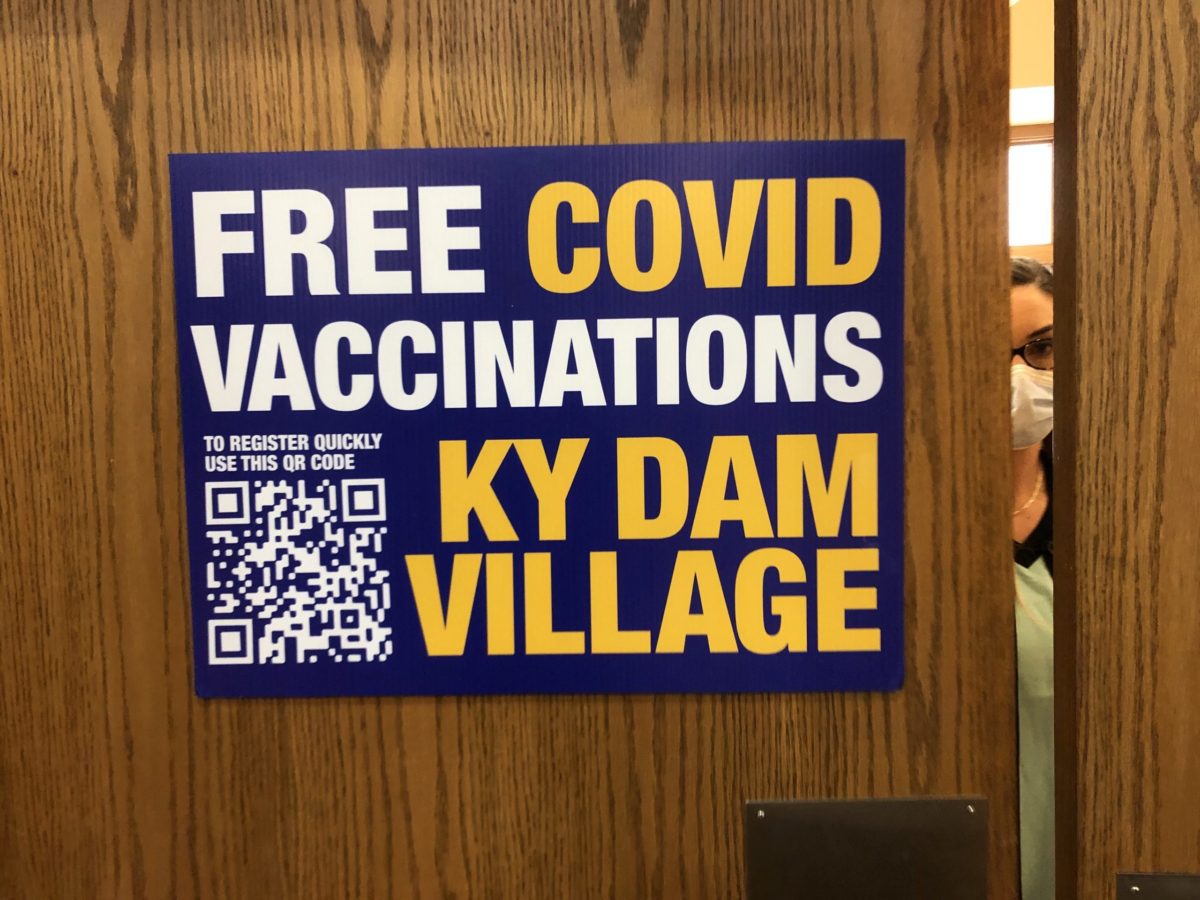 “Our goal is going to have to be to communicate, and communicate and communicate,” Beshear said. “Especially with those leaning towards getting vaccinated — if it was the J & J — what does this news do to their psyche or where they are?”

The Johnson & Johnson vaccine news has also caused health departments to reschedule appointments and cancel some clinics. Kevin Hall, communications officer with the Lexington-Fayette County Health Department in Kentucky, said during the week of April 12, the health department saw a drop in the number of vaccination appointments made.

“Some of that could have been because of the fears people had, some of the national reporting about the concerns with the product, some of the adverse reactions, but most likely it was just a general, the second week on becomes a little bit slower and harder to fill those up,” Hall said.

Previously a drop in appointments led the health department to offer shots for anyone over age 18 before vaccines became available to everyone statewide. Hall said it’s important to reach herd immunity because some portions of the population won’t get vaccinated.

“There are people who won’t get a vaccine because of religious reasons,” Hall said. “There are going to be some people who simply just don’t believe in the science of any vaccine, let alone one that they consider has been rushed through.”

Hall also said that side effects might prevent someone from getting vaccinated.

“Maybe they want to get it and they can’t afford to take off work for a couple of days because of the potential for side effects including fatigue,” he said.

Sharing personal COVID-19 vaccine experience, Hall said, is one way to convince others of the vaccine’s safety.

“We need … people who have gotten vaccinated to share their true and honest stories about what the experience was like, including the mild side effects, the soreness in your arm, the body aches, the fever, the fatigue, and to help calm some of those fears,” he said.

Kelley McBride, public information officer for the Madison County Health Department in eastern Kentucky, said appointments have been steady since vaccines became available to people 16 and older. But for anyone who is hesitant, McBride said it’s important to address doubts.

“We don’t want to minimize anyone’s hesitancy,” McBride said. “But we would continue to encourage people to read more information to please call one of our nurses who can answer those questions that they might have.”

Baptist Health Richmond runs a COVID-19 vaccination clinic at Eastern Kentucky University. Recently, the clinic reduced its hours from five days a week to three as demand for vaccinations dropped.

Mendy Blair, Baptist Health Richmond chief nursing officer, said she respects people’s choices, but if someone is still unsure about the COVID-19 vaccines’ safety, she said it’s an opportunity for education.

“Once you have educated an individual and let them make that informed decision, probably a good percentage of them do end up changing their mind once they understand what the vaccine is, what it does and how it can help.”

Dustin Wilcox, an investigative reporting fellow with WKMS News, contributed to this report.