Kentucky coal production and employment fell by the smallest amount in nearly two years, according to new data.

The state’s coal mines produced 6.5 million tons in the first three months of 2021, according to the Energy and Environment Cabinet, a decline of 9.6% from 2020. 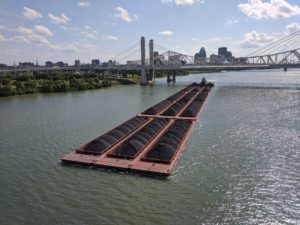 Coal being barged up the Ohio River.

A decade ago, Kentucky coal mines produced more than 27 million tons every three months and employed more than 18,000 workers.

Coal shipments to power plants declined 22% in 2020, according to the U.S. Energy Information Administration, reflecting a drop in electricity demand due to the coronavirus.