Black and Hispanic Americans in the Ohio Valley are getting vaccinated against COVID-19 at a lower rate than are white Americans, according to data obtained by Kaiser Health News, which offers a more detailed view of vaccination progress among different groups.

The data shows that vaccination rates vary across races and ethnicities in the Ohio Valley – with slightly more than a fifth of Black Americans in the Ohio Valley who received at least one dose of a COVID-19 vaccine, the lowest rate across all groups.

According to the KHN data, about 23% of Black residents and 28% of Hispanics in the Ohio Valley were partially vaccinated, compared with 33% of white residents. Asians outpaced the rest with 44% members of this group reported vaccinated.

Black residents lag white residents in almost every state with 22% of Black Americans and 29% of Hispanics vaccinated nationwide compared with 33% of white Americans. Asians and American Indian or Alaska Native led the pack with more than 40% of the population vaccinated in each group.

These trends confirm the fears that the vaccinations among people of color wouldn’t be on par with other groups – thanks, among others, to vaccine hesitancy, access issues and decades of unequal treatment of Black Americans by the nation’s healthcare system.

Ben Chandler, chief executive of the health advocacy group Foundation for a Healthy Kentucky, called it a matter of great concern.

“We need to be deeply concerned about the health of the people in the African-American community,” Chandler said.

“We need to work very hard to ensure that they are safe. And, frankly, I don’t think they are safe unless they get vaccinated,” he added.

Statewide, vaccination rates in the Ohio Valley have slowed down as the pool of residents eager to get vaccinated is shrinking. As of May 20, 44% of Kentuckians, 43.5% of Ohioans and 38.4% of West Virginians were reported partially vaccinated compared to 48.2% nationwide.

With 38.1% of its population fully vaccinated, Ohio is the only state in the region that matches the national average. Kentucky’s 36.6% fully-vaccinated population and West Virginia’s 33% trail the nationwide rate of 38.1%. 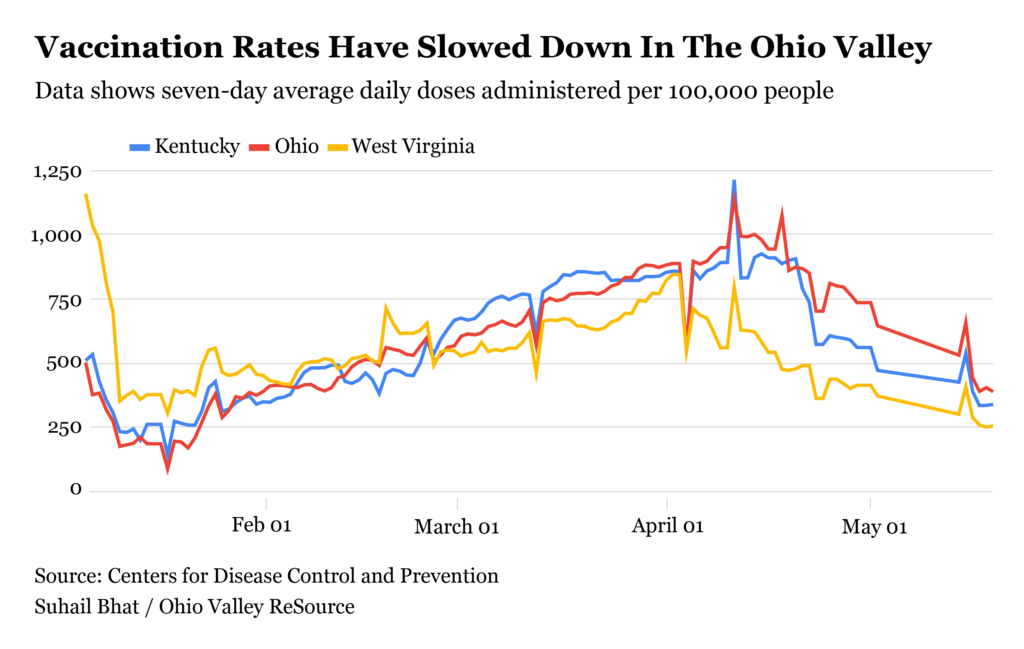 The gap between vaccinated Black and white West Virginians was narrower compared to the other two Ohio Valley states as about 28% of Black Americans in the state were vaccinated compared to 31.4% of  whites.

These numbers exclude a fifth of the vaccinated individuals in the Ohio Valley as race or ethnicity information for them is missing –– a worrisome discrepancy in the reporting system that the Centers for Disease Control and Prevention wants to fix.

Regardless, this new data KHN received through a public records request gives the most comprehensive look into the vaccination rates, as not all the Ohio Valley states publish a racial breakdown of the vaccinations.

Kentucky publishes weekly COVID-19 vaccine demographics reports that have numbers by race but not by ethnicity. While West Virginia publishes vaccination data for two races, Black and white, Ohio doesn’t publish any numbers by race or ethnicity. Furthermore, Kentucky and West Virginia don’t remove Hispanics from white and Black groups, which blurs the picture of the vaccine-related enthusiasm among different communities.

Because the pandemic unequally affected Black and Hispanic communities, public health officials feel an obligation to boost the vaccination rates to stop the virus from further harming those who are the first to get impacted in a disaster and the first to suffer in a bad economy.

Both federal and state officials have acknowledged the need for more equitable distribution of vaccines and have pledged to counter any disparities that may rise.

Kentucky Gov. Andy Beshear, said in February that low vaccination rates among Black Kentuckians is “unacceptable” and that the state needs to address “root causes” that create these racial disparities.

“Our underserved and minority populations haven’t been treated right in the past when it comes to vaccines, or even experimentation,” Beshear said.

“There are Ohioans who simply do not have equal access to healthcare,” DeWine said. “We have worked hard to address these gaps, especially in our efforts to roll out the vaccine, but there is still more to do.”

To overcome access issues, Ohio Valley states have mostly depended on pop-up vaccine clinics in underserved communities and public messaging that attempts to combat hesitancy. Also, Ohio and West Virginia announced incentive programs to encourage residents to get their shots. Ohio launched a $1 million lottery drawing for vaccine recipients while West Virginia announced a $100 savings bond for young people who get their vaccine shot.

Time will tell if these initiatives work. For now, it is clear that inequity in vaccination is a prominent issue that needs to be addressed so that the states could reach so-called “herd immunity” sooner than later.

According to Chandler, the state needs to remove any roadblocks from the distribution side while getting down to the “grassroots level” to build trust in the Black community.

“We’ve got to have a ground game, we’ve got to take the vaccines to them. And then we also have to work on the issue of trust,” Chandler said.

The Black community, he said, has “difficulty historically” with trusting the government that “comes from a long history of discrimination, not just in the health care area, but discrimination across the board against African Americans in our society, which frankly, goes back 400 years.”

“We’ve got to work hard at overcoming those challenges.”