When Angela Lautner was diagnosed with Type 1 diabetes in 2000, she remembers the list price of insulin being approximately $25 per vial. As an airline employee, Lautner has been laid off frequently over the years. That loss of employment has disrupted her health insurance coverage, which means Lautner has struggled to pay for a hormone she can’t live without.

“And there’s times that I’m instantly in a pay-or-die situation,” Lautner said. “I’m laid off with very little notice. Sometimes no notice, actually. And then there goes my insurance.”

Today, she said, that same vial of insulin costs about $275 without insurance. An investigation by the Senate Finance Committee found that insulin manufacturers have raised prices even though no substantial improvements were made to the drugs. The burgeoning cost of the drug has led people to ration injections. Complications from insufficient levels of insulin range from amputations to blindness and death.

Lautner is one of an estimated 34.2 million people in the U.S. with diabetes, according to the Centers for Disease Control and Prevention.

West Virginia tops the list as the state with the highest diabetes mortality rate in the U.S., with other Ohio Valley states close behind: Kentucky has the nation’s fourth highest mortality rate; Ohio comes in at number nine. 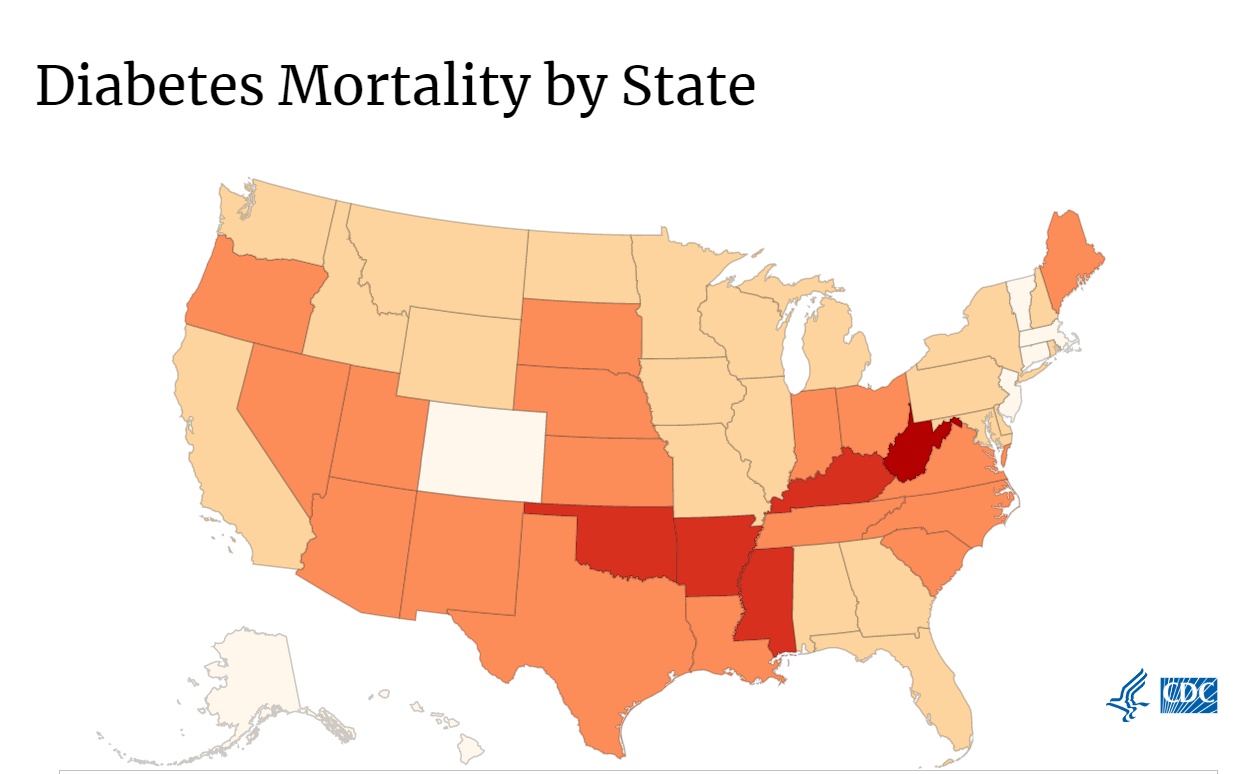 West Virginia has the worst diabetes mortality in the U.S.. Kentucky is fourth and Ohio ninth.

The cost of insulin has prompted state lawmakers to step in. Both Kentucky and West Virginia recently passed insulin copay caps, a limit on the amount a person pays through insurance. Ohio lawmakers plan to introduce a bill this year. Although the new laws provide an avenue that will help thousands afford insulin, they are limited to certain types of health insurance. The copay caps are just part of the approaches state and federal lawmakers are considering to reduce costs passed to people with diabetes.

Lautner started the Kentucky Insulin for All chapter in 2018. The citizen lobbyist group wanted to do something about the price of insulin, not just the copays associated with the drug.

The chapter has worked with the legislature since 2018 and Lautner said the group has a “good reputation.”

“We do not take any money,” Lautner said. “We do not accept pharmaceutical money — money from the foreign pharmaceutical companies — and that allows us to speak freely as patients, as people actually living with this.”

Kentucky’s insulin copay cap law applies to state-regulated insurance plans. Insulin copays cannot exceed $30 per month — there are no restrictions on the type of insulin used or the amount needed.

About 22,000 people in the commonwealth will benefit from the new law, but that’s a fraction of the state’s total number of people with diabetes. Public health data show at least  474,000 Kentuckians with diabetes, and some estimates go even higher. Lautner herself is excluded from the law’s benefits because her health insurance plan is federally regulated. Congress would need to step in to regulate federal plans.

“The insurance system in the United States is so complex that it is nearly impossible for either our state representatives or advocates to explain who is and who is not covered,” Lautner said.

Despite not benefiting from the copay cap, Lautner said it’s important that the new law will help people.

Danny Bentley is a pharmacist and a Kentucky state representative for Greenup County and parts of Boyd County. Bentley, a Republican, and lead sponsor of House Bill 95 worked with Representative Patti Minter, a Democrat, and Kentucky Insulin for All.

No lawmakers voted against the bill. At the bill’s signing, Bentley said he was asked about its cost.

“I said, ‘What is the cost if they don’t have insulin?’ he said. “You know what the cost of an amputation is today? It’s several thousand dollars.”

Bentley said paying for insulin costs much less than complications from ketoacidosis, amputations and deaths. The only pushback Bentley received was from insurance companies.

“We did a fiscal note on doing this bill,” Bentley said. “And the insurance estimates that the bill is not expected to increase administrative costs but may increase their premiums between .0 to .1%.”

Across the border in West Virginia, insulin copays are capped at $100 per month. But an effort this year to lower that cost failed to attract the bipartisan support the Kentucky bill received.

Democratic Senator Stephen Baldwin introduced legislation in the last legislative sessions pushing for a lower cap, but the bill died in committee. He tried negotiating in 2020 for a $25 dollar cap.

But Republican colleagues rejected the proposal.

“The reason we couldn’t get a lower amount than $100 was just basically a capitalism argument, Baldwin said. “They said that there’s a free market. You know, we’re not comfortable with a limit at all, but we’re willing to give you a certain limit, but we don’t want to go any further than that.”

Baldwin, who is also a church pastor, isn’t sure if things will change next year.

“And there just has been zero interest in moving the ball any further right now,” he said. “It’s really important, but I don’t have a whole lot of hope for it coming down any lower next year.”

“It also cuts down on long-term health costs, which help save that family money, helps save the state money,” he said.

Ohio Senator Nickie Antonio, a Democrat representing parts of Cuyahoga County, plans to introduce an insulin copay cap bill this year. In some cases, she’s heard that people are paying upwards of $1,200 a month for insulin. 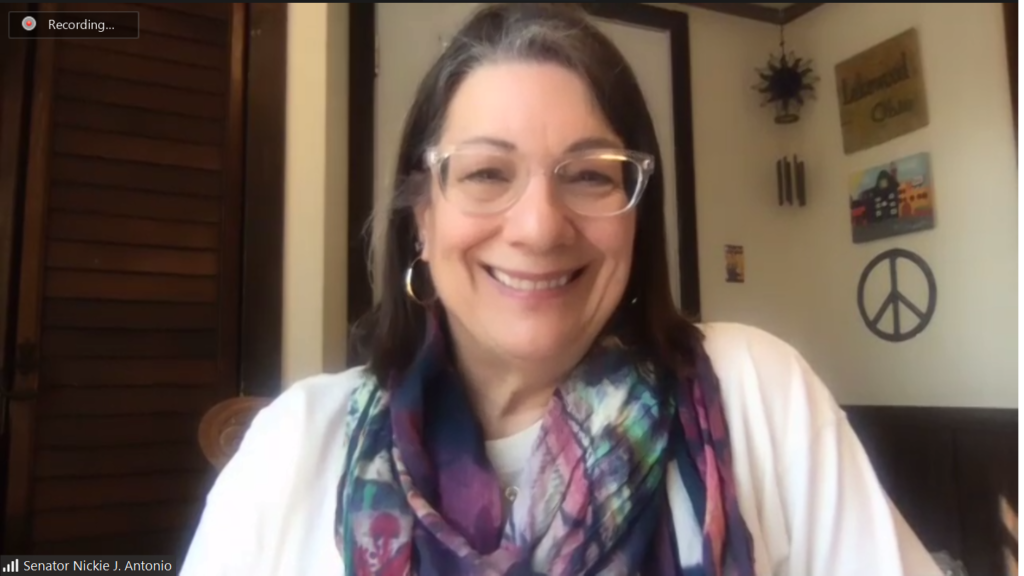 “And that to me is unconscionable,” Antonio said.

She said about one million Ohioans have diabetes and prices of insulin have tripled. Last year, a bill was introduced that capped copays at $100.

“I like the $30 cap myself,” she said. “Now you’re talking about truly being affordable to everyone. At $100, it’s still out of reach for some people, I think.”

Even with insurance, insulin coverage can be complicated. David Johnson of Richmond, Kentucky, is a diabetes advocate and has latent autoimmune diabetes. He’s written to his congressional representatives asking that insulin be added to all insurance companies’ drug formularies or lists.

“Not all plans will carry your insulin,” Johnson said. 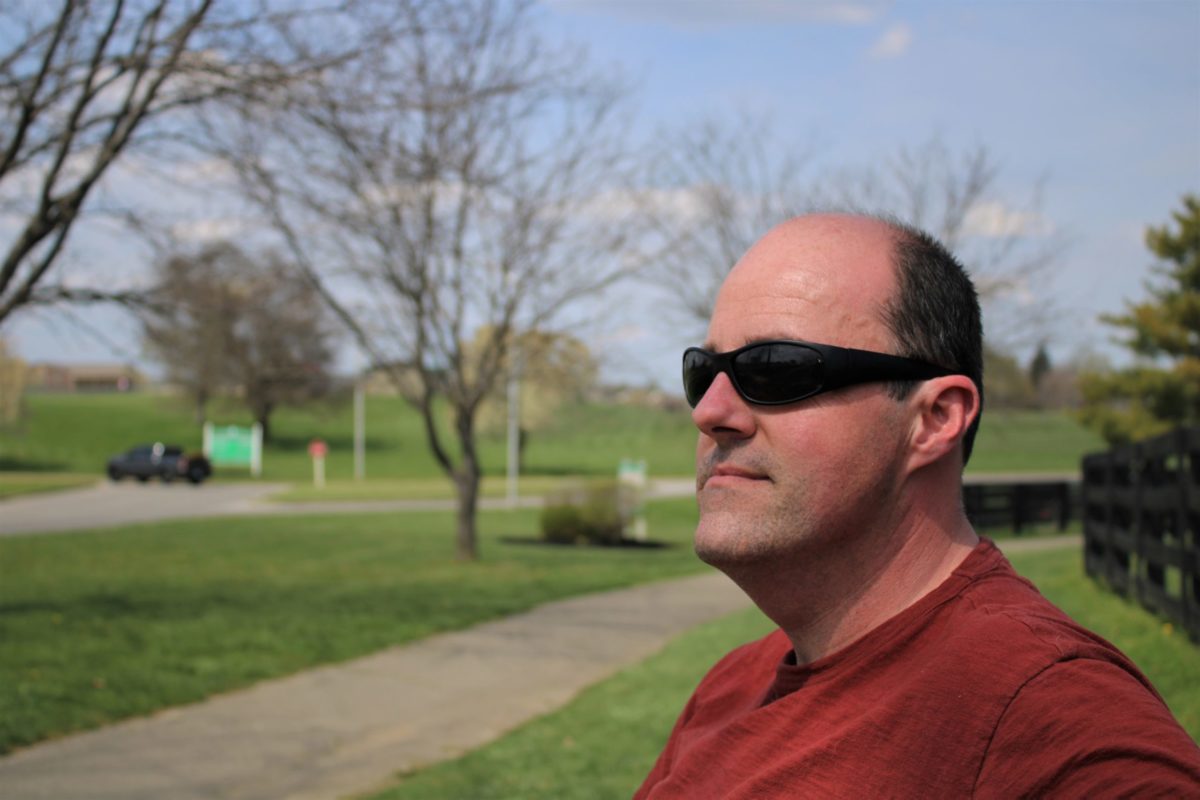 David Johnson has faced high prices for the insulin he needs.

Johnson said he’s grateful for the insurance he has now. But he has struggled to pay for insulin in the past. By simply changing jobs, Johnson had to wait 90 days for health insurance.

“I’m not doing anything wrong, because I’m a productive citizen, I’m paying taxes, I’m willing to buy the health insurance programs that they’ve got,” Johnson said.

Paying hundreds to possibly a few thousand of dollars for insulin while he was waiting for his insurance coverage wasn’t an option.

“And at that point, it became, okay, who on Twitter, who on Facebook is giving out insulin? And I had someone from Texas give me a box of Tresiba, which was my long-acting insulin,” Johnson said.

Kate Thomas is the chief advocacy and external affairs officer at the Association of Diabetes Care and Education Specialists, which works on legislation and with regulatory agencies like the Department of Health and Human Services.

In addition to Kentucky and West Virginia, insulin copay caps have been passed in seven other states. Thomas said these laws are catching on and have been positively received. But they don’t address costs across the board.

“There’s a caveat that this is not a cure-all to address out-of-pocket costs for insulin,” she said. “They’re needed — it’s definitely a starting point. But this really only applies to people with private or commercial insurance.”

A nearly two year Senate Finance Committee investigation turned up a laundry list of factors driving up the price of insulin. But its chief finding: Insulin manufactures arbitrarily raised the list prices of insulin, which led to people paying higher prices at pharmacies.

“In particular, the investigation found that Novo Nordisk and Sanofi not only closely monitored the others’ price increases, they actually increased prices in lockstep—sometimes within hours or days of each other — a practice known as ‘shadow pricing,’” according to a statement released by the Senate Finance Committee.

Thomas said her association advocates for “system-level changes” and more transparency to make sure insulin is affordable.

“Policymakers must continue to eliminate policies and rules, like gag clauses, which prevent pharmacists from discussing less expensive options for purchasing medications with consumers and patients,” according to the group’s pricing principles.

One change at the federal level now allows Medicare Part D plans to cap monthly insulin costs at $35. This spring, a handful of proposals from Democrats and Republicans have been introduced, including one bill that would cap out-of-pocket insulin costs and one that would require the federal government to negotiate the price of “insulin products.”

“I’ve heard stories of people before the pandemic certainly traveling to Canada to buy their insulin because they could find it cheaper there. You know, that’s that’s a problem,” Antonio said.

If changes aren’t made, Antonio said the problem will persist.

“People who can’t afford to purchase medication, life saving medication, they’re going to die sooner than they should.”