The ‘Beef’ With Beef: Cattle, Climate Change, And Alternative Meat

Many people might think of Blake Munger as a cattle farmer as he walks through his pasture land in western Kentucky, but he sees things a little differently nowadays.

“I don’t know which is more valuable, my cattle or the pasture at this point. I used to say cattle, but this plays a bigger role than the cattle,” Munger said, referring to the fields of fescue grass his black and red Angus cattle are grazing in. 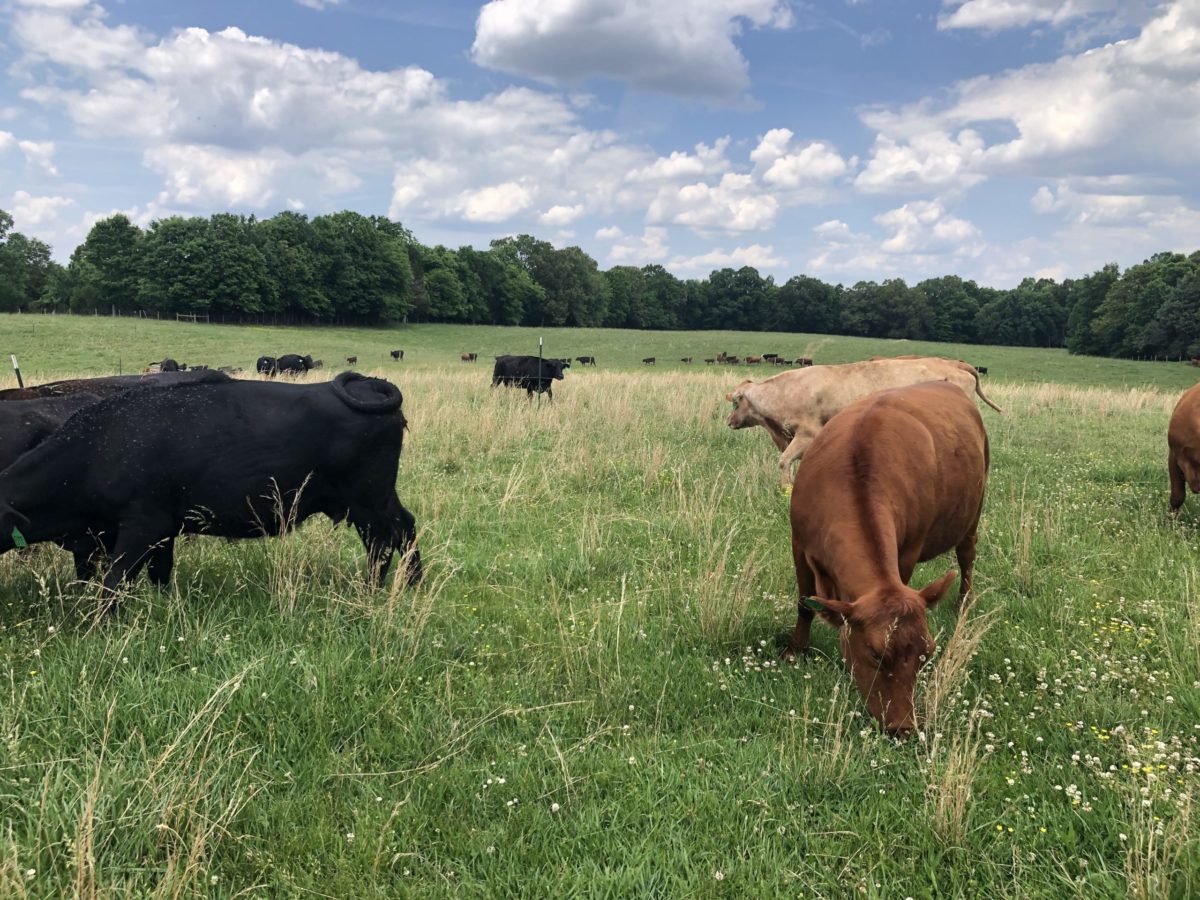 Black and Red Angus cattle graze in a pasture in Calloway County, Kentucky.

He walks through the fields, pointing out how what’s growing in the pasture changes — from the flowering buttercup weeds to the more established fescue grass — indicating how “hard” the soil has been impacted by his cattle and other factors. When his cows have mowed down a field for a few days, he moves them to a new field to let the grass recover.

He and another local cattle farmer, Landon, didn’t start using rotational grazing until a handful of years ago to help improve the quality of the grass their cows were getting. But they also see another benefit to allowing the grass to grow: it can become a “carbon sink,” drawing down carbon dioxide from the air and fixing it in the plants and soil, mitigating the significant amount of emissions that come from the beef cattle industry. 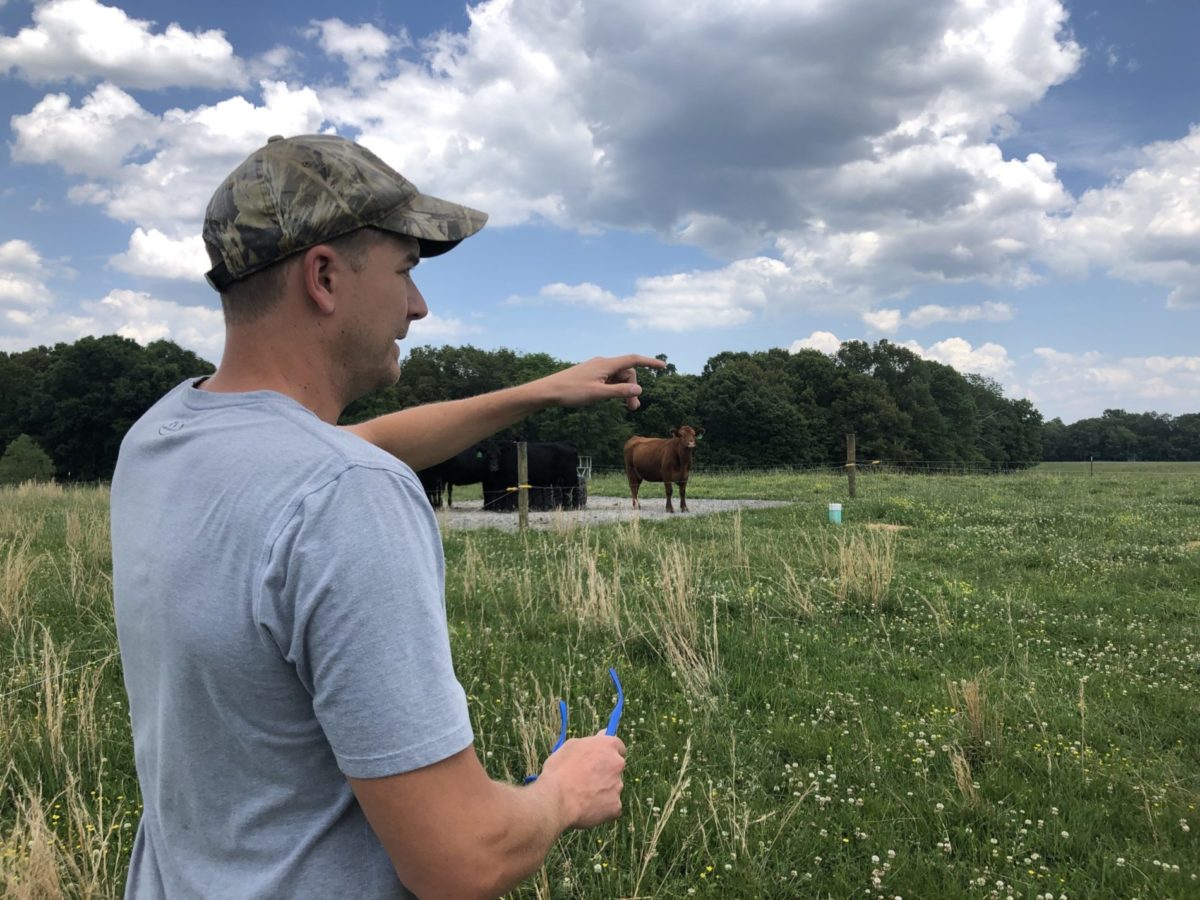 Cattle farmer Blake Munger points out some of the wired fencing on his farm in Calloway County, Kentucky.

Yet scientists and climate advocates also say much more needs to be done with the world’s food systems to help avoid disastrous climate change, including a topic that’s become politically charged at times — reducing meat consumption.

“It’s easier to think that you have the solution by getting rid of it instead of being like, ‘How can we make it where it’s actually beneficial?’ If farmers in America had productive farm ground that was not taking but giving back,” Munger said. “This [grass] is pulling from the air free nitrogen. It’s putting it into the soil. I’m letting Mother Nature work here.”

As alternatives to meat continue to make market headway in the Ohio Valley and across the country, climate advocates and scientists see a need for both sustainable farming practices and alternatives to traditional meats to make significant headway in avoiding disastrous climate change. One well-known regional company has been cashing in on the protein alternatives coming onto the scene.

Dippin’ Dots Ice Cream’s specialty is often found in amusement and theme parks, zoos and museums: small pellets of colorful, flash frozen ice cream mix in bowls, with flavors ranging from “Ultimate Brownie Batter” to “ Banana Split.” But when the pandemic restrictions and closures began and dragged into the summer, Chief Development Officer Stan Jones said the company lost 50% of its business that year with those places shuttered. 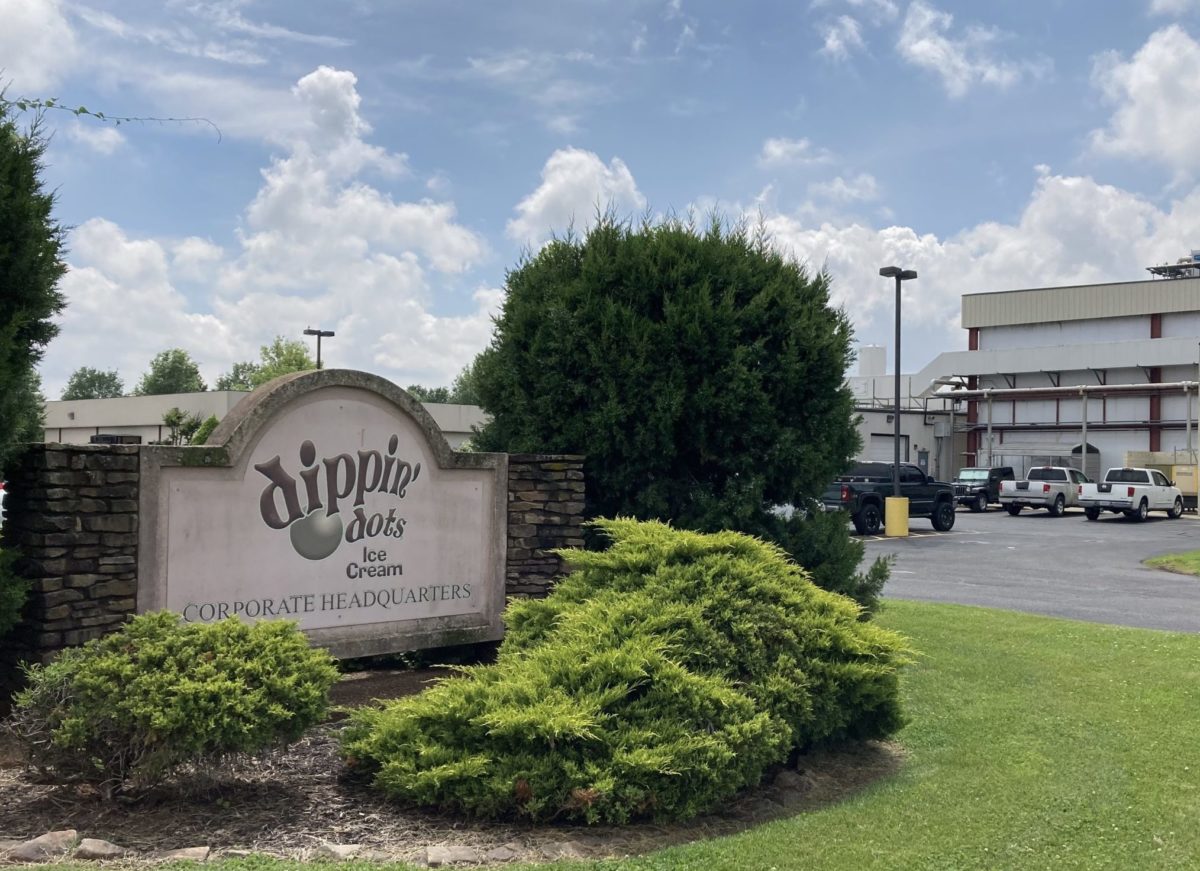 The headquarters for Dippin’ Dots in Paducah, Kentucky.

Staff was downsized, and spaces the company leased were downsized. But coincidentally, an investment made before the pandemic helped keep them from making further cuts. Some in the plant-based meats industry approached the company about using its cryogenic freezing technology to pelletize oils that could then be infused to make up the “fat” of plant-based proteins.

“Same process we use for our ice creams. We blend the raw materials together, and then we run them through our cryogenic processors, and then we package them,” Jones said.

Jones also sees a lot of opportunity for growth with their cryogenic technology, contracting with the more than $3 billion plant-based meats industry and the pharmaceutical industry, with the potential “to be as big as the ice cream side of our business.”

Although he thinks it’s years away from the possibility of alternative meats being on par with traditional meats, he believes the environmental and health considerations of meat weigh heavier for younger generations. 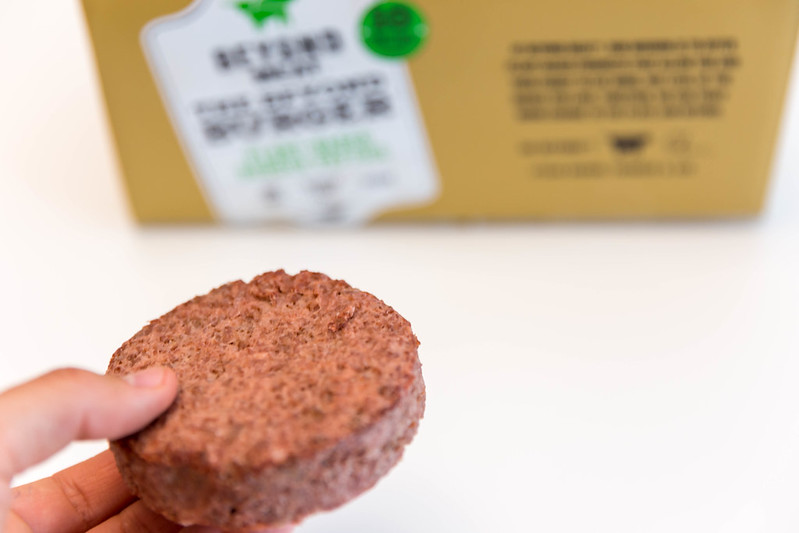 An alternative meat substitute made from plant protein, part of a $3B industry.

Farmers including Blake Munger aren’t opposed to Dippin’ Dots’ efforts to diversify their business, with the open market driving consumer demand. But for some cattlemen, whether to call plant-based products “meat” is another question.

Texas state lawmakers passed a bill earlier in May banning the use of the words “meat” and “beef” on the labels of plant-based food products. Several states, including Kentucky, have already passed laws requiring different labeling for alternative protein imitating meat that doesn’t come from animal sources.

“It’s not my job as a government official to tell companies what to do, except when it comes to making sure that consumers clearly know the difference between meat that was raised on a Kentucky farm, versus an imitation that was put together in a factory,” said Kentucky Agriculture Commissioner Republican Ryan Quarles.

Quarles referenced as an example the recent ongoing battle between the traditional dairy industry and companies producing alternative products made of almonds, wheat, and other plants, and whether those can include the word “milk” in their labeling.

Whatever alternative meats are called, climate advocates and scientists see both sustainable agricultural practices and alternatives to traditional meats as necessary to tackle the growing threat of climate change.

Tim Searchinger, a senior fellow with the World Resources Institute, said the challenge facing our food system is to accommodate billions of new people coming into the world by 2050.

“People just have to appreciate the sheer magnitude of the challenge coming,” Searchinger said. “There’s just so many people eat so poorly that as their incomes climb out of sheer poverty, the demand for meat and milk is going to grow.”

He said beef, for example, is about five times more inefficient in its land-use than other forms of meat production, and about two-thirds of the “carbon for the world’s agricultural land is devoted to meat and dairy.”

Methane is a major climate concern in agriculture. While methane does not persist in the atmosphere as long as carbon dioxide, it is far more potent as a greenhouse gas. A recent report from the United Nations stressed the urgency of reducing methane, calling it “the strongest lever we have to slow climate change over the next 25 years.”

Because the demand for meat is anticipated to increase at least somewhat among the billions of new people expected in future decades, people in developed countries, including the U.S., that already eat a large amount of meat will need to reduce their meat consumption by 50% in the coming decades, he said. Reducing meat consumption here can stave off additional deforestation and carbon releases associated with the rising demand for meat abroad. 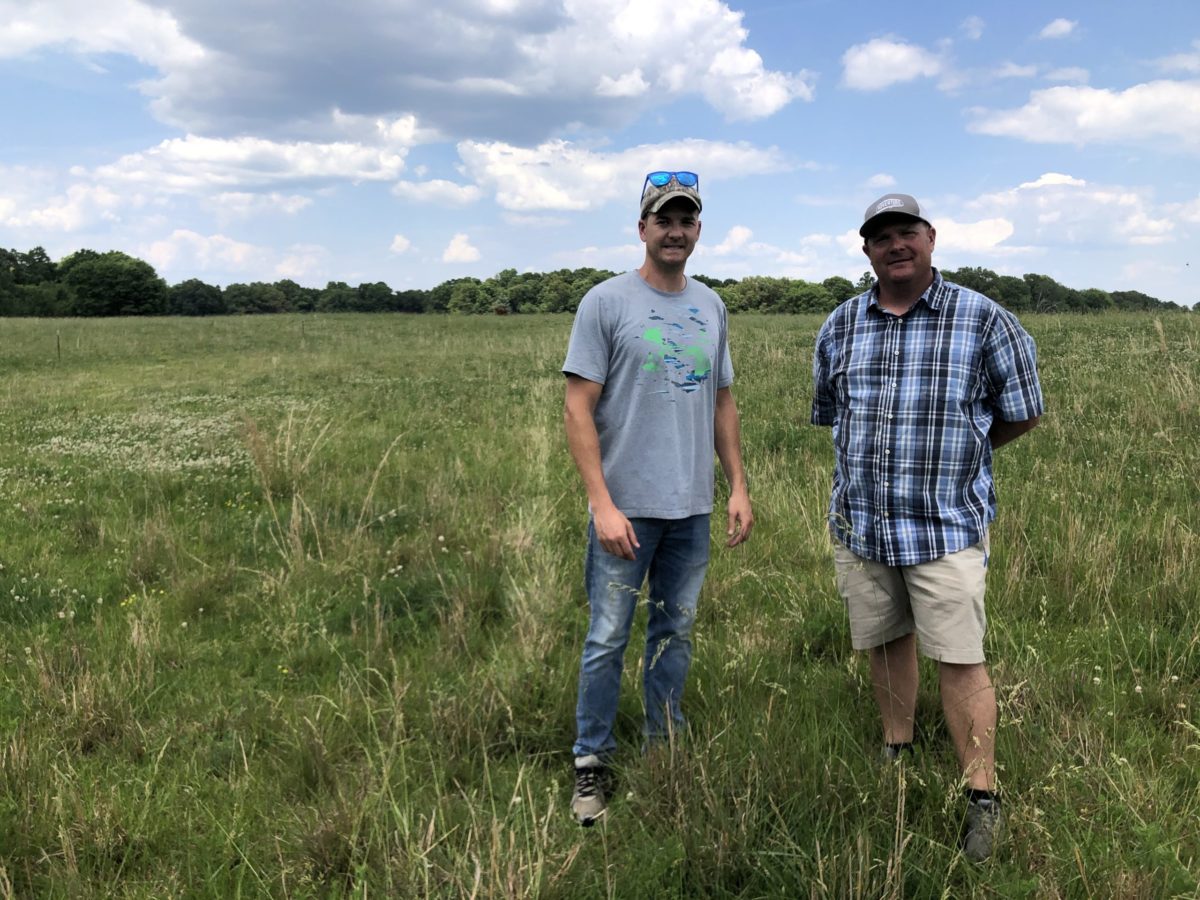 Yet that doesn’t mean beef producers will be going out of business anytime soon, Searchinger said.

“Only 20% of the people in the world eat a significant amount of beef,” Searchinger said. “If any of that other 80% eats even a little bit more, the world’s beef consumption is going to go up. So there’s plenty of market for beef producers as well.”

Another researcher studying food sustainability says the effects of climate change are already being felt by farmers who must deal with erratic and severe weather patterns. Karen Perry Stillerman, a senior analyst with the Union of Concerned Scientists, points to tackling the dominance that a few companies have in the meat industry as a way to make significant climate changes with food.

“I think it’s going to come from farmers, and all of us having more information and a fuller picture of what the situation is and how neither farmers nor eaters are being well served by this corporate domination system that leads to all of these problems,” she said, “and really coming together to find solutions that work for the farmers, for the environment, for workers, and for all of us.”