When the COVID-19 vaccine first became available, some states struggled to meet demand, including West Virginia. States administered nearly every dose in weekly shipments. But soon after eligibility expanded to everyone over 16, supplies started stacking up as vaccination rates declined.

Governors across the Ohio Valley pleaded with residents to get vaccinated during weekly press conferences as hundreds of thousands of appointments went unfulfilled. Then came the lure of free beer, ice cream and free gift cards.

Even Anheuser-Busch jumped on the bandwagon with promises of free beer for everyone 21 and older — if the U.S. reaches President Biden’s 70% vaccination goal by July 4th. But it doesn’t look like a round of beers is on the way. As of June 17, 52.7% of the U.S. population had received one dose.

But over the past month, states have upped the ante on their COVID-19 vaccine incentive stakes and are ready to pay up. Kentucky’s “Shot At A Million,” Ohio’s “Vax-a-Million” and West Virginia’s “Do It For Babydog” (we’ll explain that one in a moment) are all contests with million- dollar prizes and full ride scholarships open to anyone who has received at least one shot. 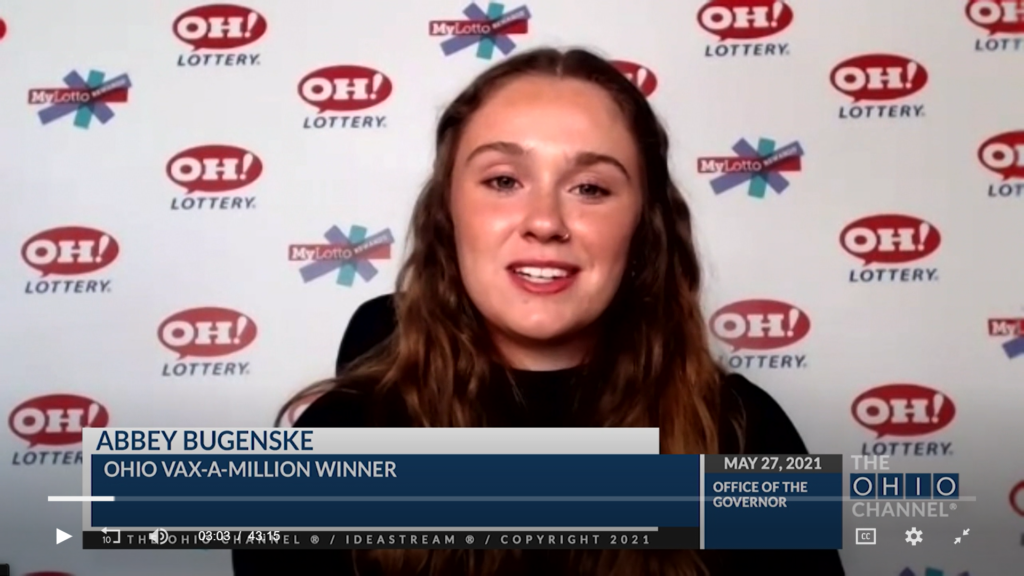 Although millions of people have signed up for these states’ vaccine lotteries, millions more who are eligible have not. Less than half of Kentucky, Ohio and West Virginia’s populations have gotten at least one shot, and health officials are anxiously tracking the arrival of more infectious coronavirus variants. As states push this last ditch effort with millions up for grabs, it might not be enough to convince 70% of the population to get vaccinated.

It started with Ohio’s “Vax-a-Million” contest — the first state to offer people who get a shot a chance at winning $1 million. There’s even a hefty prize for kids ages 12 to 17 — a full-ride scholarship that pays for tuition, books, room and board to any state university or college. 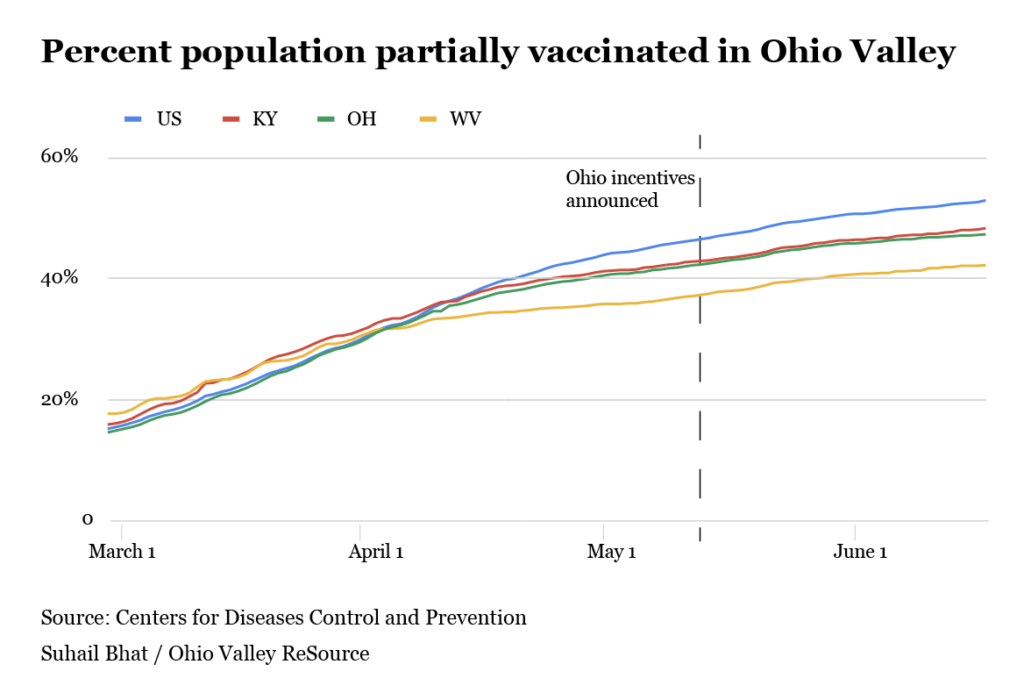 “With one Ohio “Vax-a-Million” drawing remaining, I urge Ohioans who have yet to get the COVID-19 vaccine to get vaccinated and continue Ohio’s progress moving beyond this pandemic,” Gov. Mike DeWine said in a press release. More than 3.4 million people have entered the contest, but 5.3 million are eligible to sign up. 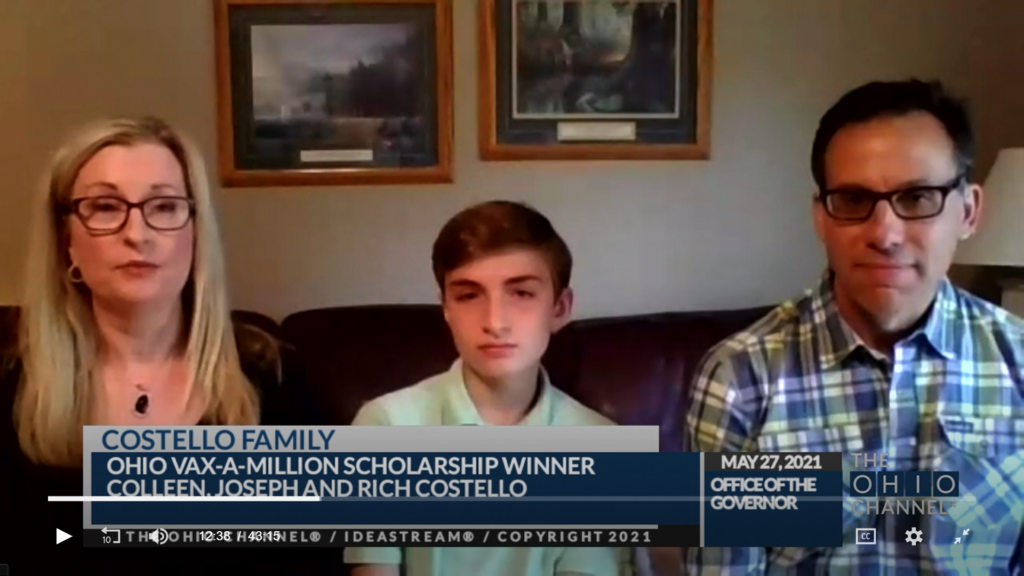 Kentucky is offering three $1 million prizes and 15 scholarships. Two weeks after the announcement, Gov. Andy Beshear said more than 414,000 Kentuckians had signed up. It’s hard to say how many of those were newly motivated to get a shot, because this number isn’t separated by new and existing vaccinations.

However, the Centers for Disease Control and Prevention’s vaccination numbers show that 71,331 Kentuckians received at least one dose of the vaccine from June 5 to June 17, compared with 83,686 in the 13-day period through June 4 when the state announced prizes and scholarships.

West Virginia is using a pudgy face to appeal to those who’ve yet to get a shot. 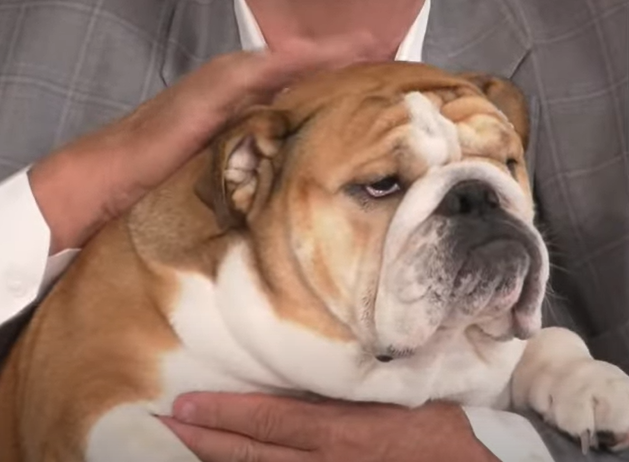 The one year-old bulldog is the star of West Virginia’s “Do It For Babydog” vaccine campaign. The Mountain State will award seven $1 million prizes, custom hunting rifles, shotguns and trucks, getaways to state parks and lifetime hunting and fishing licenses from June 17 through Aug. 2. People ages 12 to 25 may enter to win four-year full ride scholarships. A $1.588 million grand prize and a $588,000 second prize will also be awarded.

In Fayette County, Kentucky, 61% of the population has received at least one shot. It’s one of the top five counties with the highest vaccination rates in the commonwealth. Even with the chance to win a college scholarship, some parents say that hasn’t influenced their decision to vaccinate their families.

Nicholas Welker works in health care and got his shot as soon as he could. He did the same when vaccinations were opened up to kids over 12 and signed up his 13-year-old.

Welker didn’t know about the incentives. He thinks they’re a good idea, but he’s not sure they’ll make a difference at this point.

“You have your own personal reasons at this point for not getting it. And I don’t know that incentives are going to sway you any more,” Welker said.

Tanya Johnson also lives in Fayette County and has two daughters, 13 and 16. She said getting vaccinated is their choice.

“I don’t think getting a scholarship trumps what could potentially happen if something went wrong with vaccinations,” Johnson said. “So they are well educated girls, they are going to make a good decision if it comes to it.”

Johnson says she’s not a doctor and doesn’t think anything will happen. The CDC says the vaccines are safe.

“Mainly our decision was based on just trying to get back to a little normalcy,” Sims said. “Because nobody wants to stay inside anymore, especially when you don’t have to.”

Simone Greer also took her daughter to get vaccinated at Paducah Middle and heard about Kentucky’s new incentives.

“I haven’t had mine yet, but I’m looking into getting it probably next month, so it’s like ‘oh my kid can get a scholarship, I could get a million.’ So that may be encouraging me to go forward,” Greer said.

Dustin Wilcox of partner station WKMS contributed to reporting for this story.